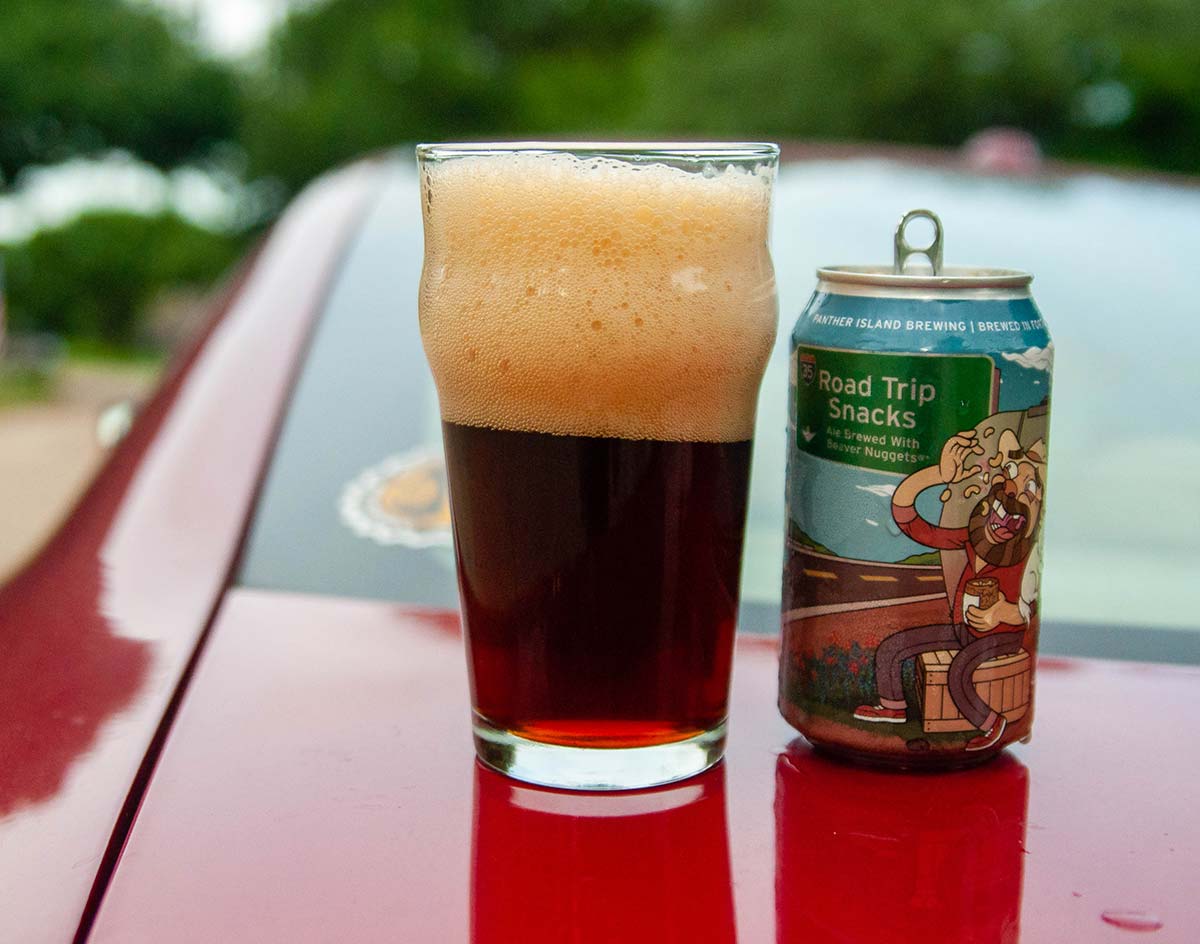 Perfect For Summer Vacation, The Fort Worth Brewery’s Beaver Nuggets-Infused Take On An English Brown Ale Is A Sweet Addition To Most Any Grilling Action.

This week, I sipped on Road Trip Snacks from Panther Island Brewing. 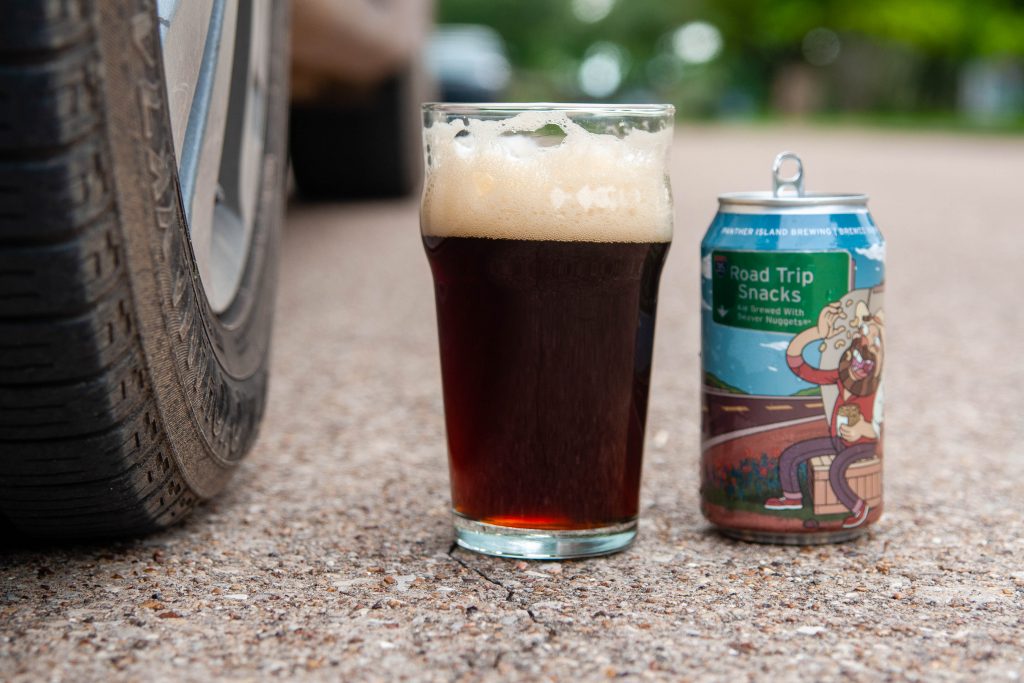 Summer is here — and, with it, road trips! Especially after last summer, am I right?

For me, this means two things: playlists and snacks.

The playlist thing? That’s easy enough. In my experience, All great road trips start with ZZ Top, and then anything goes after that.

But snacks are personal. While opinions vary widely here, nearly everyone I know can agree with beaver nuggets from Buc-ee’s. The caramel-coated corn puff snacks are so addictive, I usually have to have someone else in the family police my intake or I’ll kill a bag between towns all by myself.

Well, a little over a year ago, the good folks at Fort Worth’s Panther Island Brewing were munching on a bag of these delicious bites and decided they’d make a great addition to a beer. Thus, their Road Trip Snacks brew was born. The first batch of this an English Brown Ale was whipped up on a pilot system that was used to create small batch beers for the Panther Island taproom — and, when it sold out in two hours, the brewery knew it was on to something.

I’ve been wanting to review this beer since last year. But then the whole pandemic thing kinda got in the way and then the lockdown closed the taproom before I could get there to see what the fuss was about.

Fast forward a year and I tripped over this fascinating beer on the shelf of my local package store. I just had to try it out.

Will the beer be as addictive as the snack itself? Let’s see! 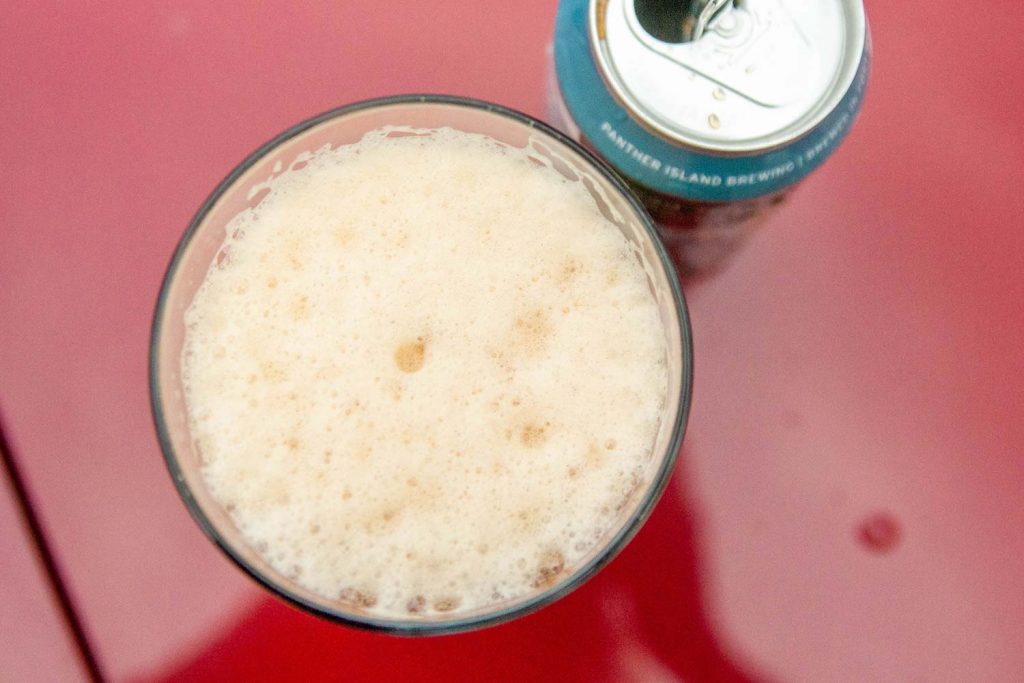 While Brown Ales have a long and varied history in England, the modern version is malt-centric and largely dominated by caramel flavors. The beer may also contain notes of toast, toffee, nuttiness and light chocolate. Medium to low bitterness balances the sweet characteristics of the malt. Light earthy or floral hop flavors are possible along with yeast-driven fruitiness, but should be subtle at best. Great examples of English Brown Ales should be medium-light to medium-bodied, and have medium to medium-high carbonation levels.

Road Trip Snacks pours a rich brown with mahogany highlights and a gorgeous, firm light tan foam stand. In the right light, it is possible to tell that this beer is quite clear — but, most of the time, the color is too dark to appreciate that clarity. The head, consisting of various-sized bubbles, is uneven and craggy, like the beginnings of a rough sculpture. It also has excellent persistence with enough foam left to cover the surface of the beer 10 minutes or more after pouring. I had better luck getting a proper pour by pulling the can from the fridge and letting it warm up on the counter for 15 minutes. If poured right from the fridge, it tended to be overly foamy and required a rest before finishing, even in an English imperial pint glass. 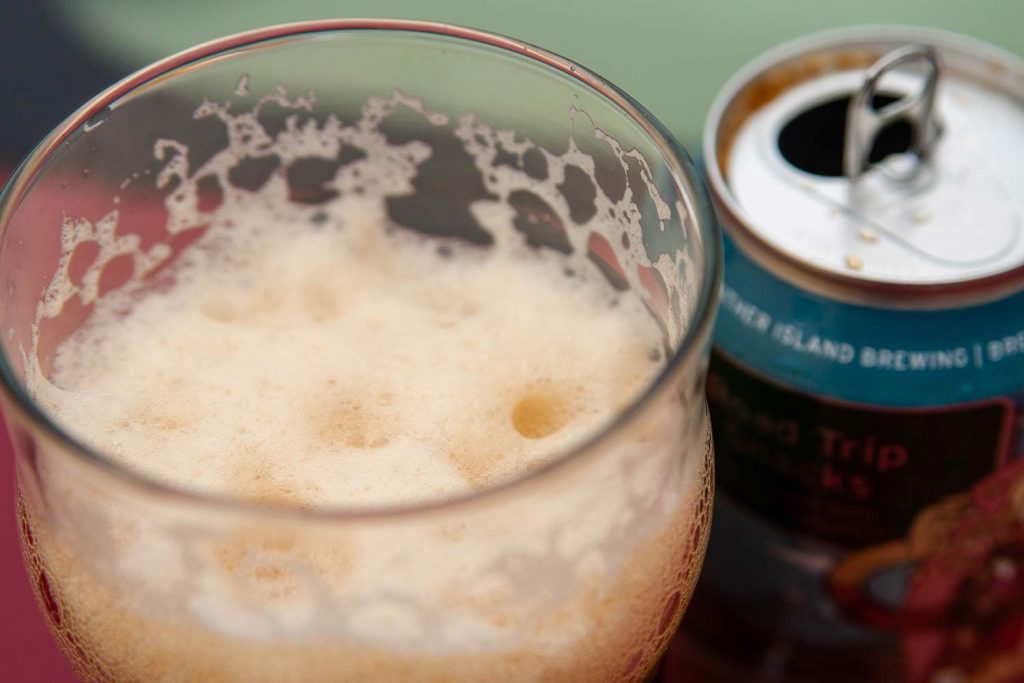 This beer is all malt on the nose with caramel the primary player. Toasty bits and toffee pieces can be found as well, but it really is a caramel showcase, which is somewhat to be expected considering that it’s brewed with a hundred pounds of caramel-covered corn puffs.

Road Trip Snacks again leads with the caramel when you get it in your mouth, although it’s no longer as dominant as it was in the nose. Now, the toasted flavors vie with the caramel for the spotlight, like maybe the dissolving corn puffs sunk to the bottom of the boil and got a toasting from the hot kettle bottom. While there is bitterness here, its earthy flavors blend seamlessly with the dark candy essence that is the center of the beer — so you really have to be looking for it. 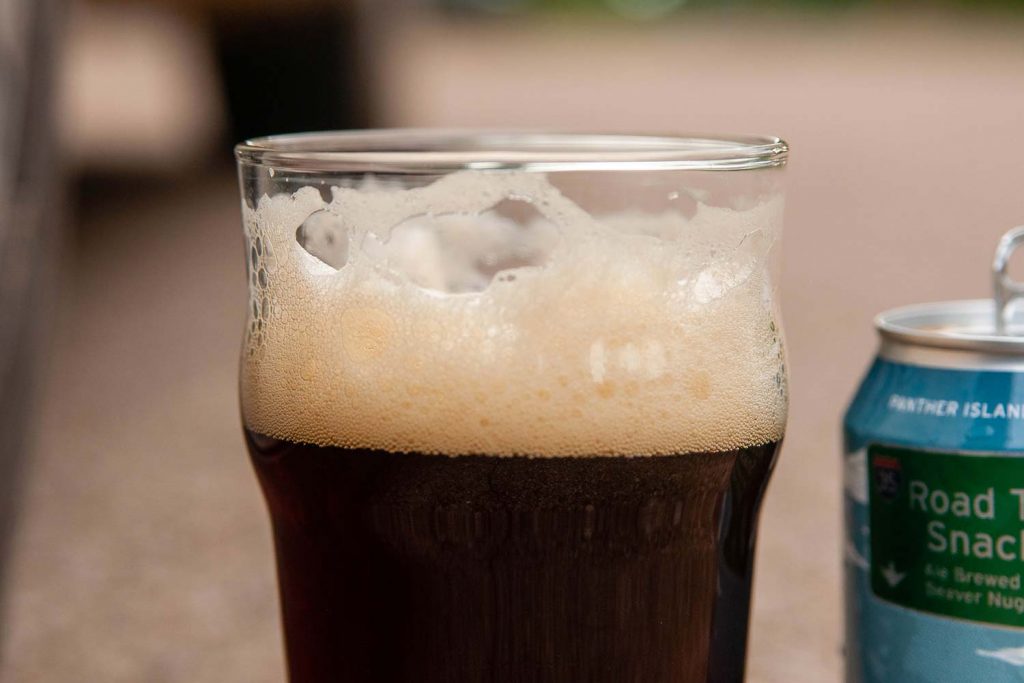 Belying its dark color, Road Trip Snacks is a medium-bodied beer, full and round but lacking the kind of thickness that one might be forgiven for expecting in a beer of this color. It has above-average carbonation, which contributes to a certain brightness and mild bite on the tongue. The finish is medium-dry and leaves a bit more sweetness behind than is typical in the style — but, again, it’s brewed with beaver nuggets, so this really shouldn’t be a surprise, should it?

Brown Ales are, by and large, great food beers — and Road Trip Snacks is no exception. This beer will play well with the caramelized exterior of nearly any red meat off the grill. Smoked meats will benefit from being served with this ale too, as the sweet from the beer should complement the smoke in the meats. I might even try using this beer in making a sauce for brisket or pulled pork, and then serving the beer with the sauce and meat combination. For dessert, try it with an apple pie to get something of a classic caramel apple blend. 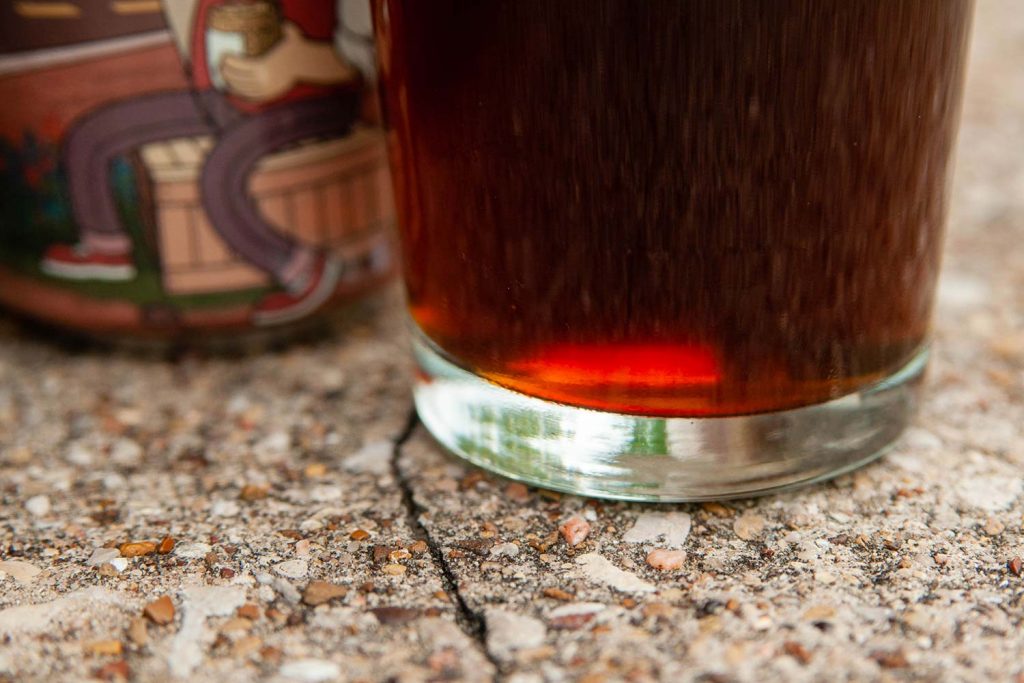 While I had my doubts about this idea when I first heard about it, Road Trip Snacks turned out to be a wonderful surprise.

As a rule, I’m not a fan of gimmicky combinations that appear aimed at making a splash off sensationalism over substance, but this beer works in spite of the gimmicky nature of including a near-universal favorite car ride munchy.

It is a bit too sweet to be a solid session beer for me, though. After two of them, I’m ready for something else. Personally, I think Panther Island could ease up some on the beaver nuggets a bit, and get a bit dryer finish that is easier to chain drink without adversely impacting the final product. But this is a small thing, really. I were looking to pair the beer with something savory off my grill, all that sweetness is totally fine.

The recommendation here is to grab a couple six-packs to enjoy at the end of your next great road trip to somewhere fun. Because, if your experiences are anything like mine, the beaver nuggets in your bag won’t make it anywhere near that far. 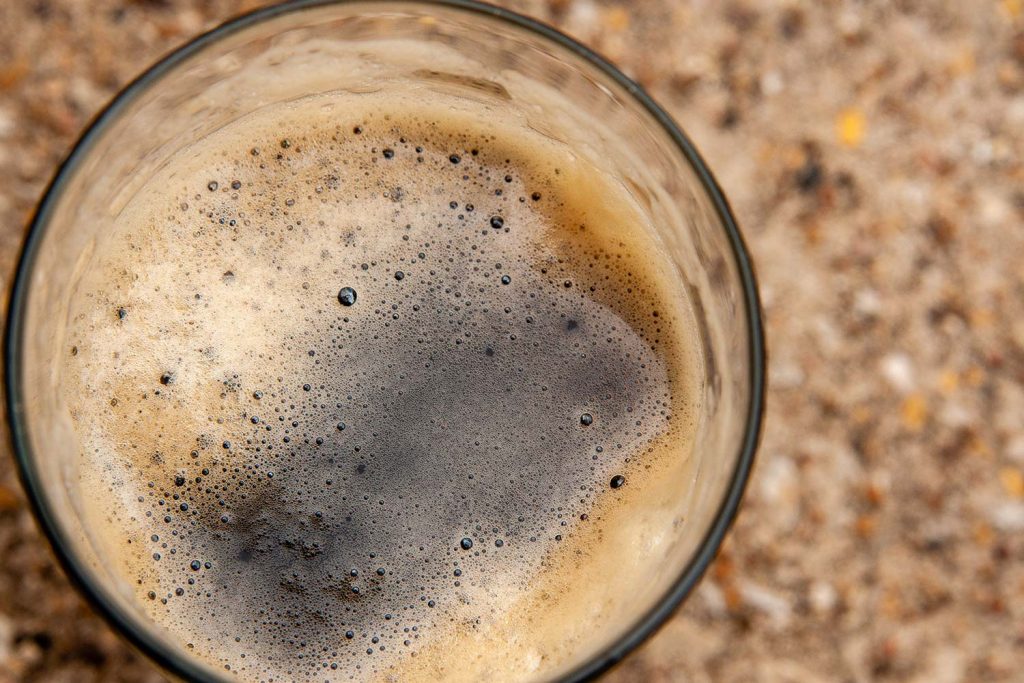