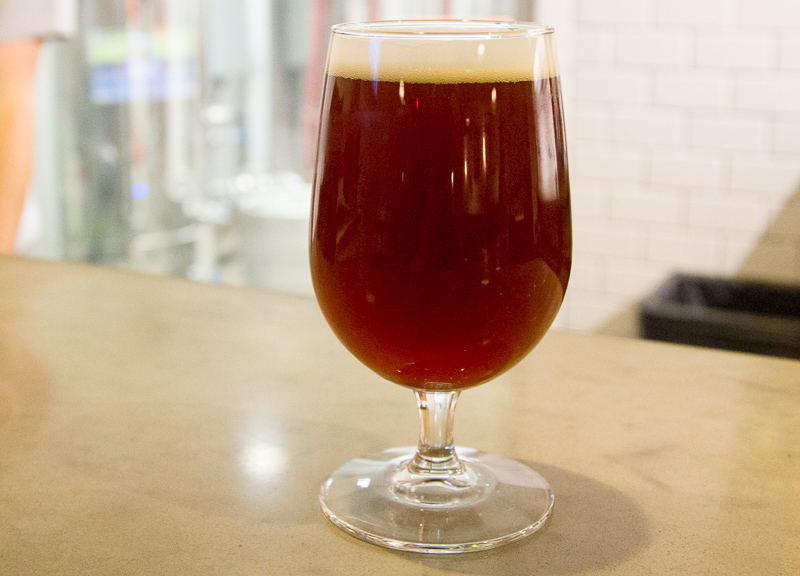 On Rotation's Alright Because Its Saved By The Belma.

This week, we sipped on On Rotation's Saved By The Belma.

Overview.
Have you visited On Rotation yet? I sure have. And you should, too. If you live in East Dallas, you're a beer fan and you haven't visited On Rotation yet, you should re-evaluate your life. OK, enough brash over-compensating bitchiness. On Rotation has been open since January 2014, almost one whole year. So why has it taken so long for us to review its beer? Well, I wanted to wait until the brewery was up and running on its beautiful, stainless steel system first. And I waited. And waited. And waited, for what seemed like forever. I asked On Rotation owner Jacob Sloan what was taking so long for them to crank out some brews on their new system, and he alluded to the fact that there were some loose ends that they had to tie up dealing with permitting and electrical something or other. Hmmm. Sounds like bureaucracy, red tape and city bullshit to me. (My words, to be clear.)

But now it's on. Saved By The Belma represents the very first full-system batch through On Rotation's three-barrel brewhouse. This is a bitter, floral American Amber ale that does not suck.

One important note about Saved By The Belma is that it's a single hop beer. Do what now? It's not that complicated, actually: This beer uses the same hop all the way through the bittering, aroma, flameout and dry-hopping processes. Depending on when the hop is used in a beer, it can give up different sorts of flavors, bitterness and aroma.

If you're a homebrew fan, you may remember one of the wackier beers from 2014 Brew Riot in Oak Cliff, On Rotation's jalapeno saison. Yep, these are same people. And now they're in business with a 40-tap wall and a few house-made rotators.

Oh, and stay tuned for a review of On Rotation's jalapeno saison in the next couple months. Also, did you know that On Rotation is next door to Cane Rosso White Rock? You're welcome.

Background on American Amber Ale.
American Amber Ale is a style of craft beer most known for its color and malt profile. Amber ales range from more heavily malty flavor to lighter flavor. Hop profiles range from subtle all the way up to midsize, dry-hopped monsters. No, this style doesn't quite jive with IPAs; Amber ales generally are a bit darker than more traditional pale ales and IPAs. There are, however, Red IPAs. Wait, that's a thing? Yes. But let's not get way off in the weeds, OK? If you have ever drunk a beer with the word red in the name, then you're most likely drinking an amber ale.

Appearance.
Saved By The Belma pours a nice amberish-copper red sort of color. It has a moderate level of clarity. A super firm head tops the pour as I take my first sip, and the carbonation from the head provides a little bit of extra bite on the first sip. Lacing hangs around forever, clinging to the glass in and moving down the side of the glass at such a glacial pace, it might as well not be moving at all.

Aroma.
Let's not joke around here and call this a boring American Amber ale. Because it's not that at all. There's a sharp bitterness on the nose, a citrusy, bubblegum sort of strawberry note that Belma hops are known for. Belma is a relatively new hop varietal used in both bittering and aroma hop additions. It is a versatile player.

Flavor.
There's a slight bite on the tongue, and I suspect it comes from the rye malt. And maybe that's a personal thing with me and rye malt. I like rye malt in beers, so that's all A-OK by me. On a side note, I get a teeny, tiny sense of something metallic on the aftertaste, but it could just be my tasters interacting with the residual bitterness from this beer. How is this beer only 41 IBU? Dunno.

Mouthfeel.
Saved By The Belma lands firmly in the light-to-medium body range. There is a nice biting carbonation present throughout the entire pour. A smoothness coats my tongue, but not like some over-the-top American amber malt bomb. And that's the same with the sugar feeling, too; this beer lives on the drier end.

Overall Impression.
This is a solid first batch of beer brewed on On Rotation's new system. I am impressed with these guys so far, and I can't wait to see what they come out with over the next few years. Saved By The Belma represents a novel approach to hopping that I can appreciate. In case you skipped that part, this is a single hop beer. And there aren't a whole ton of single hop beers brewed in the Dallas-Fort Worth area. One hop varietal does triple duty in this beer, and I think that's cool. While On Rotation does not yet have a set of standard year-round beers on its menu, you can probably expect to see Saved By The Belma appear on the tap list a few times per year. They've got a good thing going with this beer. Another round, please. Cheers. 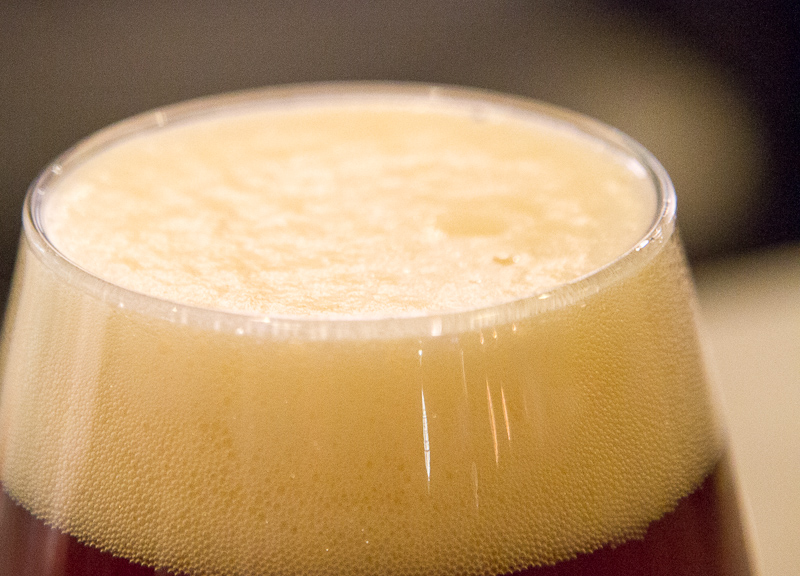 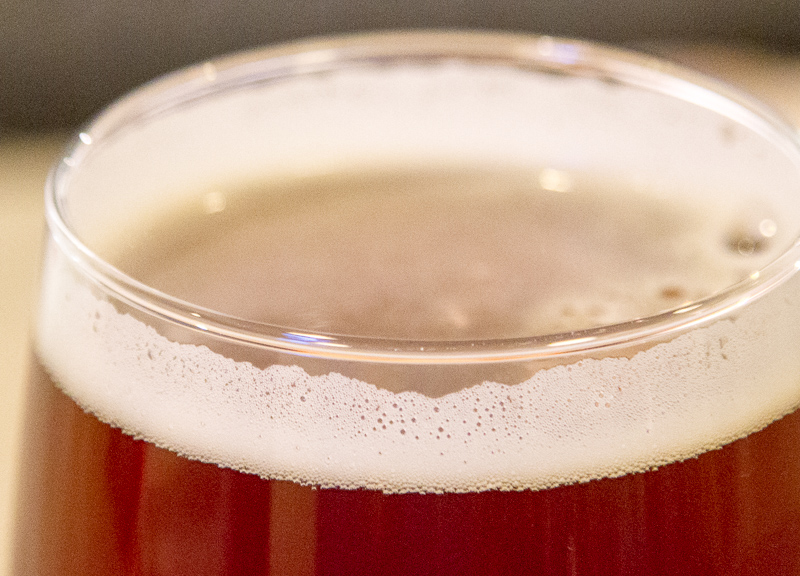 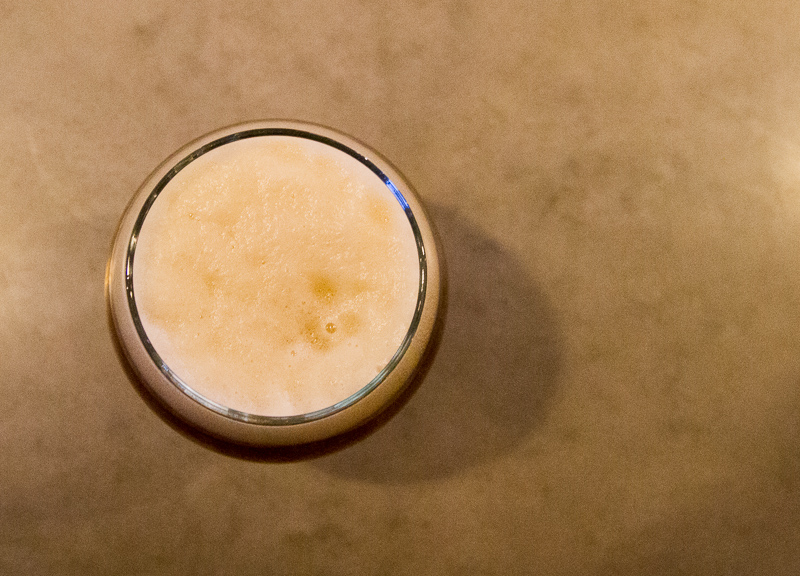 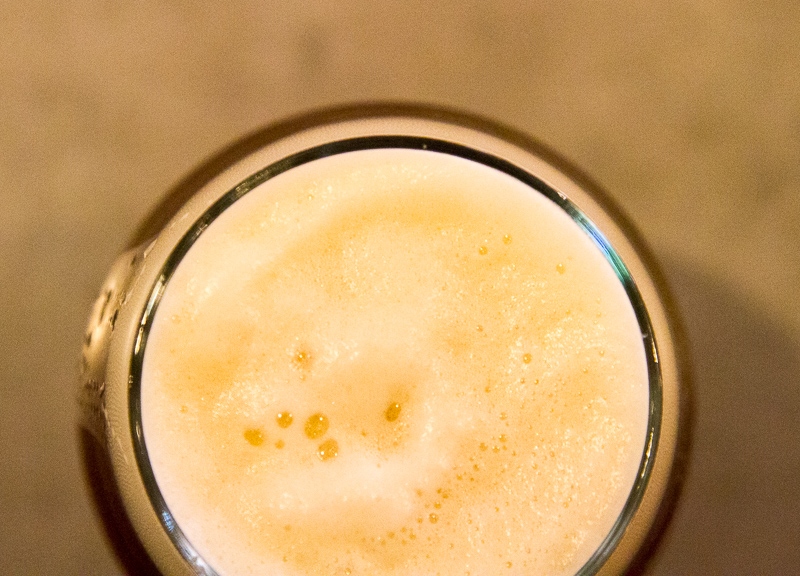