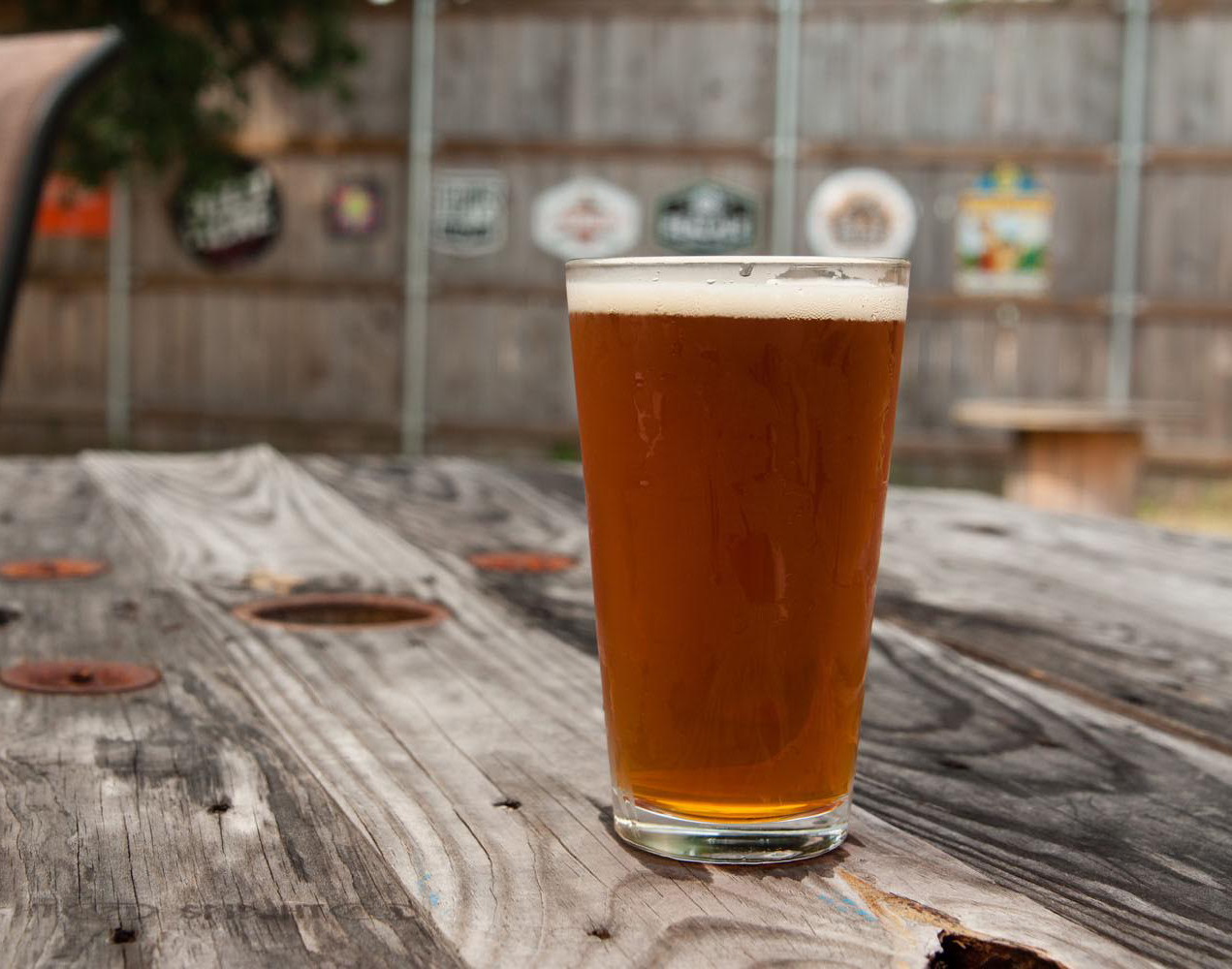 New Main Brewing Co. Taps Into Crossover Appeal With Thundersnow — A Stout With Enough Flavor To Win Over Even The Most Ardent Fans Of IPAs.

Overview
New Main Brewing Co. — like so many of today’s small craft breweries have — started back in 2012 with a home-brew kit, and just a little over a year ago, it began commercial production in Pantego, Texas. This was my first direct contact with New Main beer, although I’d heard nothing but good things about it from knowledgeable beer friends for some time. My initial thought for this trip was to review 303 ESB, a style I love that doesn’t get a lot of attention in the U.S. craft beer scene. Apparently, it’s a favorite with New Main regulars, because they kicked the last available keg of it the night before I got there. So, with Plan A out the window, I decided to go with the most intriguing option on the menu — the white stout that New Main calls Thundersnow. 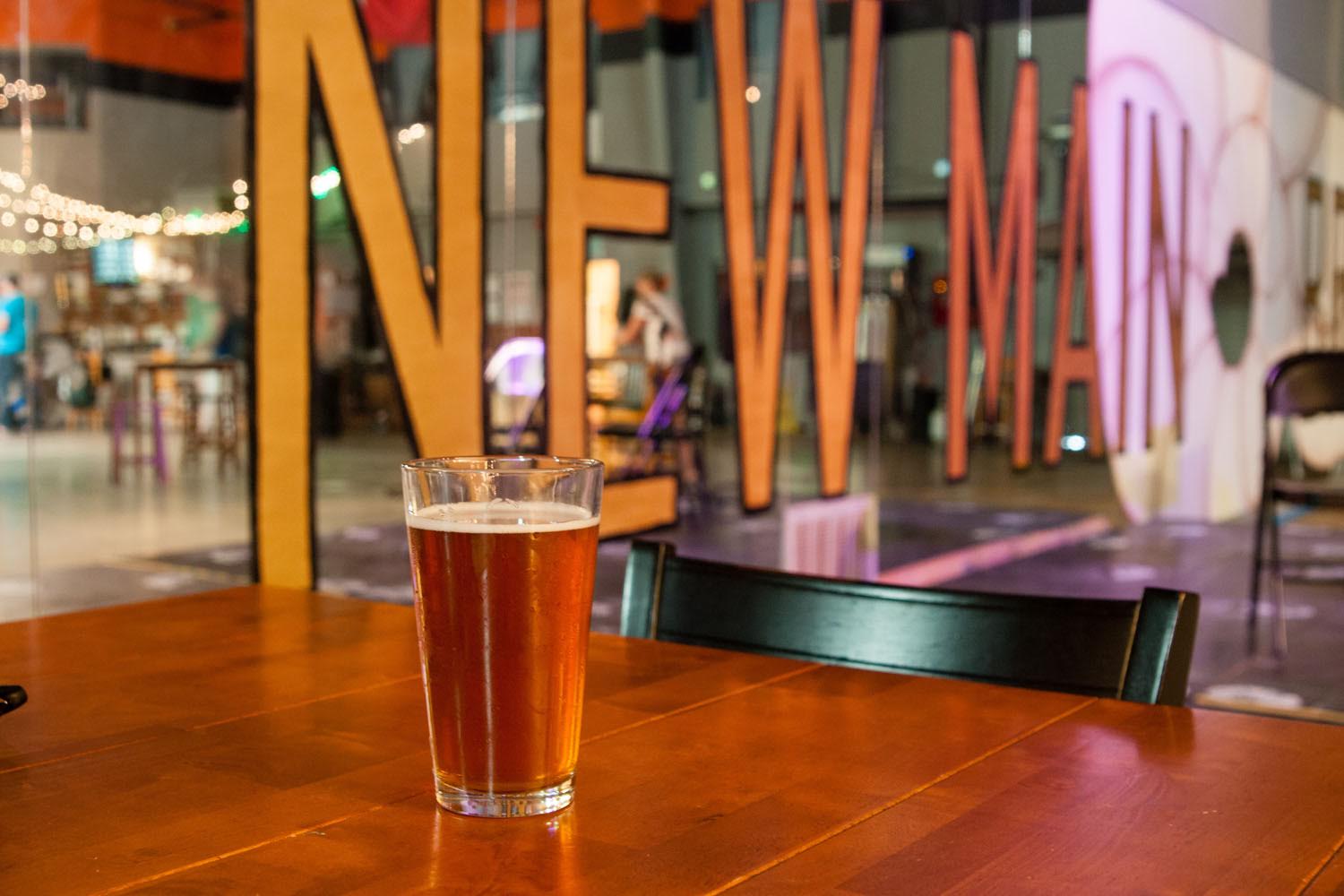 Background on White Stout
If you like to be the cool kid in your crew who turns everyone on to the next to big thing, white stout might just be your chance. The earliest reference I can find to someone brewing this style of beer is 2010,  and as beer styles go, that is about as ground floor as it gets.

White stouts are brewed without the dark roast malts like Black Patent or Chocolate malt that give traditional stouts their dark brown to black hues. In place of those, this beer is brewed with a number of adjuncts (a term that has gotten a bad rep but basically just means anything that isn’t malted barley) like oats, wheat, coffee, chocolate and lactose. These things all impart strong aromas, tastes and mouthfeel without manipulating the color of the brew.

To a certain degree, this also takes us back in time to when stout was used as an adjective rather than a noun. At one point, a couple hundred years ago, people ordered stout porters and stout bitters and stout any-other-style-of-beer you can think of. Essentially, stout was just the universal way to say “strong.” In the time since, thanks to Arthur Guinness, stout has become its own style synonymous with dark ale — but nothing really requires it to be that way.

Appearance
I ordered a pint, not really knowing what to expect. I’d read descriptions so I had something of an expectation, but I have to admit to being a bit turned around when my bartender set down a glass that looked more like an Imperial IPA than what I’d always thought of as a stout. In my shaker pint was a liquid with a deep orange-gold color and a touch of murk to it. There was visible weight to it, as well — on top was a solid head of foam made up of fine, paper white bubbles. The word firm came to mind in describing the whole picture, but an attractive picture nonetheless. 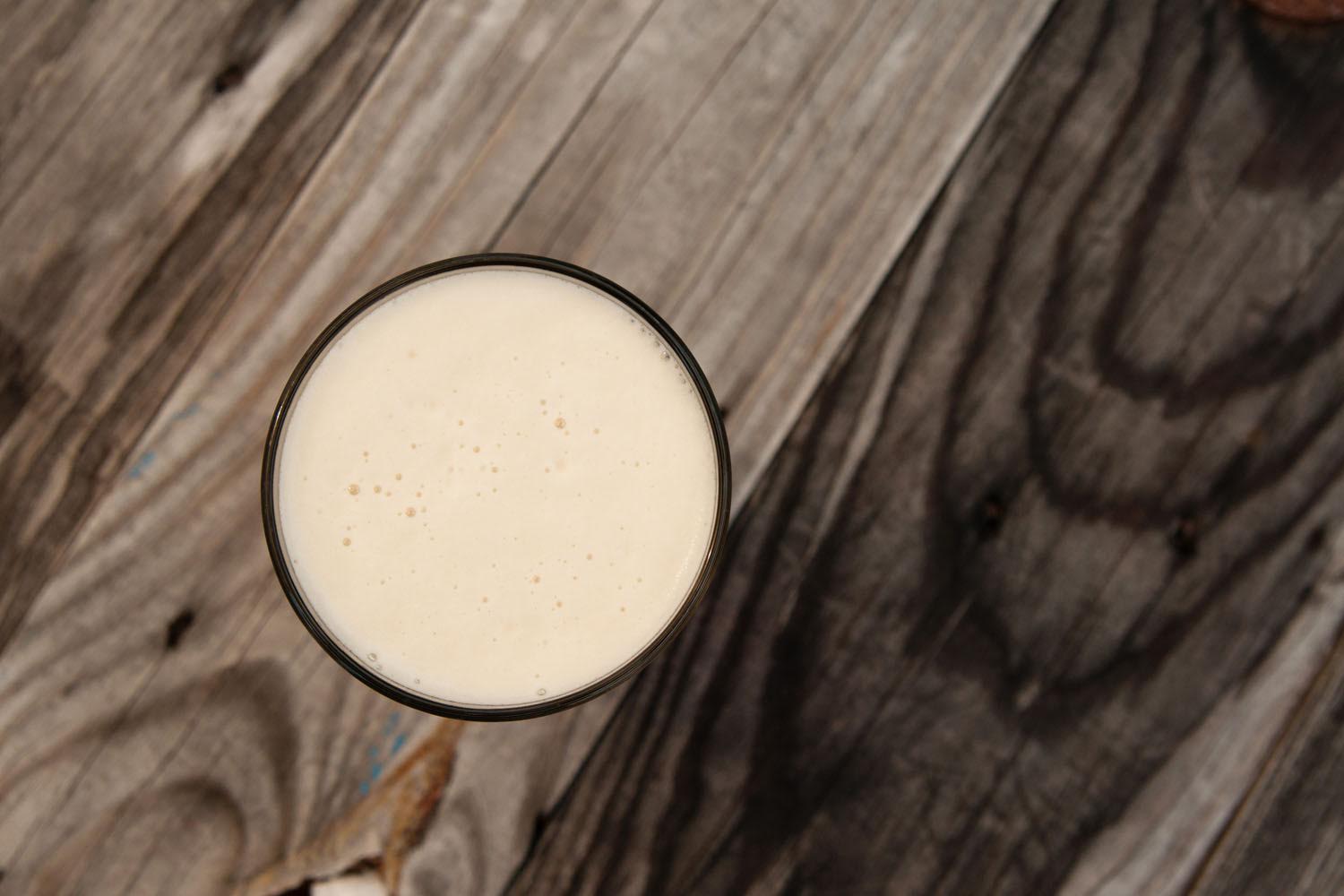 Aroma
Wow. We taste first with our eyes, as we are a sight-dominate species, so what we see tends to set an expectation. I read the description on the board, so I knew there was roasted coffee and chocolate in my glass, but in the time it took me to walk back to my table, my eyes had worked with my brain to convince me I’d get grapefruit and pine. Talk about a shock to the system. The roasted coffee is what you notice first in the Thundersnow, as it reaches out from the glass like those hidden monsters lurking in the dark of your favorite haunted house — sneaky and subtle, but absolutely intent on sucker punching you. Hiding under the coffee is a bit of nice dark chocolate, more bitter than sweet, though. If you close your eyes and breathe in, you will fully experience a black beverage any Irishman would applaud.

Flavor
Thundersnow tastes like a glass of iced coffee with a side of coco without the straw and cheap-ass plastic cup. The dominate flavor comes from Jenna-Rosity Coffee beans, which are roasted and sold by the gift shop residing on-site at New Main. The flavor is big, with coffee notes leading, but followed by subtle highlights of bittersweet chocolate. The finish, for me, was clean and shorter than I expected. 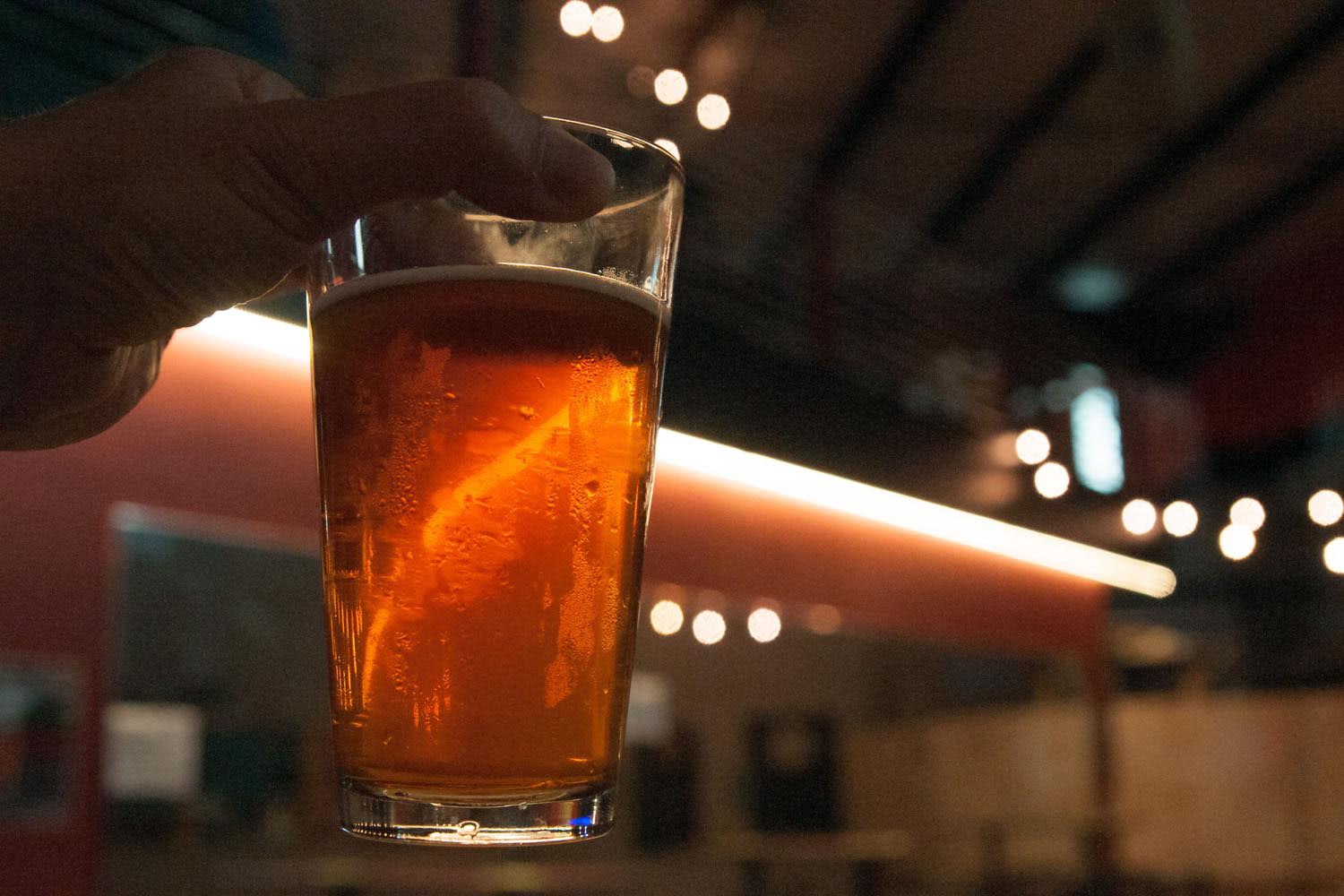 Mouthfeel
This beer is silky smooth. It very much feels like a milk stout brewed with oats in the grist. In my notes, I have words like “coating,” “creamy” and “full.” This beer either has a lot of fermentable material left behind from using a low-attenuation yeast, or uses lactose sugar — the same thing used in milk stout — which isn’t fermentable by brewer’s yeast. Either way, this is a full-bodied beer.

Pairing
My house is one of those places where we do breakfast for any meal of the day. Me being me, I brew coffee if I’m going to have breakfast, even if that breakfast happens to be at 9 o’clock at night. By the second or third swallow of this beer, I was thinking I wanted two eggs over easy with bacon and hash browns. Stouts have long been joked about as a breakfast beer but this one really cries out to be paired with that first meal of the day. Dessert is the other place I want to go with this — a warm piece of pie or chocolate cake. Put simply, Thundersnow will easily take the place of a cup of coffee that would have otherwise been your beverage of choice.

Overall Impression
I walked into New Main planning to review something else, but as fate would have it, I ended up with Thundersnow. To be honest, I can’t say I’m disappointed. This beer is no one’s consolation prize, and I’m actually happy that I ended up with it. Counting this style, I’ve had about three new beer styles in the last 10 years – the other two being a black IPA and a hazy IPA. For all the innovation going on in craft beer these days, new styles that catch on enough to be brewed far and wide are still on the rare side. Thundersnow meets that criteria.

I know a lot of folks with a dark beer bias that I think would like this (most of them like iced coffee, after all), and despite its potentially off-putting color, Thundersnow should bode well with the go-to stout drinkers. I can even see a few hop heads getting on the bandwagon too, as there is plenty of bitterness here, if not big hop flavor. The only thing I would change, is to have been served this on Nitrogen — Thunbdersnow nearly feels like a Nitrogen beer as it holds the tight, long-lasting head and creamy mouthfeel. I don’t often suggest moving a CO2 carbonated beer to Nitrogen, as I think it is overused in beer these days. However, this already-delicious beer might just improve on Nitrogen.

Now, all I need to do is find a place closer to home that serves Thundersnow.