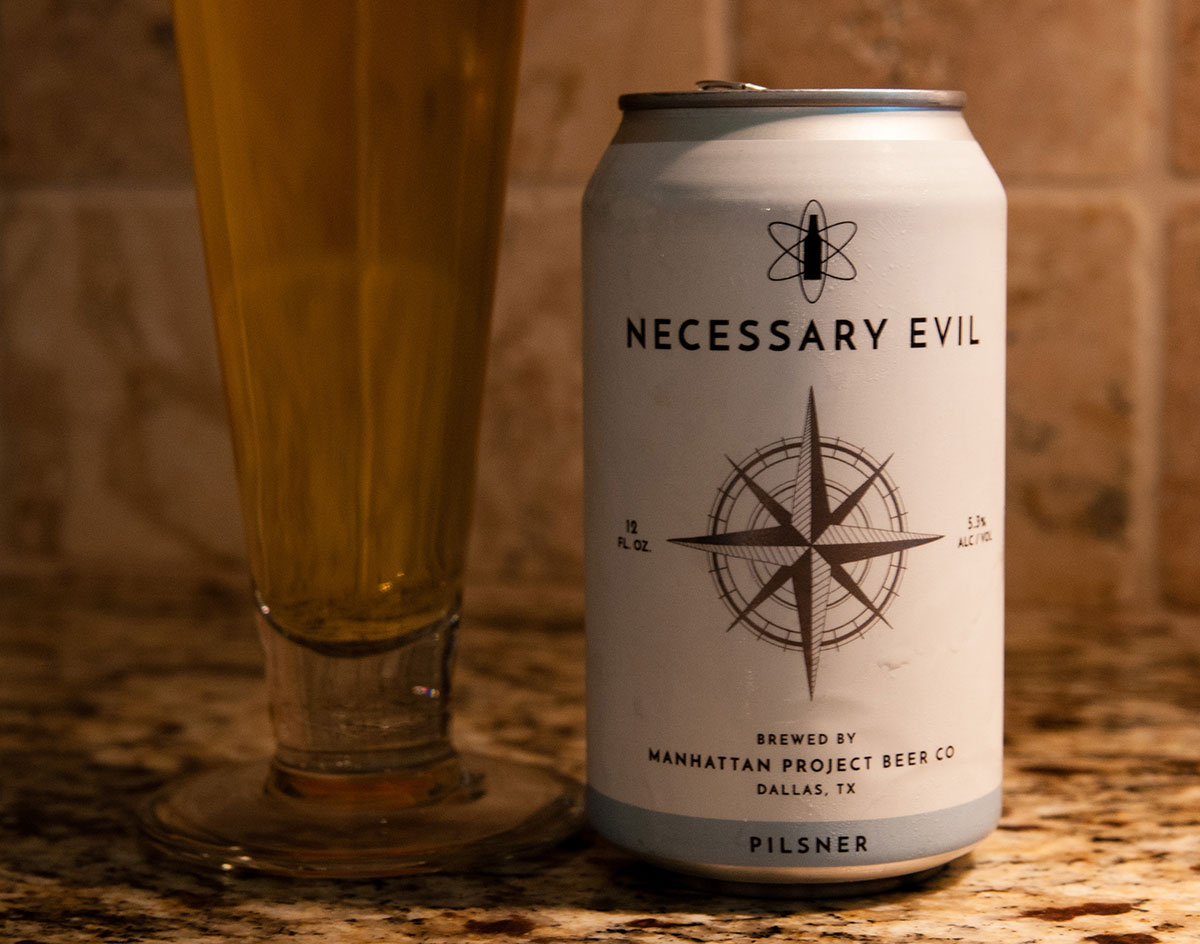 Manhattan Project’s Necessary Evil Is A Straight-Up Pilsner, Which Is The Charm Of This Perfect All-Day Sipper That Pairs Well With A Wide Variety Of Foods.

This week, we sipped on Necessary Evil from Manhattan Project Beer Company. 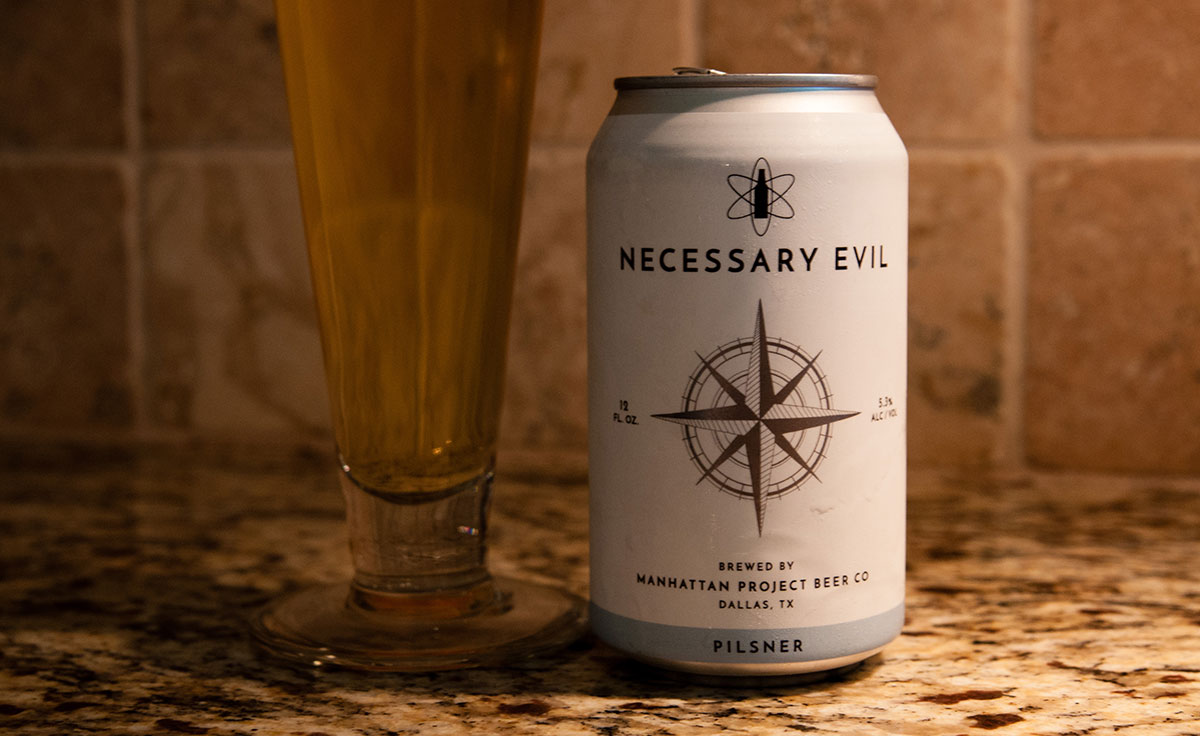 Overview.
Manhattan Project Beer Company is a current favorite local brewery of mine — and what’s crazy is this company doesn’t even work out of its own place yet.

Instead, the brand had been leasing time at Bitter Sisters Brewing Company in Addison while getting its own permanent home lined up in the Trinity Groves area of West Dallas, which Manhattan is slated to move into this fall. Don’t worry: If you haven’t heard of this brewery, you’re not alone; but that is quickly changing. While Manhattan has been around for several years at this point, it only started canning its brews last fall, thus making its beer available to a wider selection of area beer drinkers.

A quick look at the brewery’s beer menu will show you a lineup dominated by beers in the IPA family, although there is some serious variety even there, with a number of other fun styles tossed into the mix to prove that these guys aren’t one-trick ponies.

I’ve personally had the pleasure of sampling most of the beers listed, and I look forward to trying the rest in the very near future — hopefully in the taproom. 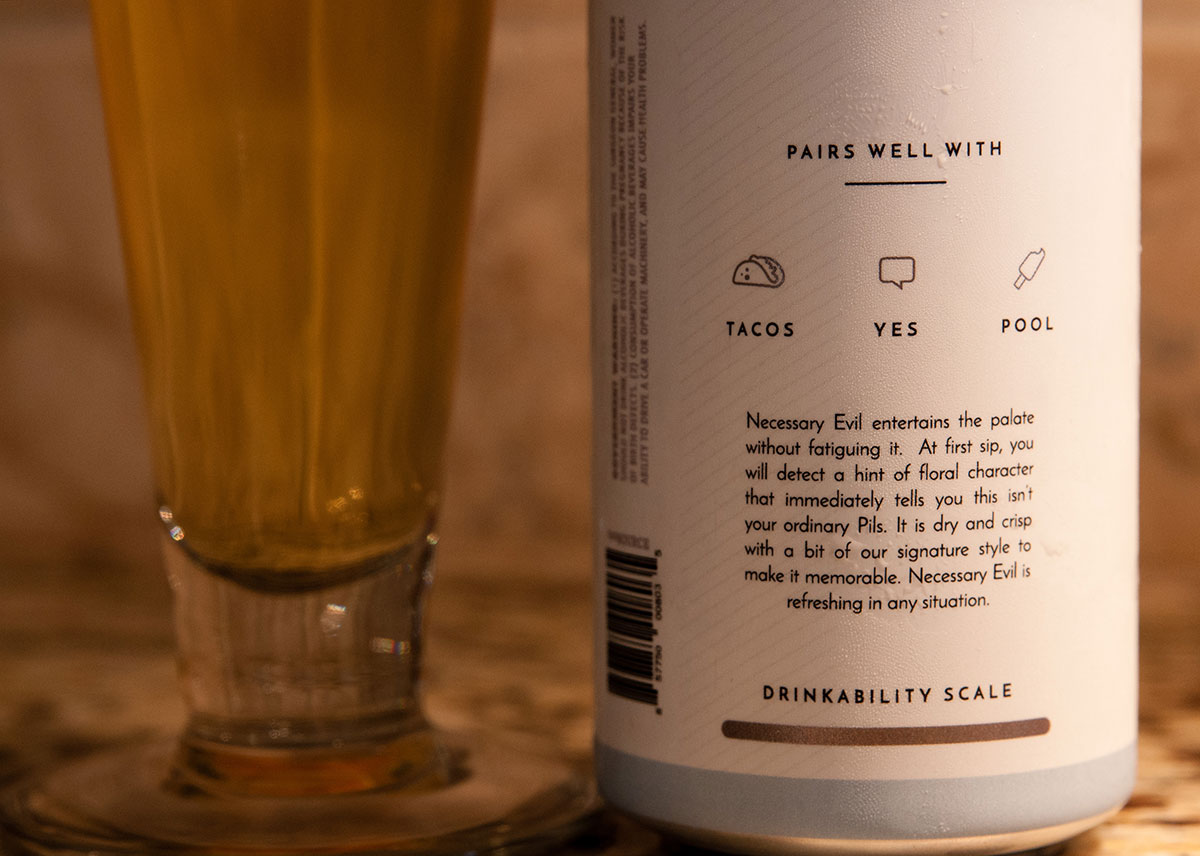 Background on Pilsner.
Pilsner is a style everyone’s heard of, but few have enjoyed for real. Nearly every major macro beer brand you have ever heard of claims its offering to be a pilsner (think Budweiser, Coors, Miller, etc. here). And, to be sure, the Pilsner style, or others descended from Pilsner, indeed account for better than 90 percent of the beer consumed worldwide. However, painting all that beer with the same broad brush would be a mistake. A true, all-malt Pilsner brewed in accordance with the Reinheitsgebot (beer purity law of Germany) bears about as much resemblance to American macro beer as college does to kindergarten. Both are educational experiences, but the former is deeper and more complex by an order of magnitude. Named for the town of Plzeň, located in Bohemia which is part of the modern-day Czech Republic, the style was first brewed there in 1842. Pilsner Urquell, meaning “original pilsner”, is still brewed at this site today. When the style was first produced, it was a revelation; beer was generally brown and murky beforehand. Word and demand spread quickly, soon forcing breweries in Germany and Belgium to copy the style. The rest is history.

Appearance.
Necessary Evil screams true Pils from the first splash in the bottom of the glass, pouring a pale gold straw with a bright white head that races to the top of the glass in a valiant attempt to get there before the last of the beer spills from the can — and, if not poured correctly, winning. This beer is brilliantly clear, so much so that it is possible to hold the can against the backside of the glass and read it through the beer. The fine white bubbles form a tight head an inch deep at the top of the glass that sadly, I wish lasted longer. A steady stream of bubbles continue to rise from the bottom of the glass all the way through the last swallow. This beer is just seriously pretty. 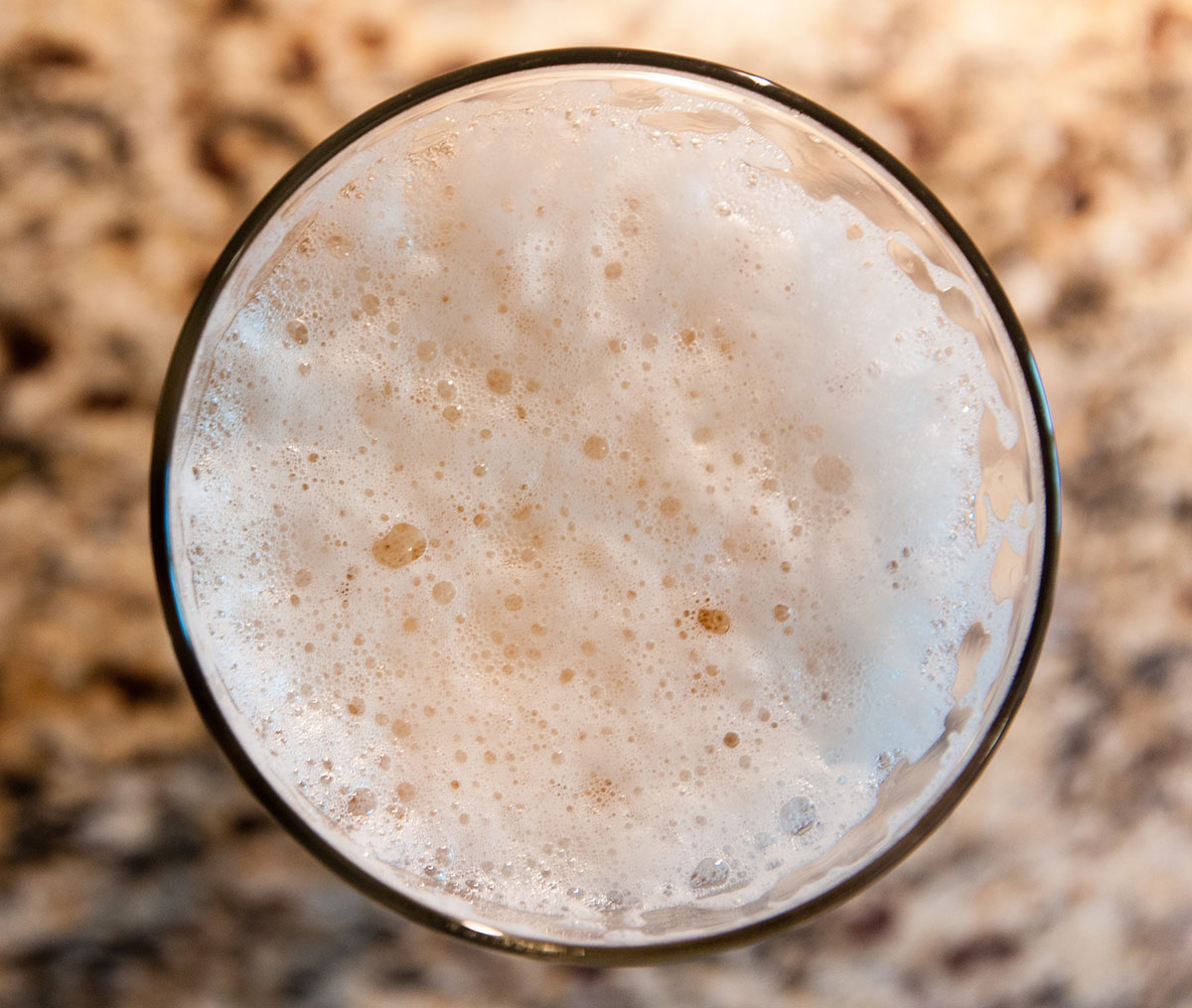 Aroma.
My first thoughts, as I take a sniff, are crisp, clean and lightly floral — as though I’m breathing the early spring air in the German Alps. There is a mild sweetness to it, hinting at bread dough or crackers. This is all malt and hops, with no fruity or spicy notes from the yeast to mask things. It is just about as clean a fermentation profile as you can find in the brewing world, which is very hard to do, but nailed here wonderfully by the folks at Manhattan Project.

Flavor.
This is where the truth lives in the Pilsner world. A good one should be delicate without being thin, offer full flavor without being heavy-handed and provide a complexity without resorting to spicy or fruity elements. Necessary Evil is all of this and more. There is just enough bitterness to balance things out while retaining a brilliant background note, allowing the malt and the hops to shine. 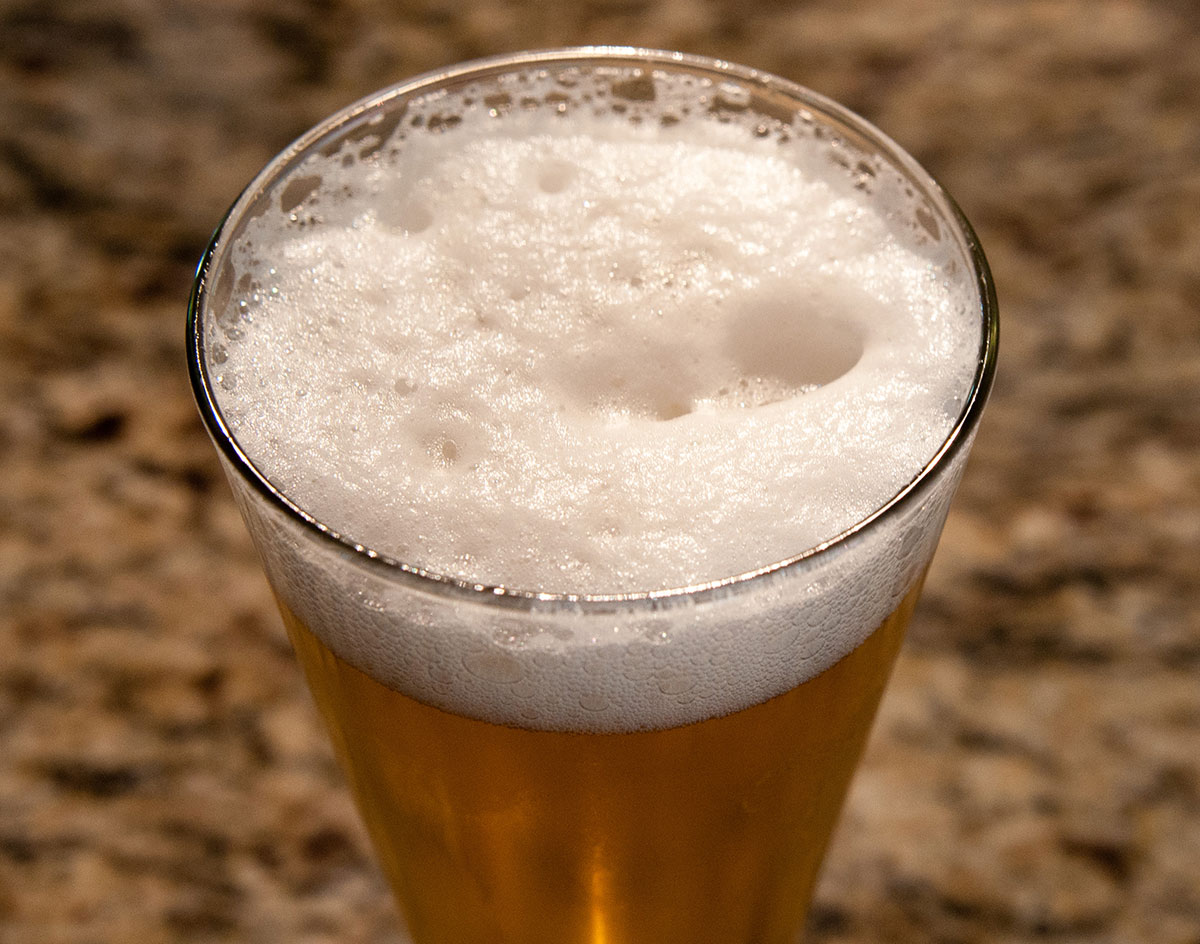 Mouthfeel.
Necessary Evil hits your tongue with a pop of flowers and a bite of carbonation, with the former eventually giving way to grainy sweetness and the latter sliding off to grip either side of your tongue and scrubbing your mouth clean of any lingering fat, salt or grease. Initially, it is crisp to the point of being sharp. But that quickly turns into the bready semi-sweetness of the malt. This beer fills your mouth, but does it without overwhelming anything — including your palate.

Pairing.
A really good German Pils is a wonder with food, pairing well with a broad range of food cultures and dishes. I’m a huge fan of beer and cheese together, and this delicate, straightforward beer goes fantastically well with a smooth triple cream, where the lively carbonation of the beer works to clean up behind the whipped, thick consistency of the cheese. The low bitterness and partial sweetness of a Pils also makes for a great companion to traditional spicy Asian dishes of Thai and Vietnamese heritage, with the sweetness working to manage the heat usually incumbent in this cuisine. Closer to home, Pils makes a great mate for nearly any type of sausage, from a mild bratwurst to a spicy Chorizo or Andouille. If seafood is more to your liking, a cold Pils snuggles well with any shellfish (excluding scallops, which need something more delicate), as well as heavier fish, like salmon. Last but not least, one of the single best beer/food combinations I have ever enjoyed is a Reuben with a German Pils. 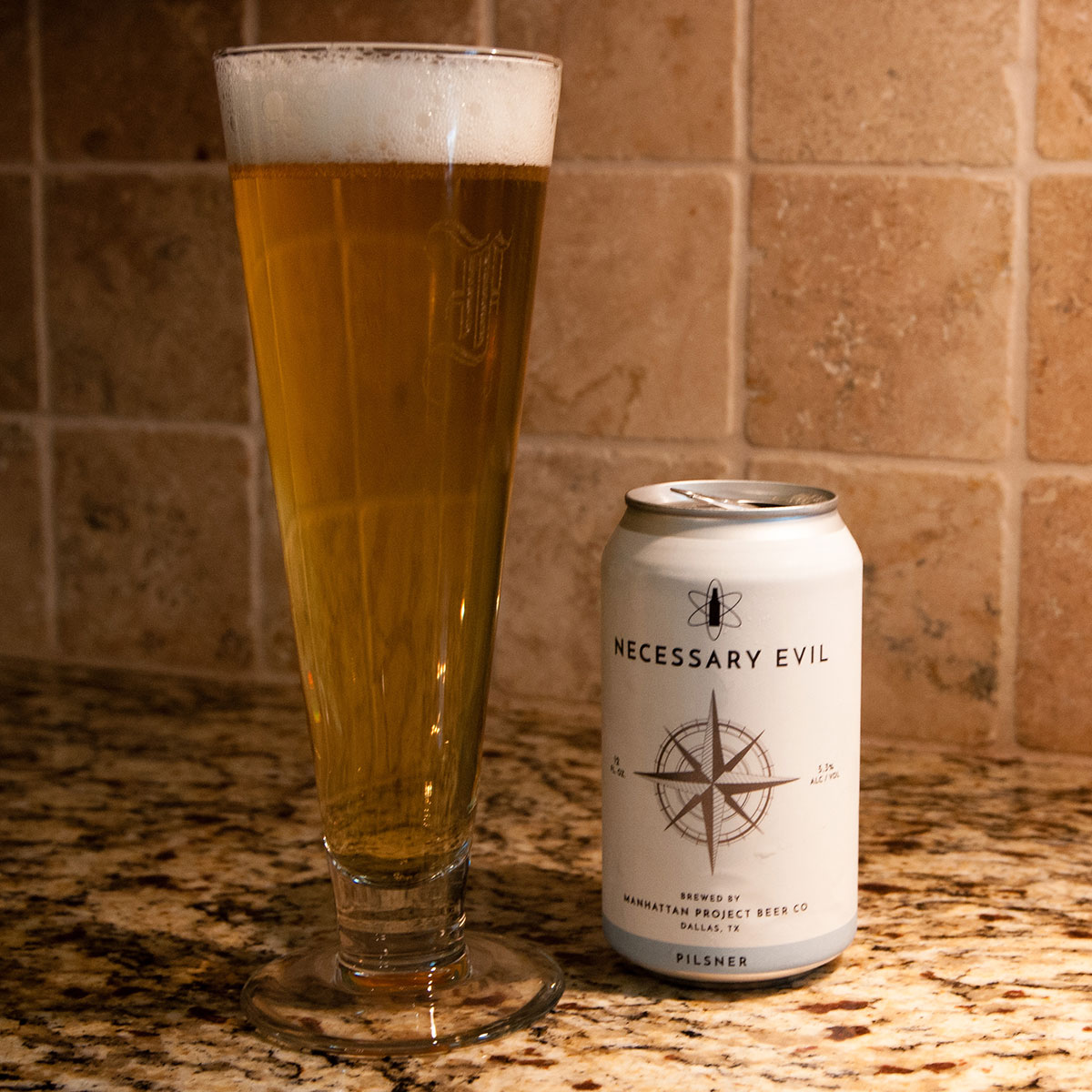 Overall Impression.
I have to admit that, for the last two decades, I’ve avoided Pilsners almost completely. Over the course of the last two years, though, that has changed. Beers like Manhattan Project’s Necessary Evil are the reason for that. This beer is bright and charming — and, at 5.3 percent ABV, it stays that way all day.

If I had to find something to complain about, it would be that initial sharpness as it hits my tongue. It is nearly too crisp, but even that is picking at nits. This beer pairs well with so many of my summer food favorites that it is nearly a universal beer from May to September. For that reason, Necessary Evil has become a constant in my beer fridge.

Oh, and I have to call out its great packaging, too. The cans are minimalist, which is eye-catching on the shelf, sure. More important, we get actionable information on the label: On the front, you get the intended style, which a lot of breweries neglect to include in their packaging these days, and ABV percentage, so you know what you’re getting into. Turn it around and there’s a description on the back, some suggested pairings and a scale for what the brewery considers the dominate trait in the beer (in this case, drinkability).

Score.
On a scale of 1 to 10, I give Manhattan Project Necessary Evil a very solid 9.