Before She Was St. Vincent, She Was Annie Clark. 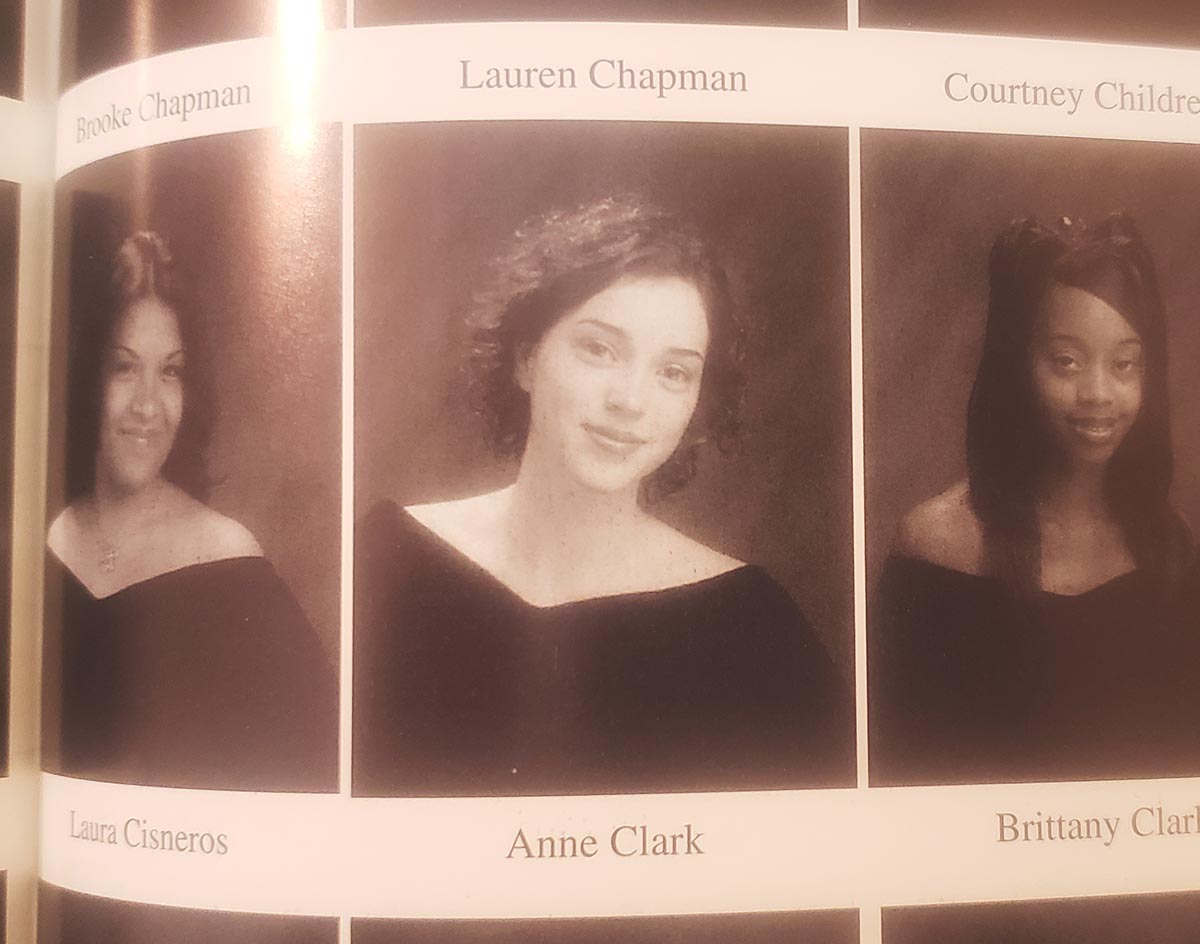 Looking Back At Her 2001 Lake Highlands High School Yearbook, It’s Pretty Clear That The Art-Rock Icon Known As St. Vincent Was Always Destined To Be A Star.

St. Vincent is a lot of things.

She’s an acclaimed musician, an iconic live performer, a Saturday Night Live regular, a daring filmmaker, a guitar designer, a music industry ambassador, a top-notch podcast guest and, yes, even a former member of the Polyphonic Spree.

But once upon a time, she was just Annie Clark — a Dallas-raised teenager who took guitar lessons at the Zoo Music on Garland Road, and drove around in her car with local bands she adored like Pantera, Toadies, Tripping Daisy and Spot blaring from her tape deck.

Thing is, even then, those who knew her best knew she was destined to go on to great things.

In the 2001 edition of the Wildcat — the annual yearbook released by her Lake Highlands High School alma mater — Clark is presented as one of her graduating class’ shining stars, repeatedly showing up in its pages as a darling worth celebrating.

Tipped off to its presence at the store by a reader who collects Dallas celebrity yearbooks, we recently stopped by the flagship Northwest Highway location of Half Price Books to purchase our own copy of the 2001 Wildcat. Immediately upon opening it, we spotted the star-in-the-making.

In advance of St. Vincent’s hometown performance at Irving’s Pavilion at Toyota Music Factory on Saturday, October 2, and in celebration of her 39th birthday on September 28 earlier this week, we present our largely unsurprising findings about a young Annie Clark below.

She might not have made it on the cover itself, but there’s plenty of Annie Clark to be found within these pages. 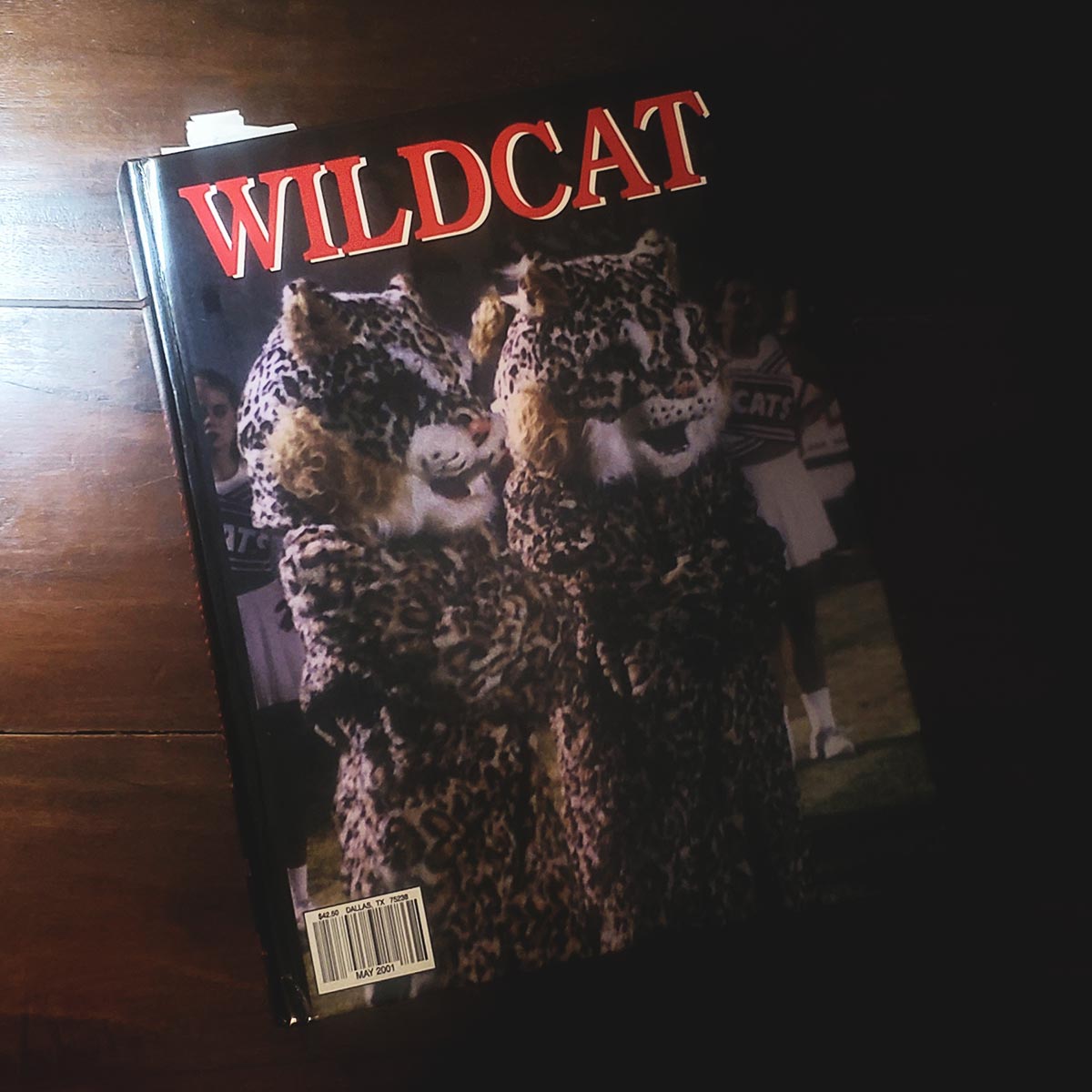 Clark’s first appearance in the Wildcat comes just nine pages in, during a photographic recap of the school’s annual talent show.

Here, she’s pictured as one of the performers at her school’s “Varsity Revue,” where she’s shown performing with a guitar and headset microphone in a photo captioned as, “Annie Clark serenades the audience with one of her songs.” (We like to think it was an early version of “Paris is Burning” off of her 2007 debut Marry Me LP.) 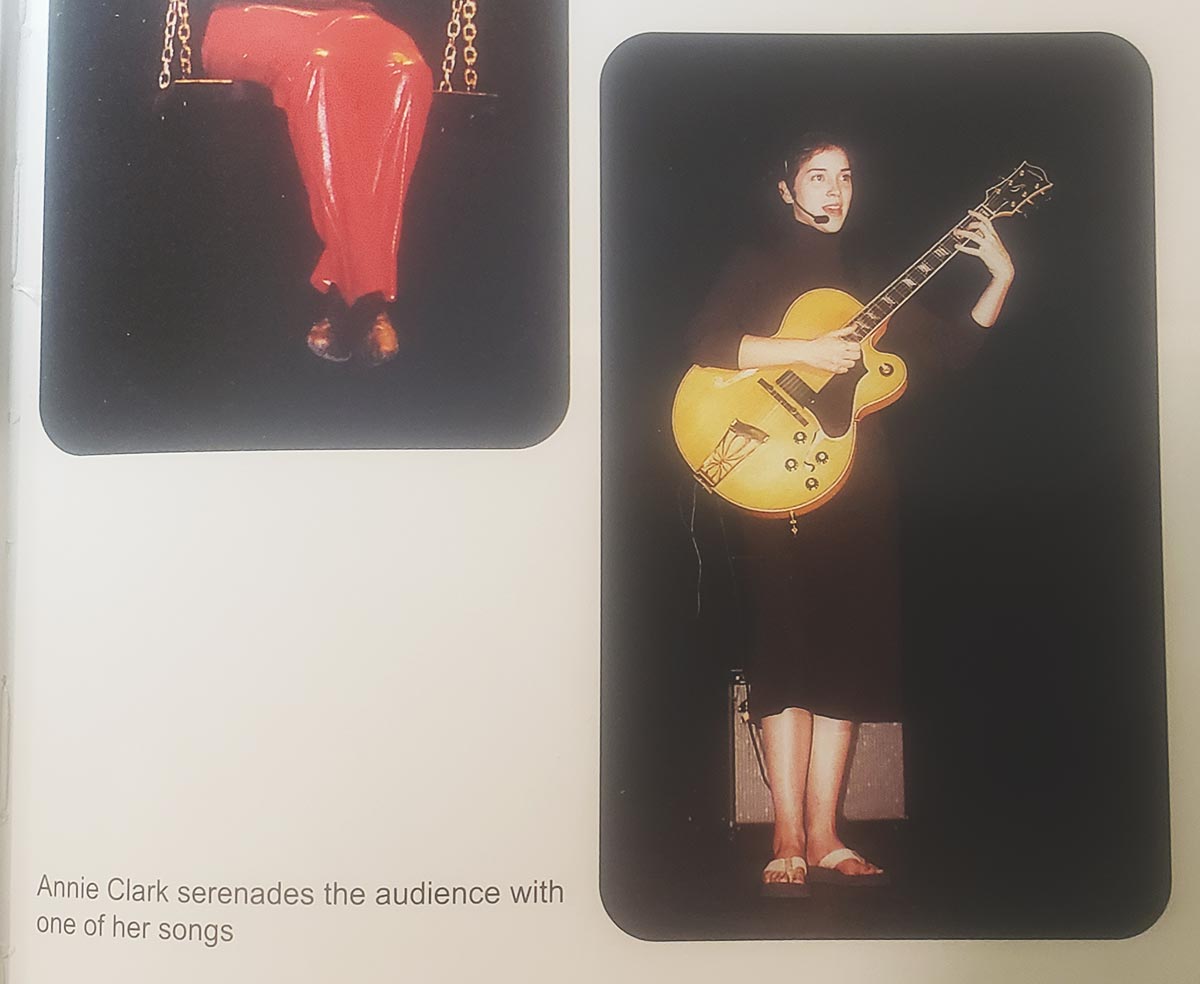 A few pages later, it’s clear that her classmates appreciated Clark’s budding abilities too, even going so far as picking her to be one of two graduating seniors named as “Most Talented.”

Gotta say: Clark’s classmates nailed this selection. Well done, gang! We do wonder what ever became of Brian Gundy, though. 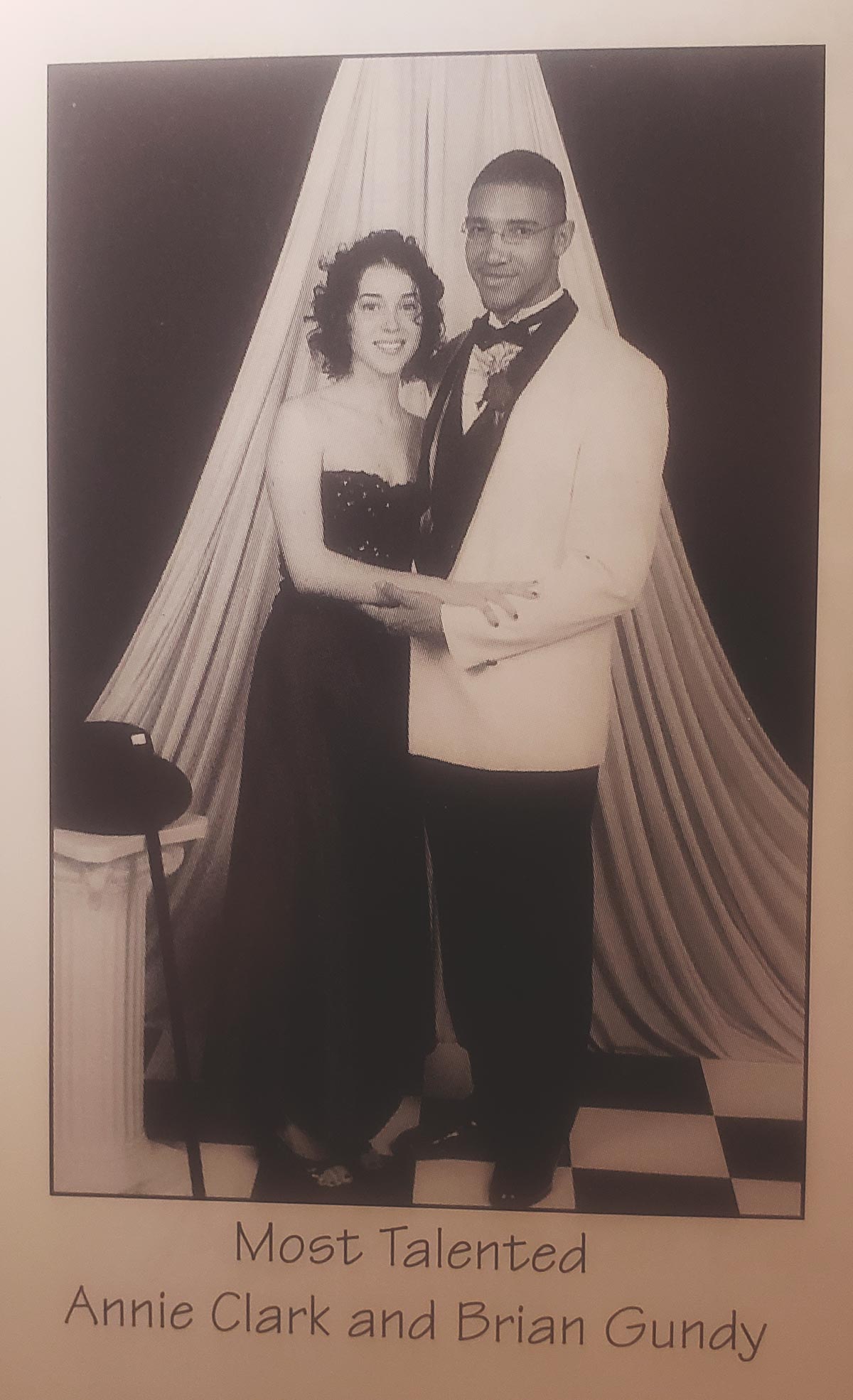 In the section honoring extracurricular activities and organizations, we meet Clark as a budding young thespian.

Here, on the Theatre page, Clark is quoted as saying, “I definitely plan on being very involved with theatre for the rest of my life.” Beyond her growing filmmaking resume, her reputation as an immensely theatrical concert musician — one with an impeccable eye for costume, set and lighting design beyond just dramatic theatrics in general — certainly bears this out. 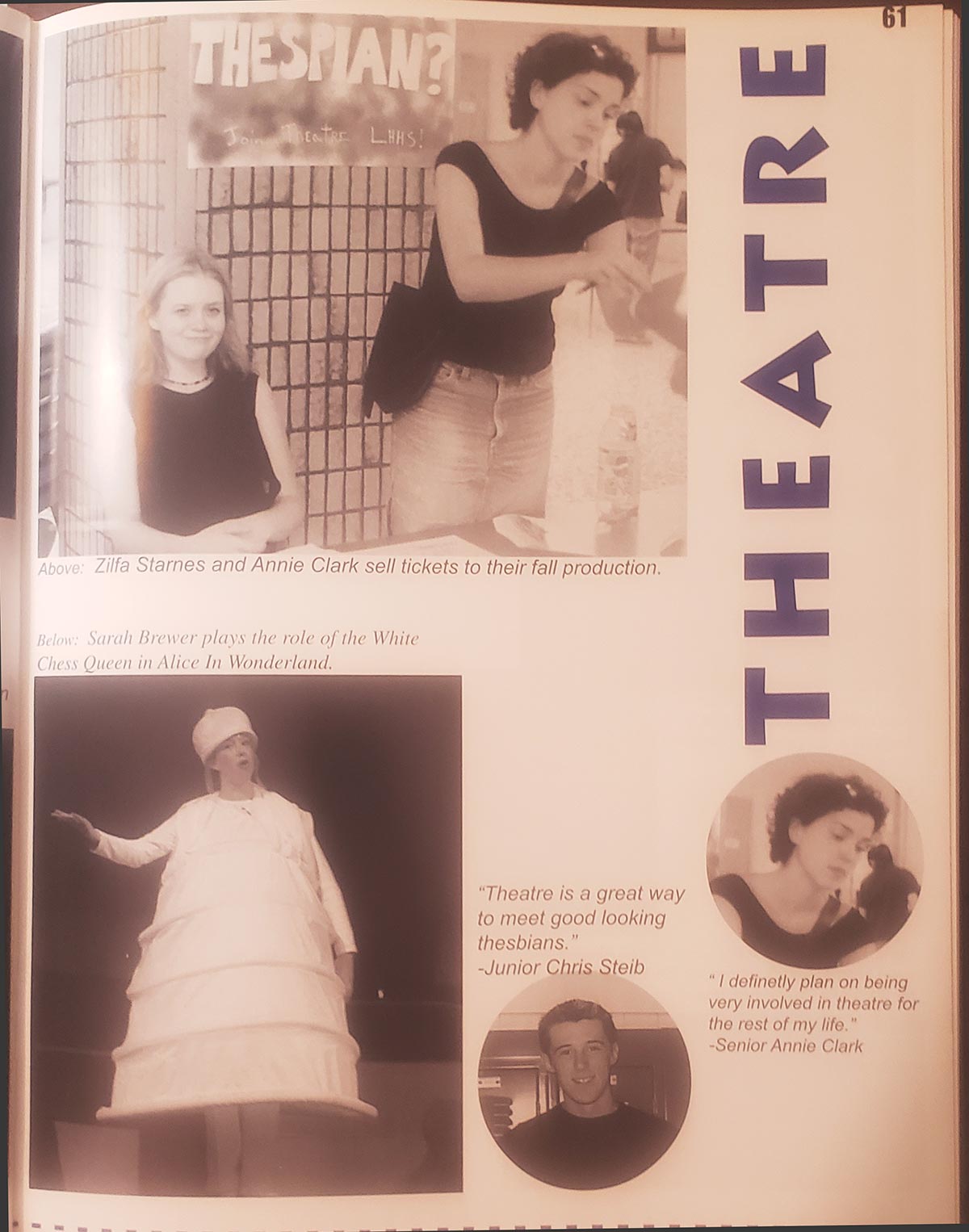 As you might expect, a young Clark was also a member of the school orchestra.

Here, Clark is seen on the two-page school orchestra spread, once again playing her guitar. We didn’t spot Clark in the marching band or jazz band pages, though. But that doesn’t necessarily mean she wasn’t a participant in those groups. We suppose it’s possible her exclusion was a conscious decision from Wildcat editors, who could’ve been justifiably sick of putting Annie’s face on so many pages in the yearbook at this point already. Still, even this guitar-playing posture is one fans will immediately recognize. 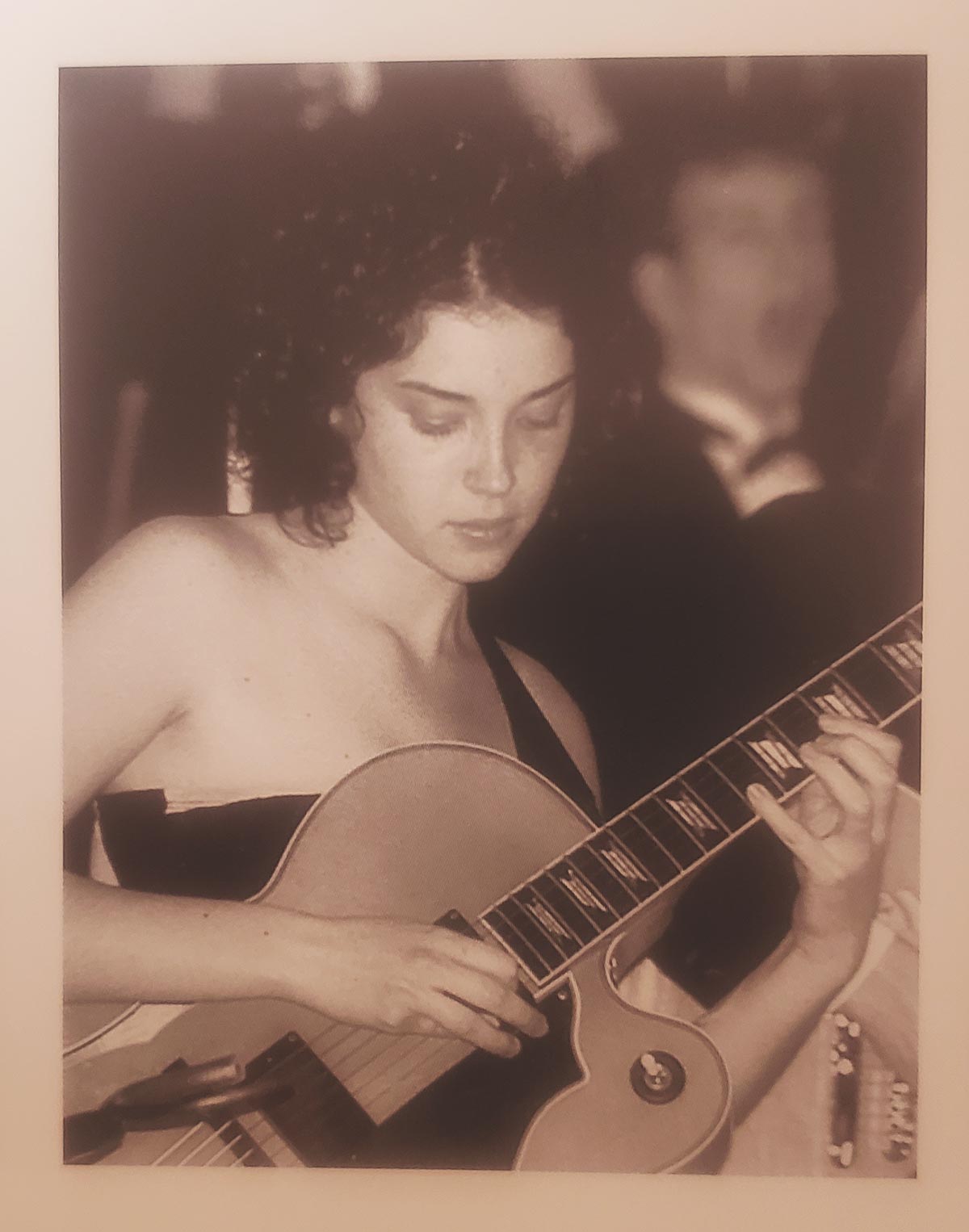 And, finally, here’s her senior portrait.

Most of us could only dream of looking so put-together and nice in our own senior pictures. And yet there’s something about Clark’s smile here that hints at some of her more devilish turns to come, no? Either way, here’s to you, “Anne”! If only young you could see you now…