This week, we sipped on Oak Highlands Brewing's Chump Change.

Overview.
Let's talk about Oak Highlands Brewing. A few months back, I reviewed their Derelict, and I was very impressed. No, really, that's exactly what I said back then, too. Opening this past July with five outstanding beers is a most impressive feat. So let's see if we remain just as impressed with its new winter seasonal.

Background on Saison.
For an overview on saison, visit our review of El Superbee de Saison. Chump Change is a bit of a different sort of beer, though, and for a couple of reasons. First, this is the darkest saison I have ever tried. So, unlike most saisons, this beer has a healthy addition of highly kilned malts that give it a nutty, roasty note. Second, this is an imperial saison. Just in case you're new to beer terms, the term imperial is a signifier for a beer that contains a higher level of alcohol than its every-day version.

Appearance.
This is a super black beer. And it's confusing. A friend of mine once told me that we taste beer with four of our five senses; it's a multi-sensory experience and we may never get away from that fact. Because this beer is so dark, there is a built-in expectation that the dark malts will dominate the palate. There's not much noticeable lacing in the glass, nor is there much of a head on this beer.

Aroma.
Like the dark malt that confuses the appearance, the aroma portion of the beer is also an enigma. First and foremost, I sense that classic sweetness and hint of citrus that saison styles are known for. And then almost tied with the Belgian character is a round chocolate, roasty, sort of bitter note. Some people might perceive the dark malt first. But I suspect that if I had you blindfolded and asked you to smell this beer and guess that color, you might not guess that this beer is darker than a black steer's tuchus on a moonless prairie night. The hop notes are non-existent in this beer. I have been so preoccupied with the roast and spice that I almost totally forgot to mention any kind of hop aroma. Ooops?

Flavor.
The flavor is crisp and clean. Dark malts do not overwhelm the palate as the color suggests. It's just not a big, badass dark malt driven beer. And it's weird! And y'know what? I like it! The Belgian saison flavor sticks around during and after each sip, and there's a clean aftertaste. There is a somewhat hot note on the tongue. But, hey, this is a 9.8 percent ABV beer — a helmet beer. And I don't mean fusel hot in a bad way; I don't perceive any nail polish remover or other off flavors that can be present when fermenting beer at too high of temperature. By the way, did you know that some saison yeast strains can ferment in the 90-degree range? That's way, way higher than normal ale yeasts, which ferment best just below 70 degrees.

Mouthfeel.
This beer is surprisingly crisp with full carbonation. There's no doubt about it, this is a full-bodied beer. But unlike a barley wine or some other classic big-sugar style, this beer is deceptively drinkable. I have to keep reminding myself that this beer is almost 10 percent ABV.

Overall Impression.
I like this beer. And I could drink several of these before I ditch my car and decide to Uber home. Typically, my craving for a saison fades as we move into 10 to 15 minutes of winter here in Dallas. But this beer bridges the gap between my love for warmer-weather saisons and increased hankering for cooler weather beers like porters and stouts. Why did Oak Highlands Brewing make this a 9.8 percent ABV beer? Dunno. I suspect that, since they want to have this beer as a winter seasonal, they wanted to make a bigger ABV beer, something that warms the palate. All in all, this beer is a confusing experience for the palate. Is this a bad thing? No, not if you want to drink an interesting beer that challenges your senses and asks you to try something new. In fact, I recommend it! 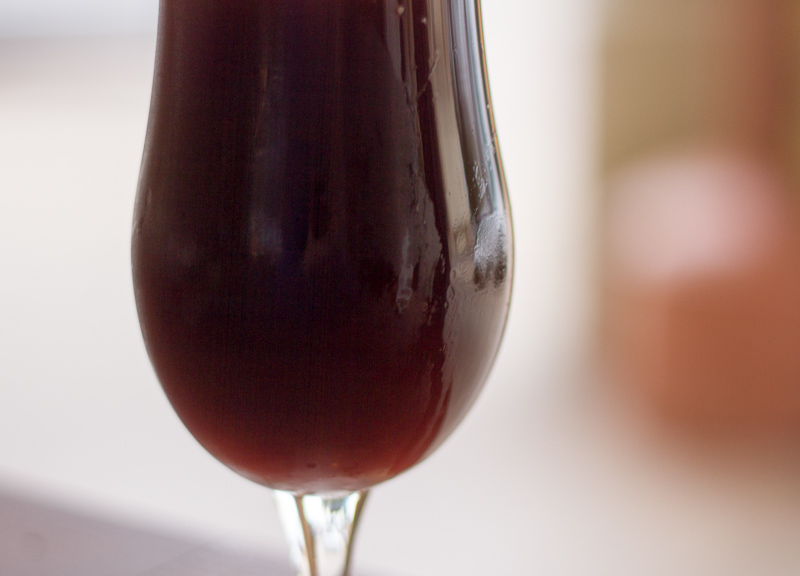