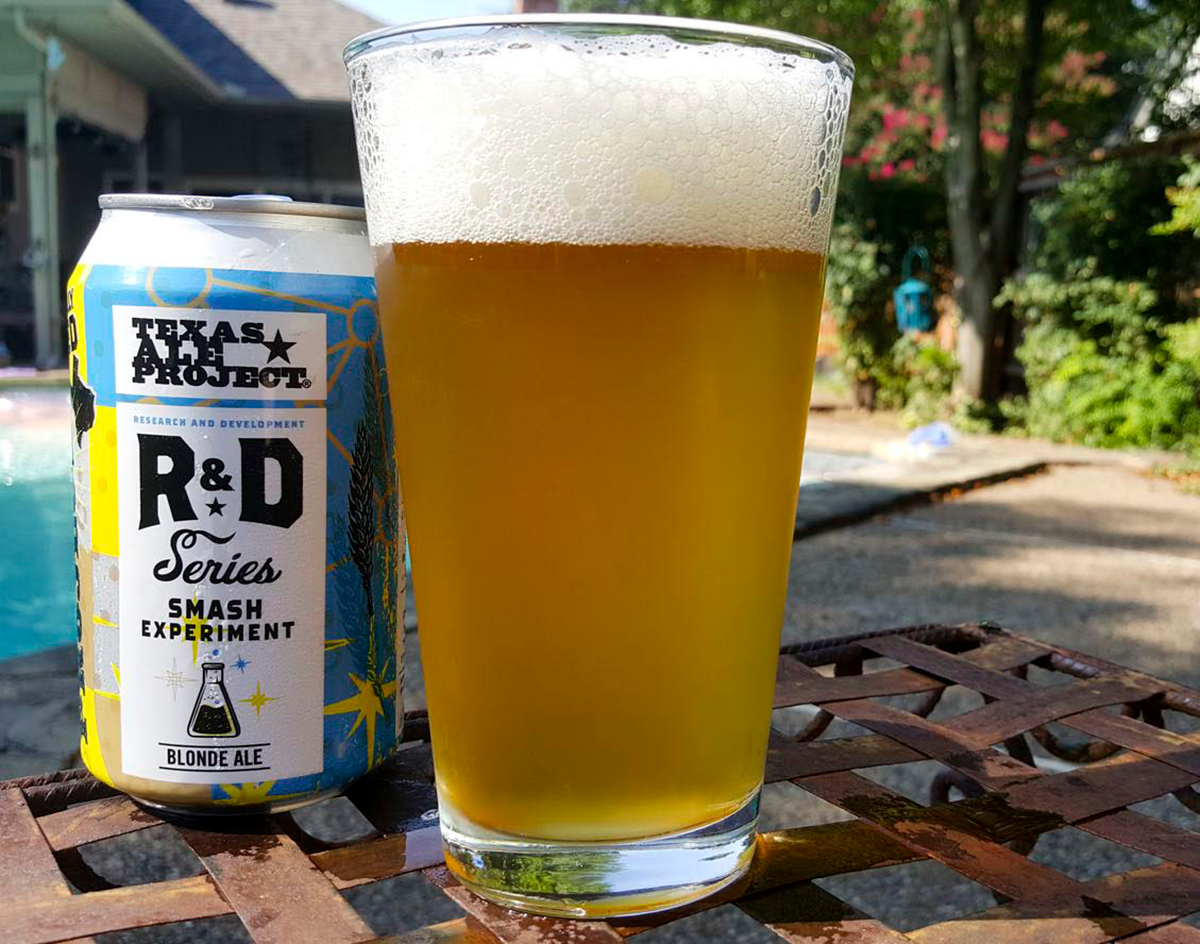 Texas Ale Project Gets A Little Experimental With The Latest Installment Of Its R&D Series, Making For A SMaSHingly Great Taste.

For this edition of On Tap, I had the latest edition of the R&D Series from Texas Ale Project called Smash Experiment.

Overview
Smash Experiment is the fourth beer in Texas Ale Project’s R&D Series — launched last summer — is designed as a vehicle for innovation for both the brewery and its customers, as drinkers of Texas Ale Project are encouraged to make suggestions on what should be brewed next. Each beer in the series will be brewed in limited quantities and available in package and on tap.

This edition is a blonde ale but also falls into an unofficial secondary style — SMaSH beer, hence the name. SMaSH is brewery shorthand for Single Malt and Single Hop, and it’s exactly what it sounds like – a beer brewed using a single malt varietal and a single hop varietal. In this beer, those would be Pilsner malt and Calypso hops. A SMaSH beer can be any beer style you like, although most of the ones I’ve seen done commercially are IPAs. Sounds easy, right? You’d think so, but it turns out not so much, at least in my experience. They are hard to balance and too often come up short in areas like mouthfeel and appearance because additions that usually fill in the holes aren’t used – additions like specialty malts or aroma hops.

Background on Blonde Ale
Blonde ales are a new-ish style, having just come around with the craft beer movement of the last 40 years or so. The style itself is designed as something of a light lager replacement for breweries that are not interested in investing the equipment to brew the colder fermenting lagers. Blondes are typically all-malt ales, meaning no adjuncts like corn or rice, with a malt-forward flavor, clean for ale, but with a touch of fruit and (or) spice, differentiating it from a lager. It’s usually a light, easy-drinking beer of session strength or a little higher with just enough bitterness to balance and a malt finish. For this reason, blonde ales are often considered something of a gateway beer to get a habitual macro drinker to dip their toes into the broader world of craft beer.

Appearance
I give blonde ales a vigorous pour out of habit in an effort to overcome regular issues generating a respectable head, but here, I get my first surprise as Smash Experiment produces foam in a quick and easy manner, giving the beer a beautiful inch-deep, off-white cap of tight bubbles. The beer itself is a brushed-gold in color with a thin fog floating through it – not so much that you can’t see through it, but enough to let you know this beer won’t be thin. The head lasts longer than typical for the style too, taking several minutes to reduce down to delicate islands of fine foam floating on a molten sea of gold. 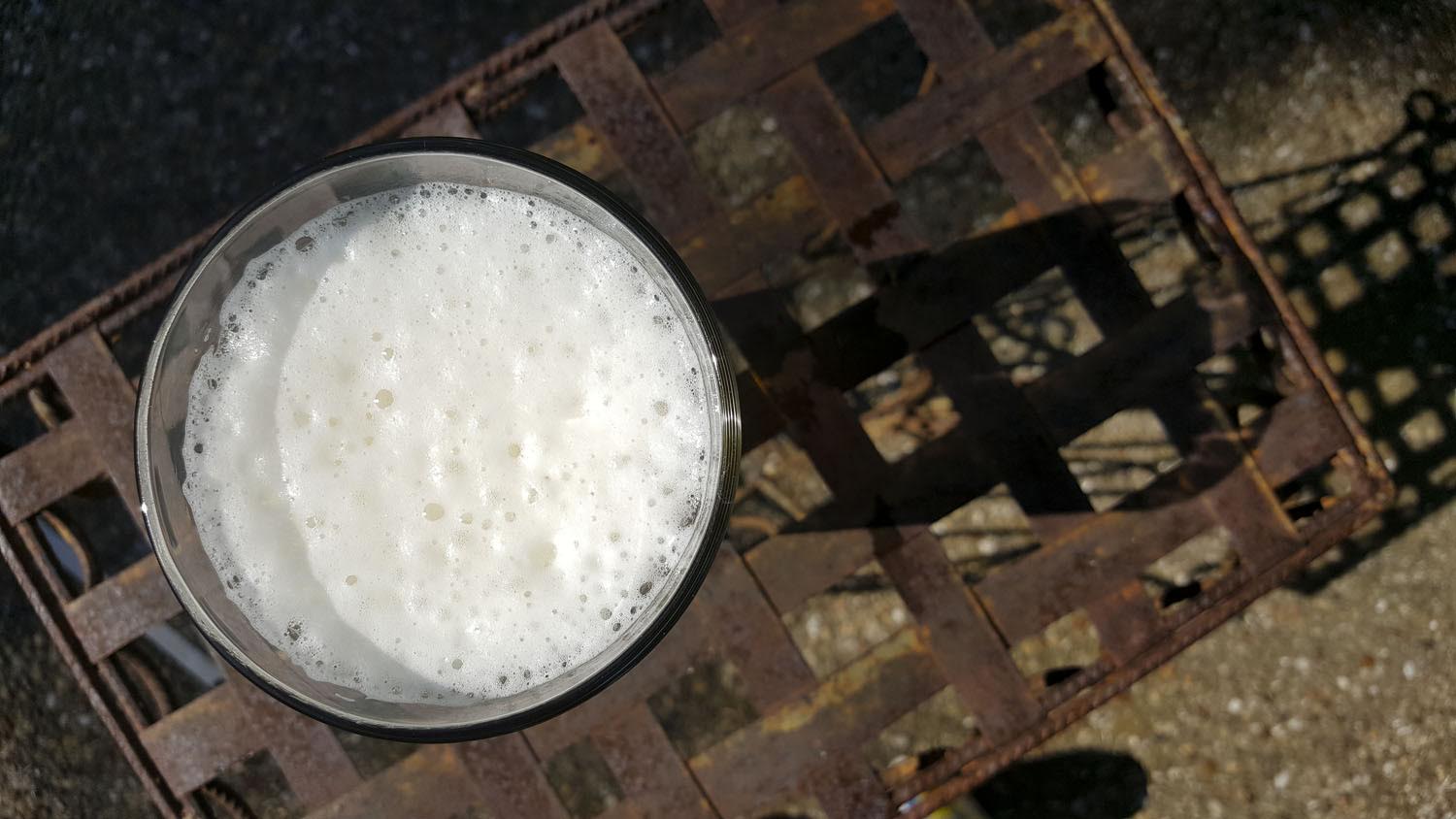 Aroma
If I didn’t know which hop varietal had been used prior to having this beer the first time, I might have thought it to be an English brew. There is a hint of underlying citrus but it’s secondary to pomme fruit, earth and some grass. The aroma is subtle though, at least for normal blonde ale serving and drinking temperatures (low 40s F). The Pilsner malt makes an appearance, too, with some lovely fresh bread notes. But again, not obvious until it warms up a little.

Flavor
This is where the Pilsner malt really shines through – a doughy bread leads, with support from enough bitterness to be comfortable in the role without trying to upstage the star. The malt is back for the finish, sweet enough to leave my mouth wet. Swirl it around your mouth before you swallow and you will get some fresh fruit – specifically pear and peach. There is light citrus here too, a Sprite-like lemon-lime, but it’s faint.

Mouthfeel
The mouthfeel is big for a blonde, which is yet another pleasant surprise. It’s a solid medium body that hides the carbonation well enough to make me question what my eyes saw in the pour. With the amount of foam, I expected a bigger bite from the carbonation, but this is smooth with just a bit of edge against the roof of my mouth. The next word that comes to mind is full. Not like an IPA or something dark, but if you are expecting something closer to a macro brew, this is full. A clean, quick finish lingers just long enough to make you think about that next sip. 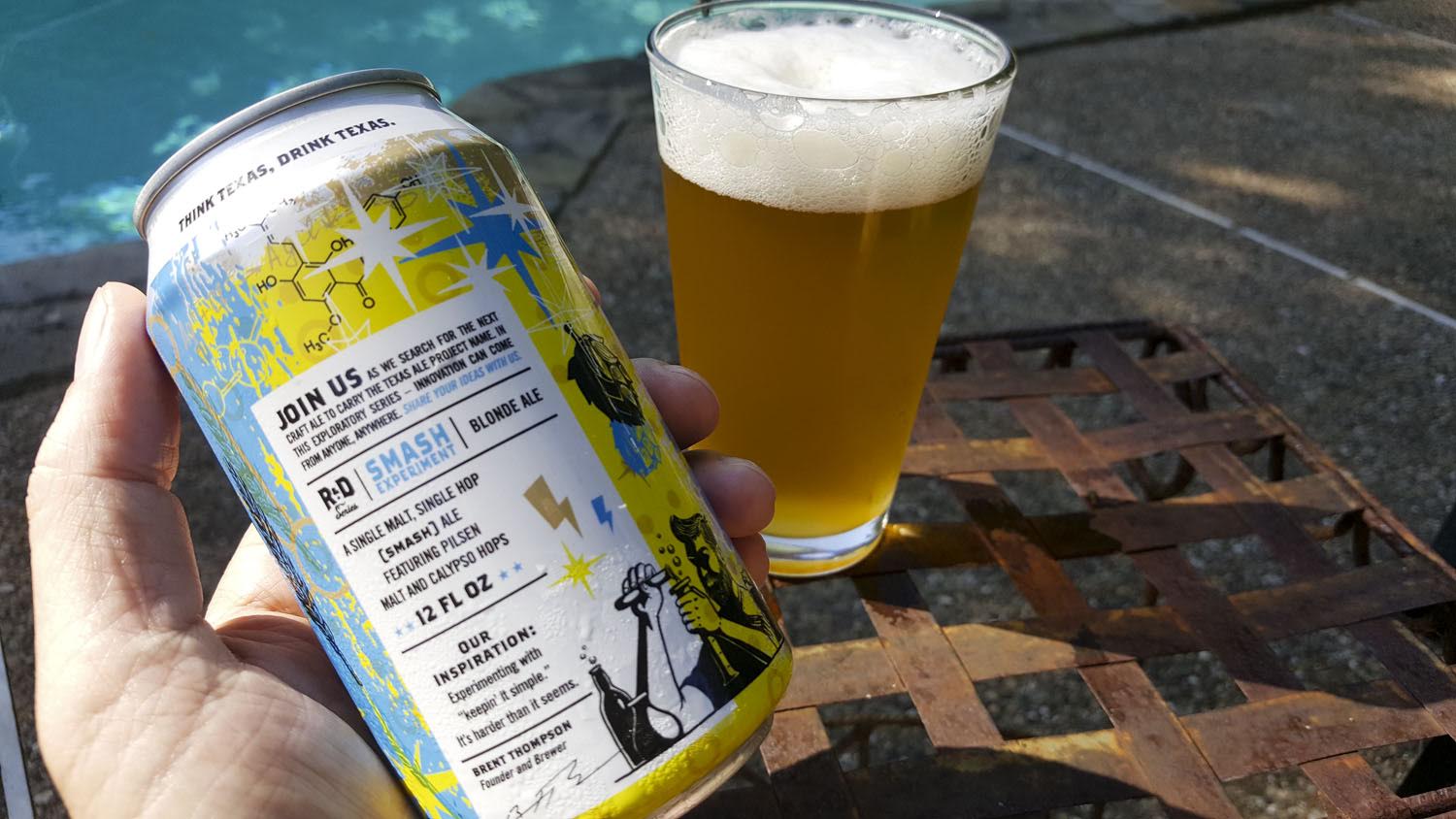 Pairing
First thought — shrimp boil. Break out the potatoes, corn, sausage, shrimp and Old Bay, ice down a couple cases of this and invite everyone you know over to a food and beer coma party. Smash Experiment has enough oomph to go with the spice I like in a boil — which is not something I usually say about blonde ales — without trampling the food. The malt flavors work well with herb-crusted goat cheese, giving you a taste of what the cheese might be like on a slice of fresh bread. It’s light enough to go well with a chef’s salad, too. Finally, it has me thinking about trying a “beer can chicken,” where the beer is both an ingredient and a partner at the table.

Overall Impression
As beer styles go, blonde ale is near the bottom of the list for me, which is a problem, because nearly every brewery in Texas has one in their core lineup. However, I view it for what it is designed to be — a light lager replacement and a gateway beer. Having said that, this is a blonde ale that will satisfy the craft beer veteran without scaring off the Bud Light regular. If I owned a bar, I’d put this on tap and offer a sample to everyone who ordered an American macro.

It isn’t quite perfect though. If I’m going to have a blonde, I want it to be a bit more of a session beer, rather than this at a full 6 percent. And while I loved the rich head when I poured the beer, that same head didn’t leave much in the way of lacing in my glass. Granted, that is purely aesthetics, but I still want to see it. Don’t get me wrong, neither of these things are deal-breakers for me. In fact, I really liked this beer. So much so, that I’m hoping it becomes part of the core lineup at Texas Ale Project, something folks at the brewery told me might actually happen if it’s popular enough. So, if you like this beer and you’d like to see it stick around, drop them a line and let them know how you feel. I certainly did.

Score
On a scale of 1 to 10, I give Texas Ale Project’s Smash Experiment an 8.