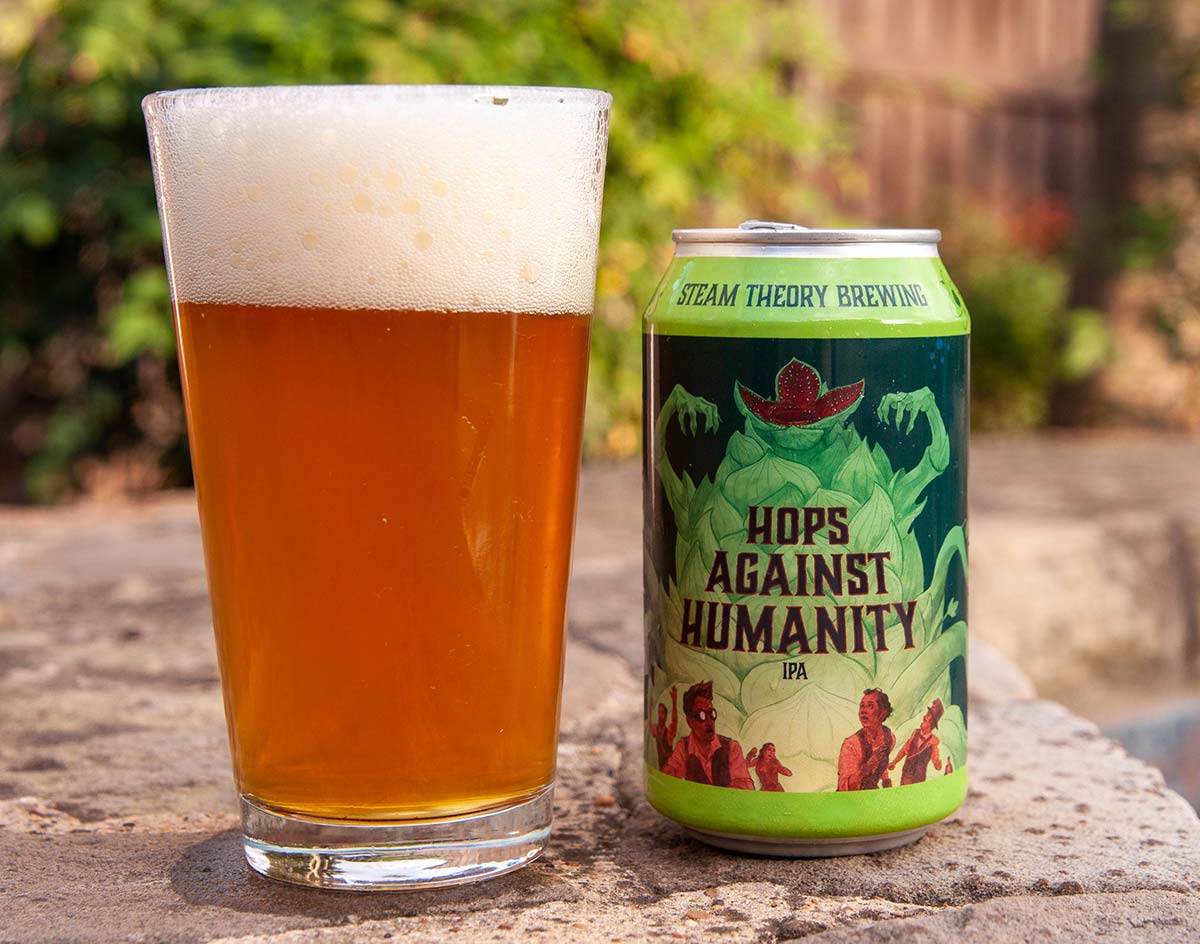 There’s Nothing Subtle At All About This Cheeky American IPA Produced By The West Dallas Brewery — And That’s A Good Thing.

This week, I sipped on Hops Against Humanity from Steam Theory Brewing Company.

Fast Facts about Hops Against Humanity 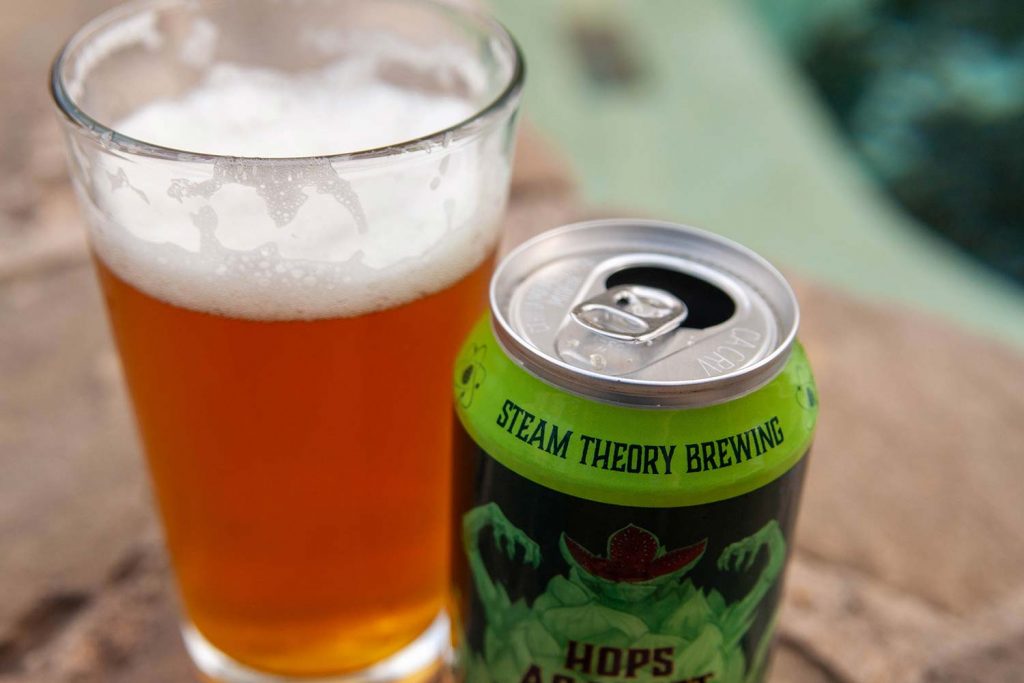 We can’t really refer to Steam Theory as new to the Dallas beer scene — it made its debut all the way back in 2018 — but the brewery isn’t exactly a household name quite yet either. Historically, theirs has been a mostly boutique operation. Sure, you can find their beer on draught in just over a dozen bars around Dallas, but most of their product is sold out of their Trinity Groves brewpub location.

So I was pleasantly surprised when I stumbled over Hops Against Humanity on the shelf at my local Central Market. It was the first time I’d seen their beer in cans anywhere. As it turns out, this offering — which, yes, is very much indeed named in honor of the “controversial” card game — is one of two brews that the board game-obsessed Steam Theory currently packages for sale in stores. (The other is its Singularity Blonde Ale.)

That it also operates as a brewpub has certainly been an advantage of sorts for the brewery throughout the pandemic; unlike many of their taproom-focused peers, Steam Theory could keep its doors open due the fact that they also served food. On the other hand, it still had to be tough for a business barely 18 months old when the world shut down a year ago.

That Steam Theory is still around as the pandemic-related restrictions loosen is a good sign that the brewery boasts a quality product and a loyal following. 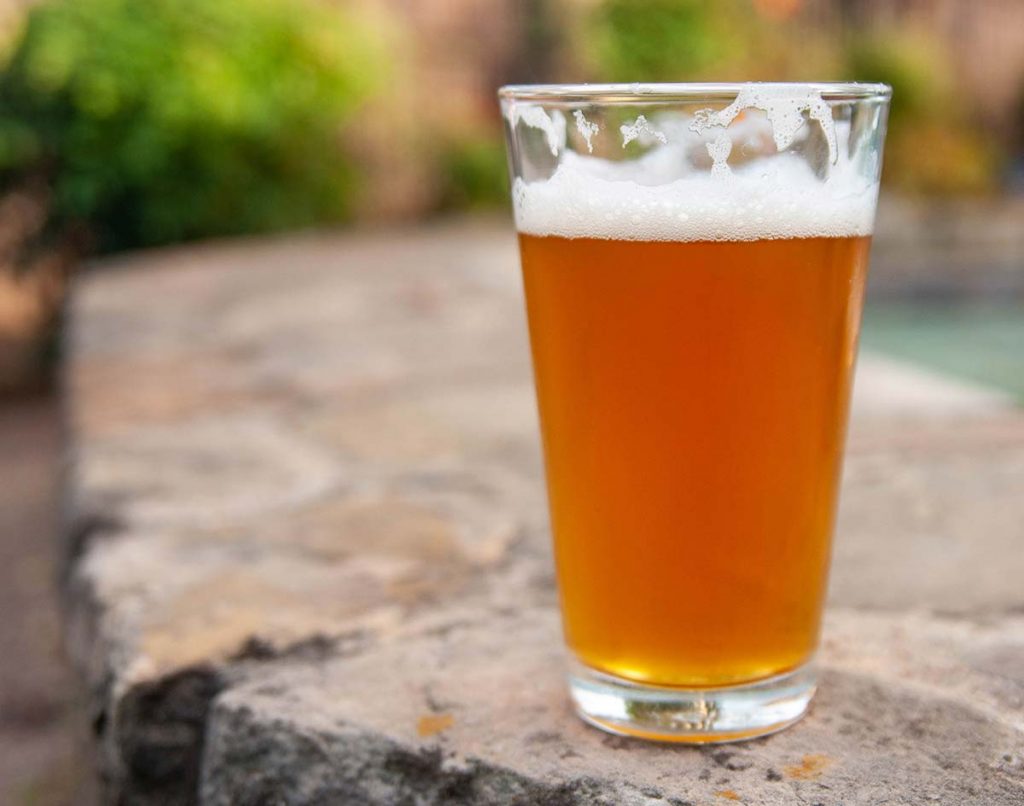 American IPA is our country’s spin on an English classic. In the U.S., we tend to live by the idea that bigger is better, and our beer styles are no exception. The American IPA is the style that started the Hop Wars — a race for bigger, bolder bitterness in what seemed a bizarre attempt to separate the beer men from the beer boys. Subtle, it isn’t. Breweries in this country swapped English ingredients for American ones while dialing back the flavors created from the malt and yeast in order to punch the drinker right in the mouth with its hops. To that end, aroma is key to this style, which tickles the nose with notes of citrus, pine, resin, various fruits and floral fragrances.

Hops Against Humanity offers up a textbook pour for an American IPA. This beer pours a rich, burnished gold-amber color that starts out a touch cloudy but clears quickly. The foam bubbles up the second you pop the tab on the can, warning the drinker that a careless pour will likely result in an overflow. Properly poured, though, this beer is beautiful, and the head sits proudly atop of it, demanding your appreciation. The mostly fine bubbles have better than average persistence too before ultimately collapsing in an irregular slump down to the beer hiding underneath. 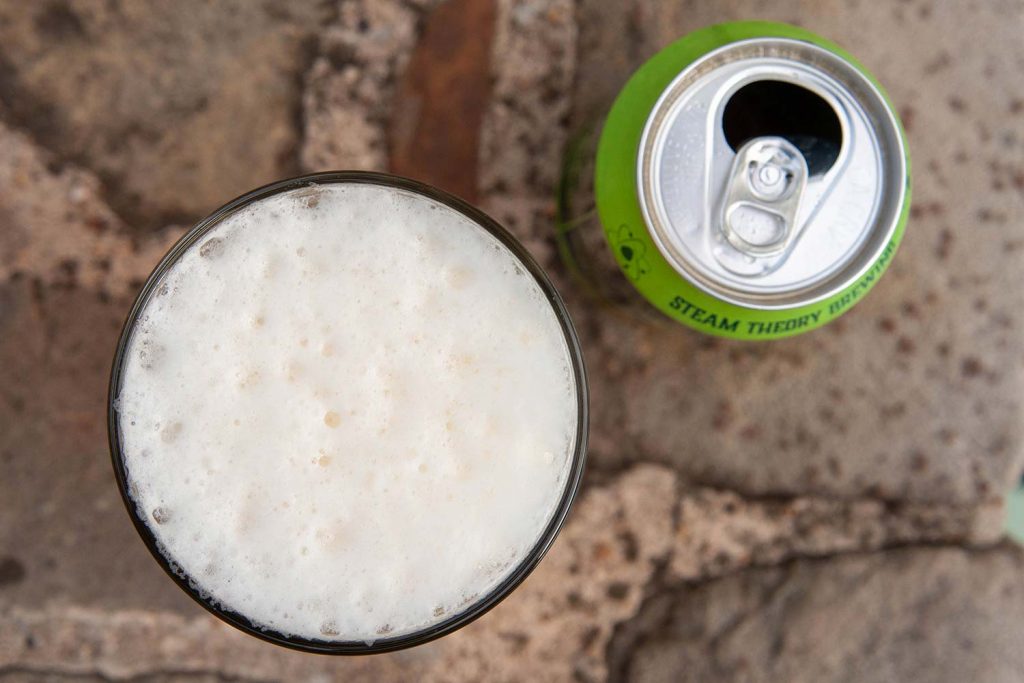 The smell here is everything the experienced beer drinker has come to expect from a traditional American IPA in general — and a West Coast IPA, in particular. While the pine and resin notes are the driving force here, one doesn’t have to look very far for the familiar citrusy grapefruit scents playing a firm supporting role in the action. One sniff is all it takes to confirm that, yes, this beer is exactly what it says on the can.

As with elsewhere, this beer is all about the hops in the flavor department too. The same dominant pine and resin tastes that were so obvious in the aroma make their presence known here, too. There is also a bare minimum of bready malt under all the hops — but you nearly have to be looking for it in order to find it. 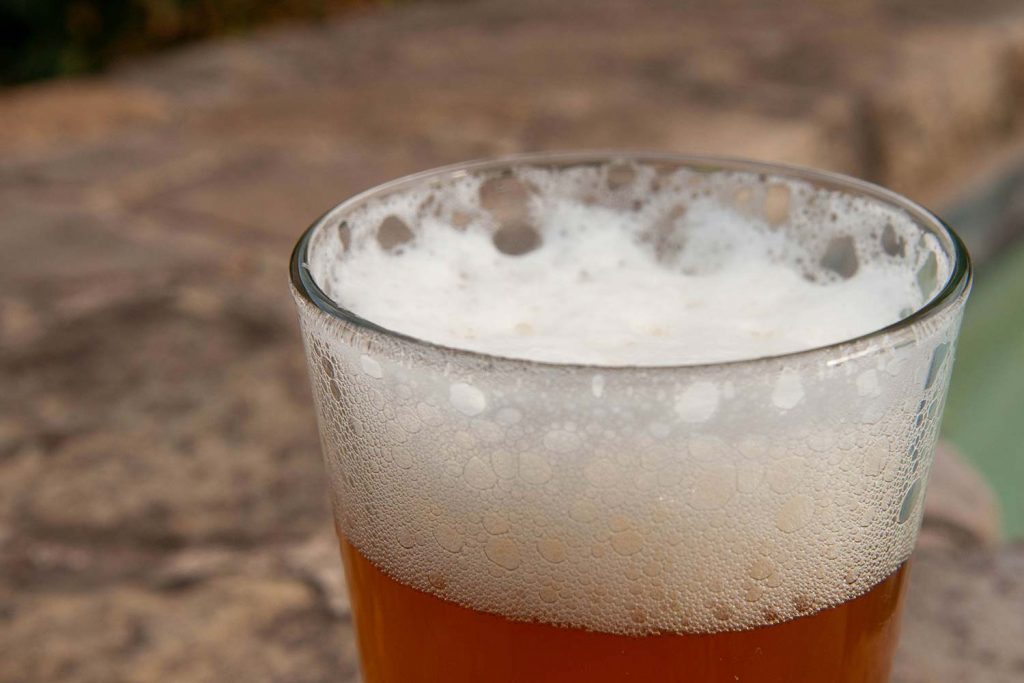 Hops Against Humanity has a medium-full body, making it a touch weighty for the style. But it still feels good in the mouth. The alcohol isn’t particularly noticeable, but the medium-high carbonation provides a mild burn up and down the sides of the tongue. The finish is medium-long and medium-dry, with almost nothing in the way of malt sweetness.

Any good American IPA goes directly with standard pub grub, and this beer is certainly no exception to that. It would work well with so much more, too, although matching the intensity is key. I paired it up with a turkey and sausage gumbo, and that was amazing. The pine and resin complemented richness of the roux, while the hops dialed up the heat from the ground andouille sausage. The bitterness and carbonation also served to cleanse the palate between bites. I also imagine it would pair well with an aged British cheddar, or even a young goat cheese. 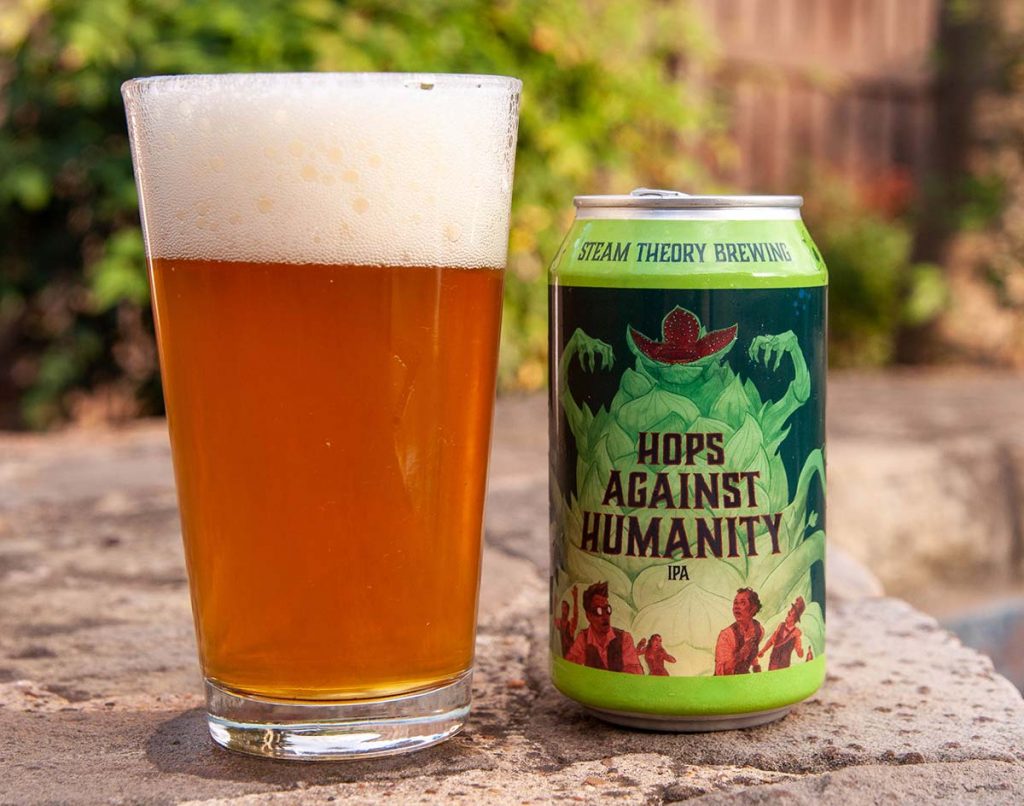 I don’t just like Hops Against Humanity; I love it.

This is a proper IPA that demands to be recognized as such. It unapologetically revels in the pine- and resin-driven edgy bitterness, which is something I dearly miss in this age of soft, hazy IPAs that have been designed to appeal to the non-beer drinker.

If you’ve read many of my reviews in the past, you know that, in the interest of being fair, I try to mention the things that I find out of line with the style. In this case, though, there just isn’t much of anything to harp on. This is just a really well-executed beer that is enjoyable to drink.

I want more breweries to produce beer like this. In the meantime, I’ll be heading back over to Central Market to pick up all the Hops Against Humanity they have left on the shelf.

On a scale of 1 to 10, I give Steam Theory’s Hops Against Humanity a strong 8. 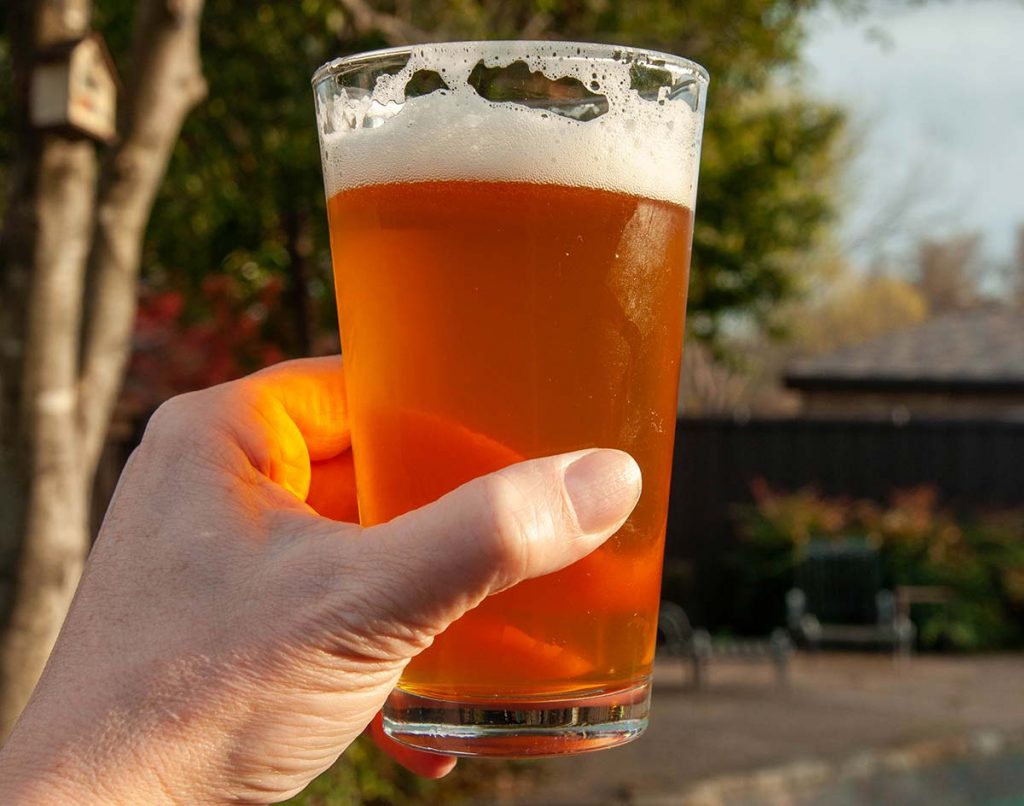