Why The State Fair Sucks: Big Tex Was An Inside Job. 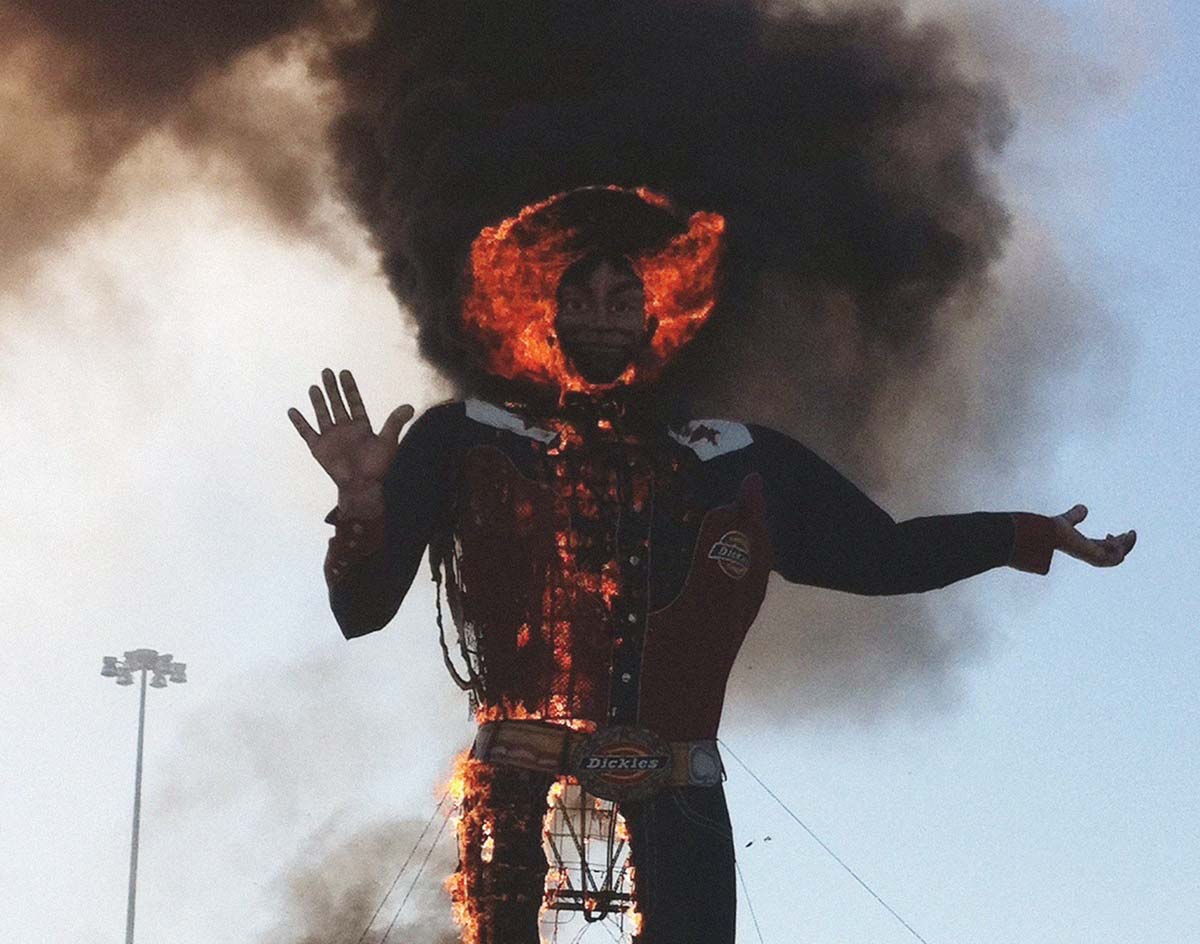 We’ve Been Over This Before, But It Bears Repeating: There Are Just Too Many Coincidences Surrounding The 2012 Big Tex Fire To Believe It Was An Accident.

We’ve been over this before. Quite a few times, actually.

But we’ll say it once more for the people in the back: The more you look into it, the more it sure seems as if the October 19, 2012, fire that burned Big Tex was an inside job — a likely falsehood perpetrated by fair leaders to facilitate getting an upgrade to their event’s visual centerpiece while at the same time avoiding public outrage from purists who’d bemoan their decision to mess with tradition.

Here’s what we wrote about the blaze within a 2017 entry into this series about the way in which the fair is quick to cast its icons aside:

Just as selfie culture began to rise as means to further spread Tex’s gospel and image across social media, an electrical fire sparked in Big Tex’s size-70 right boot and spread until the entire statue went up in flames… Big Tex — or this version of it, anyway — did not survive the fire… [and] the circumstances surrounding that whole incident are dubious at best.

For starters, the fire was presented to the public as nothing more than an accident, but go back and listen to the Dallas Fire Department’s dispatches about the blaze. Not only are the first responders shockingly calm about a 52-foot-structure being set on fire, but they gleefully hopped on their scanners to crack jokes about it.

Consider also that the fire happened early in the day, before too many people could’ve been on the grounds and potentially harmed by any rogue flames, and that it happened in the final weekend of the fair’s 2012 run after the majority of the public had the chance to see its adored fair feature.

Also worth noting? The fact that Mayor Mike Rawlings’ schedule was free enough on the morning of the blaze for him to drop whatever he was doing and make his way to Fair Park to pay his respects before the statue was torn down, ready to speak to the press and echo the sentiments of the fair’s own spokespeople, claiming before the statue was even fully gone that Big Tex would be back “bigger and better for the 21st Century” the following year.

Never mind that these people were right in their prediction that Tex would return in 2013 three feet taller than he was before, and boasting a whole slew of new features; it’s pretty convenient that a concerted formal press strategy was already in place that morning about Tex’s future — almost as if, y’know, the fire was planned and set in motion as a means to update an adored structure without upsetting the traditionalist State Fair of Texas obsessives who would’ve cried bloody murder about such a change had they been given the chance to have any input in such a decision. Speaking of curious decisions: After accepting more than $45,000 in private donations from the public to rebuild the statue, the fair just happened to have enough extra funds at the ready to drop a cool $500,000 in total on the Big Tex it would debut at the 2013 fair.

In a 2012 story we posted just five days after the blaze occurred, we raised some additional — and quite damning, we think — issues surrounding the circumstance:

Prior to opening day this year, the following paragraph was posted verbatim under the “attractions” section of the Fair’s official website: “When BIG TEX turned 50 in 2002, he was feted with a giant birthday cake and an AARP card, even though he did not in fact retire, proclaiming himself much too young for such as that. As the 60th milestone approaches, Fair officials are planning a surprise party for Big Tex and at this point, believe he doesn’t suspect a thing.”

Kinda creepy in retrospect, right? We acknowledge, of course, that an actual birthday party for Tex was, in fact, planned. But we’d also like to point out that there is just something peculiar about the way the information was worded. Plus, this part, originally set to take place on September 29, was conveniently cancelled due to rain. Is it possible that the fire may have been the very “surprise” that Big Tex allegedly never suspected?

The Fair’s theme this year, it must be noted, was “Big and Bright.” What’s bigger and brighter than a 52-foot-tall cowboy on fire?

A just-as-likely Big Tex sacrifice theory centers around the fact that the fire was started to raise the funds necessary to cover growing costs required to hold the 24-day event. Consider the following: After Big Tex’s lifeless frame was finally lowered, the State Fair’s official website saw an increased demand on Big Tex bobble head dolls — so much so, in fact, that the entire batch original run of the dolls was sold out, causing organizers to re-order another batch. Since when has the Fair been in the practice of re-stocking their merch a week after its closure that same year?

Then there’s this: With a rainstorm washing out opening weekend, this year’s Fair originally started off incredibly slowly as fair economics go. Could Tex’s demise have been planned to help increase final weekend numbers? It’s plausible, especially when you consider this remarkable Dallas Morning News report that says the State Fair of Texas might’ve even broken a spending record by the time things were all said and done.

It’s also possible the statue’s destruction could be just a clever ploy to boost attendance at next year’s fair (i.e. everybody will want to go check out the new, “bigger” Big Tex) while simultaneously garnering the Fair national attention for the effort. That much, at least, makes sense. How many other years can you recall seeing the State Fair of Texas earning coverage from the likes of such national outlets as TMZ as was the case this past weekend?

It’s all pretty curious, no?

Remember too that the fair used Big Tex’s rebuild to ouster its longtime voice of Big Tex and replace him with a new voice whose identity it now keeps a secret.

After all we’ve covered in this series and offered up as proof of the fair’s (at best) shady practices, you surely don’t still think this kind of activity is beneath the fair, do you?

If so, well, sorry. You clearly haven’t been paying attention.