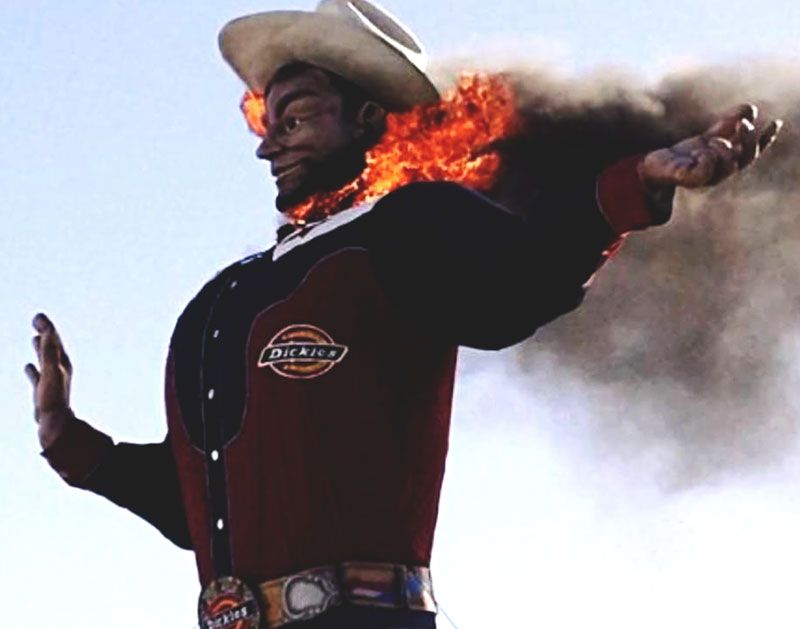 By now, we’ve all heard the news: The 52-foot-tall Big Tex statue in Fair Park caught fire on Friday morning, effectively ending his 60-year run as the State Fair of Texas’ mascot and icon.

A weekend of grieving later (check out the Big Texas Grief Support page on Facebook), a few other facts are known about the incident: 1) The fire was caused by an electrical shortage in Tex’s right boot, and 2) Dallas mayor Mike Rawlings wasted no time in acknowledging that Big Tex would be back “bigger and better for the 21st century” in 2013.

But some questions remain.

Have you heard, for instance, the Dallas Fire-Rescue dispatch about the blaze?

Those firemen crack pretty wise about the incident in that audio.

Maybe too wise, if you think about it.

Actually, a lot of things about Big Texas’ demise come into question if you think about it long enough. For instance: Isn’t it crazy how Mayor Rawlings already had an action plan in place for a Big Tex replacement should something like this go down? And isn’t it kind of amazing that the State Fair had a massive sheet available and ready to use as a body bag in a moment’s notice?

What if — and, yes, we know we’re reaching here — Big Tex’s fiery death wasn’t the accident it has been reported as being?

It’s a question Oak Cliff mainstays DJ Stibs and rapper Lionheart went over in depth in a new episode of Lionheart’s Federal Podcast this weekend.

And, really, the more you hear them talk about the coincidences surrounding Big Tex’s last day, the more you think their theories actually hold some water. Check out the podcast (complete with its shoutout to yours truly and all) for yourself at the end of this story.

Then honestly ask yourself: What if this is bigger than the State Fair? How high does this conspiracy go? These are questions one almost has to wonder at this point.

Update: As noted in the comments but not properly specified in the story above, the podcast’s theory is that the powers that be wanted to replace and upgrade Big Tex anyway, but that any announcement of such would’ve caused an uproar from traditionalist set. Now, with him burning down, they have the full support of Tex’s fans to rebuild him differently. Kind of an interesting theory, no?