Why the State Fair Sucks: Did We Mention Its Racist Past? 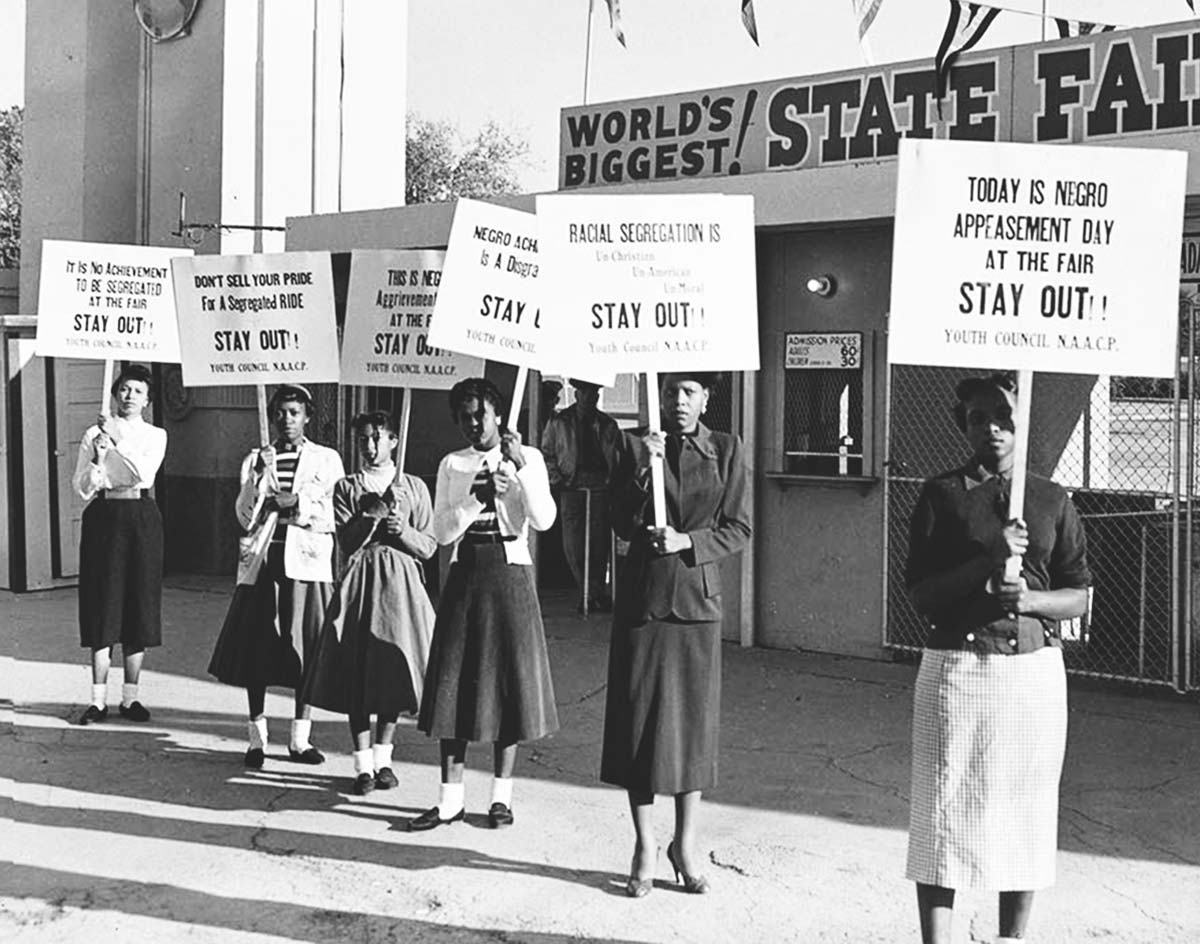 Here Are Some More Examples Of The State Fair Of Texas’ Sordid History — And, Yes, A Suggestion On How It Can Work To Right Some Of Those Wrongs, Too.

Already in this series’ run, we’ve highlighted the State Fair of Texas’ disgusting early affiliations with the Ku Klux Klan, the shockingly racist events it used to proudly host back in the day and even the systemic bigotry that still shapes the fair in many ways today.

Lest that’s not proof enough of the fair’s problematic past and present, allow us to share with you yet another example of how indifference towards marginalized communities is wholly ingrained in the state fair’s DNA.

As you might expect, much like most every non-minority-owned business in Texas’ first century, the State Fair didn’t allow black people to attend its offerings through its first few years. It didn’t take the fair too long to address that issue, though: In 1889, in its infinite mercy, the fair created a “Colored People’s Day,” in which it dedicated a single day of during its run to deeming black people worthy enough to enter its grounds. They still weren’t worthy enough to ride any rides or eat at the concession stands, though — don’t be silly! Of course they were still barred from all that. But, like, they got to walk around and stuff, so… score?

In 1936, the State Fair again decided to again address its “problem,” this time by re-branding “Colored People’s Day” as “Negro Achievement Day.” The change in name coincided with other updates the fair had slowly added to this day’s offerings, which by this point included parades and an awards presentation in which the fair distinguished one lucky black Texan as the state’s “Most Distinguished Negro Citizen.”

In 1951, NBC 5 reported on the event, referring to “Negro Achievement Day” as “the largest gathering of negroes in the Southwest.” Perhaps spurred on by those figures, the fair decided in 1953 to allow blacks through its gates on all of its days as opposed to the one. But, much as the fair believed this move to be a progressive one that fully “integrated” its offerings, this was hardly the case: Black fairgoers were still barred from the fair’s rides and restaurants, except on (you guessed it!) “Negro Achievement Day.”

Fed up with the fair’s backhanded treatment of black Texans, an NAACP Youth Council adviser for Dallas named  Juanita Craft planned a protest against the event in 1955 in which she encouraged young black Dallasites to boycott “Negro Appreciation Day,” which this group had taken to calling “Negro Appeasement Day.”  On October 17, 1955, she and fellow activists blocked the entrance to the fair and picketed the fairgrounds for 16 hours. Years later, Craft — also the first black woman to vote in Dallas County — described how she and her fellow young protesters stood atop the parade floats and chanted “Don’t sell your pride for a segregated ride” at any and all passersby on that day. In response to this searing criticism, Dallas mayor Robert L. Thornton — a known prominent figure in area Ku Klux Klan chapters — openly denied that the Fair was segregated at all, while also saying that “due to… legal commitments, the eating concessions would remain as they are [i.e. segregated].”

The NAACP gave Craft and the Dallas Youth Council formal commendation their efforts, but the movement’s message still fell on deaf ears within Dallas and State Fair of Texas leadership. The fair would remain segregated for years to come.

In 1957, fair organizers finally made one concession to the activists, stripping the word “Negro” from the event’s annual Achievement Day, which itself would be dropped altogether in 1961. Still, the fair would not be “unconditionally” desegregated until 1967 — a full three years after the Civil Rights Act outlawed segregation in public settings across the country in 1964.

To this day, the fair maintains a sluggish approach towards improvement — this, after all, is the same event that recently took 15 years to bring back official attendance figures that weren’t just based on murky guesses.

But, as noted previously in this series, the reverberations of the fair’s racist and bigoted past actions are still palpable to this day. And that simply shouldn’t be the case with an event that ostensibly dedicates itself celebrating and supporting Texans. We can’t believe we have to point out something this obvious, but ignoring or running from past problems doesn’t solve past wrongdoings; addressing them does.

To its credit, the fair has begun doing this, having named its annual Humanitarian Awards Ceremony after Craft, who died in 1985 and who the fair itself notes “played a crucial role integrating the State Fair of Texas.”

But it can certainly do more.

In June of this year, the Dallas Morning News reported on the disrepair into which her longtime residence had fallen. As that piece noted, the house, which has served as a city-run civil rights museum and marked landmark since the ’90s, is no longer being used for its prescribed purpose because it needs upwards of $1 million to be restored to its proper state and, eventually, reopened for its intended use. In September, though, the DMN reported exciting news on this front: Between a $500,000 grant from the National Park Service and an additional $250,000 squeezed out of the city’s annual budget, the Juanita Craft House has been able to miraculously accumulate three-fourths of its fundraising goal.

Is it too much to demand that the State Fair of Texas kick in the remaining quarter-million? No, we don’t think so. If the State Fair of Texas is the economic driver it claims to be (spoiler: it isn’t), then that’s chump change. Hell, if he could be bothered to remember his own salary, fair president Mitchell Glieber could donate that amount out of his annual salary and still be, by far, the highest-paid state fair executive in America. Considering the constant damage that the fair has done to the predominantly communities that surround its grounds over the years, putting the Juanita Craft House — itself located in Fair Park’s shadow — back in business is the least it could do.

There’s a word for what we’re talking about here, isn’t there? Ah, yes, we remember now: Reparations.

Cover photo of 1955 State Fair of Texas picketing by R.C. Hickman via the Bullock Museum.