Why The State Fair Of Texas Sucks: Because Of Its Role In Systemic Racism. 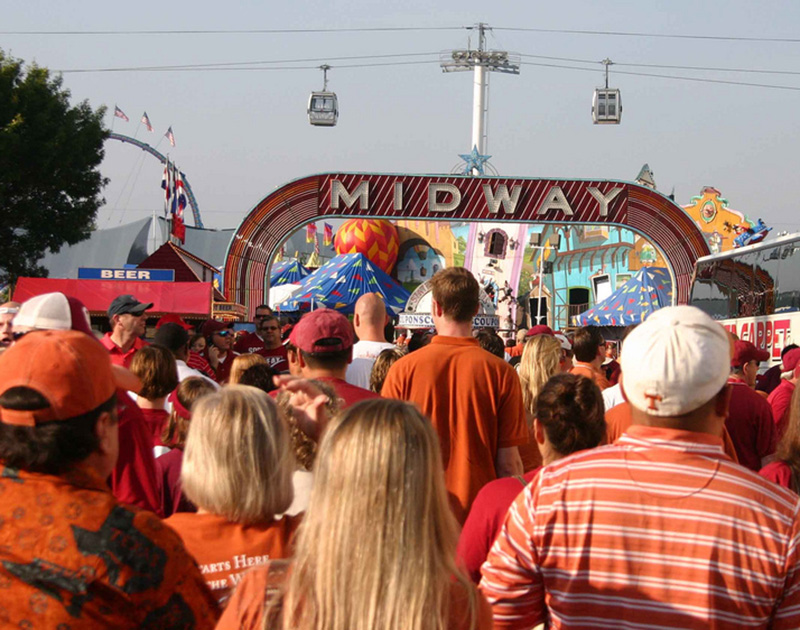 Since 1966, The State Fair Has Gone Out Of Its Way To Shield Its Affluent White Attendees From Having To See The Poor Black People Who Live Near Fair Park.

More than two weeks ago now, we kicked off this series with a look into of the State Fair of Texas’ shockingly racist history — specifically, how the State Fair, in its 1920s iteration, was so welcoming of Ku Klux Klan members and their families that it even hosted an official KKK Day in 1923.

Sure, as some of our more fair-loving readers were quick to point out, most cities in America were pretty racist back then.

In that same piece, we also wrote about how, on October 23, 1923, the fairgrounds hosted the largest KKK member initiation ever.

Again, reaction to that fact was mixed, with some readers arguing that an event that happened almost a century ago has almost nothing to do with how things at the State Fair of Texas or in Dallas are today.

But, fact is, things haven’t really changed as much as people might think they have. A report released earlier this summer by the Foundation for Community Empowerment proves what we have always known deep down but now have hard evidence of: It shows that the State Fair of Texas organization really couldn’t give a shit about the black-majority neighborhood surrounding Fair Park in South Dallas.

Specifically, the Foundation for Community Empowerment report offers up a damning citation of a different report commissioned by the State Fair in 1966 where officials shared what their research said needed to be done in order for white, middle-class families to be more comfortable while attending the fairgrounds.

Read that report: “The solution for all of these conflicts, at least in terms of Fair Park’s location, is simple. All that is required is to eliminate the problem from sight. If the poor Negroes in their shacks cannot be seen, all the guilt feeling revealed above will disappear, or at least be removed from primary consideration.”

Go ahead and point out that this statement was made 51 years ago if you must. There’s still no denying that this is the exact play that the State Fair of Texas employed as it moved forward from that report’s release. Land grabs were made. Parking lots were constructed. Fencing was built. And, just like that, the Stare Fair of Texas did what it wanted to with the predominantly black neighborhood surrounding its fairgrounds: It moved it out of sight and out of mind.

Frankly, if you’re a person of color who grew up in South Dallas, Oak Cliff, Pleasant Grove, West Dallas, Northwest Dallas, East Dallas or any area of Dallas that was neglected until developers wanted your neighborhood, the language from that 1966 report shouldn’t shock you. Sure, the words it uses are a bit old-timey, but the truth is you’ve always known that an ever-present specter of racism inhibits most everything having to do with how this city is organized.

That the State Fair of Texas was built on these same principles is no surprise at all. It’s also no huge reveal to learn that, as affluent white families moved to the “better” areas of Dallas or just completely embarked upon classic white flight out the the suburbs, the systemic racism that the City of Dallas has likewise historically used to keep South Dallas from prospering was exacerbated by clear efforts on the State Fair of Texas’ part to further hide our city’s people of color and less prosperous residents from view.

Hey, Chad and Stacy from the ‘burbs must be protected by any means necessary from feeling guilty as they relive fond memories of eating corny dogs and riding the Ferris wheel!

But the grossest thing about all this? It’s that it worked. South Dallas and its more-than-fucked residents are the last thing on these families’ minds as they enter the bubble that is the State Fair of Texas each fall.

Fact is, the State Fair of Texas’ willingness to just turn a blind eye to legitimate concerns is part of why Fair Park is in its current physical state, what with its architecture crumbling or its nearby property values dwindling. More than that, it’s cruel: Visiting the State Fair of Texas is an expensive proposition for even those in the middle class, let alone for the people who live in Fair Park’s shadow; and, worse, the millions of dollars the fair generates are used to line the pockets of its executives rather than going anywhere near any efforts to better the neighborhoods that it so carefully hides from view.

That the State Fair of Texas generates dozens of millions of dollars every year and outright refuses to do a goddamn thing for the South Dallas families who live closest to its operations has to be among the most significant ongoing injustices — if not the single most significant one — in Dallas’ almost 176-year history.

So, here’s the thing: If you’re going to suggest that we forget the past and move on, then we’re gonna say the same to you.

Fuck your fond memories of the fair.

Fuck your participation in an event that is a drain on Dallas infrastructure.

Fuck your prioritization of corn dogs over improving the living situation in South Dallas.

Fuck your support of an event that demands your taxpayer dollars underwrite it when that money could be used to improve Dallas schools.

Fuck your adoration of an entity that goes out of its way to ignore urban blight.

Fuck your love for an event that says it’s centered around a theme of “Celebrating Texans” but can’t be bothered to even acknowledge the poverty of the Dallasites who live less than a couple hundred yards from its grounds.

Only, well, with somehow even less going for it, really.