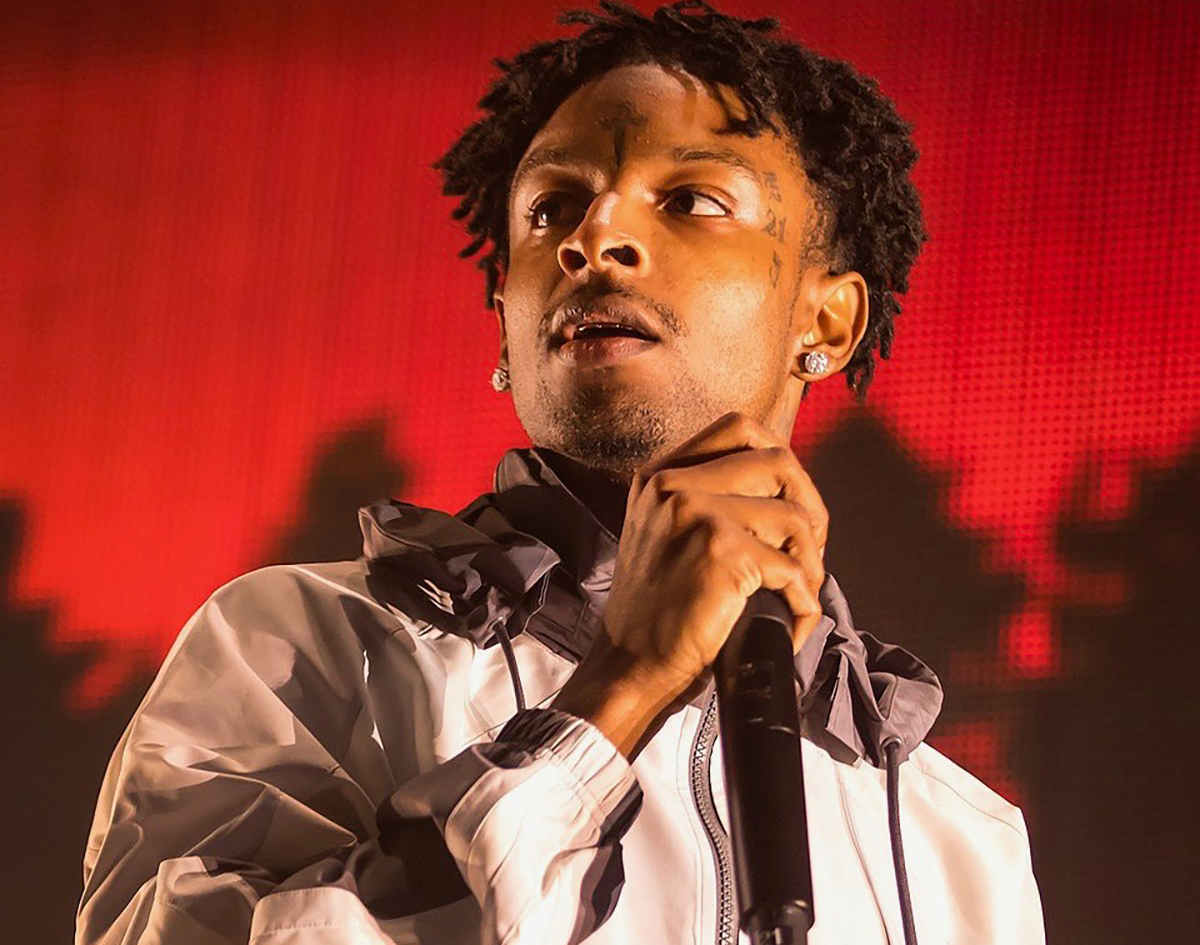 Drain Your Bank Account For 21 Savage, Welcome Scott Stapp With Arms Wide Open, Help Leon Bridges Blow Out The Candles And So Much More.

Today, Rihanna decided to toy with our feelings by hopping on social media to taunt us with the fact that it has been 1,260 days since we got a new album from her.

Listen, we understand she’s out for global domination with makeup and luxury fashion collections, but we cannot twerk to the sound of someone strutting in $600 Fenty lime green-strapped heels.

Nobody:
Me: Album coming in 2019
Navy in July: pic.twitter.com/jXqC6uy1YP

Twitter then went down for about an hour right after RiRi sent the above tweet. We’ll let you do the math.

A wise person once professed “Where is the album? We need the damn album,” but at this point, we will settle for her humming along while she applies eyeshadow. Something. Anything.

In the meantime, take your mind off the fact we’re in the middle of an ass-throwing drought with this list of things to do in town this weekend. — Alec Spicer

The Head & the Heart at Toyota Music Factory
Seattle indie-folk outfit The Head and the Heart achieved fame at the cusp of that weird musical phase western culture went through a little over five years ago. Artisanal guacamole jokes aside, this band is one of the largest torchbearers of that movement, along with contemporaries such as the Lumineers and the Avett Brothers. — Garret Gravley

Sam Riggs at Billy Bob’s Texas (Fort Worth)
This Texas country singer-songwriter founded the Air and Opportunity Adventure Company, a firm that overseas hikes, climbs, private flights and helicopter rides, to provide people with tools to gain confidence and overcome their mental battles. Get you a man who does it all. — Stephanie Salas-Vega

Bellator MMA at WinStar World Casino and Resort
Come hang out with a bunch of people who can quote the movie Fight Club verbatim and watch grown humans punch each other. Anyway, his name is Robert Paulson. — Travis McMillan

Sportscon at Fair Park
No, you’re not dreaming. You can finally stop yelling at atheltes from your couch and do it in person. Whether you’re into of the NFL, MLB, NBA, or UFC, SportsCon allows fans to interact with their favorite athletes through meet and greets, live games and more. — Jessika Hardy

Intergalactic Discotech at Sweet Tooth Hotel
For one night only, The Sweet Touth Hotel is bringing a little bit of outerspace to Dallas. Get ready for a night cosmic lights, holographic costumes, and a lot of partying. (Yes, aliens party. Don’t read too much into it.) — JH

The 24th Annual Dallas CASA Parade of Playhouses at NorthPark Center
A parade of playhouses is every kid’s dream, but some children are not afforded the opportunity to play and have fun. This fundraiser will raise money to help advocates save abused and neglected children, all while featuring custom-designed playhouses from architecture firms and citizens from all over Dallas. — TM

Borgeous at Dallas Live!
Miami DJ John Borger goes by the name Borgeous, which is a lot of fun to say out loud. — TM

For Now at Dan’s Silverleaf
For Now will be celebrating their sophomore album release The Turning! which was influenced by modern jazz, contemperary classical music, visual art and poetry. — TM

Mija at It’ll Do Club
Mija is a Phoenix, Arizona DJ who has been hailed by Billboard as one of the “female DJs you need to know.” She has also released several albums on Skrillex’s OWSLA label. What more could you need for an EDM resume? — TM

New Bohemians at Deep Ellum Art Co.
Deep Ellum legends New Bohemians have been one of the most resilient Dallas acts of the last 30 years. We are not saying certain substances aid in the enjoyment of their instrumental sets, but we are not not saying it. — TM

Leon Bridges B-Day Bash at Jefferson Tower
Fort Worth soul singer Leon Bridges is celebrating his 28th birthday with the help of DJ Sober and many more. A portion of the proceeds from the night will be donated to the KEEN charity, a group that focuses on education and arts programs for children in Tarrant County. Mr. Bridges truly is a hometown hero. — TM

Scott Stapp at House of Blues
We occasionally clown on some of the artists on this feature in good jest, but to do that to one of the biggest punching bags in rock music over the past two decades would just be too easy. So we’re not going to do it. Just know that the Creed frontman is coming to town, and do with that information what you will. — GG

Dylan LeBlanc at Club Dada
Rough Trade artist Dylan LeBlanc has collaborated with Emmylou Harris and has toured with the likes of Lucinda Williams and First Aid Kit. Those accomplishments should speak for themselves. — GG

The Chats at Three Links
That Chats is a “shed punk” band from Australia that love beer and “smoko.” Cheers? — SSV

21 Savage at South Side Ballroom
After the shocking and devastating news of his arrest by the U.S. Immigrations and Customs Enforcement, Atlanta-via-London hip-hop sensation 21 Savage is persevering and still touring the U.S. This summer, the “Bank Account” rapper is scheduled to make his first DFW appearance since his co-headline gig with Post Malone at Toyota Music Factory. — GG

Bun B at Sandaga 813
Unfortunately it is Cancer season, so Bun B is hosting a birthday party for all of you crusty crustaceans at Sandaga 813. — TM

I Am Dallas Hip Hop at Granada Theater
The second annual #IAmDallasHipHop event will feature a menagerie of local hip-hop artists from the city of Dallas. Now that’s Dallas AF. — TM

Soul Clap at It’ll Do Club
Soul Clap, who hail from outer space, will are bringing their “Ready to Freak” tour to North Texas. Maybe we can find out if aliens freak differently than we do here on earth. — TM

Ten Hands at Kessler Theater
The playful and political band from Denton has returned from hiatus and is bringing their funky, psychedelic sound back to the Dallas. — TM

Sleezus Fist with Worm Suicide at Andy’s Bar (Denton)
Some people might ask “What is Worm Suicide?” but we feel the needs to ask “How are the worms?” — TM

Two:Tone with The Insiders at Ruins
Not to be confused for a wedding band, the Bristol-native duo of Ben Payne and Joe Wills is so much more than that. The band’s deep drum and bass tracks have released under a bevy of respected labels, including Renegrade Recordings, Metalheadz, Creative Source and others. They could probably still play at your wedding, if you’re into that. — SSV

Khalid at American Airlines Center
Khalid kind of sneaked up on everybody in the whole music industry, and long story short, he is now playing arenas. After his feature in Logic’s “1-800-273-8255,” the El Paso R&B singer-songwriter would go on to collaborate with Lorde, Swae Lee, Billie Eilish, Post Malone, SZA and, oddly enough, Kane Brown. He was an opener on Lorde’s Melodrama Tour and, just last month, made his debut on Saturday Night Live. — GG

Lunar Vacation at Three Links
Atlanta’s self-acclaimed “pool rock” outfit Lunar Vacation released its second album, Artificial Flavors, last year. So it only makes sense that, this year, the band is embarking on its first ever tour. This particular offering appears to be the band’s Dallas debut, and it will be sharing that milestone with openers The Slaps and Hall Johnson. — GG

Ringo Deathstarr at Main at South Side
Ok, this three-piece shoegaze band out of Austin totally named their band after The Beatles’ Ringo Starr and the Star Wars Death Star, and you know what? Good. — SSV

Mason Jennings at Kessler Theater
Mason Jennings is a folk-pop singer-songwriter from Hawaii who got his start performing weekly gigs at 400 Bar in Minneapolis, Minnesota. His album “Songs From When We Met” was written while Jennings was living out in the woods and was inspired by falling and healing. Aside from being a musician, he’s also a painter with an Esty page full of his one of a kind paintings. We love that. — SSV

Skold at Trees
Tim Skold is Swedish multi-instrumenalist who has toured with acts such as Shotgun Messiah, Marilyn Manson and KMFDM. He kind of looks like Marilyn Manson’s son, even though he’s two years older. — SSV