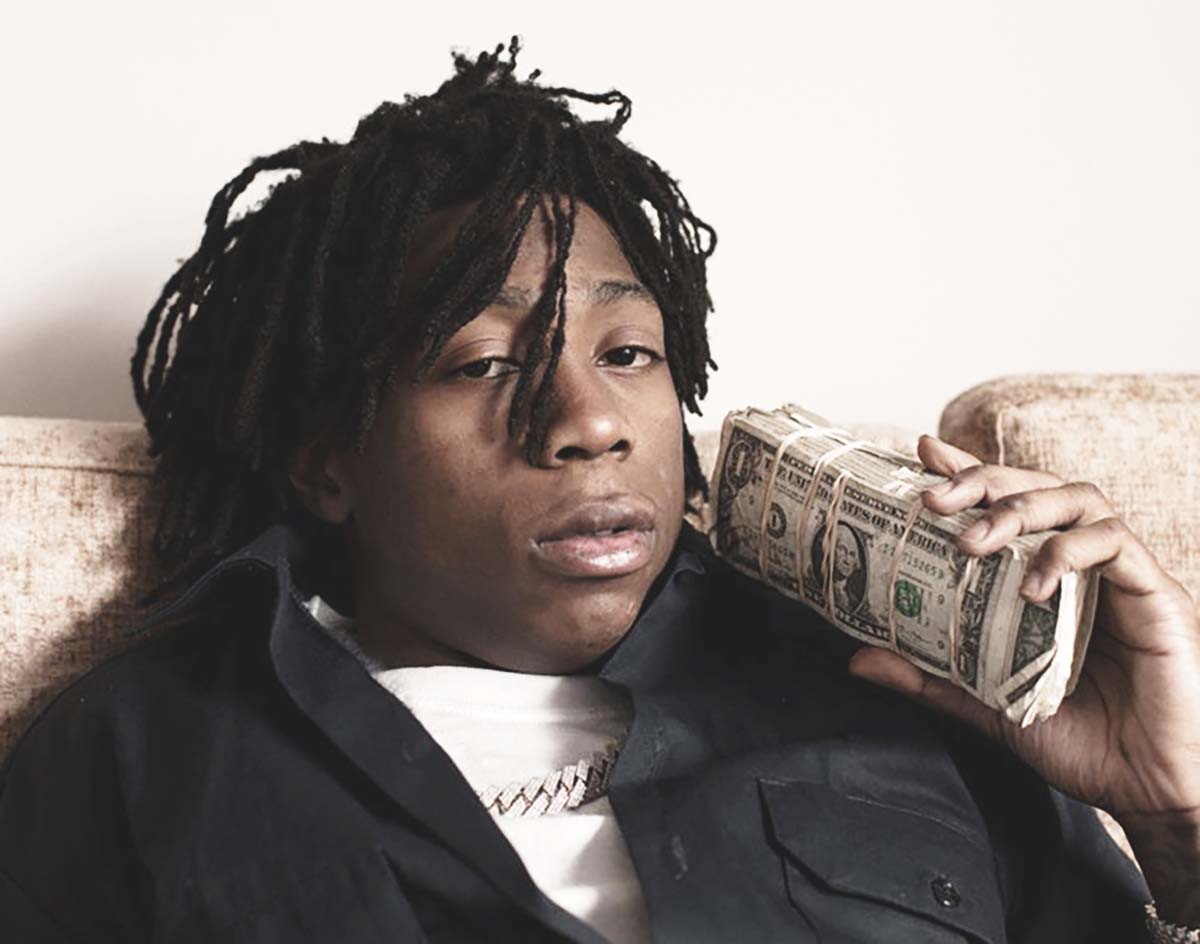 Dallas rapper Lil Loaded has been a fixture in the headlines in recent years — for good reasons and bad reasons alike.

On the positive front, he’s been riding high during this stretch thanks to the success of his 2019 viral hit single “6locc 6a6y,” which just went RIAA-certified gold last week and has amassed more than 29.3 million YouTube views at time of this writing. That success found him eligible for this year’s XXL Freshman list and scoring festival bookings at events like Rolling Loud later this summer.

On the negative side of the coin, the Epic Records-signed performer born Dashawn Robertson has at the same time found himself mired in legal issues relating to the October 25 death of 18-year-old Khalia Walker for which Robertson had recently been indicted on manslaughter charges. Today was supposed to represent Robertson’s next court appearance, but that moment will now never arrive.

On Monday, the Dallas County medical examiner’s office confirmed that Robertson had been pronounced dead at the age of 20. Despite rampant speculation, no official cause of death has yet been released.

In the wake of the news, Lil Loaded’s lawyer Ashkan Mehryari expressed surprise at the performer’s passing, calling it “very tragic” and saying that he “had a very bright and promising music career ahead of him.”

Meanwhile, nine months after the tragic death of Power Trip frontman Riley Gale, the Dallas County Medical Examiner’s office confirmed to Rolling Stone that his death was caused by the toxic effects of fentanyl, a powerful synthetic opioid commonly used to cut street drugs like heroin and cocaine. The 34-year-old’s death was ruled an accidental overdose. In the wake of Gale’s passing, the youth LGTBQ+ center Dallas Hope Center announced that its library would be named in the metal icon’s honor. The organization is still accepting donations in Gale’s name here.

If you’re experiencing mental health complications, drug abuse issues or suicidal ideation, we recommend reaching out to our friends at Foundation 45, a Deep Ellum-based group that aims to help those within the arts community who are facing these concerns.

To that end, May 31 marked the 100th anniversary of the Tulsa Race Massacre, in which white residents (with government assistance) brutally laid siege to the burgeoning Greenwood District of Tulsa that was then known as Black Wall Street. In honor of the victims of that racist American tragedy, Dallas’ Turtle Creek Chorale — which boasts the distinction of being the most recorded male chorus in the world — announced this week that it will perform the newly commissioned Dreamland: Tulsa 1921 at Carnegie Hall, as well as in Dallas, the summer of 2022. The piece was composed with the help of Black librettist and American playwright Sandra Seaton and Black composer Dr. Marques Garret, who were inspired by Mary E. Jones Parrish’s book Events of The Tulsa Disaster, which chronicles first-hand experiences of the disaster through the eyes of those oppressed. While initially intended to be debuted this year, performance is being pushed to accommodate pandemic safety protocols throughout rehearsals. It will make its formal bow as part of the TCC’s larger Let Us March On! concert dedicated to racial equality.

Celebrating the present, The BET Awards rolled out their 2021 list of nominees last week, and decided to show the Grammy Award-winning, Megan Thee Stallion song “Savage” — co-written by Dallas’ Bobby Sessions and produced by local hitmaker J. White Did It — some love with a Viewer’s Choice Award nod. Fellow local Kirk Franklin is also nominated for the Dr. Bobby Jones Best Gospel/Inspirational Award for his song “Strong God,” and the Tyler native Kansas City Chiefs quarterback Patrick Mahomes got a nod in the Best Sportsman category.

Speaking of Sessions, he recently released a new single with Benny The Butcher and Freddie Gibbs — the latest taste of his forthcoming debut LP Manifest for Def Jam:

Meanwhile, Sessions’ fellow Dallasite and labelmate Kaash Paige appeared on the popular Women of Marvel podcast to talk about her work on the Black Panther comic series that both she and Sessions helped to pen.

Another Dallas rapper making moves is Jason Lyric, who can be caught showing off his kicks in a New Balance ad that also features his music:

Also collaborating well with others of late (as ever), Fort Worth’s Leon Bridges released a new Anderson .Paak-directed music video for his new single “Motorbike.” which stands as the first single off Bridges’ forthcoming third studio LP. As such, Bridges also announced pre-orders that said release, called Gold-Digger’s Sound and set to drop on July 23.

At this point in his career, there’s no reason to be shy about giving Bridges his flowers — and that’s a sentiment even the state government can get behind, as Bridges was recently named by the Texas State Legislature as the 2021 Texas State Musician — a role similar to a poet laureate’s. The appointment is important for a few reasons: Beyond his being the first North Texas to earn that title since its introductions in 2003, he is also the first Black musician to be celebrated. Congratulations to Leon!

Congrats, too, to his fellow North Texas-sprung Grammy winner, Demi Lovato, who has come out as nonbinary since you last heard from us. Lovato’s pronouns are now “they/them” — a revelation that came on their own 4D with Demi Lavato. Said Lovato: “I feel that this best represents the fluidity I feel in my gender expression and allows me to feel most authentic and true to the person I both know I am, and am still discovering.” Later, Lovato went on Jane Fonda’s livestream series Fire Drill Fridays and told Fonda in so many words that years of living under the thumb of the patriarchy had stifled her not only as an artist but as a human being as well.

St. Vincent — who is never one to be stifled — has been getting a lot of love lately from sources as far-reaching as Vogue following the release of her new Daddy’s Home LP. But are she and Golden’s own Kacey Musgraves — who also recently confirmed to Rolling Stone a new album coming this year — letting their PR teams do too much in terms of release promo? That’s the question Texas Monthly writer Emily McCullar is asking these days.

On the other hand, omnipresence seems to work out well enough for Grapevine’s Post Malone, whose wine brand Maison No. 9 just expanded to the U.K. right around the same time Posty appeared in DJ Khaled’s new video for “I Did It” alongside Lil Baby, DaBaby and the aforementioned Megan Thee Stallion.

You can also catch the man born Austin Post as one of the headliners of Lollapalooza this year. Meanwhile, St. Vincent can be found headlining Day 2 of Pitchfork Fest, and Dallas icon Erykah Badu will headline Day 3 of the same proceedings. Badu and St. Vincent will also share the stage at Austin City Limits this year as well.

And Fort Worth R&B singer The World Famous Tony Williams — a cousin and frequent collaborator of Kanye West — dropped a stop-motion video “Everybody Knows” featuring Wale and some additional familiar local faces.

Four-time Grammy-winning multi-instrumentalist, producer and composer Michael League of Denton’s Snarky Puppy also announced that he’s penned his first solo album — a release called So Many Me that is due out June 25 on GroundUP Music. Check out its lead single:

Dallas indie band Luna Luna and Pretty Boy Aaron — regular collaborators themselves — also got back together on their latest funk-fueled cut, “Golden.”

Denton emos The Altitude also released their first video — for the song “Ungrateful” — and it’s got some lo-fi Bright Eyes appeal.

Fellow country singer Joshua Ray Walker, meanwhile, was once again featured in Rolling Stone — this time for a shot-for-shot video remake and cover of Lionel Richie’s “Hello” that Walker says was actually shot entirely on his iPhone.

Also getting some nice ink is the Dallas/Philadelphia electronic pop-rock duo Welcome Center, which received some accolades from SPIN, which recently named the band’s new “Parasite City” release it “Video of The Day.”

Also dropping new music is the Dallas punks in From Parts Unknown, which dropped a new single about human beautification and the existential dread that accompanies it called “Blood and Teeth.”

Mwanwhile, their frequent cohorts in Bullet Machine released a lyric video for their new “Let’s Save The Skatepark” jam.

And Sloth Fist, which shares a member with Bullet Machine, was named one of 10 new alternative bands you need to hear immediately by Alternative Press.

Then there’s Denton’s Infernal Legions of Mordor, which received praise on CVLTNation.

Sticking on the local beer-meets-music front, what if Martin House Brewery announced they’d be celebrating Christian rock band Creed this summer? Well, they did, and it’s happening on June 26, headed up by a Creed cover band by the name of Kreed.

Speaking of shows, Taste of Addison announced their 2021 return for June 3 and 4 with headliners Third Eye Blind and Flo Rida. And Texas’ longest-running electronic music festival Lights All Night announced both an expansion to Puerto Vallarta from November 4 to 7 (tickets here) and also confirmed that it would once again be bringing its end-of-year bash back to the Dallas calendar later this year after taking 2020 off because of COVID-19 concerns.

Meanwhile, community radio station 89.3-FM KNON announced that it will be hosting its first blues benefit since the onset of the pandemic, too. That event, which stars Shawn Pittman and the release of his latest album Stompin’ Solo album, will take place at Poor David’s Pub on June 11.

Finally, we bid adieu to much-loved Dallas promoter Marcos Gonzales, who lost his battle with cancer on May 18. Among other noteworthy achievements, Gonzales ran the record label Sinners Records TX and was known for bringing international punk and hardcore acts to Dallas to perform with locals.

May he, Lil Loaded and Gale all rest in peace

Cover photo via Lil Loaded’s Soundcloud page. Got a tip for White Noise? Email us!