White Noise: Is Dallas Music Ready To Go Mask Off? 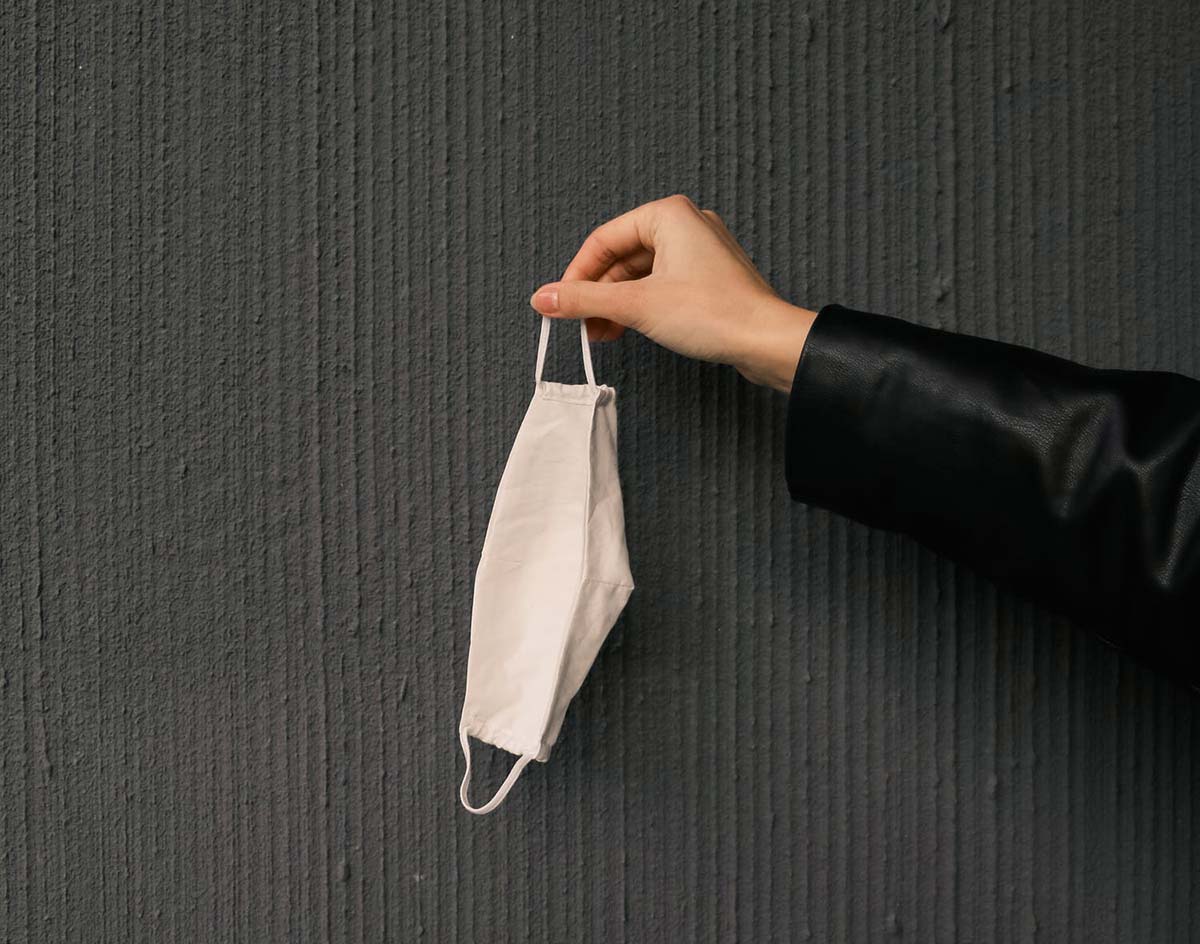 Venues Steel Themselves To Deal With The State’s Latest Mask Rules, Locals Are Set To Dominate The GRAMMYs And Miranda Lambert Starts A New Local Trio.

In the wake of Gov. Greg Abbott abruptly — and preemptively — ending the mask mandate and allowing all Texas businesses to operate at 100 percent capacity again, things have been pretty wild around these parts!

“Today’s announcement does not abandon safe practices that Texans have mastered over the past year,” Abbott said at his announcement press conference. “Instead, it is a reminder that each person has a role to play in their own personal safety and the safety of others. With this executive order, we are ensuring that all businesses and families in Texas have the freedom to determine their own destiny.”

Of course, many retail workers and service industry types feel differently about the public’s supposed “mastering” of safe protocol.

Still, as a few venue owners told the Dallas Observer this week, the new rules could mean a quicker return to live music. Fortunately, it seems many of the venue owners quote in that piece — among them Three Links‘ Scott Beggs and the Double Wide‘s Kim Finch — are planning to keep following CDC regulations and operate at lowered capacities until the science suggests it being safe to do otherwise. 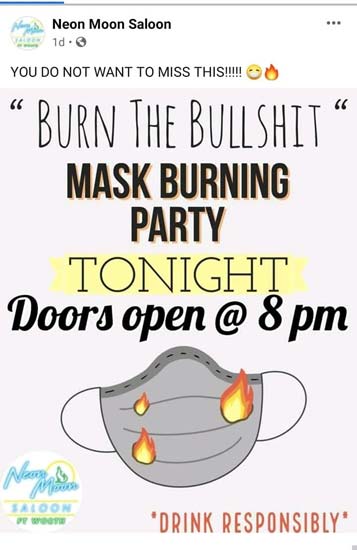 Alas, not everyone in the metroplex is on the same page. In the wake of Abbott’s announcement, Fort Worth’s Neon Moon Saloon shared a since-deleted post on Facebook that advertised a “Mask Burning Party” last Sunday. Most comments on the post appeared to have been negative, which might explain why it was quickly removed. (Also: LOL @ their “drink responsibly” note.)

In general, things are looking up for venues theses days, at least in regards to legislation that may increase assistance to a struggling entertainment industry that over the past year has teetered on the verge of collapse. Believe it or not, the Senate passed their own version of the American Rescue Plan on Saturday. According to the original wording of the act, the bill will appropriate $135 million for the National Endowment of The Arts and an additional $1.25 billion for the Shuttered Venue Operators Grant Program. That could mean more emergency funding streaming into local performance halls that are desperately in need.

Meanwhile, the 63rd GRAMMY Awards are taking off this coming Sunday night at 7 p.m. on CBS — and, across the night, the show will feature performances from countless big-name acts including the North Texas-sprung talents Mickey Guyton, Miranda Lambert, Maren Morris and Post Malone.

Lambert also this week just announced the release of The Marfa Tapes, out May 7. The project is a collaboration with fellow local Jack Ingram and another GRAMMY-award winning Dallasite, Jon Randall. Said Lambert of the project in its announcement: “We wanted you to feel like you were right there with us, sitting around the campfire, escaping the world, disappearing into the music.” The trio also released a video for the album’s first single — called “In His Arms” and featuring Lambert asking if her future love is “playing in some house band in Dallas” — that fits that aesthetic.

Dallas rapper Lil Loaded, on the other hand, earned a win of his own. Last week, the 20-year-old performer was indicted on a charge of manslaughter — instead of murder, as his initial arrest stated — for his involvement with the death of his friend last October. No date has yet been set for the Epic Records-signed rapper’s trial.

On the other end of the spectrum, Selena Gomez dropped a new video with DJ Snake last Thursday for the single “Selfish Love” released that same day. The song, sung in Spanish and English, has risen quickly up the charts, especially international ones. The video is set in a beauty salon with all-male clientele, and Gomez mirroring The Demon Barber of Fleet Street.

Another Dallas music powerhouse also announced some cool news this week: Tripping Daisy is getting ready for the release of their final album (self-titled, 2000) on vinyl for the first time ever. The release will be limited to 1,000 copies and will be available starting June 9 through Good Records (assuming the pre-orders don’t sell out). Different color vinyl variants are available while supplies last.

September Moon, in other news, is a local country act looking to break into the bigtime — they just announced a team-up with Seventy Springs Entertainment that should help to propel them into the national Americana spotlight. Judging by some of the awards they’ve been racking up, September Moon is already well along the way.

In sadder news, the much beloved “Western Swing King” of Dallas, Erik Swanson, died in February at age 57. His bandmates from Shoot Low Sheriff put together a successful GoFundMe campaign to help with funeral costs, and have since surpassed their $7,000 goal. They now ask that readers keep Swanson’s wife Tami in their thoughts and prayers.

Nothing gold can stay. The Denton ska band The Holophonics gets that, having announced that the 16th installment of their MaSKArades album series may be their last cover album. The band is known for performing popular songs to the tune of upstrokes and brass, which includes but is not limited to ska-flavored renditions of the smash hit “Despacito” (the video of which has nearly 2 million views), Saves The Day’s album Stay What You Are, and Jimmy Eat World’s Clarity. Here’s that “Despacito” video for good measure:

“We recorded that about two years ago,” says bassist Chris Bonner with a laugh when we asked for more details. “It took a real long time. I was thrilled when [frontman] Wyatt [Burton] called me and said it was coming out.”

Lastly, filming has now wrapped for the music portion of Denton’s upcoming Thin Line Fest, which will be held virtually this year. That work included documenting performances from 17 acts in two days for a stream that will air March 24 to 28.

“At the first downbeat [of recording] at noon Saturday I got emotional, because I haven’t seen a show in forever,” festival music programming director Bryan Denny tells us.

We anticipated similar feels for the bill, which includes performances from Noogy, Sunbuzzed and Vandoliers. Check out the website for more info on where to tune in.