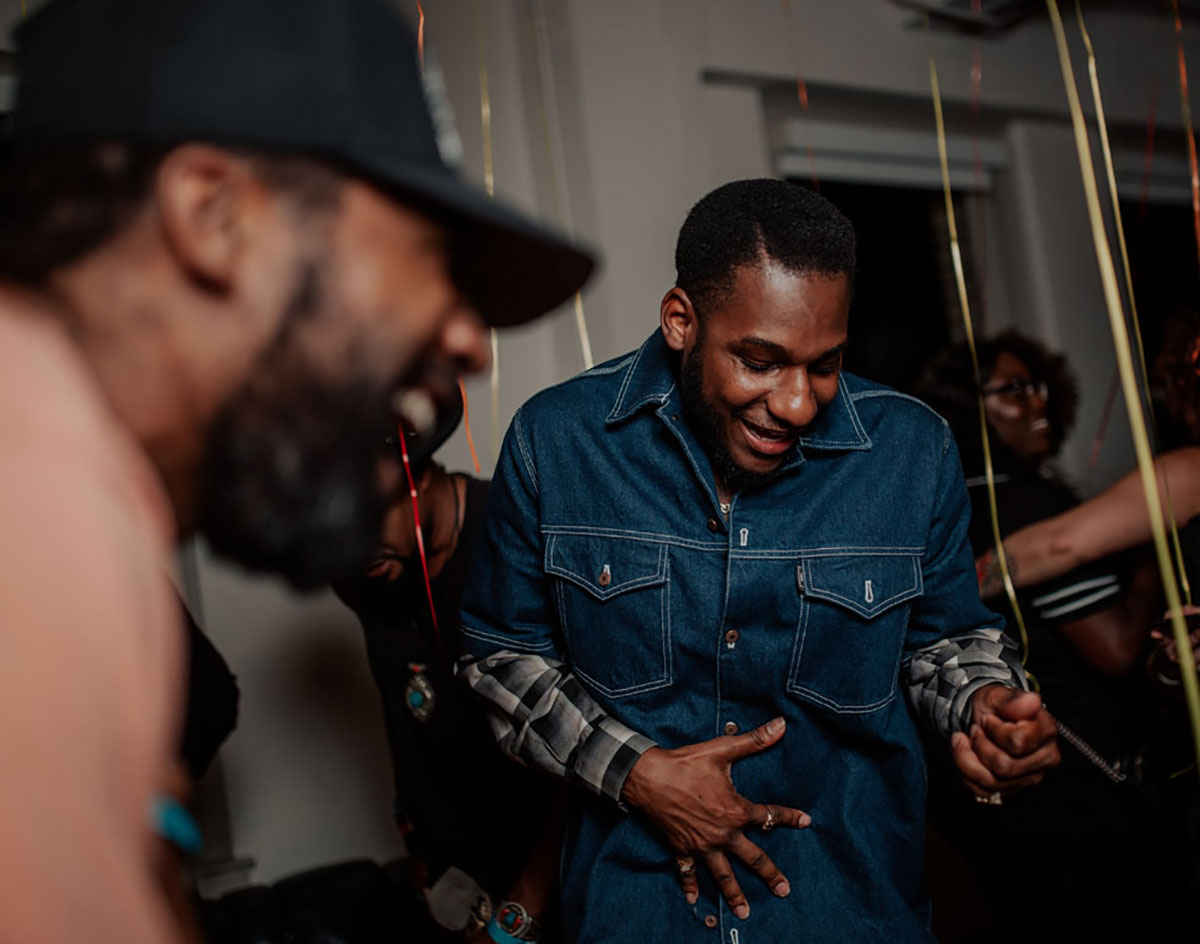 The Grammy-Winning Fort Worth Native Does Good Things All On His Own — But He’s Also Been Known To Play Well With Others Throughout His Career.

There’s no debating it: Leon Bridges has put out some of the best North Texas-made music of the last decade.

Since he first burst onto the scene in 2014, his classic style has elicited comparisons to greats like Marvin Gaye and Sam Cooke, earned him a handful of Grammy nominations (including a win!) and allowed him to share stages with the likes of Harry Styles and Pharrell Williams — not to mention audiences at the White House.

What’s perhaps a little more understated, however, is the nimbleness he puts on display when working with other artists. Throughout his career, Bridges has particularly showcased an inclination to work with his fellow Texans — be they southern rap icons or psych-instrumental bands — with whom he has captured some of the most compelling on-record chemistry he’s ever produced. What’s more, he also refuses to be relegated to the confines of any single genre — and, if we’re being honest, we might have gone through life having never heard a Luke Combs song if it weren’t for Bridges’ co-sign and collaborations alongside him.

Along the way, he’s done it all — eclipsed other artists with his features, aptly enlisted features on his own songs and stepped out of his comfort zone — while embracing collaboration en route to creating some of his best work to date. At this point, he’s shown enough lasting versatility to convince us there’s next to nothing he can’t do musically. For the record, we’re fairly certain Bridges would absolutely crush a country album if he ever wanted to dedicate himself to that task.

After a recent stretch in which Bridges has continued his propensity in working well with others, we figured now was as good a time as any to revisit his collaborations throughout the years and provide them a definitive ranking. (To be clear, though: This list is strictly ranking studio-recorded original collaborations; we’ve excluded covers, soundboard recordings of the occasional one-off live pop-ups and efforts produced as part of television specials.)

Point is, when Bridges is good, he’s good. And when he links up with… well, literally anyone, he’s still just as good.

Despite a collection of some pretty stellar connections that Bridges has made with so many artists, this one just doesn’t quite hold its own by comparison. We’re blaming Diplo. But, also, this is the Fort Worth-raised singer’s most recent collaboration — so maybe it just needs time to grow on us?

The reason this slow groove is ranked so low is due to the fact that Bridges’ verse toward the middle of the track is the undoubted highlight. In other words: The soulful crooner washes Shawn Mendes on his own damn song here. That’s not said to chide Bridges, however. Without him, “Why (Remix)” is another sexy but borderline sleepy song in the wheelhouse of Mendes’ airy, hopeless romantic pop catalog.

Of his feature with the oft-heckled Macklemore, Bridges told Rolling Stone the following: “A lot of my friends, they were a little skeptical of the fact that I would do a song with him, but I think it’s great that I didn’t have to compromise.” The song takes aim at the over-prescription of pharmaceutical drugs in the U.S. health system and its understated contribution to the country’s ongoing struggles in battling addiction. It’s not a bad song, per se, but maybe a little disjointed. Again, the Fort Worth native anchors its best parts toward the back half.

2020 was a big year in the Leon Bridges collabo-verse. Until we get a follow-up to 2018’s Grammy-winning Good Thing — secure your wigs, LB3 is coming — we’ll take what we can get. “All About You” is full of smooth “90s R&B influences, and is a solid effort that will have likely catalyzed many quarantine-conceived babies. Also, the stop-motion music video is dope.

Another of Bridges’ 2020-released features is “Better”, which finds the singer armed with his frequent collaborator Ricky Reed, the R&B singer Kiana Ledé and a beat tailor-made made for “lo-fi songs to study to” playlists. This one is simply easy listening — in the best way possible, we’d say.

At first pass, this one might seem like an odd pairing, but Bridges’ touch on the country-adjacent lead single from Noah Cyrus’ The End Of Everything EP makes for a deceptively beautiful tale of toxic love. The Fort Worth native’s soft, soulful delivery here works well in harmony with Cyrus’ folky cadence. File this one under the growing list of proof that there’s no reason Bridges can’t dominate country music whenever he chooses to do so.

What stands out about this rap collaboration, which pays tribute to Houston rap heavyweight Bun B’s late UGK collaborator Pimp C, is that is that Bridges’ contribution actually kicks off the song. In this context, it does what it’s supposed to do, pairing well with Gary Clark Jr’s rich guitar riffs to fully frame Bun’s poignant verse honoring his dearly departed bandmate.

Another powerful performance from Bridges, “On My Own” — released in tandem with UNT alumnus Lecrae — is part of an album inspired by the controversial 2016 film Birth of a Nation, which also features contributions from artists like Gucci Mane, Nas and Trey Songz. The song trials the perils of slavery as Bridges emphatically croons, “I’ve come a long way/From a very hard place/It’s been a hard race/But somehow I found my way home.”

The closing track on Common’s 2019 album Let Love features Bridges on a gorgeous harmonized chorus over soft piano chords. His angelic performance here is the perfect companion to the rapper’s signature crisp flow and Jonathan McReynolds’ tenor. It’s a little gospel, a little hip-hop and a lot of feel-good vibes, which, if you’ll recall, Bridges knows a thing or two about.

This West Coast-meets-The South track from L.A. artist Nick Waterhouse is perfectly suited for Bridges’ timeless vocal style. Also of note: The song was conceived right here in North Texas when the two were getting massages together and the Fort Worth native shouted out “She give me katchi!” which is a Louisiana-Indian term Bridges’ mother long used to describe a loving touch. Bouncy guitar parts and the infectious chorus channel the best of ’50s doo-wop here.

Even if you’re a Grinch when it comes to Christmas music, you’ll probably find yourself making an exception for Bridges’ feature on this lovesick Kacey Musgraves original. And if you do enjoy Christmas music? Well, the clear magnetism between these two Texas greats makes it an easy replacement for the dreadfully creepy “Baby, It’s Cold Outside” on all of your holiday playlists.

The Avalanches’ Robbie Chater long counted Bridges among one of the artists he’s always wanted to work with, so it’s not surprising that when the time finally came, their effort resulted in true electro-pop magic. Delivered as a far-off galactic transmission, “Interstellar Love” is best encapsulated by its closing lyrics: “Like interstellar love shining a light from above.” As we said before, this song is a great conjunction of sounds.

Steel drums open this cheery, empowering anthem — immediately upon hearing it, you’ll find it nearly impossible not to follow the duo’s singing demands of getting up on your feet. Best of luck in trying to get the back-and-forth chorus out of your head, too. For best consumption, we suggest you watch the song’s music video, which capably elevates its celebration of freedom and inclusion. The bright synergy here is undeniable, and these two should absolutely collaborate again in the future.

With his feature on “Across the Room” from electronic music giants Odesza, Bridges stepped slightly out of his comfort zone. An uplifting tune anchored with his rich tone and boosted by gospel-like backing vocals, the song feels like a journey through airy skies that hold the promise of better days to come — all while officiating a harmonious marriage of the artists’ respective styles.

At the height of racial justice protests in response to the deaths of countless Black Americans such as George Floyd and Breonna Taylor last summer, Bridges dropped this heartbreaking, standalone single with L.A. jazz artist Terrace Martin. A powerful protest song, “Sweeter” offers salient commentary on the ongoing struggle with systemic racism plaguing our country. “I cannot and will not be silent any longer,” Bridges said at the time of the song’s release. Also, this is another mandatory-watch music video from Bridges’ catalog.

All four songs on Bridges’ impeccable collaborative EP with Houston-based trio Khruangbin capably showcase the warm chemistry that clearly exists between the psych-funk band and the Fort Worth native. The opening title track perhaps best captures their combined magic, which centers (as the name implies) around an audible equivalent to the Indian-paintbrushed sunsets we are lucky enough to marvel at across the big Texas sky. But instead of limiting it to just one song, they’ve given us this uniquely modern Lone Star sound across an entire album? Don’t get us started on the criminality of this EP being snubbed at the Grammys this year. (Even we will concede that “the number one spot on Central Track’s ranking of Leon Bridges collaborations” doesn’t quite have the same ring to it as “Grammy-winning.”)

Listen to our full Spotify playlist of these collaborations below: