DFW Musicians Tell Us Their Best And Worst Gigs. 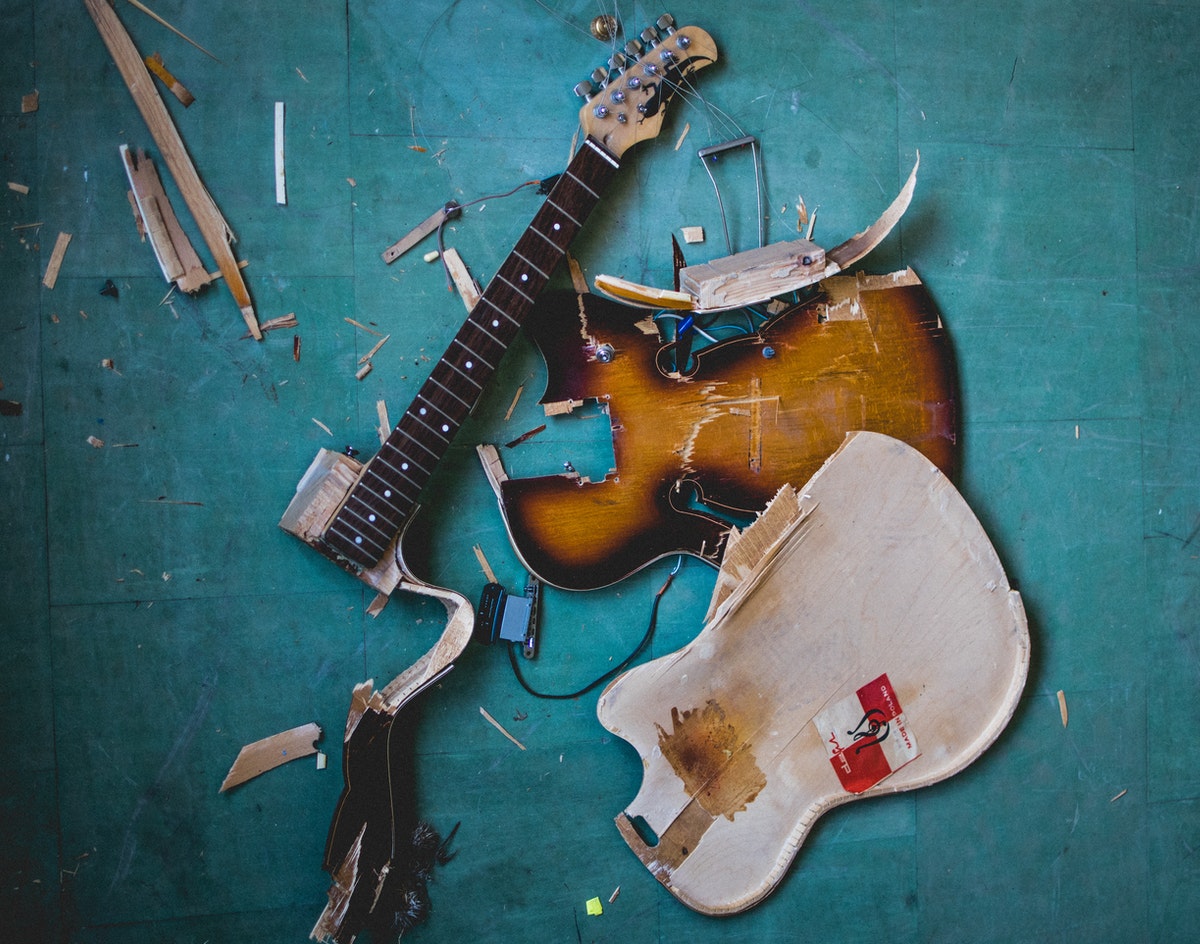 Being a musician is hard. Well first off you actually need the talent, which is a whole journey in itself. You got to spend a load of money on equipment, find venues that’ll book you, figure out how to get your music out there. And after all that, a big crowd is never guaranteed.

But being a musician can also be incredibly rewarding. You get to dedicate part of your life to something you’re passionate about, get support from a community of like-minded individuals and build on a very special array of skills. And sex, drugs and rock n roll and all that.

After this long of covering local music, we got to thinking — what exactly makes a good show good, and what kind of things have gone so wrong that they continue to live in the minds of our musicians? So, we Tweeted out a call and slid into the DM’s of some of our friends in the music scene to see what kind of tales they had to tell. Here are some of the responses we got.

Best Show: “I think the best show I’ve played was opening for Transviolet at Ruins here in Dallas. I had never played at Ruins before and honestly the energy was everything. The show was great and it was fun introducing myself to people that wouldn’t have necessarily known me.

Worst Show : “I don’t think I have had a bad experience doing shows. But my first show was a mess. I was asked to play in Dallas for an EP release and I honestly had no idea what to expect. I got a drummer and had this whole set list on a CD — mind you this was like 2019.

On the way there my friend was giving a run down of everything I should have. He asked if I had music and I showed him this CD. He stared at the CD and started dying.  We were late and halfway to the show so there was no turning back. I was panicking… Thankfully I had an Google drive file of an older version of the show. I was freaking out the whole time but the show went well and Lex (the drummer) killed it!”

We love a story of redemption.

Best show: “Double Wide in January of 2020. It was only our second time playing in Dallas proper and it was right before COVID hit. It was pretty packed and a blast overall. It was also our first and only show with 3 guitarists. We played there again in December and it was just as great, but the 2020 show was our most memorable show by far.”
Worst show: “Backyard on Bell in November of 2019. We played there earlier in October, and that was one of our better shows. But this time it was like 20 degrees outside. It was impossible to play properly since we couldn’t move our fingers from the cold so we kept messing up. It didn’t help that it was one of those shows where the only people watching were the other bands on the bill.”
Hmmm both the best and worst show happened in winter…we’re not sure what that means but it probably means something.

Best show: “Our first show ever at Spinster Records in Oak Cliff — it was a full house. Even though we were brand new, people came out to support. The energy was through the roof and it really motivated us to keep playing shows as long as we can.”

Worst show: “The first time we played at Trees and our singer Albert kept asking for more reverb during the set, not knowing that the general speakers, not monitor speakers,  played back with effects. It made our whole mix sound like a big chamber. We still give him shit about it.
And one of our interesting tales is whenever we were on tour in California. On our off day we decided to busk in an unauthorized section of the Venice boardwalk while drinking alcohol and smoking weed. We almost got arrested and fined — and being Texans didn’t help — our manager had to come to the rescue 😬 “
Let’s hear it for all the managers out there.

Best show: “Thankfully, we’ve had way more good shows than bad ones. I’d say our best was at Main At South Side with The Unlikely Candidates and Jane Leo. The bands were all fucking great, and the crowd was a blast — we had people screaming the words back at us for the first time. It felt like something had changed.”

Worst show: “We’ve only been playing shows for about a year because of the pandemic, but we’ve managed to pile up a handful of stories in that short time. The worst would have to be one we had in Austin the first time we made our way down there. I’ll spare the details, but our best intentions were set on fire and shot to hell pretty quick thanks to a few too many gins and some bad mushrooms. Thankfully, we’ll get our shot at redemption this year at SXSW.”
Not the bad mushrooms!

Worst show: “Ever been deadlined before? It’s when you go on last after the headlining act in a three band lineup and everyone leaves when you go on stage. Bonus points for when your set gets pushed back so late that you get kicked off the stage after your third song because the venue has to close.”

We wouldn’t have left, kings.

Worst show: “Had zero people show up and then the bar manager yelled at us because they lost money lol.”

Worst show: “I was playing in a rap/rock thing called Free Agent. We played at UNT Live ’05 and couldn’t really hear each other at all. A lot of our stuff was super repetitive and relied on certain cues none of us could hear. It was to this day the worst show I’ve ever played. So bad that the bass player didn’t show up to the next rehearsal or call any of us. I didn’t see him for 7-8 years until we ran into each other at a bar. A mutual friend introduced us and we didn’t recognize each other at first. Then I said, “did you play this terrible show in Denton in 2005? And he was like, “yeah, it was so bad we broke up after.

He didn’t realize we kept going and played a bunch more shows. He said the show was so bad he just assumed we broke up.”

We can always count on our man Cory for a good story.

Best show: “Our best show would have to be opening up for Cursive April 30th, 2016 at Gas Monkey. They’ve been a staple influence in our lives for so long and to have the honor was a really humbling experience.”

Worst Show: “I wouldn’t say it was the worst show we have ever played, but it was by far the worst I’ve ever seen another band treat each other on stage. We were on a mini-Texas tour with our friends, Later Days, and were playing a show in Houston at Walter’s. When the headlining band went on was what bands have nightmares about.

I’m not sure I should mention the band’s name –but I will anyway — the headlining band was called Outside at Night. They loaded their equipment on and I started noticing the guitar player having trouble tuning his guitar. It got to the point where all eyes were on him. This went on for about ten minutes. Aggravated, you could see the lead singer fuming, so I tried to help by letting him use my guitar, to no avail. Then the singer had enough and just started putting this poor guy down and screaming at the top of his lungs at him in front of everyone.

Eventually, I think they may have played one or two songs when another technical difficulty [happened]. The singer just starts screaming as loud as he could at the entire band and then stormed off stage. It was by far the most uncomfortable I have ever felt in my life at a show.”

Best show: “It was actually my most recent performance. I run a platform called The Waiting List and back in December we had our first booking at Dal Gala. I had been working on this platform for three years and to get an opportunity to share a stage with my homies/collaborators was all 2014 Graham could’ve dreamt of.

Sooo many things tried to get in the way of that show, literally the day before the event, the initial venue cancelled stating that they weren’t able to handle that many people, so we had to go to plan B. Luckily Khoury at Ear Hustlaz was able to work with us but it meant pushing the show back. We get to the venue, ready to set up and the previous booking is still there jamming — they stay waaaay past their booking time, pushing our event even further back.

[But] the artists are moving around, talking with people. Everyone’s connecting and we all sort of forfeited ourselves to the circumstance. Turned it into a lil’ block party honestly. We were maybe 2 hours behind and still had a full house! Each record went off, people were dancing, some knew the words, everyone was paying attention, and though we ran into some technical difficulties we were able to really show people what we had to offer.”

Worst show: “Back in 2014 I was a part of a showcase at RBC in Deep Ellum, it was maybe my fourth or fifth time performing ever. There was so little I knew about performance, all I did to prepare was rap to a mirror. I get called to the stage, get handed a mic, and start introducing myself.  “My name is Gra -”  the DJ almost immediately cuts me off and starts like 30 seconds into the song. I run up to him and let him know to wait and I run through my intro.

We get to the big hook section where I do a call and response with the crowd and right before the hook, the speakers start cutting out and distorting. People are either not paying attention or looking at me to improvise. Eventually the DJ stopped the song completely. The host starts an intermission to get the sound right. I get off super upset I didn’t get my moment. Today I laugh at how serious I was about it. Just had to take that one on the chin — so glad something like that didn’t deter me!”

Best show: “Might have to be when venues were opening up again in 2021. I had just gotten signed to a local label, I had a new band, I was incredibly nervous. We played at The Groovy Coop in McKinney to a crammed room and right away, from the first beat, I knew everything was different and felt that magic that I felt when I was fifteen. The stage was like a playground. The band sounded great. It was amazing.”

Worst show: “Sometime in 2019 — before the pandemic when I hadn’t figured out what I wanted my sound to be and I was having a hard time performing sober. On top of that, there were several people in the audience I wasn’t expecting to see. So when the set went bad, I had a bit of an emotional episode, which was helped somewhat by my brother being in town to comfort me.”

Some answers edited for length and clarity.