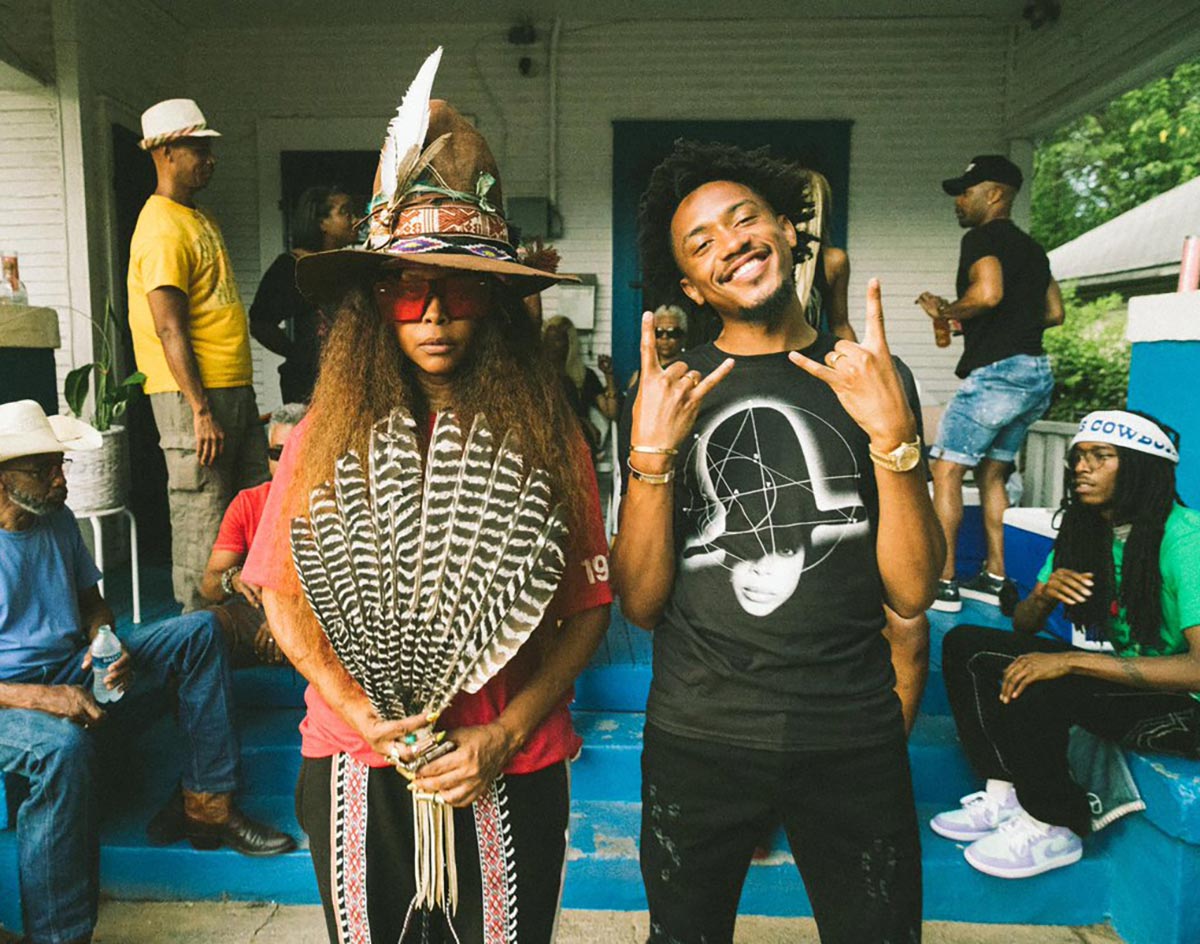 The Standout Single On The Dallas Rapper’s Debut LP For Def Jam Is A Proper Ode To His Hometown, Full Of Glorious References To The City’s Culture.

By the time his debut Law of Attraction dropped in 2014, rapper Bobby Sessions already claimed his own title: “The Legend from Dallas, Texas.”

That was before he was getting praise in national publications. Before he was signed to major label Def Jam. Before his music was featured in the trailer for the international hit video game FIFA 21. Before he was writing for Marvel’s Black Panther. Before his music started showing up in major feature films. And, oh yeah, before the Pleasant Grove native won a Grammy with Megan Thee Stallion.

Before anyone else had proof of Sessions’ legendary status, Sessions made up his mind about it — and now he’s made it happen with his latest album, the June 11-released MANIFEST.

There’s no room for doubt about Sessions’ local status anymore, as his latest music video proves. Dallas’ own has reached the status of a “Triple Deity” and the song that proclaims him as such, produced by Jay Scalez, is an instant classic for the Dirty Dirty Dallas hip-hop scene.

In the music video, Bobby shows that no matter how high he elevates, he’s still true to his Triple D roots. We see local spots like Deep Ellum, Everglade Park and Fair Park. After opening with scenes of Dallas’ skyline, Bobby himself appears in front of the mural of Erykah Badu.

Perhaps the most obvious example of a Triple Deity herself, it’s notable that the Queen of White Rock Lake is a co-star of Sessions’ video. Of course, she’s not alone. In addition to the visual’s Badu appearance, the song’s instrumental pays homage to Dallas by sampling Badu’s “A.D. 2000.” Other familiar faces appear in the video, too, including current MCs Jayson Lyric, 7 Tha Great and T.Y.E Harris, as well as Dallas rap game OGs such as Mr. Lucci and the D.O.C.

Sessions’ affection for and appreciation of Dallas goes deeper than that, though. On the hometown anthem, he kicks off the proceedings with a pretty obvious starting point — his birth.

“Born free ’cause God said it,” he spits before shouting out the local hospital where he came into existence. “Saint Paul, now UT Southwestern.”

Yes, Sessions’ story was literally birthed in St. Paul University Hospital, which was demolished in 2015, then taken over by UT Southwestern.

Less specific to home, Bobby then gets to flashing his signature wit and show off how Southern hip-hop has influenced his sound:

“Tap in, cause God is the Source /
South got something to say /
I’m not an OutKast /
But I outlast /
Anyone in the way”

In the straightforward sense, Sessions is noting that the almighty is the source and provider of blessings in life. But the wordplay of “the Source” also leads us to the next few lines, which nods to both the famed hip-hop publication The Source, which has covered Sessions before, and, more specifically, an iconic moment for Southern hip-hop that came through that magazine’s award show.

Coming from Dallas, Sessions is obviously more than familiar with the far too common dismissal of Southern rap by the coastal elites. In 1995, as mainstream hip-hop was fixated on the clashing sounds and styles of east coast New York City rap and west coast Los Angeles rap scenes, the South and their flourishing new sounds were often ignored. At the 1995 Source Awards, though, Atlanta duo OutKast changed all that. After winning “Best New Group” for their platinum record Southernplayalisticadillacmuzik, the duo was greeted by an eruption of boos from the awards show audience in New York City. In his now-iconic acceptance speech, though, Andre 3000 changed the course of history for hip-hop with six simple words: “The South got something to say.”

Before Andre could get to that point, though, he had inspiration from Dallas in the form of the acclaimed Dallas emcee the D.O.C., who helped pen some of the Death Row label’s biggest hits. OutKast has never been shy in asserting the D.O.C.’s influence over them, either: “As far as Southern rappers… he was like the first real rapper that we looked up to that could really rap.” Fittingly, the D.O.C. also makes an appearance in the “Triple Deity” video — and wearing a Truth To Power shirt, at that.

Sessions also uses the track to explain his Southern inspirations and how they differ from those of the yankees up north: “NY kids did Rakim,” Sessions raps, mentioning the classic New York MC. Then he shares his own early rap game icons: “I was Tum Tum and Big Tuck,” referring to Dallas’ legendary Dirty South Rydaz (DSR) rappers.

From there, he goes into the song’s hook, shouting out the classic hip-hop lines, “I done came down, I done came through.”

In verse two, he again leads with clever wordplay before getting back to showing love to Dallas specifically: “The city love us / Might hit the dougie at my TED Talk,” referring to the iconic, proto-boogie dance and 2007 song by Dallas native Lil Wil. Next, he nods to Nawf Dallas OGs Mr. Pookie and Mr. Lucci (who, yes, also appears in the video): “I’m a crook for life with a crooked smile.” From there, he spits the line “ice cream for my paint job cause I wasn’t content with the same job,” which acknowledges Dorrough’s 2009 hit “Ice Cream Paint Job” — a song that launched Dorrough as one of the select Dallas rappers to boast a platinum hit.

Beyond real recognizing real, Sessions has always shown off his intelligence in his music and at his impressive live shows. Referring to the civil rights hero Malcolm X., for whom a street is named in Deep Ellum, Sessions connects the man born Malcolm Little to Dallas culture: “Intellect on Malcolm X / with a drop shag eating Rudy’s Chicken.” The “shag” — sometimes called a “booty fade” is, of course, a haircut specific to Dallas culture. Rudy’s, meanwhile, is one of the most acclaimed chicken restaurants in the city, and a regular name-drop in classic Dallas rap tracks.

Sticking to Dallas fashion, Sessions further uses his song mention the white tees air-brushed with designs — an unofficial uniform throughout the city during the summer, and especially at the State Fair of Texas. He continues: “Pull up to the State Fair / Be true although shit ain’t fair,” he says, noting, as Central Track has so often covered, that the fair isn’t quite the bastion for Dallas culture that it’s so often projected as being.

But even for Dallas’ flaws, Sessions makes it clear on “Triple Deity” how he feels about his hometown, wrapping up the track with bars that stand as an unabashed love letter to the city:

I made a promise to always acknowledge the place that I’m from /
Dallas I love you with all of my heart /
Even when all the air will dip out of my lungs /
Building a legacy that will be cherished long after I’m gone /
Always expanding /
Remember to travel this planet but never forget about home.

Put another way: As Sessions looks forward to continuing to strive and thrive through all aspects of his career, he knows he must keep a thankful eye toward the elements that shaped him in the city that raised him.

Just like a proper “Triple Deity” should, really. Bless him for that.

Mac McCann is a writer in Austin who grew up in Dallas. His work, covering a wide variety of topics, has appeared in more than a dozen publications across the country. More info can be found on his website MacMcCannTX.com. Follow his ramblings on Twitter, @MacMcCannTX.