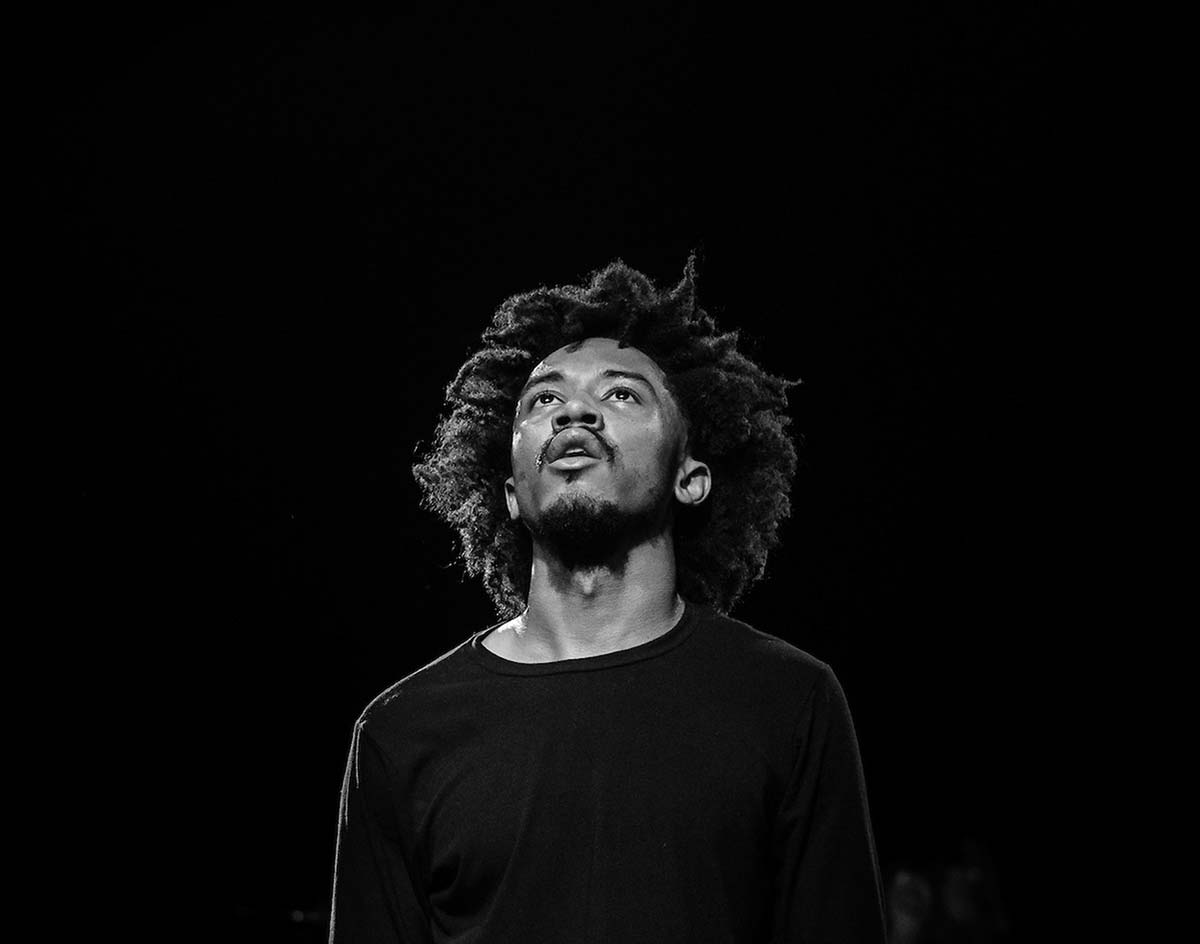 As expected, North Texas musicians took center stage at 63rd Annual Grammy Awards on Sunday — and some even brought home the cake, too.

Sure, Post Malone went 0-for-3 on his nominations during “Music’s Biggest Night,” but don’t feel too bad for our boy Posty. In addition to performing a stirring rendition of his own “Hollywood’s Bleeding” track at the ceremony, cameras caught him having quite a good time while sitting up close to catch Cardi B and Houston native Megan Thee Stallion’s performance of their smash collaborative “WAP” single.

this is my favorite video on the planet #PostMalone #GRAMMYs pic.twitter.com/NJ5C1T0czp

That Cardi and Megan performance entailed a very Lunarite-looking Cardi B leg-wrestling Megan Thee Stallion atop the satin sheets of an oversized mattress. Personally, I’d like to thank the academy.

Megan, actually, was doing plenty of that herself on Sunday, taking home three awards, including Best New Artist and two others for her work with Dallas lyricist Bobby Sessions and producer J White Did It on her “Savage” remix featuring Beyoncé. That song won nods in the Best Rap Song and Best Rap Performance categories.

The Grammys got brought back to Texas for the Culture 🤟🏾🤟🏾🤟🏾 pic.twitter.com/H6VcsRO10Y

Speaking of Beyoncé, she has now surpassed bluegrass singer Alison Krauss as the female artist with the most Grammy wins at 28. That makes her now tied with Quincy Jones for the second most Grammy wins in history, with Hungarian-British conductor Georg Solti sitting in the lead at 31.

Rising Arlington country star Mickey Guyton might not have won any awards on Sunday, but she put on a stellar performance of her smash country hit “Black Like Me” that featured a gospel-like choir backing her up. Expect her to become an awards shot fixture on the back of that effort — and sooner than later. It was revealed on Thursday that Guyton will co-host the 56th Annual ACM Awards with Keith Urban on April 18, becoming the first-ever black woman to host the award show in 56 years.

This still feels like a dream. I couldn’t have done this without you. Thank you for your prayers and love on a day that I will remember forever. This is for my son. Everything that I am is for him. 🖤https://t.co/J4U53LKUqc pic.twitter.com/JxAqSmpBDJ

“As I’ve said before, ‘If you can see it, you can be it,’ and it’s such an honor to step onto the ACM stage as the first ever Black woman to host the show,” Guyton said in a statement. “Over the years, the Academy of Country Music has always been a home for me through opportunities both onstage and throughout their work on diversity and inclusion. This is a moment of great significance for me and I am so thrilled to share it with all the fans.”

Borderline North Texan Miranda Lambert also performed on Sunday, singing her nominated song “Bluebird” while backed by a pandemic-cautious band donning black masks. After her set, she in turn introduced another Arlingtonian, Maren Morris, who performed her own smash single “The Bones” with industry legend John Mayer.

Of these three standout North Texas country performers, though, only Lambert walked away with a Grammy, winning Best Country Album for Wildcard.

Oh what a night!🌟It was a different kind of #GRAMMYs but I’m happy we were able to celebrate! I’m beyond thankful to be part of our Nashville family. Got to see some friends in person & on facetime. And y’all…my date…🔥❤️Thanks for believing in Wildcard 💙it means the world pic.twitter.com/srYyP6w9i0

Of course, you know that the formerly Denton-based Snarky Puppy won an award too — their fourth at this point — and took home the Best Contemporary Instrumental Album award for Live At The Royal Albert Hall.

We are so humbled to receive this award from the @RecordingAcad ❤️

Our album “Live at The Royal Albert Hall” embodies all facets of the music industry: From the energy of the audience to the band as performers to our label @groundupmusicny and our partners @LHN_Recording… pic.twitter.com/8VMw3VjGsK

North Texas-raised musician John Beasley also took home his first win this year in the Best Arrangement, Instrument or A Capela category for his song “Donna Lee,” and the Dallas-based Spinderella, fresh off her beef with her Salt-N-Pepa bandmates over their Lifetime movie, was honored as part of the crew while taking home a lifetime achievement award.

The ceremony also acknowledged Dallas icons Charley Pride and Trini López, who both died last year of COVID-related illnesses in a separate in memoriam segment.

Dallas metal icons Power Trip live on despite fallen frontman Riley Gale’s being snubbed in that section of the show — and losing in the Best Metal Performance category to past Gale collaborators Body Count.

Its surviving members spoke with the L.A. Times just days before the ceremony in their first interview since Gale’s passing. In the piece, drummer Chris Ulsh said, “Losing Riley was the saddest thing that ever happened to me, but I’m so proud of everything we accomplished together. One of the coolest things from the start was that there was no ceiling to this band, and this Grammy nomination is a perfect example of that.”

Guitarist Blake Ibanez added that the band would love to play with each other more in the future, although their wounds are still fresh and that future is blurry at best.

Thank you to the @RecordingAcad and all the nominees. A big shout out to Riley Gale, Rest In Power 👊🏽 https://t.co/rdw7TTl7IM

Completely unrelated to the academy — but not far off from Body Count! — Denton punk crew Calculated Chaos’ song “Cops Kill” was included on a comp from 1312 Punk and Metal News features 100 punk bands from all over the world singing songs to the notes of A, C, A and B. Other titles on the release include “Police State, U.S.A.” and “Gentrify My Balls”.

Meanwhile, Fort Worth’s The Cush just signed with Ben Harper’s Mad Bunny Records. In an interview with American Songwriter, the husband and wife duo said of the move: “It’s just like we’re all in sync; we get each other and he definitely gets our music.” The band has also released a new music video for its song “Haters”  in preparation for their forthcoming album, Riders In The Stardust Gold.

Also getting shine this week is the wunderkind 17-year-old Dallas drummer J.D. Beck who was in part the focus of a fab New York Times profile piece alongside his collaborator the 19-year-old French keyboardist, composer and producer DOMi. The write-up follows the prodigious young musicians through their young career spent playing alongside Snarky Puppy and Erykah Badu. The writer guffaws at the pair’s ridiculous skillset: “J.D. BECK AND DOMi ARE SO YOUNG AND VIRTUOSIC THAT IT FEELS AS IF THEY MUST BE KIDDING YOU.”

Dallas R&B/soul singer Liv.e, who has now taken root in L.A., also received a bigtime write-up with a feature for Vogue in which she discusses the love/hate relationship she had with her hair before accepting it as another extension of her own creative expression. As she told the magazine: “All relationships take time. Don’t get discouraged. If someone tells you not to do something that you want to do, do it anyway. Sometimes people just don’t understand your vision.” Along with that interview, the singer dropped a new video for “You The Only Fish In The Sea” off her 2020 album, Couldn’t Wait To Tell You…

And, just today, it was announced that Dallas’ own St. Vincent will serve as the musical guest on Saturday Night Live — she last performed on the show in 2014 — on April 3. That appearance will come about a month before the arrival of her forthcoming Daddy’s Home LP. Golden Globe winner Daniel Kaluuya (Judas & The Black Messiah) will host.

Dallas melodic skate punks Nonstarter also released a new video targeted at anyone who has ever dined on a bologna sandwich at Lew Lew. The video for “Post Lew Sterrett Blues” explores some of the consequences of having a few too many and getting behind the wheel.

Meanwhile, the Dallas Observer has been taking stock of what Deep Ellum looks like in the wake of the mask mandate’s lifting. Their report finds that the It’ll Do Club was the only open establishment in Deep Ellum last Thursday night that was requiring masks.

Out in Fort Worth, however, they’re way ahead of that game: Staind frontman Aaron Lewis played for mostly maskless crowds at Billy Bob’s and remarked that it was “so great to see everybody without a mask on.”

These are the times we live in.

Bobby Sessions cover photo by Karlo X. Ramos. Got a tip for White Noise? Email us!