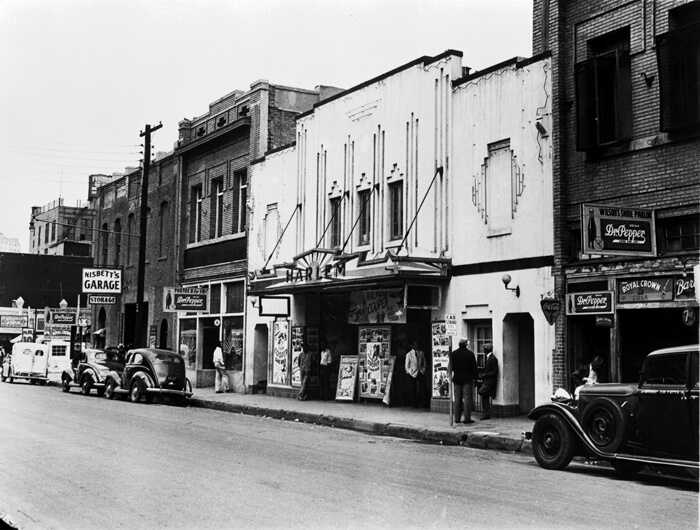 Top Ten Records board member Clarence Williams wrote and directed Hot Lips and Harmolodics — The Northern Texas Influence on Jazz Music that “explores the broad impact jazz musicians from the Dallas area had from the early part of the 20th century through modern times.” Yeah, you can add Dallas to the list of music cities for its incredible talent – it’s what we’ve been trying to tell you.

Top Ten’s Texas Music Archive Initiative wants people to know that too and remember it. That’s why this film is a must-see. Oran Thaddeus “Hot Lips” Page, whom the film is named after, is one of the North Texas jazz musicians the film highlights. A jazz trumpeter, vocalist and bandleader, Page was a member of Walter Page’s Blue Devils, Artie Shaw’s Orchestra and Count Basis’s Orchestra, but in his earlier years he toured with Ma Rainey, Bessie Smith and Ida Cox. The documentary also follows Fort Worth’s Ornette Coleman, Deep Ellum’s Blind Lemon Jefferson and Denton’s Stan Kenton.

Hot Lips and Harmolodics is part of the second phase of Top Ten’s initiative to archive Dallas’ musical influences. First, it built a library of Dallas music consisting of vinyl, cassettes and media that include inserts of research findings and information cards with historical context. These are available for loan for those curious to learn more, but the rare items are only available for in-store listening. The record store’s next phase is to receive a grant from Humanities Texas for more jazz exploration.

The Hot Lips and Harmolodics premiered last week at Texas Theatre and will be available on Top Ten Records’ VHX and YouTube.

This next one isn’t hitting the silver screen, but it is coming to a Dallas stage near you.

Hadestown, the Tony Award-winning musical based on the Orpheus and Eurydice tragic love myth, will be performed at the Winspear Opera House January 18-30. The musical “intertwines two mythic tales” – Orpheus and Eurydice with King Hades and his wife Persephone on a constant journey to the underworld in back. Hadestown won eight Tony Awards in 2019, including Best Musical, and a Grammy Award in 2020 for Best Musical Theater Album.

C’mon, we know you musical freaks will get a kick out of this one. Especially those of you who missed Hamilton at Fair Park Music Hall because of the parking and traffic. Good times.

This week, Skin Wade of the Ben & Skin Show on 97.1 The Eagle, announced via social media that the radio show will be going through a bit of a break. No worries, though, this is temporary. Wade will be going through some rehab post-surgery (he got some tumors removed from his neck, ahh.), so we won’t be hearing from the radio show or his Mavs broadcasts, Mavs Live and Mavs Insider for a while.

Here’s his full letter – in Helvetica.

We do wish our dearest friend a well and speedy recovery! We love Skin here at CT <3

Dang, what do we do while Skin is gone? Who will entertain us? Those are the real questions!!

Hmm, we kind of just went into this without even realizing this is the first White Noise of the year! Heck yeah, White Noise allllll 2022. Last week, we published a few end-of-the-year articles about the best things that came out of Dallas in 2021 – restaurants and bars, music and your favorite Central Track articles. If you haven’t checked those out, do so now and don’t miss out!

In 2021, we named Bobby Sessions’ song “Triple Deity” the #1 song in DFW for its iconic Dallas references and name-drops. Well, our #1 rapper got married literally the next freaking day! Too special not to mention, to be honest. Big congrats to the newlyweds, we’re definitely been blessed to him to grow as a musician through the years but even more excited to see him glowing in his personal life. Here’s the photo of the occasion (crying).

In case you missed this, too.

Since we’re on the topic, here are some more songs of the week we think you might like.