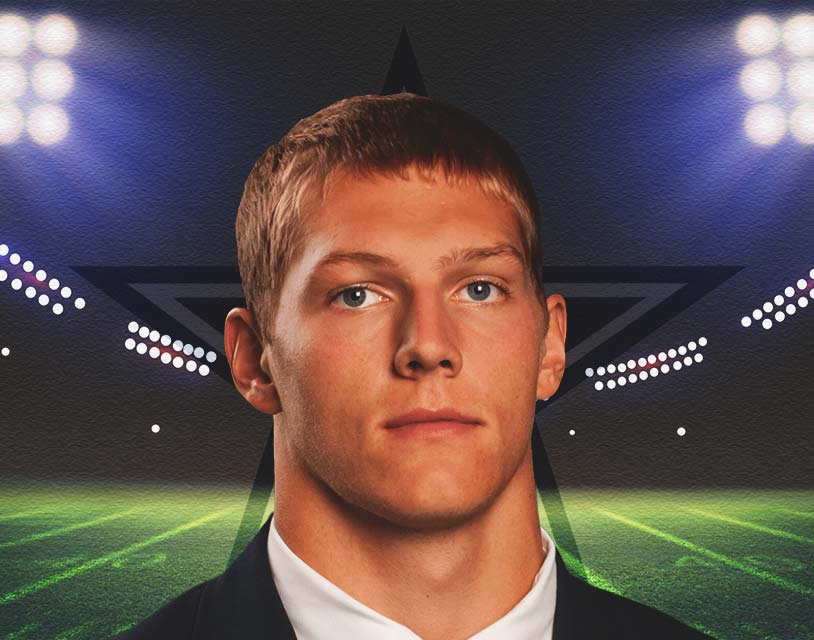 After Back-To-Back Road Wins And Some Badass Play From Leighton Vander Esch, The 2018 Dallas Cowboys Are Somehow Still In This Thing.

Win, lose or draw, it’s tough not to get emotionally reeled into a Dallas Cowboys game, huh?

I mean, if nothing else, you’ve got to admit that this team sure has a flair for the dramatic: Even after this roller coaster of a year, the Cowboys — with just six games left in the season — now find themselves with a viable path to winning the NFC East.

That’s pretty insane, considering where things sat just two weeks back. But here the Cowboys are after Sunday’s 22-19 win in Atlanta — their second win on the road in as many weeks, and the team’s first back-to-back wins all season long — with a better-than-zero chance that they could, a week from now, be sitting atop the standings in an NFC East that hasn’t had a repeat champion in more than a decade.

Anything seems possible at this point.

But this much isn’t up for debate: Every game this team plays down the home stretch will feel like it’s super important to this season’s outcome — just like this one, which kicked off a stretch of three games in 11 days and came down to the last ticks of the clock, very much felt.

Here’s are the thoughts still rattling around in our heads after yesterday’s W.

Dez Bryant departed in the off-season. Remember that? It was a big deal.

It was so big, in fact, that most Cowboys fans assumed that the team would select his replacement in the NFL Draft. But instead of snagging a young and speedy receiver like Calvin Ridley in the first round as Atlanta would, the team went with a widely unknown linebacker from Boise State by the name of Leighton Vander Esch.

Turns out they knew what they were doing.

Ten games into his rookie campaign, LVE has more than 100 tackles, eight of which he grabbed on Sunday during a game in which he played every single defensive snap but one. He also managed to pick off Falcons QB Matt Ryan — on a pass intended for Ridley, ironically enough. Vander Esch is just playing phenomenally. And it helps, too, that his field awareness, block-shedding abilities and general nose for the ball make him an exciting player to watch. His play this season is not only significantly calming down any rush to get Sean Lee’s hamstring healthy, but is forcing questions about how the team will mix Lee back into the rotation once he fully heals.

That’s what we call a good problem.

The Cowboys’ defense was tasked with stopping the Atlanta Falcons’ high-powered offense on Sunday. It was a match-up of strength on strength, though, considering the Cowboys’ D is ranked seventh overall and third in points allowed. And well beyond LVE’s stellar play, this team stepped up to the challenge.

DeMarcus Lawrence was in on two early Matt Ryan sacks and continued his campaign to get paid in the upcoming offseason. Better yet, his effort continued lifting his fellow linemates’ play as Randy Gregory, in his first season back  after sitting out a year and a half on suspension, was able to chase down Ryan for a solo sack of his own.

That effort held the Falcons in check for most of the game — so much so that, going into the fourth quarter, the score was just 12-9 Cowboys. In all, the D held Atlanta to one total touchdown on the day. It was another strong effort from the unit.

One worry, though: Has Chidobe Awuzie regressed? It looks like he is always there to make a big play, but… he just never gets the job done, does he? He just seems a little lost out there, which is holding him back from being the perfect complement to Byron Jones. Just something to keep an eye on.

It’s a fact: If Ezekiel Elliott is balling, then the Cowboys’ chances of winning skyrockets. Sunday in Atlanta was no different: Zeke clocked in and churned out 122 yards and a touchdown on the ground, and complemented that with 79 additional receiving yards. He was responsible for 201 of the Cowboys’ 323 total yards on the day, accounting for 62 percent of the team’s total offense. Dude is the offense. If Jason Garrett and Scott Linehan could remember that more often, maybe fans wouldn’t constantly be calling for their heads.

Though he crossed the 9,000-yard passing mark for his career on Sunday, it might be time that Cowboys fans conceded that Dak Prescott isn’t going to light opposing teams up for 300-plus yards every week — or even most weeks.

He’s good to give you about 215 passing yards on a good day, and he came up just short of that on Sunday with just 208 yards through the air. Better yet? He had no interceptions and, while he also had no passing touchdowns, he did get one rushing touchdown to help push the lead over the Falcons late in the game.

An efficient Prescott is how this team wins. If he plays mistake-free, no one will complain.

The Maher, The Merrier.

One of these days, Brett Maher is going to cost this Dallas Cowboys team a win. It almost happened on Sunday.

After making 16 straight field goals earlier in the year, Maher has missed field goals in three straight games and even missed an extra point early in the fourth quarter.

Fortunately, he made up for that error by being perfect on field goal attempts in this game — including the game-winner, which he barely squeak past the goalpost to clinch the W in the waning moments of the contest.

Things worked out this time around, but there’s a reason this guy is on his seventh team since 2013: He’s not exactly consistent. For the sake of Cowboys fans with bad hearts everywhere, let’s hope the team doesn’t keep placing their fate on Maher’s leg moving forward.

This week, the Cowboys look ahead to their second game in four days as they battle their division foe Washington Redskins on the annual Thanksgiving game in Arlington.

The ‘skins will be without quarterback Alex Smith, who suffered a gnarly broken leg in his own game on Sunday and will miss the remainder of the season. Oddly enough, his injury occurred on the exact 33-year anniversary of Redskins QB Joe Theismann’s own famous broken leg injury. Weirder still? That Theismann game ended with the same 23-21 score that this week’s Texans-Redskins game did. Creepy!

Texas Longhorn great Colt McCoy, who’s had success against the Cowboys in the past when asked to step up into the QB1 role, will take Smith’s place behind center.

After beating the last two NFC champs in back-to-back games, will the Cowboys be able to win their third straight against the division-leading Redskins? A win will tie Washington and Dallas atop the NFC East, with Dallas having a tie-breaker through head-to-head play.

Finally this week, I’d like to end this week’s column by sending thoughts and prayers to rookie Cowboys wide receiver Michael Gallup and his family.

Just after Sunday’s game, Gallup learned that his brother had died of an apparent suicide attempt. He did not travel back to Dallas with the rest of the team, instead staying with his family in Monroe, Georgia. He will be taking a leave of absence from the team while dealing with this tragic loss.

There is no clear timetable for his return.