When The Cowboys Feed Zeke, The Whole Team Eats. 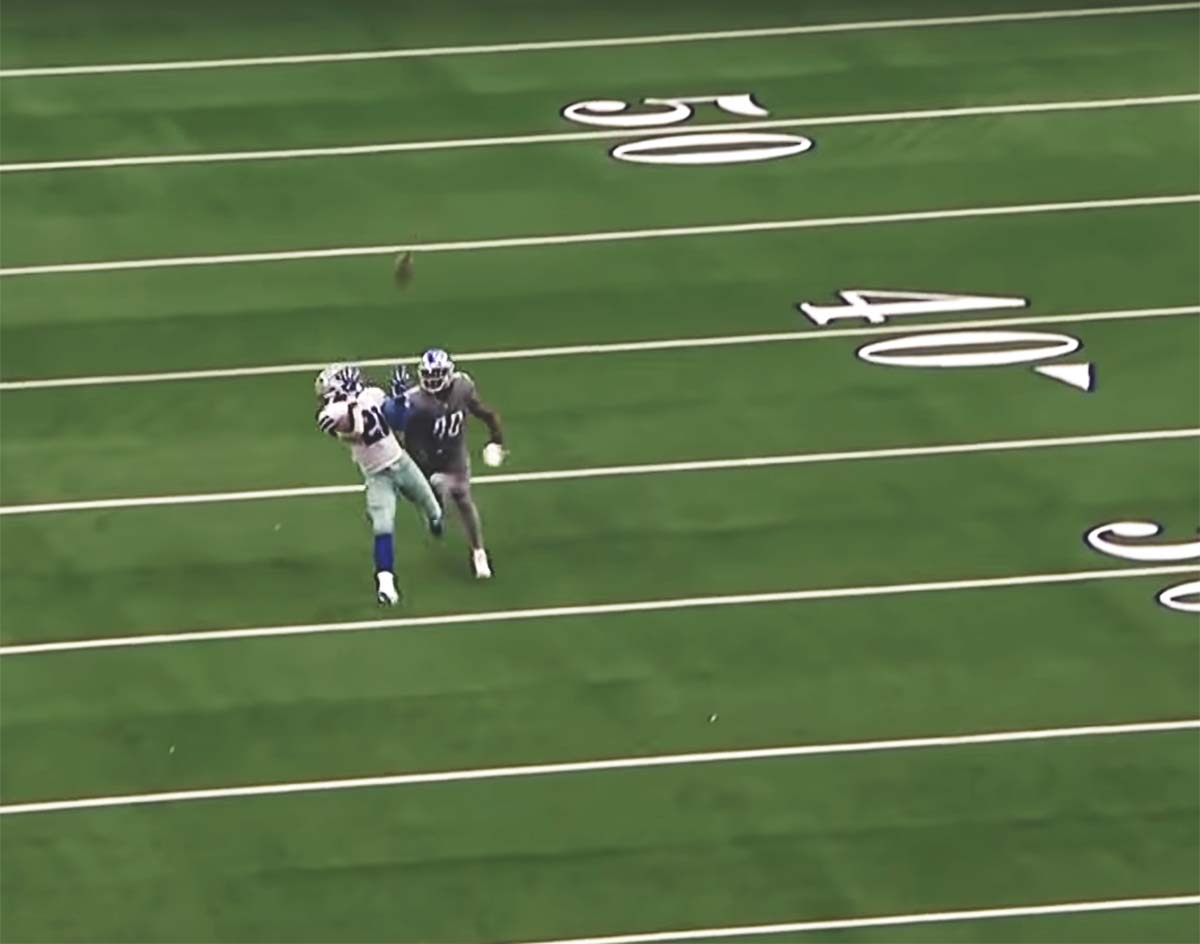 Against The Lions, The Cowboys Proved That This Team Is At Its Best When Ezekiel Elliott Is Featured. Plus: Four More Takeaways From Sunday’s 26-24 Win.

With the criticism and ridicule that followed last week’s loss to the Seattle Seahawks still stinging, the Dallas Cowboys hoped to turn their fates around while welcoming the  Detroit Lions to AT&T Stadium on Sunday afternoon.

And while there were plenty of the reasons for the Cowboys to kick this game off with a sense of urgency, none loomed larger than the threat of this team falling to 1-3 to start this 2018-2019 season.

Playing with a little pep in their step would work, too. Well, at the start of things, anyway: Running a hurry-up offense in the opening salvo of this game would place the Lion defense on its heels and open up scoring chances for the Dallas offnese.

Later, playing things a little more deliberately did wonders as far as keeping Highland Park native Matt Stafford’s time on the field to a minimum during his homecoming visit.

Still, it just wouldn’t have been a Cowboys game without some thrills and suspense. And this game managed to produce its share of those, for sure.

With the win eventually secured on a last-minute drive that featured a long-time-coming play call and the steely demeanor of a Cowboys newcomer, here’s what ultimately sticks out in our minds as we look back on this 26-24 win over the Lions.

Keep Feeding Zeke And The Whole Team Will Eat.

Our prayers were answered! Seems like, all of a sudden on Sunday, the Cowboys’s coaching staff remembered they have the best running back in the league on their team! Phenomenal from start to finish, Ezekiel Elliott registered a career-high 240 yards from scrimmage — 152 rushing yards on 25 carries, and 88 receiving yards on four catches — while bulldozing and running his way to his most productive game as a pro. As a bonus? Dude crossed the threshold of 3,000 career rushing yards — in only his 29th game, at that. He’s now tied with Clinton Portis as the second- fastest running back to 3,000 career rushing yards. Even better? He became the first player this season to have 200 yards from scrimmage in a single game. Here’s hoping it’s the start of many such games from the best player on the Cowboys’ roster.

An injury kept Sean Lee out of this game and at least two more, but no matter: Jaylon Smith, who has been progressing immensely this season, looked great while taking charge of the defense’s on-field play-calling duties; and, better yet, he paired very well with rookie linebacker Leighton Vander Esch. Together, these two combined for 13 tackles, while also helping keep the Lions under 100 yards rushing. Usually pedestrian without General Lee in the mix, this young linebacking corps finally looked up to the task of keeping the ball in front of them. That bodes well for this team’s future.

The Best Offense… Is A Good Defense?

The linebackers’ play was just one Cowboys bright spot on that side of the ball on Sunday. DeMarcus Lawrence is still on an absolute tear, registering a career-high three sacks in yesterday’s contest. All told, this defense has 14 sacks on the season now — good enough for the second-highest total in the league. Meanwhile, the word has gotten out on Byron Jones — the top-rated cornerback in league — and Stafford avoided throwing his way the entire game. A few months ago, the Cowboys weren’t sure they wanted to pick up Jones’ fifth-year option, then Kris Richard shows up, switches his position from safety to CB and the guy becomes a shutdown corner. The secondary play as a whole could stand to improve, though, as evidenced by catch machine Golden Tate totalling 132 yards receiving and a touchdown on the day. Kind of makes you wonder why Jones wasn’t mirroring Tate for the entire game, huh?

The Cowboys’ offense hasn’t exactly been on fire this year. Through three weeks, the team had the third-fewest yards in the league and the second-lowest point total. In this game, though, Dak Prescott finally took some downfield chances. It didn’t always work out: Tavon Austin beat pro-bowl corner Darius Slay Jr. on what would’ve been a 34-yard touchdown bomb if he didn’t drop the catch, and Cole Beasley, who played through an injured ankle, dropped a few chances tossed his way, too. But rookie Michael Gallup showed signs of becoming acclimated to NFL play by tallying two catches for 45 yards. And, best of all, Prescott threw for over 200 yards — his first time doing so since December 17, 2017. In all., Prescott was 17-for-27 on the day with 255 yards, two touchdowns and no turnovers. While it’s nice to see the offense stretching things out vertically, their next challenge will be to better improve their third-down conversion rate. Coming into Sunday, the Cowboys were converting on just 23 percent of their third down. In this game, they managed to convert 42 percent of their chances, going 5 for 12. In total, their rate on the season is just 28.26 percent, making them one of just four teams in the league with a worse than 29 percent rate. If this team wants to keep winning, it’ll have to up its game there.

The Maher You Know.

When Brett Maher replaced longtime fan favorite Dan Bailey as the Cowboys kicker right before the start of this season, fans cried foul. But four games into the season, Maher is looking like more than the money-saving option he was perceived as being. After yesterday’s pristine 4-for-4 field goal and 2-for-2 extra point effort, and most important of all, a 38-yard kick launched right down Main Street and through the uprights as time expired and the game was on the line, Maher’s looking money these days.

Next week, the Cowboys slide on down I-45 South to Houston to take on the Texans during Sunday Night Football. A win would go a long way toward getting this fanbase to believe this team can do better than what seems like an inevitable 8-8 finish. Only time will tell if that’s the case. But with David Irving’s suspension over and the defense already rolling without him, there’s reason to be optimistic that the so-called Hot Boyz might be good enough to give this year’s squad a chance.