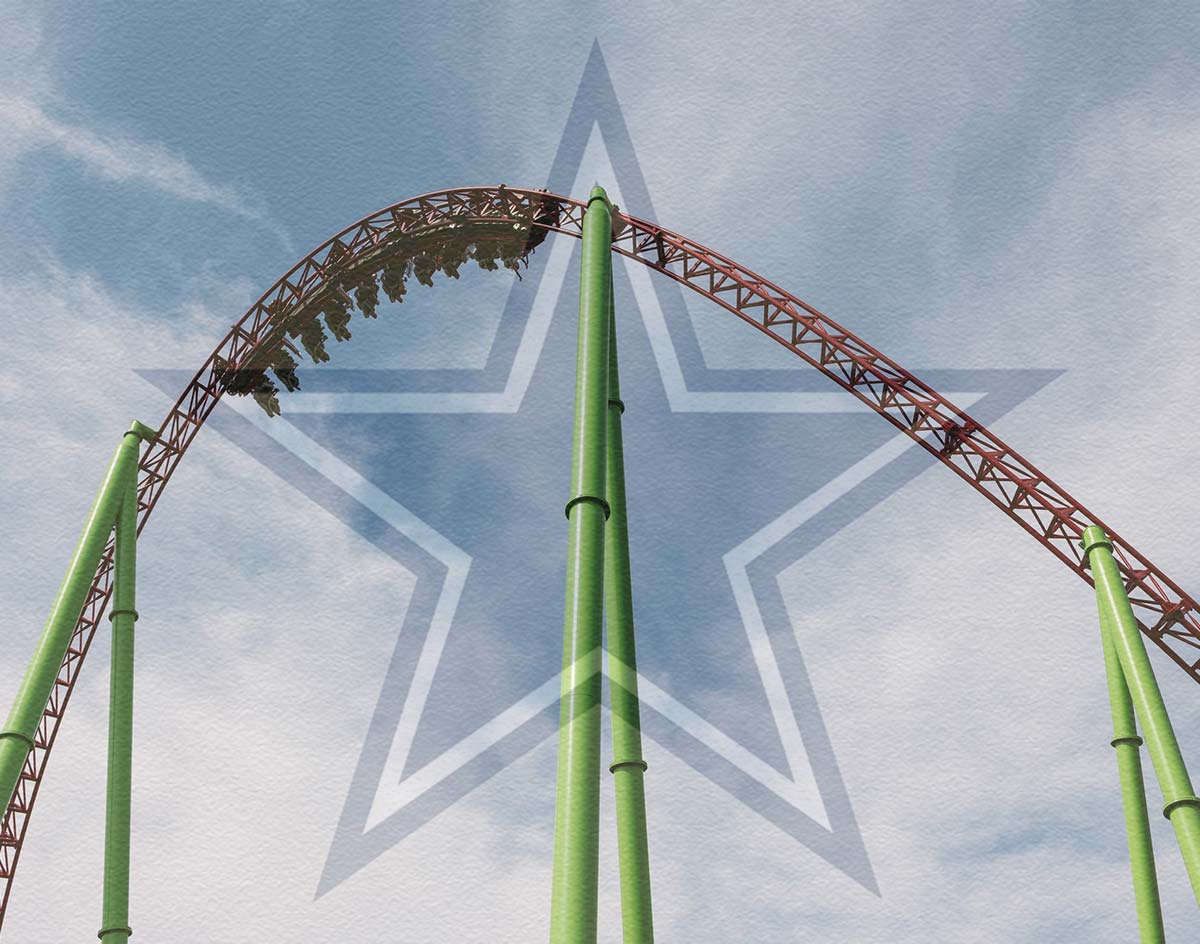 The 2018-2019 Season’s Wild Ride Continues With A Week 10 Away Win Over The Hated Philadelphia Eagles. Here’s What We Took Away From Sunday Night’s W.

Are you liking this roller coaster ride, Cowboys fans?

After last week’s match-up against the Tennessee Titans — a nose-dive of a game that everyone thought would be an easy win for Dallas but instead turned out to be a stomach-turning loss — the boys in silver and blue flew northeast this week to take on their division rival Philadelphia Eagles in a somehow still wide-open NFC East contest on Sunday Night Football. And wouldn’t you know it? They’d leave the night back on the up-and-up, a 27-20 win and a 4-5 record in their back pockets for the trip back to Dallas.

With the fan base starting to call for the coaching staff’s heads, head coach Jason Garrett and offensive coordinator Scott Linehan cooked up a winning game plan that, amid all that pressure, secured the Cowboys’ first road win of the season and halted the team’s losing skid at just two games.

A couple weeks from now, will we look back at last night’s W as a defining moment in this season’s turnaround, or will we just see it as too little too late? Only time will tell on those matters, we suppose.

In the meantime, as we do our best to enjoy this attraction, let’s take a look back at the things that broke right for the Cowboys up in Philly during Week 10.

For all the criticism and scrutiny he’s faced in recent weeks, Dallas Cowboys quarterback Dak Prescott deserves props for showing up and showing out on Sunday night. He played effectively and committed no turnovers, and although he was sacked four times, you can’t blame him for that considering that the already hobbled offensive line was missing starting guard Connor Williams and saw Zack Martin limp off the field with a first-quarter knee injury.

In spite of that, Prescott and his receivers flashed some real chemistry just as a low-scoring half came to an end. From there, things clicked all over: Rookie wide receiver Michael Gallup showed flashes, Cole Beasley got involved and Amari Cooper looked increasingly comfortable in his new role in Dallas. Just two weeks after Dallas shipped next year’s first round draft pick up to Oakland in exchange for him, Cooper pulled in six passes for 75 yards in this one, which is definitely a step in the right direction. Sure, it would’ve been a leap in the right direction if Prescott didn’t at one point overthrow an open Cooper on a long ball that would’ve resulted in a touchdown — but, either way, the benefits of having someone that opposing teams have to actually plan for are extremely visible two weeks into this experiment.

In all, Prescott was able to link up with seven different receivers on plays of at least 13 yards in this one. Better yet, along with tossing a touchdown to Ezekiel Elliott (more on him in a minute), Prescott’s 270 passing yards against Philadelphia’s banged-up defensive secondary counts as his highest total on the season so far.

If only he looked this good every week!

Zeke Left This Game With A Full Stomach.

In his second week as offensive line coach, Marc Colombo’s unit battled through injuries and left Prescott out to hang more than a few times. But, for the most part, they opened up big opportunities in the ground game, as Zeke feasted in this one.

He just had a stellar night on Sunday, running for 151 yards and a touchdown on 19 carries while also pulling in six catches for another 36 yards and touchdown. His fifth career game with more than 150 yards rushing was also just the second time an opposing RB has rushed for more than 100 yards against the Eagles defense this season.

Oh, and he even busted out some hurdle action!

Simply put, when Zeke is churning like that, it’s good news for this offense. As we’ve said before: When the Cowboys feed Zeke, the whole team eats.

Welcome To The Vander Esch Era.

Vander Esch, who was the Cowboy’s first round pick in the 2018 NFL Draft, has been impressive throughout his first NFL season. And following the recent injury to Sean Lee, who will be sidelined for another four to six weeks at least after hurting his hamstring in Week 9, he’s only further stepped up to the plate.

Along with his corps-mate Jaylon Smith, he’s helped in a new era in the Cowboys linebacker history.

It helps, of course, that the units in front of and behind this LB unit are playing well, too. On the D-line, Randy Gregory continued to show off progress in this one, collecting a sack along with Terrance Crawford, who grabbed one of his own. The secondary showed more room for improvement, meanwhile, although Chidobe Awuzie and Byron Jones each had key deflections throughout the match and held Cowboys nemesis Golden Tate to only two catches for 19 yards. Last time the Cowboys faced Tate — back in Week 4, when he was still on the Detroit Lions — he hauled in eight catches for 132 yards and 2 touchdowns. So, yeah, this effort was better.

But while the defense performing well isn’t a huge surprise — that side of the ball has seen Cowboys’ most consistent play all year, keeping opponents to just 19 points per game, which is good enough to make them the third-stingiest D in all of football — it’s incredibly encouraging to see it perform well without Lee around to help the cause. The young guns filling in for him at LB see to deserve a lot of credit for that.

The consistency, or lack thereof, is what frustrates fans the most. And, make no mistake, that’s what we’re going to be watching moving forward.

We’re also going to be keeping a close watch on Garrett and Linehan’s seats, which are obviously less hot after a win like this one, but could get scorching again if the team shits the bed next week against the Falcons.

On the other hand, a win against Atlanta would throw the Cowboys right into the playoff conversation and put them in an even better position in the NFC East. Are we keeping out hopes up for that, though? Of course not! The Cowboys haven’t strung together two straight wins all season long. Do we really think they’re going to start now?

That’s the scariest thing about this Dallas Cowboys roller coaster: You can’t see its dips and rises before they come.