The Return Of The Dak (Oh My God). 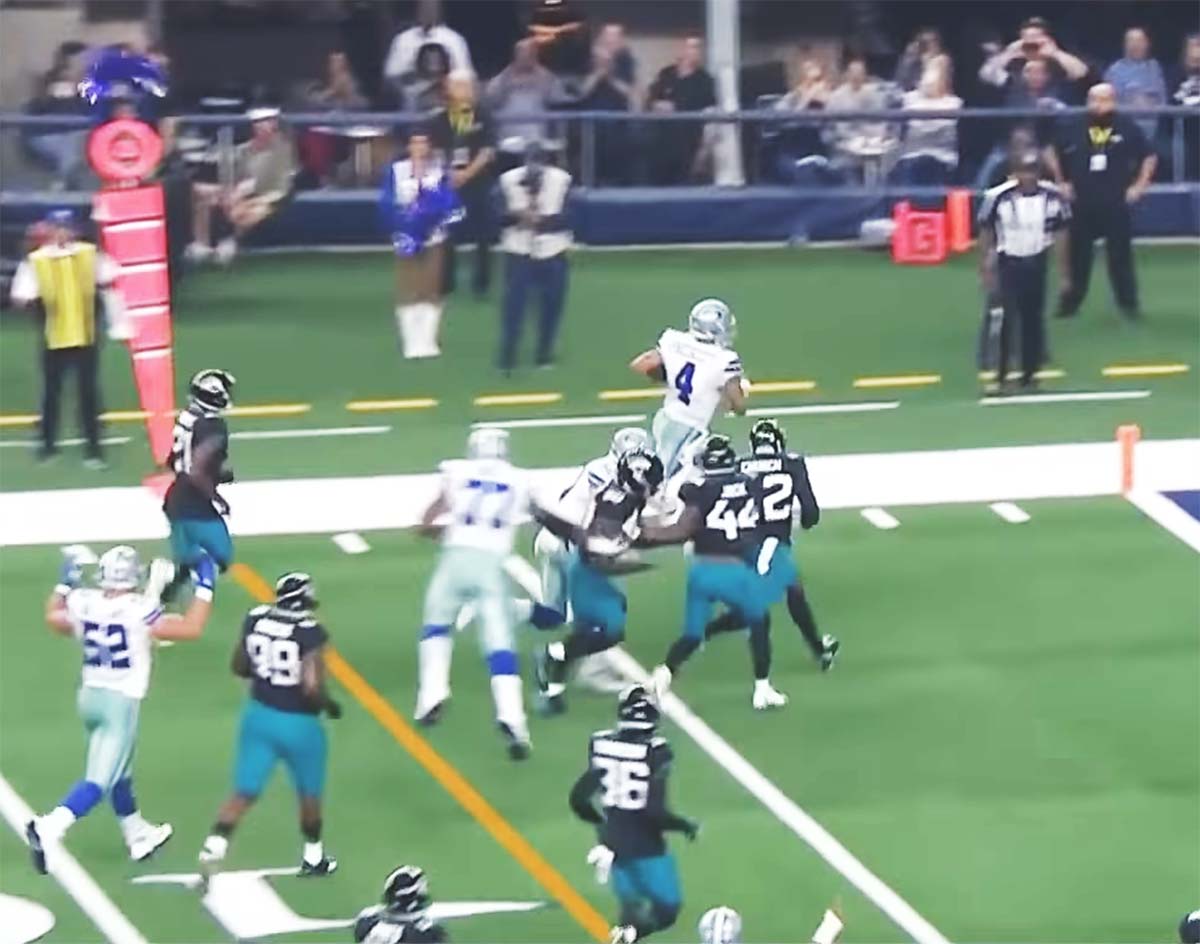 Mobile Dak Is The Best Dak, Plus Four More Takeaways From The Dallas Cowboys’ 40-7 Dismantling Of The Jacksonville Jaguars In Week Six.

Just one day after Jerry Jones’ 76th birthday, the Dallas Cowboys welcomed to town what was said to be the NFL’s number one defense.

And Jacksonville, weirdly, gave Jones quite the present: Its vaunted defense decided to no-show, and the home team slaughtered them to the tune of a 40-7 drubbing.

Following last week’s poorly managed overtime loss to the in-state rival Houston Texans, we had a feeling that the Cowboys were possibly due for something of a rebound this week — if only because giving fans false hope is kind of what we’ve come to expect from the Jason Garrett era.

But we didn’t expect a 33-point win for the Cowboys. C’mon. Who did?

Well, perhaps Connor McGregor. Beyond hitting One Sette and Citizen with Ezekiel Elliott and his public pleading for Jerry Jones to revive his career, the recently embarrassed MMA fighter was a surprising on-field presence at AT&T Stadium on Sunday. And who knows? Maybe his appearance really is to credit some for the Cowboys’s improved play.

Because the team really did look pretty good as it improved to a record of 3-3 on the season.

And we can confirm that the team looked damn good in person, too! Thanks to our friend Valencia King of KKVI‘s “Real Talk Sports with Valencia King” — follow her on Twitter and Instagram! — we caught the onslaught in person and got some exclusive post-game interviews with a few of the players.

Catch those player quotes sprinkled in below as I run through the things stood out to me from Sunday’s win.

He still didn’t pass the 200-yard mark, but Rayne Dakota Prescott played efficiently and aggressively on Sunday. No, his numbers won’t exactly jump off the stat sheet at anyone, but Sunday’s Dak looked confident and, for the most part, in control. Sounds crazy, I know. But he didn’t throw any picks, and the two times he fumbled, the ball rather miraculously bounced back his way.

It’s likely that offensive coordinator Scott Linehan’s designed run calls for Prescott — the QB ran 11 times for 82 yards on the day — helped Dak settle into the game and feel good about the prospects of attacking the D.

In his post-game presser, Dak agreed that a big part of his success on the day had to do with his being able to keep his emotions in check, especially during those times when he literally dropped the ball. Said No. 4, who was also sure to credit luck as a something of a factor: “I knew it was important to stay calm in those moments, and [not] get to diving [on top of the ball]. I was able to get some fortunate bounces.”

Prescott also credited Cole Beasley’s nine-catch, 101-yard, two-touchdown performance for making the offense click: “Cole was excited all week to face this defense, and vowed to have a big week.”

Wanna hear a crazy stat? On Sunday, Beasley became the first receiver on the Cowboys roster this season to have a 100-yard receiving day.

Offensive success like this is obviously welcome, but seeing the Cowboys consistently win when Linehan calls games like this makes you wonder why he ever strays from the script. Just as curious? How come this year’s offense has played so well at home and looked so poor on the road.

The lesson here? If you play to the skill of your quarterback, you get the results you want. So, uh, how about doing that a little more? What do you say, Linehan?

The Maher, The Merrier.

Dan Bailey? Never heard of him.

With each passing successful week from Brett Maher, Bailey’s release is looking more and more like one of the better calls the Cowboys front office has made in a while. After his Week 1 miss, Maher has now successfully completed 15 straight field goals. On Sunday along, he banged in four field goals, including one from 55 yards out.

Not only is the guy now leading the NFC in field goals made, but he’s also now second in NFC scoring behind only Los Angeles Rams running back Todd Gurley.

Zeke Is Fast On The Field — And In The Record Books.

Ezekiel Elliott now has 586 rushing yards through six weeks this season — a figure that trails only Gurley’s 623 in the whole league.

On Sunday, he carried the ball 24 times for 106 yards. The touchdown he also ran for at the beginning of the fourth quarter was also the 25th rushing TD of his career. He reached that milestone in just 31 games, which is the fastest that any player in Cowboys history has taken to reach that mark.

Putting It All On The (Defensive) Line.

David Irving and Maliek Collins returning to this D-line rotation is only going to help this already strong unit. In fact, Irving didn’t take long at all to make his presence felt, making a spectacular tackle for loss early on and just being his usual very disruptive self all throughout the game after that.

Hell, even Randy Gregory showed flashes of brilliance on Sunday, tallying a sack and two tackles for loss.

This Cowboys defense is keeping opponents to just 17 points per game this year, which is good enough to make them the second-toughest team to score on in the NFL. The stout defensive line, with its impressive penetration of the pocket all year long, deserves a lot of the credit for that.

After the game, Irving seemed pleased to be back in action and contributing to the caused. He was all smiles in the locker room after the win.

Turning Over A New Leaf?

For all of its success, it sure took a while for this defense to produce any takeaways this season. It wasn’t until just last week against the Texans, after all, that this team got its first interception on the year.

But this week, the trend that kicked off last week continued, as Jeff Heath almost had a pick six off a Byron Jones deflection and Jourdan Lewis scooped up a fumble recovery.

“It feels amazing, and it was a blessing to go out and contribute the way I did,” Lewis said at his locker after the game. “It just feels good to help the team win.”

Next week, the Cowboys travel to Washington D.C. to take on the division rival Redskins before being blessed with a much-needed by the following week.

What will we be watching for next week? A few things.

Will this offense finally perform well on the road for once this year? Can the Cowboys really get above .500 before their week off? Would doing so save some of their coaches’ jobs? Is that a good thing?

We look forward to finding out.