White Noise: Globe Life Field Hosted One Of The Biggest Rock Shows Since The Pandemic Began. 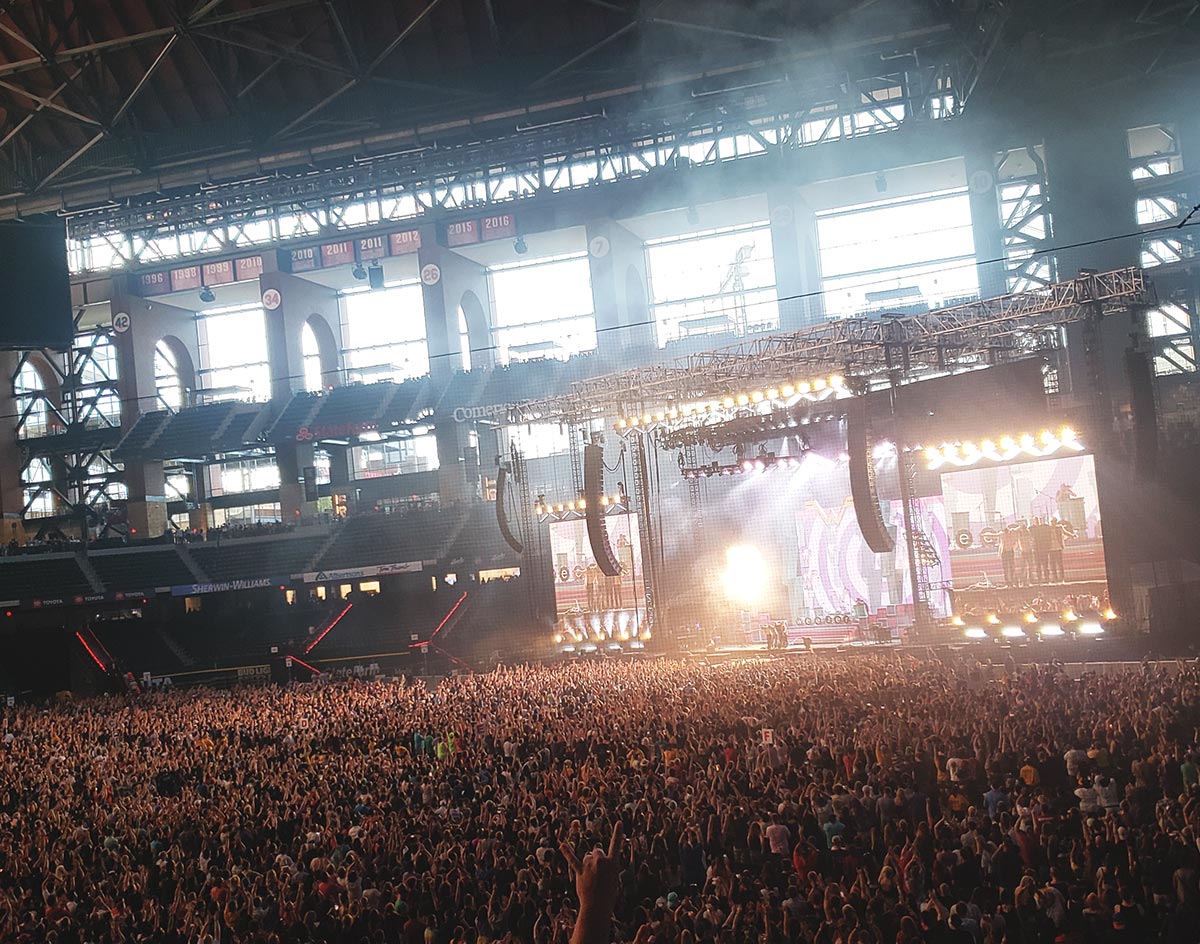 Almost exactly a year after it was initially set to go down (down in an earlier round), the “Hella Mega Tour” featuring Green Day, Fall Out Boy, Weezer and The Interrupters finally made its way to Arlington’s Globe Life Field on Saturday night.

And, with some 40,000 people in attendance at the new climate-controlled home of the Texas Rangers, the rescheduled tour kickoff show was a massive affair — the biggest non-festival show since the beginning of the pandemic, per an on-stage aside from Weezer frontman Rivers Cuomo that was then confirmed by representatives with concert promoter Live Nation.

Alas, it’s looking increasingly possible that returns to normalcy like that one — glorious and celebratory as they may be — might not be long for this world. Just today, the US Centers for Disease Control and Prevention updated its mask guidelines to recommend that even fully vaccinated people wear masks indoors in areas with “substantial” and “high” transmission of COVID-19 — a description that includes Dallas County, which currently boasts an orange threat level, meaning locals are to proceed with “extreme caution” when it comes to the still-ongoing pandemic.

As Rolling Stone notes, masks weren’t exactly prevalent at Globe Life this weekend, with only about one in every 300 attendees being seen rocking a mask.

If we’re not careful — seriously, folks, please just get vaccinated — events around these parts could start getting canceled again. Or they could go the way of the Tokyo Olympics, which are still taking place, but not without any crowds in the building.

Also not in Tokyo is the ever-audacious Dallas sprinter Sha’Carri Richardson ,who was kicked off the U.S. track and field team after testing positing for THC during Olympic trials. She’s still getting her shine, though! The track star recently landed a Beats by Dre commercial that premiered during Game 6 of the NBA Finals, in which she is seen warming up to race while a never-before-heard Kanye West track “No Child Left Behind” from his (purportedly) upcoming album Donda plays.

That album, which is named for West’s late mother, has been subject to some release delays. Now, after having hosted an early listening party for the LP at the stadium last week, West is reportedly living in Atlanta’s Mercedes-Benz Stadium as he puts the finishing touches on it. The most recent word is that the collection should drop on August 6. When Donda does drop, it looks like it’ll feature some local greatness, too: West’s North Texas-based cousin The World Famous Tony Williams sings the hook on “South Carolina,” the song most recently tapped to open that release.

Also coming up is a Red Bull-sponsored international Spanish-speaking freestyle rap competition called Red Bull Batalla that will feature the talents of three seasoned Dallas-area emcees — 21-year-old Zazo Wan (originally from Argentina), MC Betho (who has competed in the contest since 2017) and Lewisville rapper Faby. The U.S. qualifier rap battles will take place August 12, and will pit 36 competitors face to face as they duke it out bar for bar. Winners from that competition will then move forward to the U.S. finals on September 18 and, from there, the top entrants will move on the the world finals on December 11 and 12. Sounds epic, right? In fact, last year over 1.5 million people watched the Final battle.

Best of luck to those local competitors!

If you’re feeling lucky yourself, then maybe an hour drive north to the Choctaw Casino & Resort‘s newly constructed 19-story Sky Tower is worth a thought. The new addition adds tons of new hotel rooms, thousands of slot machines, a poker room, 40 extra gaming tables, a couple restaurants, a movie theatre and a three-acre pool to what the facility already had to offer. The Sky Tower officially opens August 6, but the folks up in Durant, OK, are celebrating all month long with a concert series that includes Longview country music star Miranda Lambert performing back-to-back dates on Thursday, August 12, and Friday, August 13. She’s already sold out two out of three upcoming New Braunfels dates as well, and with no Dallas shows penciled in at present, a casino show up in Choctaw Nation may be a best-case scenario for catching one of country music’s leading ladies in the act for the time being.

As for what to expect? Well, Lambert herself recently released a not-so-country remix from Telemitry to her song “Tequila Does,” which was originally featured on her 2019 album, Wildcard.

Of course, if you wanna try to see him live and in person, you’ll have a few festival settings for doing so (presuming they’re not canceled), including MerleFest, Under the Big Sky, Hinterland Music Festival and Stagecoach 2022. His latest single release “I Need Your Love” also hit No. 24 on the Americana charts after just two weeks. That song will be featured on Crockett’s upcoming ninth studio album Music City USA.

Speaking of Austin City Limits, Crockett will also be playing the festival version of that brand in October alongside some locals including Erykah Badu, Marc Rebillet, Allison Ponthier and, as of last week, rising country performer Vincent Neil Emerson. As discussed last week, Emerson himself is on the rise: His last album was produced by Rodney Crowell, who himself just released an album called Triage for which he’s been using his own press cycle to rave about his young collaborator.

“There’s no pretentiousness in that boy,” Crowell told Nashville.com about Emerson. “He’s a great guy, a great writer, a great guitarist. I have a feeling he’ll be around for a while now.”

As for seeing Emerson live, he also recently announced he’ll be making a trip up to Nashville to perform at AmericanaFest along with other buzzing locals The 40 Acre Mule and Joshua Ray Walker.

As for the local punk rockers in Noogy, they may not have any festival stops scheduled yet for this year, but they did just pick up a pretty gnarly stage slot opening for Fat Wreck Chords legendary skate punk band Lagwaggon when they come to town December 1 at Gas Monkey Bar & Grill with Oklahoma rockers Red City Radio. Lagwagon as a band never lets the fans dictate their setlist, preferring instead to play what they feel — and for the upcoming show they will be performing songs from their albums Blaze and Double Pladinum.

While on the subject of big shows, rising local death metal favorites Frozen Soul just performed as part of the sold-out Wrecking Ball Madness concert over the weekend, and it seems things got a little heated at the show — literally. Apparently there was a back-and-forth between Haltom Theater management and the band involving a blown A/C transformer, the fire marshal and some 1,000 sweaty people attendees burning up in the heat. For its part, Frozen Soul has issued an apology — and a promise to never book a show at Haltom Theater.

On a much darker and far more disappointing note, an alleged victim named Savvi has come forward via a podcast called enough. to say that the Dallas-adopted punk band Teenage Bottlerocket’s singer Ray Carlisle sexually assaulted her on multiple occasions. For its part, Teenage Bottlerocket issued an official statement regarding the alleged incidents — and, while it expresses some remorse for certain behaviors of Carlisle’s and denies others, it has to be said too that it doesn’t address every allegation.

On a much more pleasant podcast note, the aforementioned Leon Bridges was featured on a podcast in which the discussion surrounding the niceties of his music. He joined Dax Shepard on Armchair Expert to talk about life in general as well as harnessing his award-winning sound — and told Shepard that he doesn’t like using his fame as leverage to meet girls, as he’s actually pretty shy.

So why appear on a podcast, then? Well, to promote his new album Gold-Diggers Sound, which was released just last week and has already seen some stellar reviews: The Guardian heralded it as boasting “unashamedly grown-up songs for the soul,” Pitchfork called it “smooth, risk-averse R&B whose nostalgic trappings aim for timelessness” and The New York Times lauded Bridges for bringing “southern soul into the 21st century.”

Also just released was the latest posthumous single from late Dallas rapper Mo3, who was tragically shot and killed last November. Since that time police, have arrested two suspected corroborating killers that are currently awaiting trial in federal custody and Mo3’s camp has continued to release music the performer recorded before his death. The latest is called “Get Back,” and it kind of features the performer at his best.

As for some of Mo3’s collaborators, Oak Cliff rapper OG Bobby Billions also just dropped a new video “Food Stamp Baby” that features Uno Loso and (rather interestingly) Trapboy Freddy  talking about their hardships growing up in poverty and offers some positive motivation to get through it.

In case you missed our in-depth coverage last week of rapper Bobby Sessions latest-released “Triple Deity” music video that’s chock full of D-Town shout outs, here it is again for your viewing pleasure. Actually, it could make for a decent pregame to a night out, if you ask me. Take a drink for each Dallas reference, and you’ll probably end up with a hell of a buzz!

Meanwhile, local indie rockers Velvet Dos are riding the buzz of their latest “Lonesome” single finding its way onto the soundtrack for the new movie, Last Letter From Your Lover. That film is directed by Dallas-based  filmmaker Augustine Frizell and is currently streaming on Netflix. Velvet Dos is the latest project featuring Taylor Rea (of Zhora) and Silas Nello.

Finally this week, if you find yourself depressed and having suicidal thoughts, please talk to somebody about it as soon as you can. There are people who care, as well as qualified professionals that are willing to lend a hand when times get hard.

On that note, State Fair Records’ Chris J. Norwood released the single “Good Guy With A Gun” off his upcoming album I Am Not Cool, and it’s heavily themed. Written about Norwood’s father who committed suicide when Norwood the songwriter was still just a young child, the performer has the following to say about the track: “As a country, we need to talk more openly about suicide. Especially as it relates to the gun debate and gun culture. I feel like suicide is often overlooked in the debate about guns here in America. We’ve been given fruitless answers about how to stop a bad guy with a gun, but little in the way of how to stop a good guy with a gun… I don’t have any solutions to offer, but my hope is to encourage dialogue, and my hope is also that anyone who needs help will feel the courage to seek it out. Please call the National Suicide Prevention Lifeline 1-800-273-8255.”

Couldn’t have said it better ourselves. Check out the song below.

Cover photo of Weezer’s Globe Life Field performance by Pete Freedman. Got a tip for White Noise? Email us!