The Audacity Of Sha’Carri Richardson. 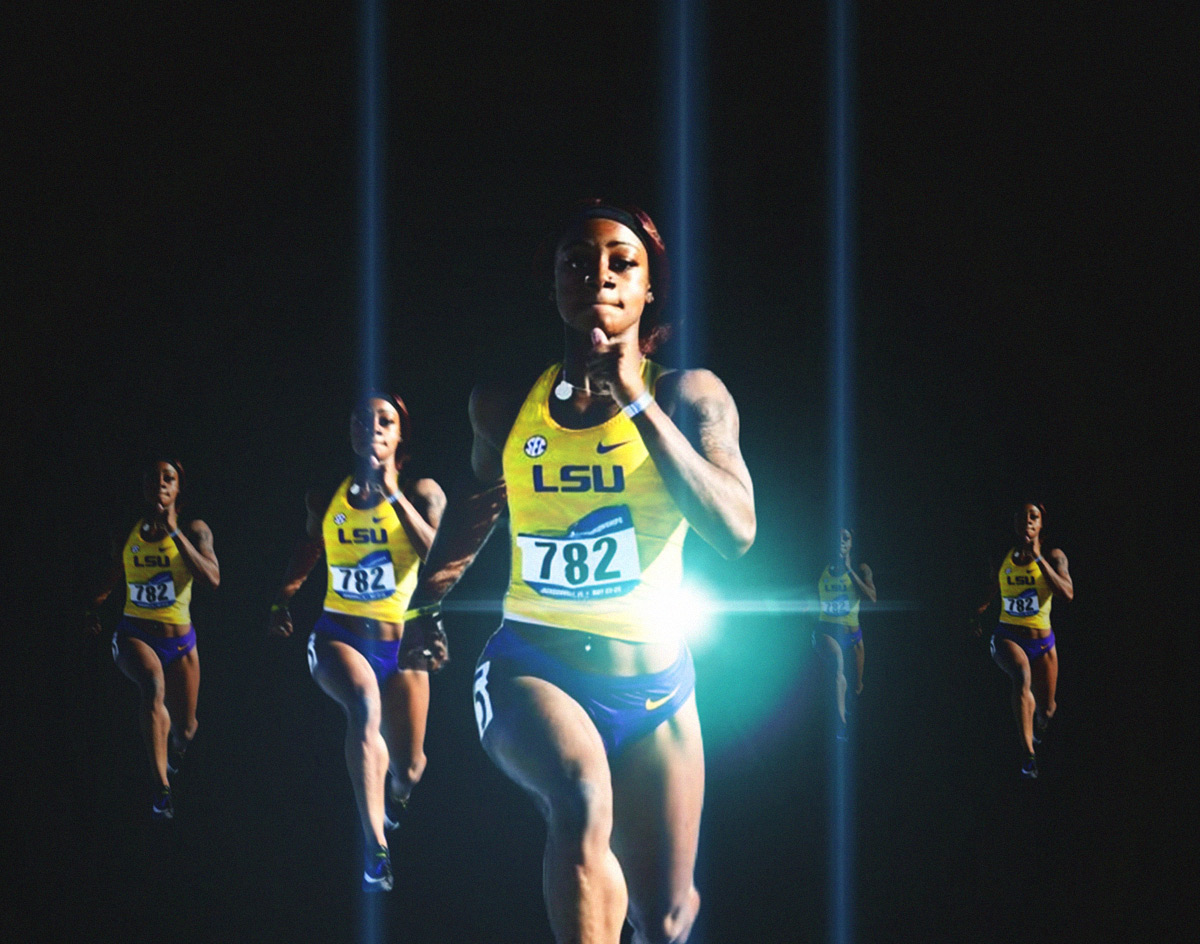 Heading Into The Tokyo Olympics, The 21-Year-Old Is Speeding Toward Superstardom — And With A Decidedly Dallas Brand Of Swagger, Too. You Really Do Love To See It.

Update on July 2, 2021: Richardson has been suspended from competing in the 100-meter dash at the 2021 Tokyo Olympics after testing positive for marijuana use. We think that’s a trash decision.

Right now, the newest member of the U.S. Olympic Team is the fastest woman in the country.

And she’ll be the first one to remind you all of this.

To call Sha’Carri brash would be a woefully inept way to describe her entire energy. Describing someone as being brash also carries a certain negative connotation — so, no, brash isn’t the word.

Audacious is a more apt descriptor.

In the world of track and field, the 100-meter dash remains the preeminent event. Running the 100 meters is reserved for only the fastest, most explosive athletes — and, in the Olympics, 100-meter dash participants tend to be marquee athletes tasked with carrying their respective country’s flag while leading their fellow countrymen and countrywomen through the opening and closing ceremonies.

The 1996 Olympics catapulted Gail Devers into that marquee-level superstar athlete stratosphere when she won Olympic Gold in the 100 meters. Now, 25 years later, an audacious 21-year-old, true-blue Dallasite is gunning to emulate Devers’ success.

During the Olympic trials last weekend in Eugene, Oregon, the South Dallas-born and Oak Cliff-raised Richardson blazed her way to a 10.86 obliteration of the field. To put this performance into context, Sha’Carri only missed Olympic legend Florence Griffith Joyner’s world record by 0.24 seconds.

Perhaps the most audacious moment of the weekend, though, came during the semifinal race, where Sha’Carri was so far ahead of her competition that she had the time to point at the clock while still being some 25 meters out in front of the pack. (Oh, and she still finished with a 10.64 time — albeit wind-aided).

Let us introduce you to the newest member of the U.S. Olympic Team: Sha’Carri Richardson.@usatf | #TrackFieldTrials21 x #TokyoOlympics pic.twitter.com/O2wvaRgI8X

Richardson has been this way since her time at Dallas’ Carter High School, where she was a nine-time UIL state champion in the 100 meters and the 200 meters. Truth be told, Sha’Carri has wanted — yearned — to be an Olympian since she was in grade school. As a college athlete at Louisiana State University, she set several NCAA records, but her yearning to be an Olympian became especially evident as she turned professional after just one season at LSU.

“I just want the world to know that I’m THAT girl.” 💥@itskerrii with this ENERGY.#TrackFieldTrials21 | #TokyoOlympics

But that’s not to say she’s had a clear path to this point. In the midst of preparing for this year’s Olympic trials — already delayed a year due to the ongoing global coronavirus pandemic — Richardson had to deal with personal tragedy. During an interview with NBC, she revealed that her biological mother had passed away the week prior. She declined to go into further detail on the matter, calling it “still a very, very, very sensitive and confusing topic for me to even speak on.”

Watching Richardson share what is undoubtedly such a deep, personal tragedy, you can’t help but root for her even more. Then you realize she’s still only 21 years old. To be so young and still be able to go for and achieve a life-long goal while grappling with personal tragedy is just unflinchingly brave.

Justin Gatlin, a five-time Olympic medal winner and one of Richardson’s trainers, refers to his pupil as an M&M — because, as he says, “she’s very hard on the outside but a real soft teddy bear on the inside.” But for all the hate Richardson receives about her outward appearance and outspokenness — and there’s a shameful amount of that chatter — Richardson approaches it all healthily, doing what she can to turn it into added inspiration.

“I have to transform[the hate] into motivation cause very easily I could show them the Dallas in me” 😂😈
– @itskerrii pic.twitter.com/31gtrgmWxh

She’s heard and read all manner of hateful vitriol throughout her young career. It’s the same brand of hate that her idol Flo Jo dealt with, only magnified through the filter of social media.

Still, Richardson remains undaunted. Amid all the hoopla, she’ll take the opportunity to remind you how to properly pronounce her name.

Perhaps the clearest way Richardson expresses her audacity is through her rotating hair color choices, her most prominent calling card. At the Olympic trials in Oregon, she blazed past her competition while rocking bright orange hair — a color that was suggested by her girlfriend. Watching this 5’1″ phenom come from behind to obliterate the completion while her incendiary locks struggled to keep up was like watching a literal fireball race down the track.

“She suggested [this color] because its loud and vibrant like I am,” Richardson exclaimed of that choice with a big, bold smile.

Mood. 🔥 @itskerrii dominates her heat of the women’s 100m first round in 10.84!#TrackFieldTrials21

A pure distillation of Dallas swagger, Richardson is self-assured, and always ready to put on for her family and city.

Right now, she’s on track for a thrilling showdown against Jamaica’s 33-year-old, two-time Olympic 100-meter champion Shelly-Ann Fraser-Pryce for the title of “World’s Fastest Woman” this summer in Tokyo — and maybe some world records while she’s at it.

Right now, her competitors should be worried.