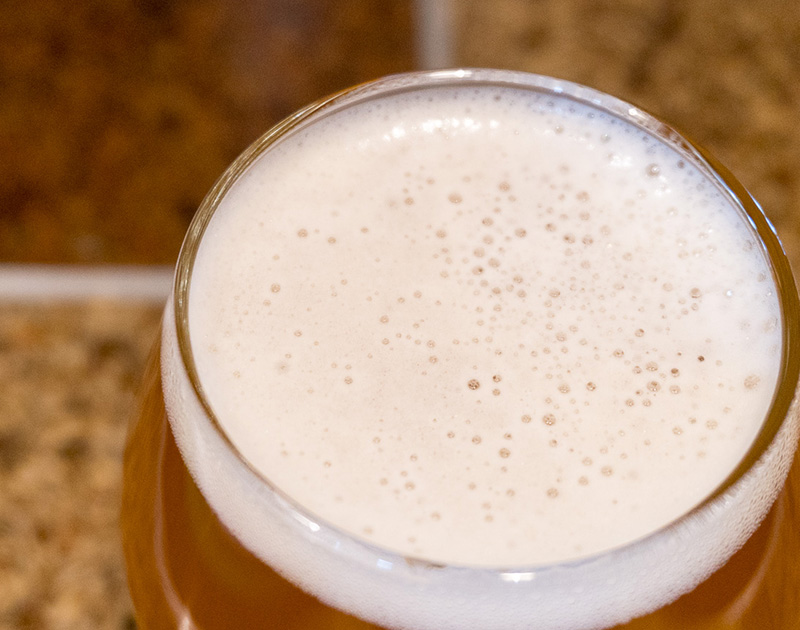 Braindead Brewings’s P-Wing Has A Strong Citrus-y Nature And Smooth, Hoppy Taste That Makes It The Deep Ellum Brewery’s Best IPA To Date.

This week, we sipped on Braindead Brewing’s P-Wing. 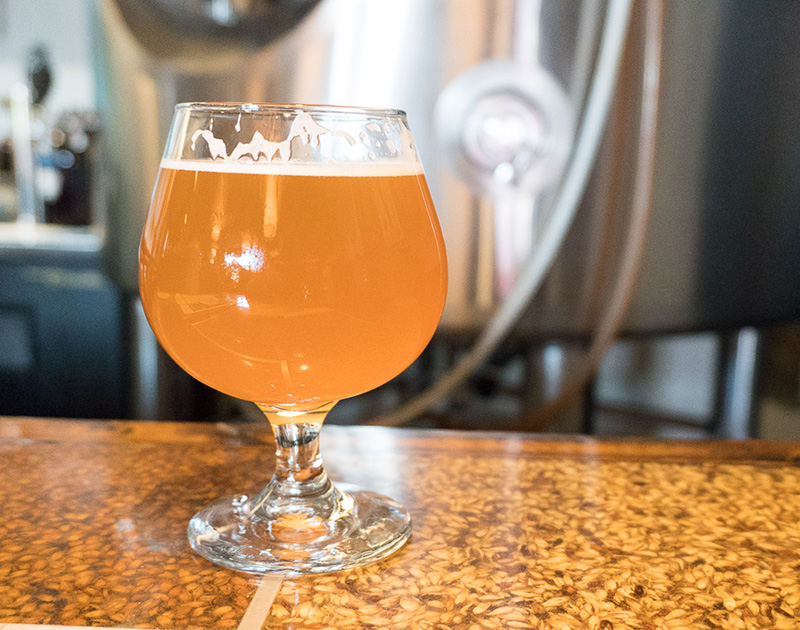 Overview.
Braindead Brewing, Deep Ellum’s weird, uber-friendly neighborhood operation, continues to surprise and delight with waves of new offerings. I think one of the things I like best about Braindead is that it keeps things small and weird. And by weird, I mean that because of its small nature, Braindead has the flexibility to take risks that other larger operations may not. There is, without a doubt, some risk to take when brewing a new beer. However, Braindead’s small-ish size allows it some room for experimentation. So while Braindead does brew a cadre of successful, crowd-pleasing beers, it’s that niche smaller brewpub vibe that excites me. Since I last visited BDBC, it has finished out its expansion into the small space next door. I asked for a quick peek, and boy, it was already a crowded situation. (Thanks, Spencer!) So while Braindead isn’t cranking out 90BBL batches of beer, it is executing smaller 15-30BBL batches, which are at least on par with most of Dallas’ other smaller brewpub operations.

As a side note, Braindead is putting on its third annual barrel and sour beer party real soon. Do you have your ticket yet for this year’s Festicle?

Background on American IPA.
For a primer on the American IPA style, check out our review on Texas Ale Project 50FT Jackrabbit. The American IPA is a subset of the larger IPA style which focuses on American and/or New World hop varieties. According to Beer Judge Certification Program notes, the first American IPA on record was Anchor Liberty Ale, a beer brewed using only Cascade hops. If there’s any hop variety that’s uniquely American, or at least the most widely-known, it’s Cascade. All in all, the American IPA is an aggressively bitter, moderately strong type of pale ale. The fermentation should be clean and it should get out of the way of the hops.

Appearance.
P-Wing is served in a smaller format snifter style glass. I tried to snag a growler of this beer while I was at Braindead, but the brewery charges an arm and a leg for it. Alas, I had to leave this session as a one-beer drinking session. Color is a medium orange. I see a good amount of haze on this beer, but I don’t knock a dry hopped beer for it. As the beer warms and as I near the end of the pour, the beer clears quite a bit. 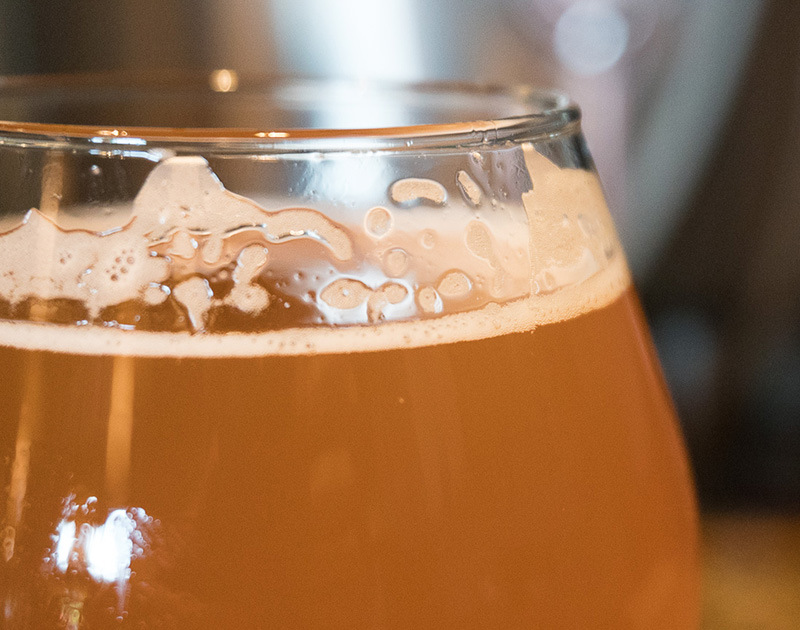 Aroma.
Unlike a lot of other IPAs out there, P-Wing is a fresh hop beer. Sometimes brewers will call this a “wet hopped” beer, so the two terms are sort of interchangeable. This means that when hops were added to this beer, the hops didn’t go through the normal post-harvesting process of drying and packaging. Instead, they were picked and rushed straight to the brewery. I’m playing it a bit fast-and-loose with the nitty-gritty details on the fresh hop thing, but that’s the gist of it. There’s an intense peel aroma going on here. I get a bittersweet, but enjoyable sense of grapefruit. Others may report a more general citrus aroma like orange. Either way, the initial aroma has a distinct and enjoyable rind and peel aroma.

Flavor.
I get a big citrus note on my first sip. It’s back with the grapefruit and I dig it. Along with the punch of citrus, I get a healthy wave of booziness. I did a double-take because of it because it’s just a boozy IPA, and at 8.4 percent ABV, it teeters on being called a Double IPA. About half way through this pour, my tongue tingles a bit and my face warms. Ah, there it is, that welcoming warming sense that washes over me where I begin to give less fucks. Weirdly, this sensation is more present on helmet beers for me, but I’m rolling with it on this pour of P-Wing. At the risk of sounding cliché, there’s a certain juicy element in play here, but it’s not a cloyingly sweet sort of thing. The hops are pitching in the juicy roundness here, and the beer finishes crisp with a wallop of hop aroma in the aftertaste. 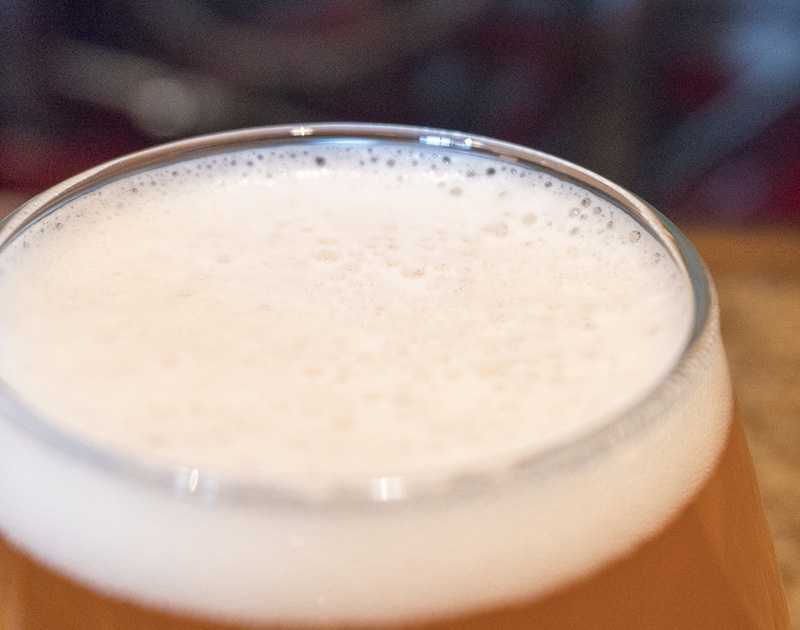 Mouthfeel.
On its description, Braindead states that the malt bill on P-Wing is made up of pale 2-row malt and cane sugar. So it sounds like the brewers got the malt situation dialed in just right, but then perhaps wanted to up the ante a little bit on the fermentability, while at the same time keep this beer drinking clean and bright. The cane sugar provides the yeast with more goodies to eat here, so this element is likely what propels the ABV higher than what you might expect. I can’t say that I have seen a simple grain bill like this before, but hey, it works! Some Saison style beers will have a small addition of pure fermentable goodness to likewise help boost the fermentables a bit. And like those beers, P-Wing has been fermented down to a very enjoyable final gravity. The finish is bright and crisp, and I get a little kiss from that boozy feel here again. Overall, the mouthfeel is deceptively smooth for this beer’s ABV.

Overall Impression.
I dig this beer. I think that Braindead has brewed a successful IPA with P-Wing, and I think that this is its best IPA to date. The grapefruit aroma and flavor from the Amarillo hops shines through on this beer and the rest of the hops in play add to its complexity. I’m guessing that because of the grain bill required to push the ABV up to its near-Double IPA status, and the large hopping schedule, this is not a very affordable beer to make. But that won’t stop me from ordering this beer if its on tap when I visit Braindead again.