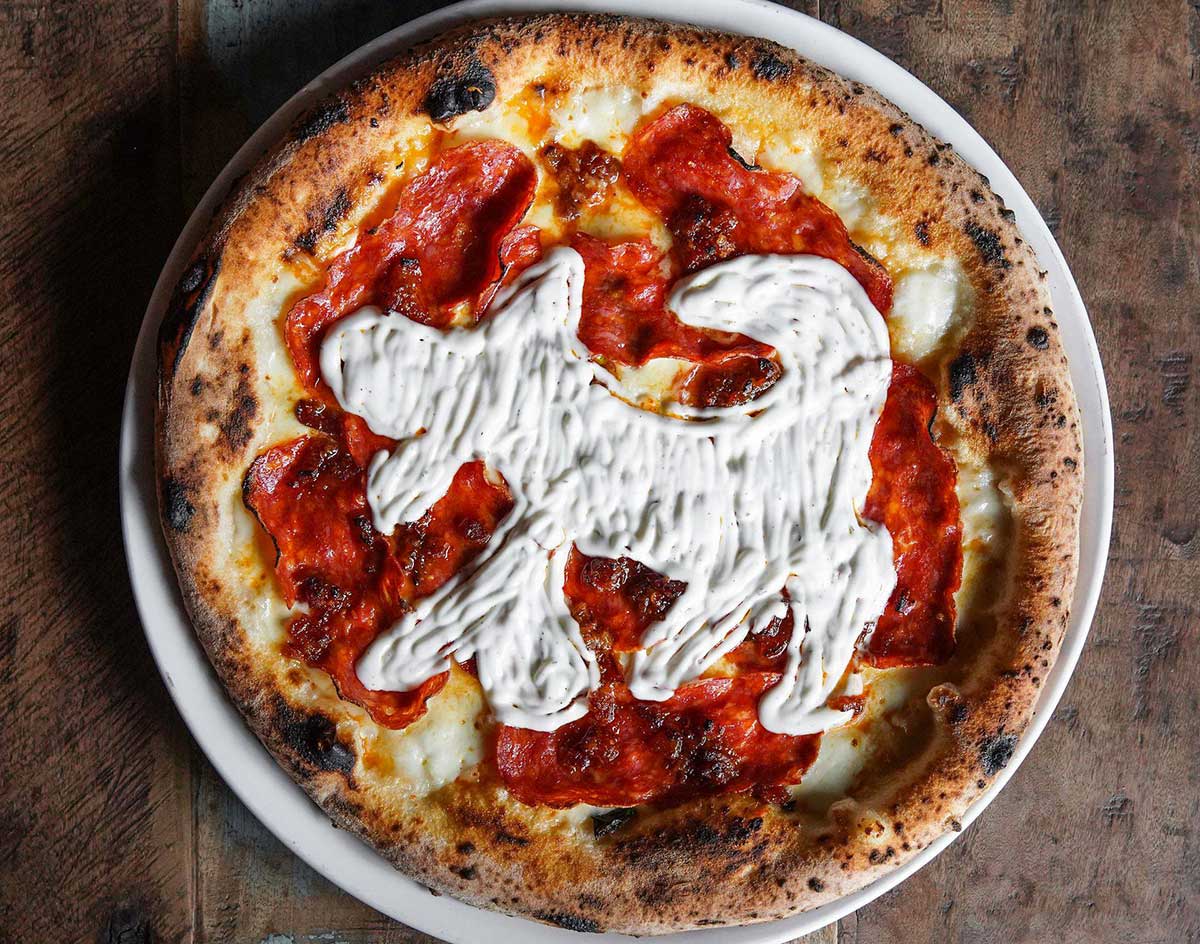 Update at 3:15 p.m. on Friday, March 20, 2020: Amidst the onslaught of terrible service-industry stories circulating as the economic repercussions of the coronavirus pandemic spread, here’s a bit of good news.

On Thursday, ranch dressing manufacturer Hidden Valley purchased $2,000 worth of pizza to be delivered to area medical professionals and first-responders during this tense time. Beyond simply charitable, this is notable because (as the below story notes), Cane Rosso has historically been vigilant in its anti-ranch-on-pizza stance, but has now temporarily lifted its ban on serving the dressing as a means to help drive pickup and delivery sales for the time being.

Reached this morning, Cane Rosso owner Jay Jerrier peels back the curtain and acknowledges that this is not the first time Hidden Valley has cheekily acknowledged the pizzeria’s anti-ranch edict.

“Hidden Valley has always been in on the joke,” Jerrier says. “After we sold the first bottle during the fund raiser for Beaumont Humane Society, they sent us a golden bottle of ranch. They got bits!”

Still, kind as the Hidden Valley support may be, Jerrier — along with his many restaurant-owning peers in Dallas, across Texas and beyond — says he remains laser-focused on getting word out that his shops are open and in need of support from folks who can afford to purchase their food at this time.

“Every day, we wait to see what fresh hell will be bestowed upon us,” he says.

Everything is different now.

While the mandate also prohibits gatherings of more than 50-people anywhere within the county, there are of course some caveats at play here during these uncertain small-business times.

For instance: While the ban prohibits dine-in options at your favorite area restaurants, breweries, wineries and distilleries, each area establishment that was previously legally able to do so is still allowed to accept pick-up and delivery orders. (We here at Central Track are currently working on some stories highlighting some of the spots taking up this option, but suffice it to say that pretty much most area eatery that can use this model for the time being is indeed doing so.)

As if anyone doubted just how drastically this shifts the local hospitality industry landscape, consider the case of the Dallas-sprung Texas pizza chain Cane Rosso.

Since opening its first brick-and-mortar location in Deep Ellum in 2011 after initially being launched as a mobile catering company, the pizzeria has been vehement in its crusade against people putting ranch dressing on its pies, arguing that the condiment only masks the flavors that its pizzaiolos work so hard to craft.

Cane Ross has been so vigilant in this effort that it has even gone so far as to mostly ban the substance in each of its restaurants — all nine of them (six Dallas-area locations, plus one each in Fort Worth, Houston and Austin). As a tongue-in-cheek exception to this rule, the pizzeria long kept a bottle of Hidden Valley ranch dressing inside of an enclosed case at its flagship location, placed right next to a sign saying that it could only be purchased for a $1,000 investment. Only once has anyone actually gone so far as to actually pony up that kind of cash — and they did so at a cost far higher than just that when, in 2016, that bottle was sold for charity and raised $20,000 for the Humane Society of Southeast Texas.

Times, however, are a-changing.

Last night, in response to the ban on dine-in restaurants, Cane Rosso owner Jay Jerrier announced in a Facebook post that, as he and his business struggle to remain afloat during these coronavirus-inflicted times, all of his stores will finally concede to the ranch dressing demands of the public:

“Your pals at Cane Rosso are saying screw it and lifting our long-standing ban [on ranch],” the note from Jerrier reads. “Do your worst.”

While, in reality, the move is a small concession, it certainly stands as a symbol of just how quickly and greatly everything in Dallas — and elsewhere — has changed in the last, oh, 72 hours or so.

It should be said, though, that this offer isn’t likely to last beyond the current mandate that everyone stay the fuck home whenever they can. But if you are going to be stuck at home, you might as well take Jerrier up on this option while you can. The staff at his restaurants — and, really, all restaurants in the city — could use the support.

So, y’know, feel free to go full Melissa McCarthy-style nuts on ranch while you can:

Just, y’know, make sure you wash your hands after the fact.