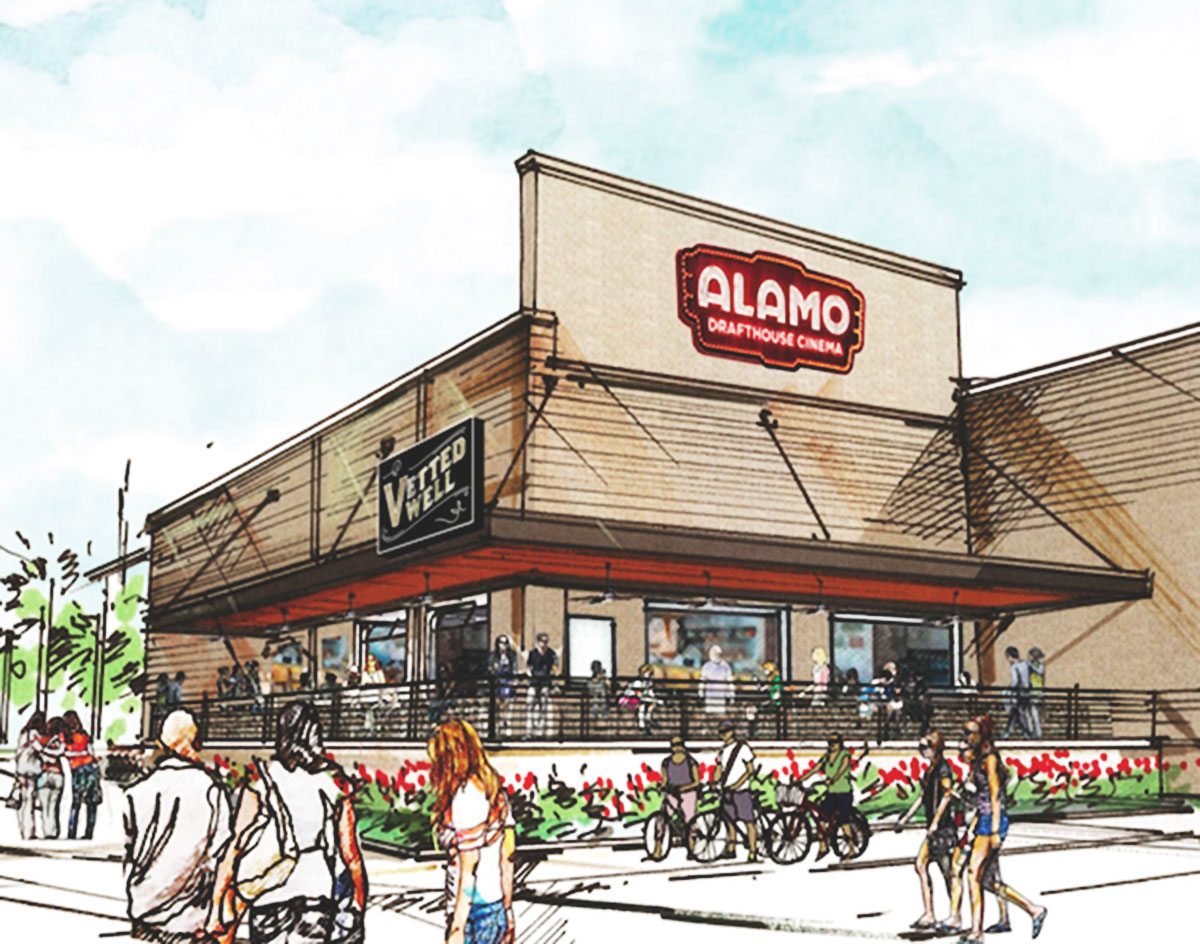 The Company Is Opening Its New Lake Highlands Theater Targeted At Carless Movie Goers This Month. And, Next Month, Its Irving Location Will Open.

Like a horde of zombies expanding across a region following an outbreak, the Alamo Drafthouse brand is slowly but surely taking over North Texas.

In other words: All is going to plan.

After the region’s original Richardson location opened in 2013, Alamo opened up its Cedars location in Downtown Dallas in 2016, then announced a second Dallas location in Lake Highlands, a location within the Toyota Music Factory location in Las Colinas and a recently announced new Denton spot that are all set open in the first half of this year. Even in the face of rapid cinema growth in the area all across the industry, the only bump that Alamo appears to have faced along its road to regional domination is its decision to scrap plans for a Little Elm location after announcing them.

Yesterday, it was officially announced that the Las Colinas location will be opening in April. And today, thanks to a press release, we know that the Lake Highlands spot will be hosting a grand opening celebration on March 28. We also know some additional details.

Like, for instance, how the Lake Highlands joint is located at the intersection of Abrams Road and Skillman Sreet, how it will feature theaters of varying capacities from 35 seats to 196 seats, and how, much like the Cedars location, it will also boast its spinoff restaurant-and-bar concept Vetted Well.

Perhaps most exciting, though, is the press release language that indicates how this Alamo location is targeted at the carless movie-going set. Located next to the White Rock Trail, this Alamo hopes to have a littler more outdoorsy appear than most theaters, with a row of bike racks — hey, the whole city could use those — being set up to greet patrons who might approach the cinema from the trail. The idea, management told Guidelive today, is to have “a little Katy Trail vibe in Lake Highlands.”

But there’s reason even for the non-bicycling set to get excited: Everyone — and not just teachers, who are getting discounts across the chain for a week this month — who visits the theater after it softly opens on March 20 through its grand opening celebration on March 28  will enjoy discounted tickets, food items and non-alcoholic drinks as the staff is trained in operations.

As for any details beyond that — including the theaters first-of-its-kind Sony laser projection system —  read the full press release below.

Dallas, TX – March 13, 2018 – Alamo Drafthouse Lake Highlands will soft open on Tuesday, March 20th and celebrate its official Grand Opening on March 28th. Marking the cinema chain’s third location in the Dallas-Fort Worth metroplex, Alamo Drafthouse Lake Highlands is located in Dallas’ Creekside Shopping Center at the corner of Skillman and Abrams and will feature Alamo Drafthouse’s signature mix of first-run films and curated specialty programming, an extensive made-from-scratch food and beverage menu, premium luxury recliner seating throughout every auditorium, and a bike-friendly location that backs up to White Rock Trail. The theater is also home to Vetted Well, a bar and event space featuring an extensive lineup of local craft beer and a patio with direct access to White Rock Trail.

“We are thrilled to finally open our location in Lake Highlands! The Lake Highlands community has already been incredibly welcoming. We’re looking forward to being a neighborhood theater as well as offering a watering hole along the White Rock Trail.” says Alamo Drafthouse DFW COO Bill DiGaetano.

Alamo Drafthouse Lake Highlands’ eight auditoriums range in size from 31 seats to 196 seats, with combined seating for 816 moviegoers. Vetted Well has seating for 150 guests, including a patio that overlooks White Rock Trail. Free parking is available in the shopping center parking lot, and the theater will feature plenty of bike racks along the Vetted Well patio for guests entering from White Rock Trail.

Staff training days begin March 20th, where those eager to get a first taste of Alamo Drafthouse Lake Highlands can enjoy discounted food and non-alcoholic drinks while staff train in the new space. Tickets are on sale this evening at drafthouse.com, and guests will be able to enjoy the best of Hollywood and independent cinema, like the upcoming READY PLAYER ONE and ISLE OF DOGS, along with Alamo Drafthouse’s eclectic repertory programming including an Amblin retrospective and a month-long celebration of Studio Ghibli.

Then on Wednesday, March 28th, Alamo Drafthouse Lake Highlands will celebrate its official Grand Opening with the highly anticipated new Steven Spielberg film READY PLAYER ONE. And in true Alamo style, the grand opening will feature immersive themed opening night activations and events! Guests will enjoy retro arcade games in the lobby, state-of-the-art VR demos, an ‘80s DJ, a special food and drink menu inspired by the film, along with plenty of other surprises!

Alamo Drafthouse Lake Highlands also features the first US installation of the new Sony 4K Digital Cinema Laser Phosphor Projectors, providing an unparalleled picture quality and cinematic presentation. In addition to the state-of-the-art projection, Alamo Drafthouse Lake Highlands continues the company’s high standards of delivering the best theatrical experience to its guests with custom pre-show entertainment before each film, rather than of a barrage of ads, and a strict “No Talking or Texting” policy during the film.