Documenting Dallas’ Bike Sharing Mess, One Gram At A Time. 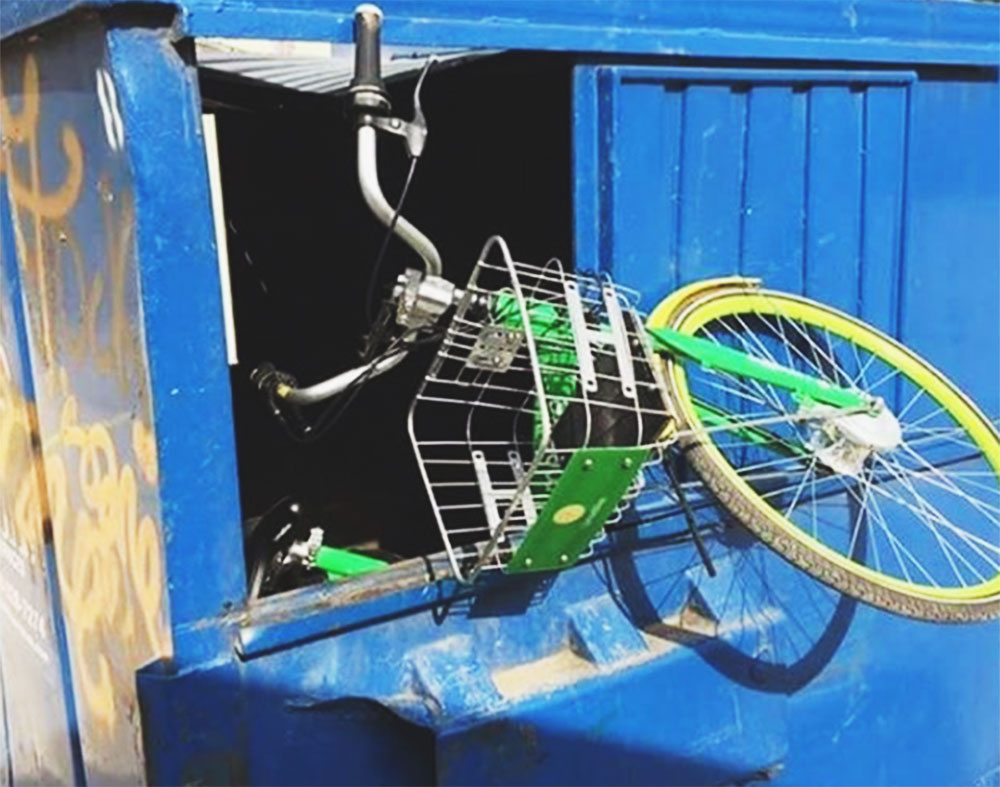 Meet The Local Hero Using Instagram To Document The Messes That Have Formed Around Dallas Since Bike Sharing Came To The City Last Summer.

These days, it seems that bike sharing bikes can be found on every street corner in Dallas, either in their upright position or, more likely, just laying there — and somehow in stronger numbers by the day.

You could sidestep them. Maybe you’ll vent about them on the spot. If you’re especially creative, you might find a way to employ them as some sort of prank. Almost certainly, you’re going to bitch about it on the internet.

Or, well, that’s what Josh Miller of Dallas did anyway. In early December, he launched the @dallasbikemess Instagram account as a means to poke a little fun at and document Dallas’ battles with bicycle overload.

In just about a month of operation, Miller’s account, which was set up for “chronicling the mess of rental bikes littering Dallas” per its own bio, has gained more than 7,000 followers.

Miller’s efforts have attracted an audience because they approach the situation with a sense of humor, which is a far cry from how so many others are dealing with the bike share craze.

In Dallas, there’s been a massive uptick in calls to 311 from people reporting bikes. In fact, from November to December, the number of complaints almost tripled from 50 to 145 complaints — and that number seems to still be rising In January alone, there had already been 77 complaints about the bikes as of yesterday, with still two-thirds of the month to go.

Highland Park, on the other hand, has taken a much more aggressive approach to the bikes, enacting an ordinance this week that essentially bans them from being within Highland Park city limits. The language of the measure basically says people can’t just leave bikes in the city, meaning that the companies must collect their bikes daily so to not risk them being impounded. And if they don’t collect them from the impound? Highland Park says it can auction off the bikes for profit.

Because we prefer Miller’s way of approaching the situation, we reached out to him to learn more about the reactions his efforts have earned him from the public and from he bike sharing companies alike.

Why did you decide to make the @dallasbikemess Instagram account?
It all started probably in mid-November. I’d already seen the bikes around. Then my wife and I went out to the DMA, for a walk to the park and then to dinner. We saw the bikes everywhere. At dinner, we made some comments that we should take pictures of it and post it on an Instagram account. A couple of weeks later, on December 5, I was driving into work and saw a VBike laying in the medium. I took a picture of it.

What was your reaction when you realized that your account was becoming popular in the Dallas area?
It really surprised me. I don’t really know what to think. I think people are frustrated by the bikes being everywhere– especially along the Katy Trail. I think they hate seeing them dumped along the trail. I get a lot of pictures of bikes on the Katy Trail.

What are your own thoughts on the bike share programs?
I’m not against them at all. I’ve ridden those LimeBikes and VBikes. It really is a great idea in concept — the idea of being able to grab a bike and to go quickly nearby for low cost. It is a really great idea. I just think there’s probably too many of them, and there’s not really enough good places to park them.

Have the bike share programs themselves noticed your account?
All of the bike companies have commented at one time or another. MoBikes just launched, and on one of their  first days, I posted [a picture of some] MoBikes laying down. They commented and said, “We dispatched a team right away, and the bikes are all organized on the sidewalk — the way they were initially set up.” So even the newest entry into the market, they are aware of it.

Can anyone send you photos for you to post in your account?
I ask people to DM pictures to me [on Instagram]. I also have a Gmail account where people can email me. I’ll post them up and give them a shout out. I get a lot of them now, so I don’t post every single one them any more. I’ll look for some of the better ones. But, yeah, I love getting pictures from users and posting those ups.

What’s your favorite photo that you have posted in your account?
I have a couple of favorites. There’s one that a follower submitted of a LimeBike that was stuck in a dumpster, and they did tell me that they took the bike out of the dumpster and set it back with its friends on the sidewalk. There was another one, too, of a VBike in Turtle Creek.

How long do you think you can keep this account up?
I don’t think that the account will go on forever. I think that, once there’s a solution, there probably won’t be quite as many bikes everywhere. Once everything settles out, it won’t be as fun or as necessary. There certainty won’t be as much content. But, for now, it’s something I plan to keep doing for a while.