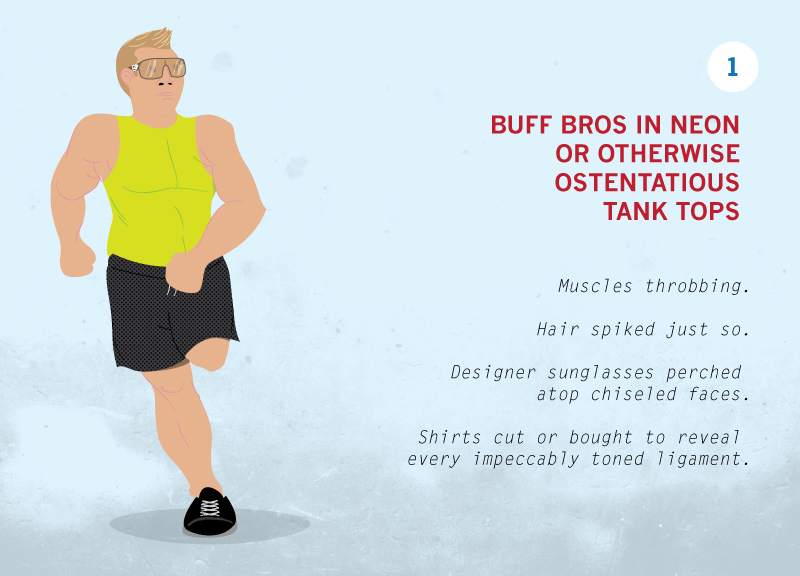 The Five Types Of People You See On The Katy Trail.

It’s that time of year again. Dallasites are engaging in their last-ditch efforts to get swimsuit-ready for the pool season.

It’s hard not to notice all the extra effort. Everywhere we look, it seems as if people are working out these days. Especially so on the Katy Trail, which has seemed busier than ever of late.

That much isn’t altogether surprising. The Katy Trail is perhaps the epicenter of the Dallas fitness world.

But, whether we like to admit it or not, the Katy Trail is also quite the place to see and be seen (or, uh, mugged). On any given day, you can spot Troy Aikman, cast members of various reality shows and some really cute dogs walking about.

Spend enough time on the trail and you’ll also start to notice other people. Indeed, there exists a whole host of Katy Trail regulars, each unique and special in their own right. To help you wade through these complicated waters, we’ve compiled a comprehensive list of the five types of people you’re most likely to see on the Katy Trail and the traits you can use to identify them. 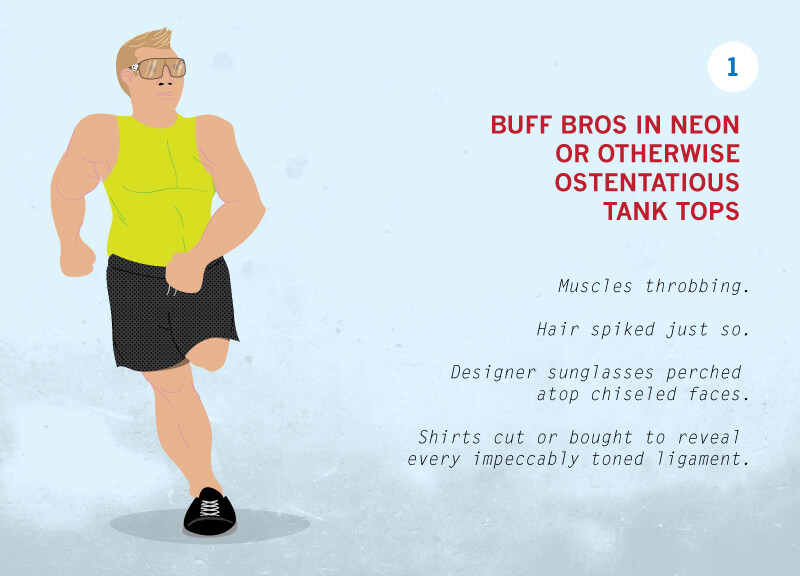 They jog past, their tan muscles throbbing with each stride, their hair spiked just so, their designer sunglasses perched on their chiseled faces (totally impractical if you’re actually sweating, by the way, as they’ll slide right off) and their shirts cut or bought to reveal every impeccably toned ligament. It’s an ensemble that nearly screams, “How amazing do I look?”

These types take themselves rather seriously, though. Or, well, they take their game of attempting to attract passersby seriously. 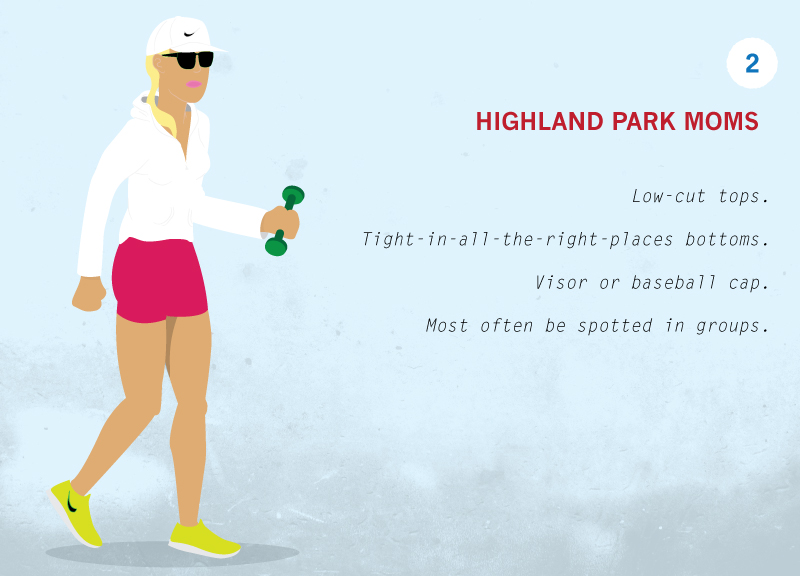 2. Highland Park Moms.
Or Uptown Moms. Or University Park Moms. Or even Lakewood Moms looking to get away from their mundane White Rock Lake routine. The HPM is the woman who passes you on the trail in a power-walking frenzy, reaching impressive speeds for someone with so slight a frame.

Her outfits are always impeccable, too — matching lululemon low-cut tops and tight-in-all-the-right-places bottoms, topped with a visor or baseball cap that says, “I’m trying, but not too hard.” Often, they are accompanied by one or two other HPMs, expertly killing both the “girl time” and “exercise” birds with one perfectly manicured fist.

This specimen can be spotted at any time of day, too. You don’t think they actually have a day job, do you? HPMs are unique in how they differ from most other females on the trail: They aren’t trying to impress the opposite sex, but rather the other HPMs. If one’s real world social status is to be determined by their exercise demeanor and ensemble, then the Katy Trail is the Ms. Universe runway of the stay-at-home-mom set. Don’t believe us? Next time you spot an HPM type, trail her for a bit. You’ll hear a petty “Was she wearing Shape-Ups?!” remark — or something similarly as vicious — within 10 minutes, promise. 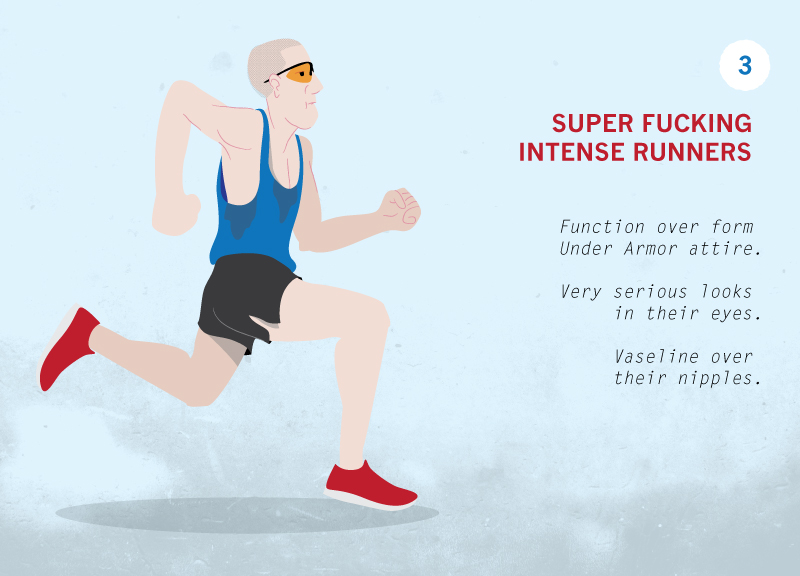 3. Super Fucking Intense Runners.
The SFIRs are the kings of the trail. Or at least, they should be. But, instead, they leave the petty status battles to the meatheads and the girls who adore them. SFIRs can’t be bothered. They’re too busy worrying about their mile time to give even a passing thought to trail hierarchies.

Somehow, though, this laissez faire approach works for them, as no one garners more respect nor looks better than these guys in their “function over form” Under Armor attire. It’s like how Olympic swimmers still manage to look totally sexy in those tragic little “aerodynamic” unitards they wear.

If we’re using flow of traffic as any kind of gauge, the SFIRs rule the roost, as everyone knows to clear the path to make room for them to pass. You can revere them, applaud them or hold out a cup of water to them. Just don’t get in the way of someone midway into their 12-mile run. That’s a no-no. 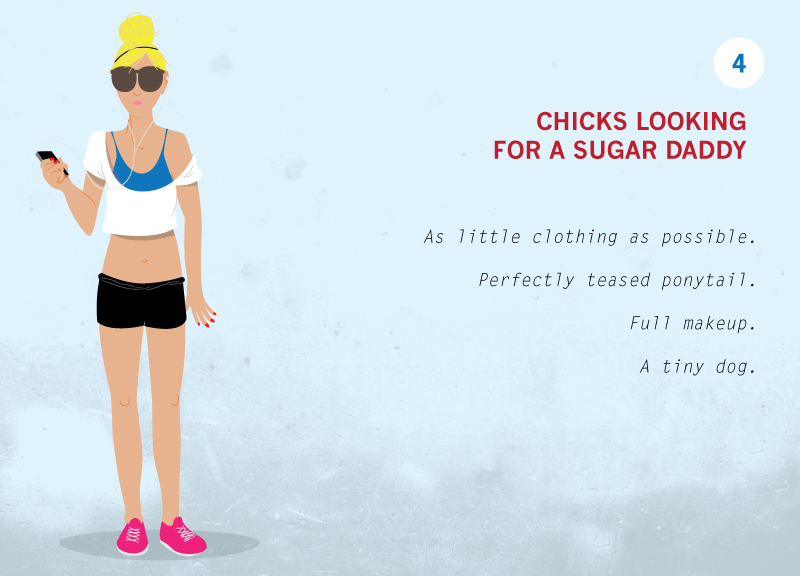 4. Chicks Looking For a Sugar Daddy.
The Buff Bros’ female counterpoint, CLFSDs take their trail-ing very seriously. That means they wear as absolutely little clothing as possible. Shorts? Forget it. Hot pants? Meh. Brazilian-cut spandex panties? Now we’re talking. Their hair is always pulled into an impeccably teased ponytail, and anything less than full makeup will not do. Extra points for fake eyelashes!

They can usually be seen dragging along a Maltese on a pink leash as they attempt to “jog,” which is to say “move their body in such a way that ensures maximum bounce-ability of their over-salined chest while simultaneously wagging their hips like an amphetamine-ridden dashboard hula girl.” It’s a glorious sight to see. Though it may seem counter-productive as far as exercise goes, this is of no matter.

The CLFSD has one goal: She wants to attract the attention of Buff Bros. Imagine the Katy Trail as the Amazon jungle: The CLFSDs’ attire and gait are like the mating dance of the Bird of Paradise. 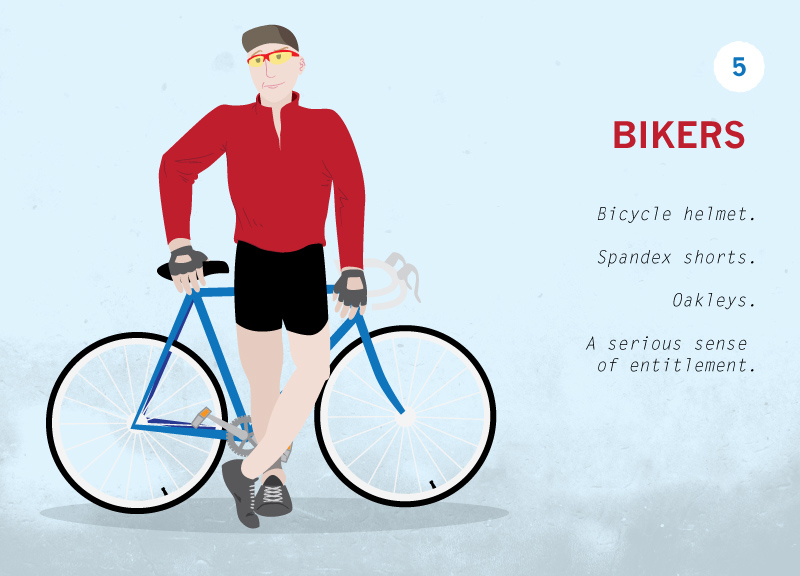 5. Bikers.
Fuck you, you entitled Bikers. Sure, the trail is “technically” for you too, but let’s be real here: Do you really need to bike on a 3.5-mile stretch of path when you have an entire city of roadways at your disposal? No.

“Well, you could say the same for the runners,” you counter. Wrong again. Sorry, but the average road bike speed is around 20 miles per hour. That’s still within the legal confines of the majority of Dallas’ posted speed limits. The average running speed is around 8 miles per hour. This is well below the legal confines of most posted speed limits. Thus? Bikers can keep up with road traffic while runners cannot. It’s simple.

Weaving through crowds of slowpoke pedestrians is not only frustrating for the bikers and and runners alike, but it’s dangerous, too. That “ON YOUR LEFT!” warning tactic isn’t doing anyone any good when everyone’s got their fucking iPods in.