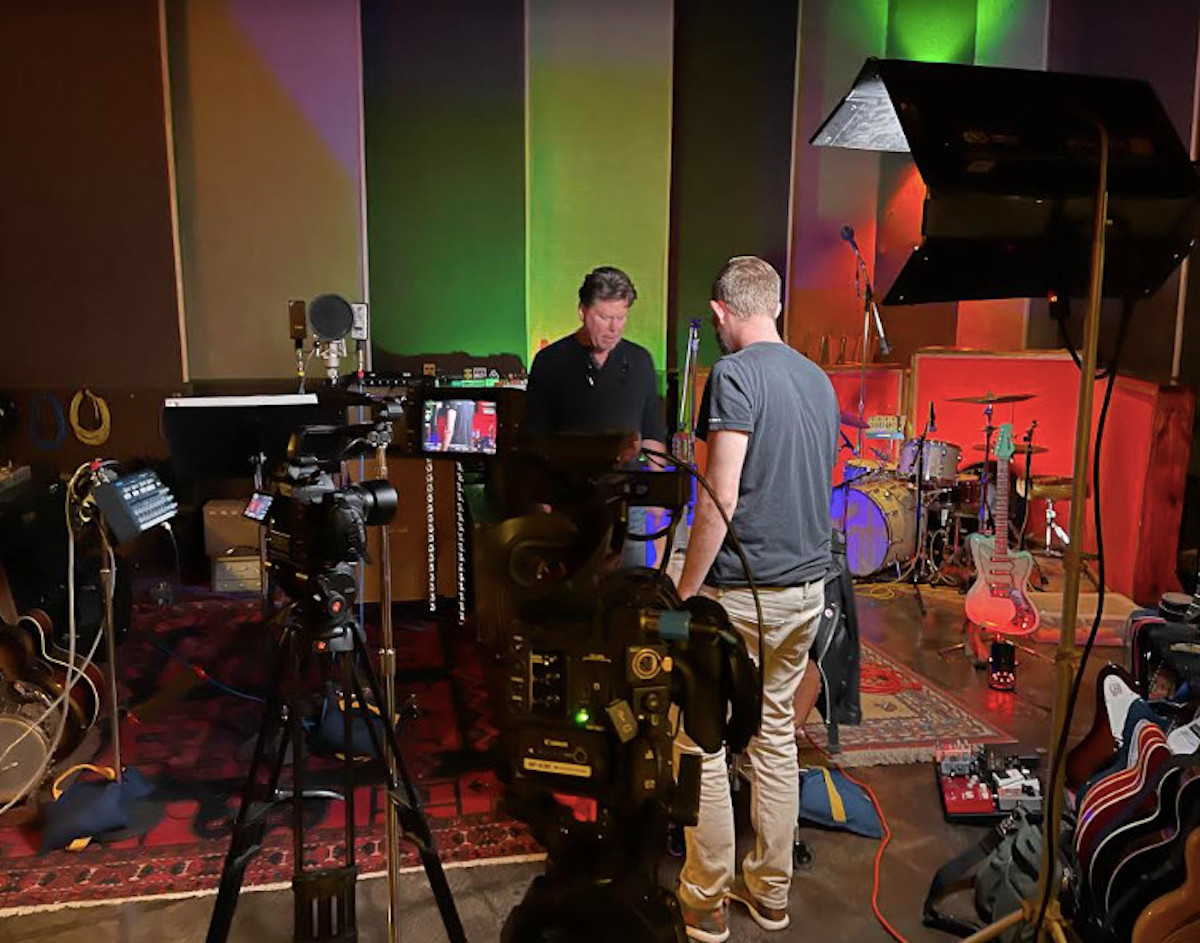 The Director On Soul Rebel, His Upcoming Documentary That Explores How Music Producer Jeff Saenz Overcame His Life-Threatening Accident.

Eric Foster has been behind a camera many times, but he’s tackling a new adventure these days: director. And he’s directing a very special documentary about Jeff Saenz’s life after the freak accident that nearly killed him in 2021, Soul Rebel.

Saenz recovered after multiple surgeries over a few months, but he had both of his arms amputated. As a musician, motorcycle enthusiast and studio owner/engineer, as well as a father, it was a devastating and tragic story that happened to one of the most celebrated guys in the Dallas music scene.

But, as the trailer for the in-progress documentary shows, this is about how to take on a tragedy and pick yourself up from it. There was an outpouring of love at the Double Wide last week as Saenz had a one-year “anniversary” show where he got up and performed. Seeing that kind of love inspired Foster even more.

We spoke with Foster via phone earlier this week to get the lowdown on why he decided to make Soul Rebel, what he’s done so far and what he hopes to do with it when it’s done.

Prior to doing this documentary, did you have a relationship with Jeff or Modern Electric?

I did. I’ve known Jeff for about eight years. Beau Bedford, who does a lot work up at Modern Electric, is my boss. He started an ad agency in 1981 and I worked for the agency. They have a sister company that’s a production company. I also work for that. Beau and Jeff are really, really good friends. That’s how I met Jeff.

I’ve been up to Modern Electric a lot over the years. We’ve shot some of Beau and Jeff’s artists. They were together with each other in the Texas Gentlemen.

What do you remember hearing about Jeff’s accident?

I found out about it through Beau. He was up there at the hospital the night of the accident. A couple of days after the accident, Beau asked me if I heard about Jeff. He filled me in. Early on, it was so touch and go. None of us knew if he was going to make it. To have that much electricity going through your body, it’s nothing short of a miracle that he’s still with us today. It’s such an amazing story.

The fact that Monica [Cooper, Saenz’s partner] and the neighbor were able to save his life is also an amazing story in its own right. They both risked their own lives to get that electric line off of him. I can’t imagine what they went through.

What made you want to make this documentary?

It’s an interesting story. One of my co-workers came to me with this idea. A film company was having a contest. You could either do a documentary or a narrative or a spec ad. We talked about it and I always wanted to do a documentary, but I never really had one worth telling. That same day, I had seen a post from Jeff on Facebook and I was struck by how positive and upbeat his post was. At that time, he already had both arms amputated. Seeing how upbeat he was, I thought this would be an inspiring story.

Jeff is a musician, a producer, he built road motorcycles – and these are all things he can no longer do. I went to Beau and we talked about it. Beau talked to him and he said yeah. I went to Modern Electric and I met with Jeff and I walked him through what we were seeing as far as a documentary was concerned. 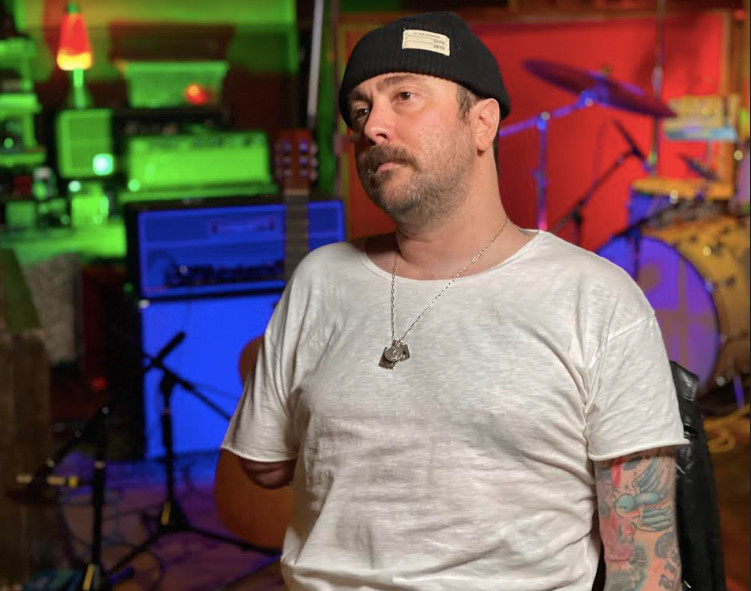 When I met with him, seeing his attitude about life, the fact he was so grateful to be alive was incredibly heartwarming and inspiring. I told him, ‘That’s the goal of this documentary — showcase that your life might be going through these dark things and [if] you don’t think you’ll pull through it, you gotta keep plugging away.’

In one of the early interviews with Jeff, he said when he talked with a nurse, he said he wasn’t sure he’d make it through this. And she said, “God gives you the power to make it through what you’re gonna make it through.” Obviously we’ve seen that in his life. The fact he is positive and he’s upbeat.

To you and I, I can’t imagine losing your arms. Everything you could do before this now is off the table. To keep that positive attitude, it’s an amazing, powerful story.

When I’ve got things in my life that are going wrong and then I put myself in Jeff’s shoes, there’s a little bit of difference. You know, when my car won’t start or I spill coffee on my pants, this is nothing compared to what Jeff is going through.

Documentarian Joe Berlinger, who made the Paradise Lost documentaries and Some Kind of Monster, once said that making a documentary is like making the inverse of a movie. You shoot everything you can and then you sculpt the script and the narrative based on the footage. Is that the case with Soul Rebel?

I would say that’s a very safe assumption. The story is there. We don’t have a script or a storyboard. Right now, we’re compiling all these different interviews and then we see how they work together once we get into the edit. We just started editing the piece. The story is there, but we have to be true to it and tell it in an honest way. It’s different for me. I’m used to working in the ad world where, “Here’s your script. Here’s your story. You go shoot that.”

I know there are some tricks that documentarians, like enactments of events that illustrate what the talking heads describe. I noticed them quite a bit in the recent Netflix documentary series, Keep Sweet: Pray and Obey. They have a scene where they show a TV journalist on the phone, but you can tell that he’s not actually on a phone call. Do you feel the temptation to do reenactments?

No, not at all. We’re not going to recreate anything. That could be kinda cheesy and I don’t want to make them relive stuff like that to begin with. We have the actual 911 call. It’s so much more powerful to hear what’s being said and hear them, rather than try to recreate them having an ambulance show up. We’re gonna let the story tell itself.

We’re not trying to sugarcoat anything or make light of anything.

Do you have a loose timetable of how long you want to edit versus trying to premiere this somewhere?

That’s still up in the air. We want to talk to as many people involved in this story as possible. We talked to his parents a couple of weeks. We’ve talked with several friends, but there are several other people that have been instrumental in this story we need to interview to tell the entire story. We’re hoping to have something done by September. As far as a premiere, we haven’t gotten that far yet.