Everything’s Waiting For You. 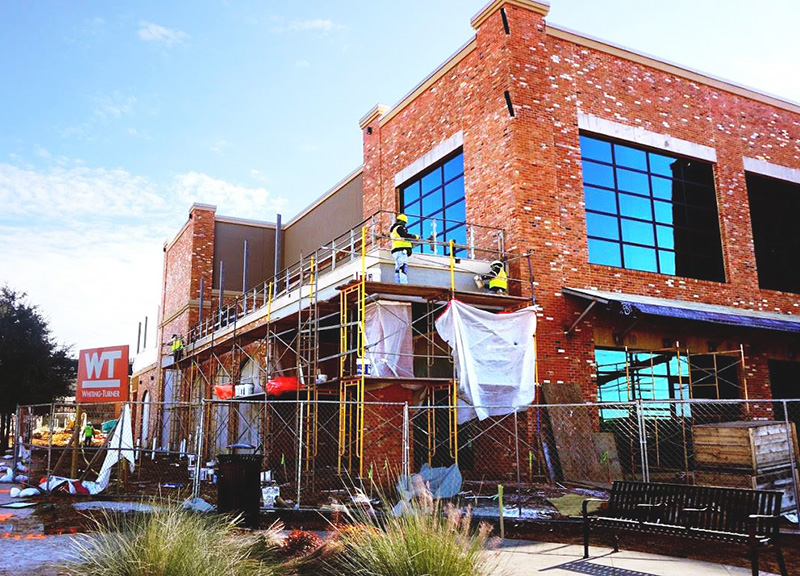 The New Alamo Dallas Opens February 12. Here’s What We Know About It.

For years, the film nerds of Dallas had longed for an Alamo Drafthouse to open up in the metroplex. We tweeted our wishes, emailed our desires and even trekked to Austin whenever we could to check out Alamo’s unique programming and to make our cases in person.

Then, three years ago, we got our wish: The Alamo Drafthouse Richardson opened its doors in August 2013 and, ever since, it’s been exactly what so many of us had hoped it would be. It’s been a beacon for repertory screenings, great food and local beer — not to mention a great place for tossing annoying phone users out of the theater during a film. Their quality of customer service and deep love of film makes this it one of the best places to see movies and, also, the singalongs are way fun.

Look what just came in! Check out our sign at the corner of South Lamar and Cadiz streets this February.Posted by Alamo Drafthouse Dallas / Fort Worth on Friday, January 22, 2016

Of course, with time, our wants — or at least those of us who don’t live out in the suburbs and prefer not to travel outside of I-635 for any reason — have changed a bit. And now the Alamo is looking to help there, too: On February 12, a new Alamo Drafthouse will open on South Lamar Street in The Cedars. Unlike the other two new Alamos also set to open in the region in the coming years, this one will exist right next to the beating heart of Downtown Dallas.

This weekend, we attended a media event about that theater’s impending arrival. And, based on what we heard there, it seems that, from its location to its programming, there will be lots to love about this new space.

Here are the five most interesting things we’ve now learned about The Cedars’ Alamo Drafthouse.

February keeps getting closer! See you at the corner of South Lamar and Cadiz streets soon.Posted by Alamo Drafthouse Dallas / Fort Worth on Tuesday, January 12, 2016

The events programming will be unique to this space. While all Alamo locations pair first-run films with monthly programming that’s shared with the other theaterhouses in the now-nationwide chain, each specific theater also has its own spin of programming catered to its specidic audience. Former Central Track film critic James Wallace, the creative manager for Alamo Drafthouse DFW, says this spot’s programming will take a few months to feel out and naturally grow, but that he already has some initial thoughts for where to take things: “Richardson will continue to have its own programming, but we’re looking to do spin-offs for the Dallas area,” he says. For example? Richardson has Hopped-Up Cinema, where a local brewery pairs three of their beers with a film. Wallace is looking to try a Chefed-Up Cinema in The Cedars, where a local chef plans a dinner menu to go with a specific film. During the month of March, Alamo Dallas also will host a series of made-in-Dallas to really celebrate the city and area. Audiences can also expect to see some of the great films of 2015 getting second runs during the theater’s initial opening run. So, if you missed some indie greats like Ex Machina or are dying to see Mad Max: Fury Road again in the theater, here is your chance. Oh, and here’s something else to look forward to: Built into the space is an outdoor movie theater that will host special screenings.

The theater plans to team up with various community partners. One thing the Alamo prides itself on is partnering with community partners to bring one-of-a-kind entertainment offerings to its audiences. At the first North Texas location, that’s meant inviting the Richardson Symphony orchestra to play a John Williams selection before seeing Indiana Jones or bringing Mandy Patinkin to the theater for a Q&A after a The Princess Bride screening while he’s in town for a stage performance. Wallace hopes to bring similar events to The Cedars: “There’s so many opportunities down in Dallas for partnerships,” he says. “It will only become easier to partner with people we already partner with — like Texas Frightmare Weekend, Dallas International Film Festival, Dallas Comic-Con and The Arts District.”

The seats are going in at our Dallas location on South Lamar and Cadiz! The front row in every theater will recline with a footrest.Posted by Alamo Drafthouse Dallas / Fort Worth on Friday, January 15, 2016

Parking won’t be a huge issue. Being in a more urban area will create parking problems. Think about it: With this theater is just a stone’s throw away from the South Side Ballroom, will you have to fight concert goers for parking if you want to see Suicide Squad? Thankfully, the answer is no: There will be 400 parking spots exclusive to the Alamo in the area and, on busy nights, there will be a parking attendant in place to keep the concert crowds out and theater attendees in. Perhaps more exciting, though, is that there are two DART stations right around the corner from this location: One is about a quarter mile away (Cedars Station) and the another is literally just a block away (Convention Center Station). There will also be bike racks for the more sportier among us. Regardless: Rest assured, parking will not be a problem.

There will be discounted movies in the early days. To assuage some of the growing pains associated with opening a theater, preparing a kitchen staff for running a full menu and easing in service at the full second-floor bar, the Alamo will softly open its doors for business on Monday, February 8, with movie showings costing only a dollar. There will also be discounted food available for the first few weeks of opening.

There are going to be karaoke rooms (among other treats)! First of all: Karaoke rooms, you guys! Yes! There will be two outdoor patios for hanging out on and taking in the views of the Downtown skyline, too. And, inside, the theater will having some balling visual capabilities, with theaters readied for both 35mm and 4K projections.

So. You excited yet?

Things are looking bright over at the corner of South Lamar and Cadiz streets! See you in February 2016.Posted by Alamo Drafthouse Dallas / Fort Worth on Thursday, December 31, 2015

All photos via the Alamo Drafthouse Dallas/Fort Worth Facebook page.
No more articles