You Can Scream At The Sky About The Trump Presidency Tonight. 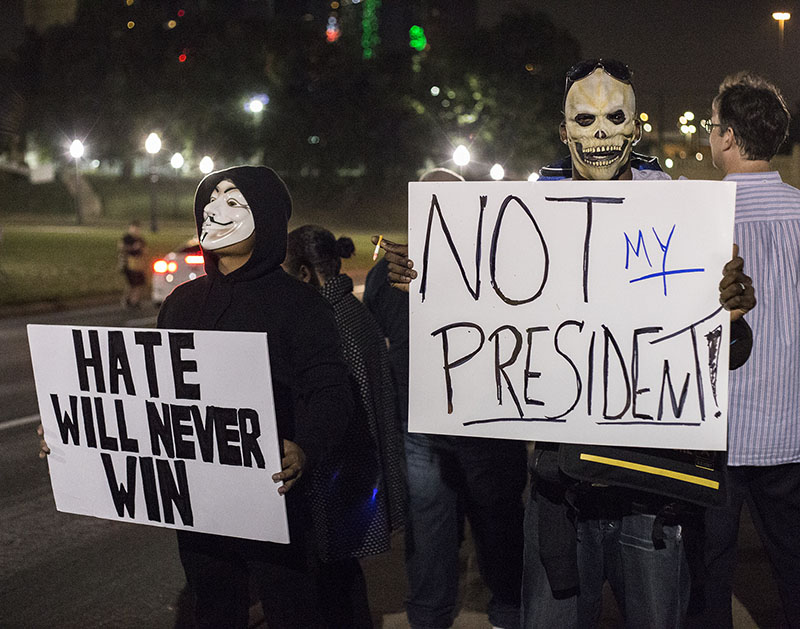 One Year After Trump’s Election, You Can Go To The Continental Pedestrian Bridge And Scream At The Sky Alongside Other People Frustrated With The State Of Politics.

Exactly one year ago today, local community organizer Soraya Colli was working as a volunteer for Hillary Clinton’s presidential campaign, anxiously awaiting the end of the day, at which point she expected to witness the election of the first female president in U.S. history.

But as we now know, that’s not how things turned out. Instead, it was Donald Trump who would become the 45th president, leaving a large chunk of the U.S. population reeling from what it saw as a devastating setback.

Many who felt that way, including a whole bunch in Dallas, took the streets in the days following the election (and, really, many times ever since) to protest the attitude and actions of the Trump administration. Today, you’ll be able to join a few of those frustrated souls at the Continental Pedestrian Bridge where they will be gathering literally just to scream out their frustrations at the sky.

Colli, one of the main organizer’s of today’s event, says it is intended not as a protest but mostly as a collective cathartic experience for people who haven’t felt safe or who are still feeling heartbroken from the past year.

“Maybe if we yell loud enough, we can tear the space-time continuum and go back to November last year and get more people voting,” Collli says, laughing.

The Facebook event set for 6 p.m. today is very much in the realm of the the “Yell ‘Bwah’ Like Hank Hill” event that went down at the beginning of October, and it has drawn the interest a bit more than a thousand people, with almost 300 committed to going.

“This is an event that is meant to be lighthearted and for people to be around like-minded people,” Colli says. “This will be different from protesting. We know we won’t be affecting policy change here.”

Colli says that anyone thinking of coming out tonight should know that this event is meant for fun — although she acknowledges that such a sentiment is often not enough in times like these.

“It’s not enough to vent to say I’ll vote Democrat or against the Republicans,” Colli says. “You have to get activated. Volunteer for campaigns and causes. When things are as frightening and dangerous as they are right now, your vote is fantastic — but, if you can get other people activated, then you’re going to make a much bigger splash.”