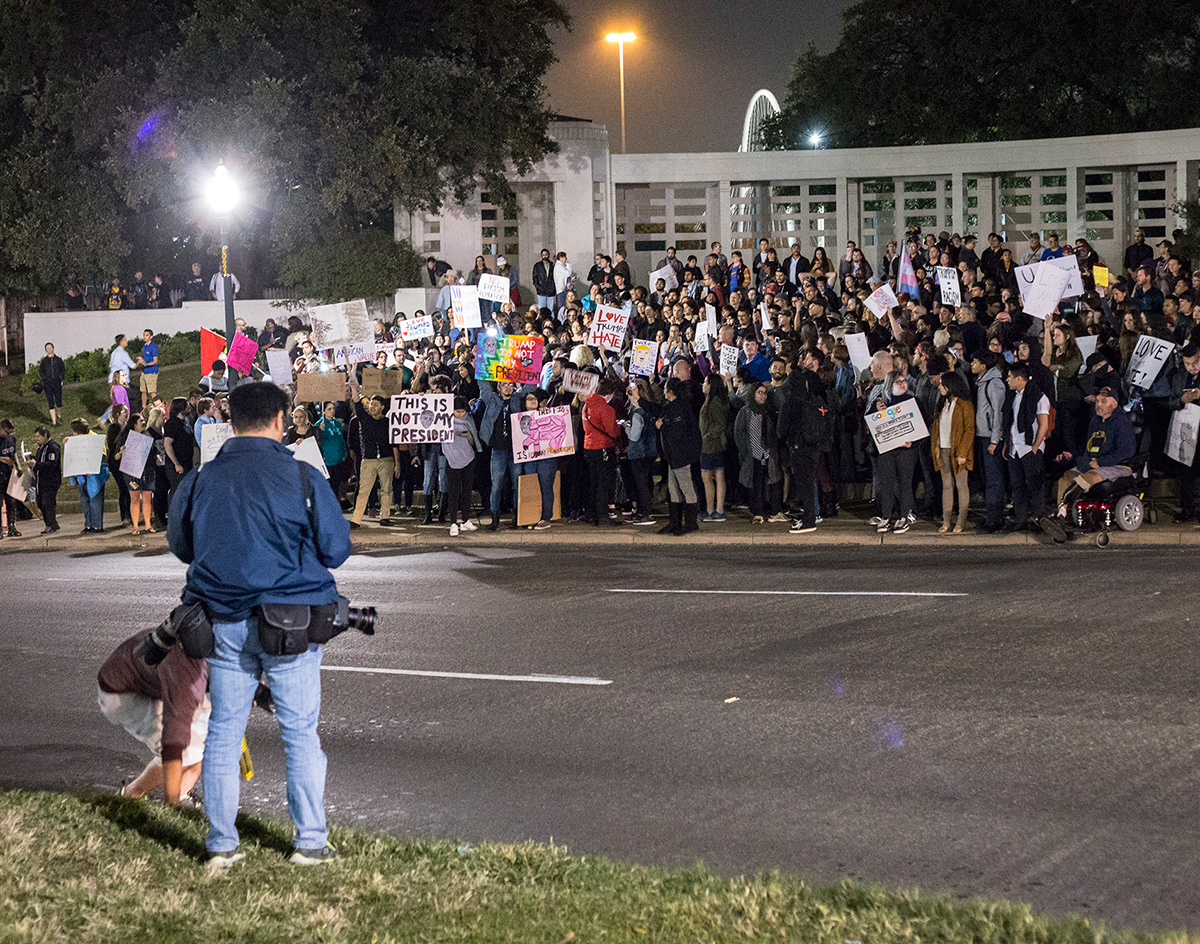 We Spoke To The Protesters At Last Night’s Anti-Donald Trump Rally In Downtown Dallas To Find Out What They Hoped To Accomplish.

A large crowd of protesters chanted “Fuck Donald Trump!” as they crossed Houston Street and walked past the Old Red Museum in Downtown Dallas last night. About nine police officers with disinterested expressions on their faces walked behind them.

This was the second straight night in a row that young Dallasites gathered in this part of the city to voice their displeasure over the election of Donald Trump as President of The United States. 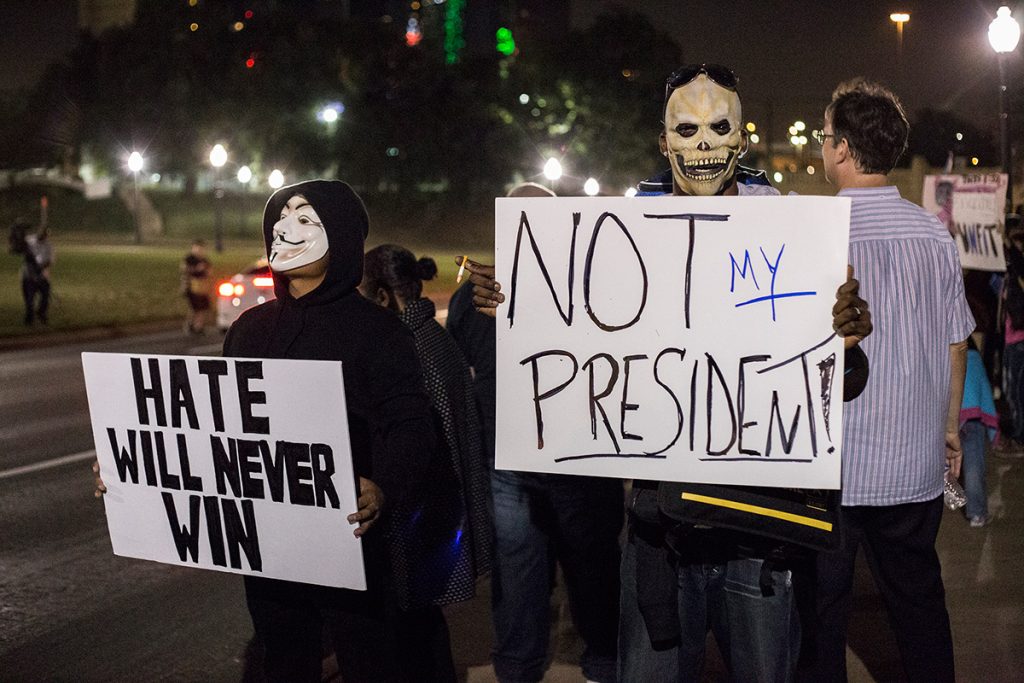 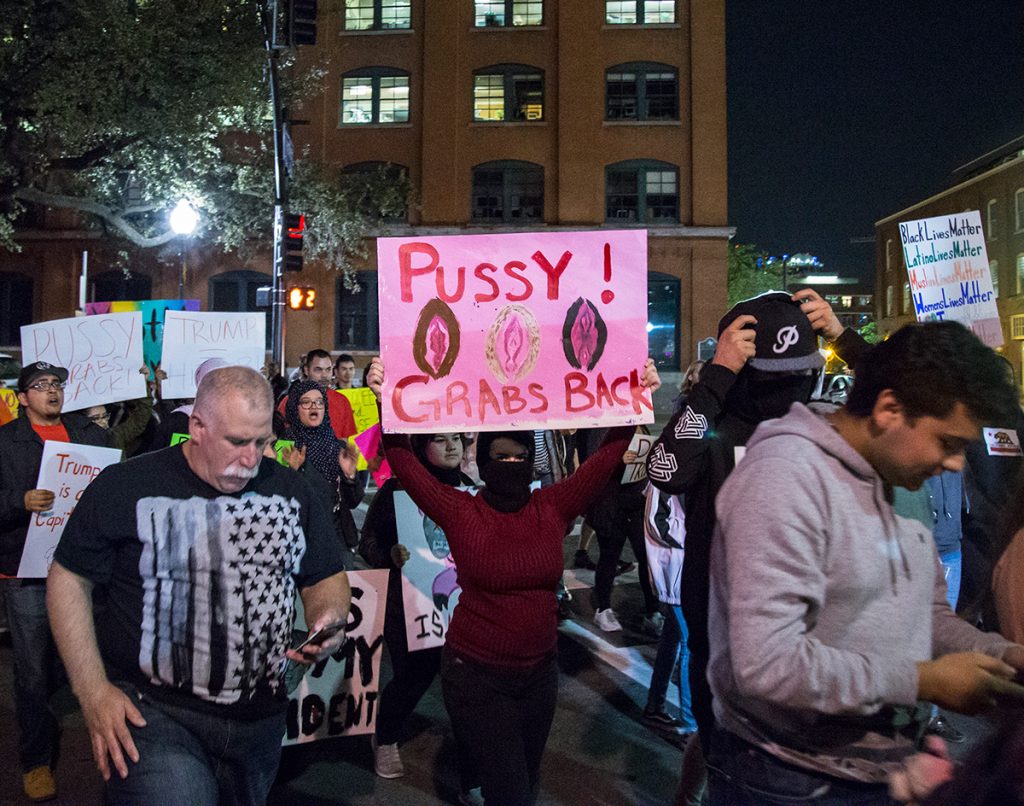 For the most part, this Thursday night gathering was a peaceful affair, with close to 1,000 people protesting various concerns. But, by the time the event fizzled out a few hours after its start, Dallas police had arrested three of the rally’s participants — two for impeding the flow of traffic, and a third for various charges (traffic violations, the unlawful carrying of a 9mm pistol and for the possession of methamphetamine).

These are indeed trying times for the youth of the city, but Dallasites are hardly alone in voicing their displeasure of late. The New York Times reported that numerous protests over the election of Donald Trump as the President of The United States were staged Wednesday night in major cities and college campuses across America. Protests are expected to continue taking to the streets for some time.

But with the votes cast and the election decided, what is the goal of these protests? Are there specific goals in mind beyond simply voicing many of the same concerns that had already come to light over the course of the election’s campaigning processes? That’s tough to say. 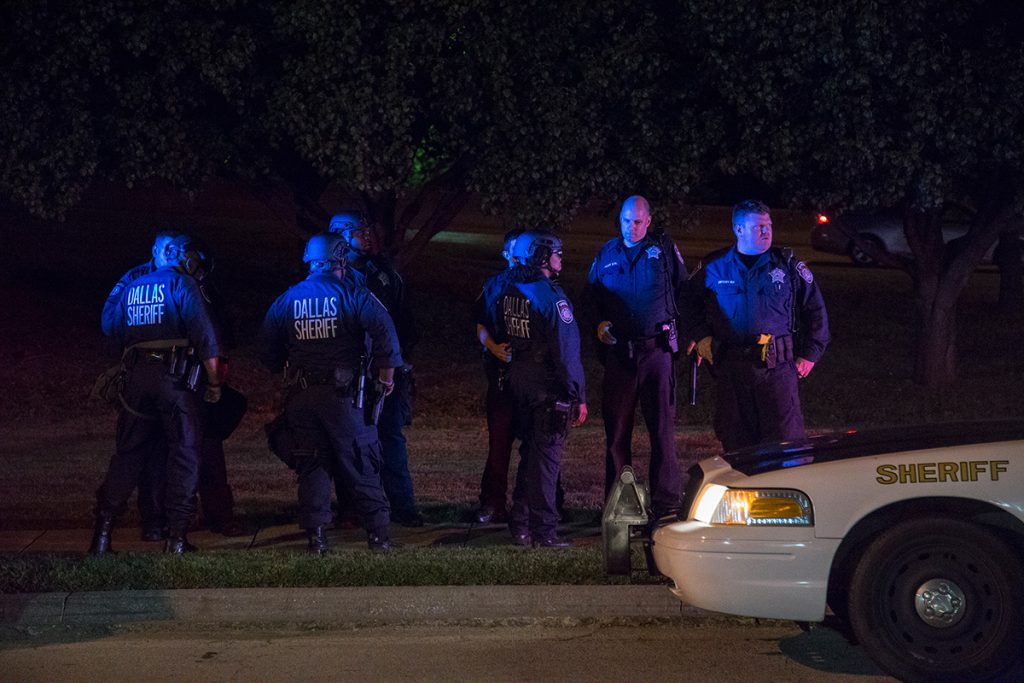 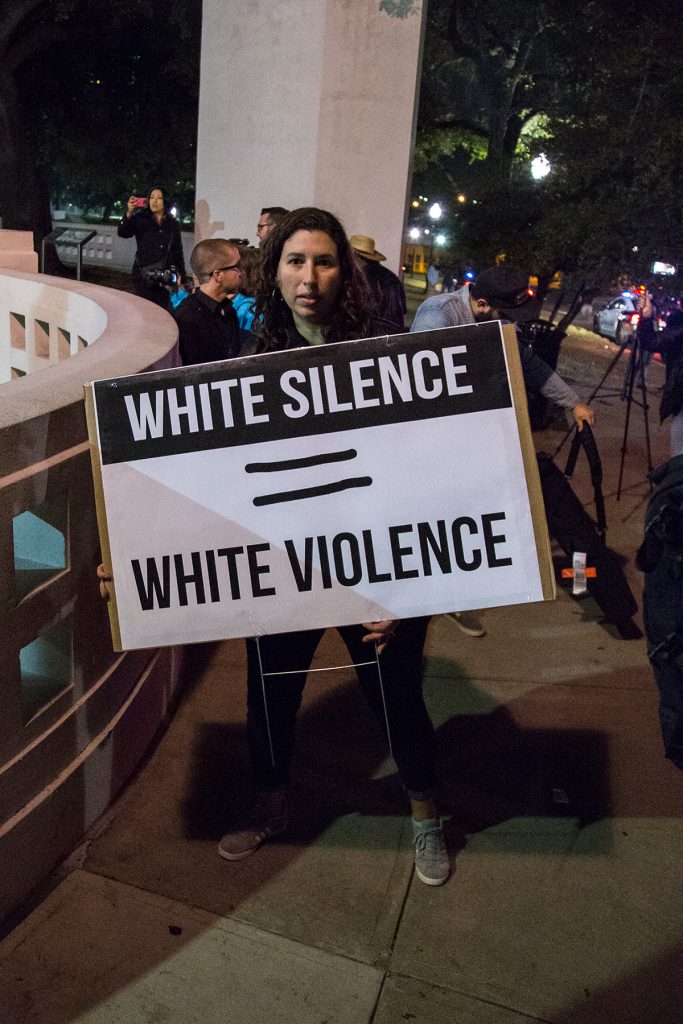 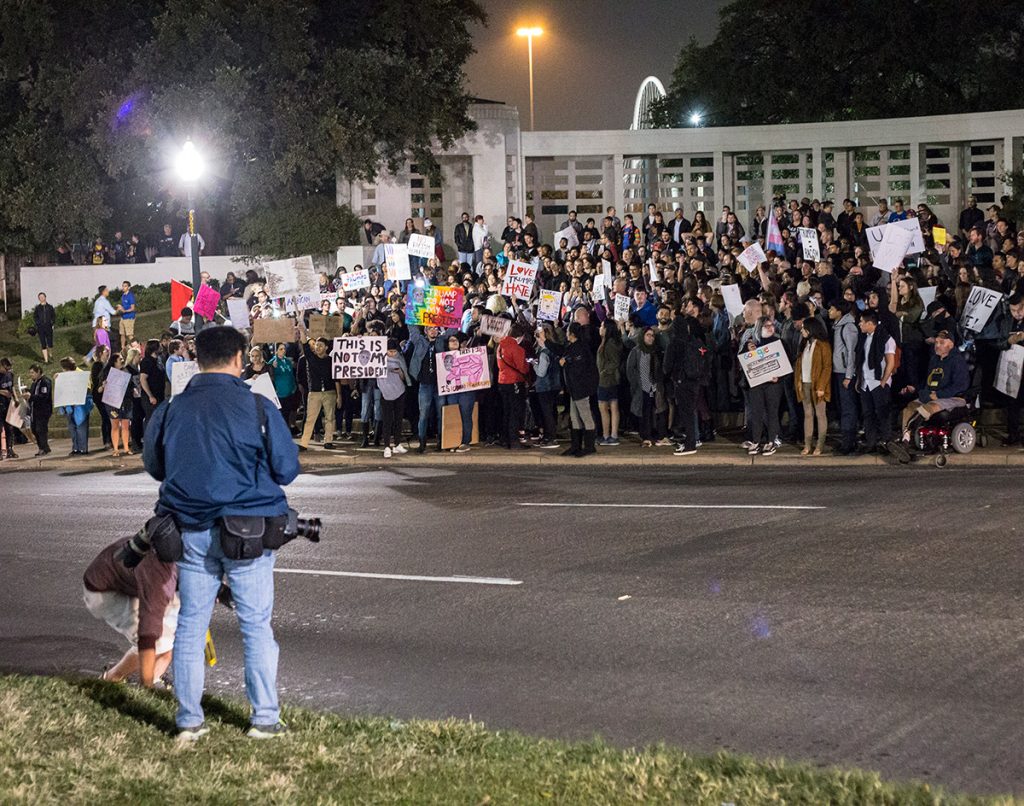 Meg Lazuli, one of the organizers of last night’s protest, said the event was not planned around any specific target or policy goal.

“We wanted to shine a light on all the organizations already established locally and to implore people to contribute however we can, and to support one another’s struggles,” Lazuli said.

One thing was clear: Those who came out last night to gather on the grassy knoll of Dealey Plaza and march through Downtown did so with a variety of causes on their minds. Most prominently, their signs advocated #BlackLivesMatter, women’s reproductive health rights and immigration reform.

Still, without a singular mission in place, we asked a few of the event’s participants to tell us more about why they were out last night. Here’s what they had to say. 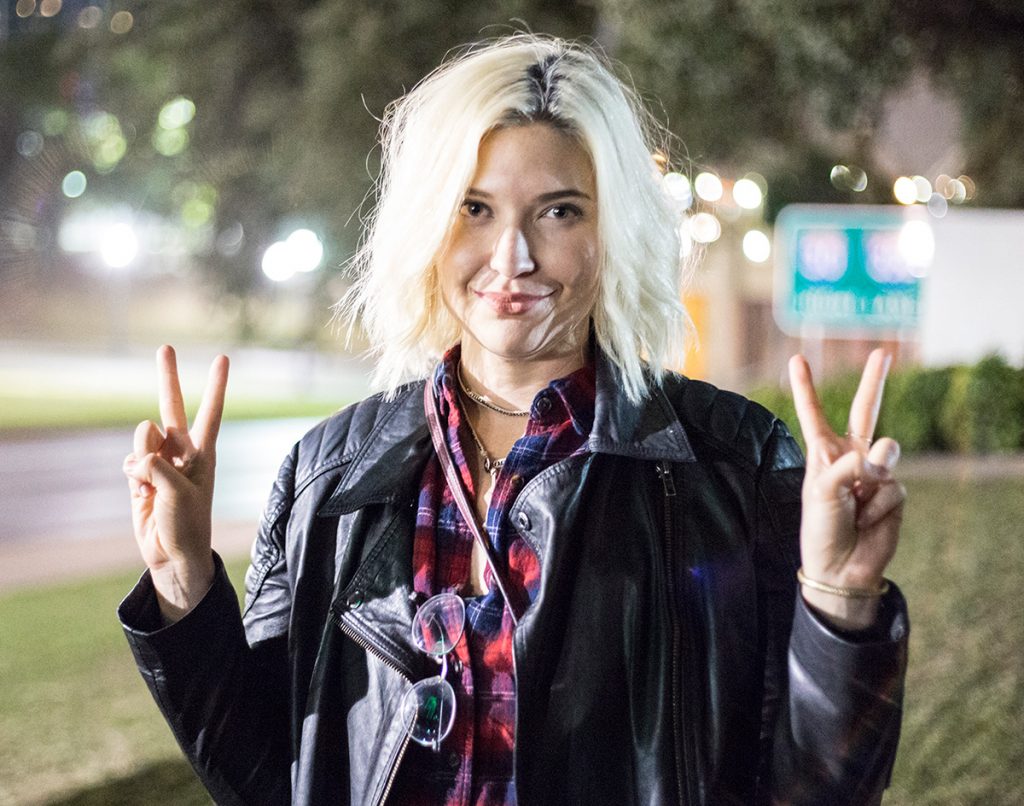 “I came out here tonight as a woman and as a sister of a gay American just to show my support to anybody who needed a hug, and just to let them know that we need to start local if we’re ever going to turn Texas blue. I don’t know about a goal for this event particularly, but I’m hoping they’re trying to accomplish a gathering of minds to try to put together the right movement to get things accomplished.” 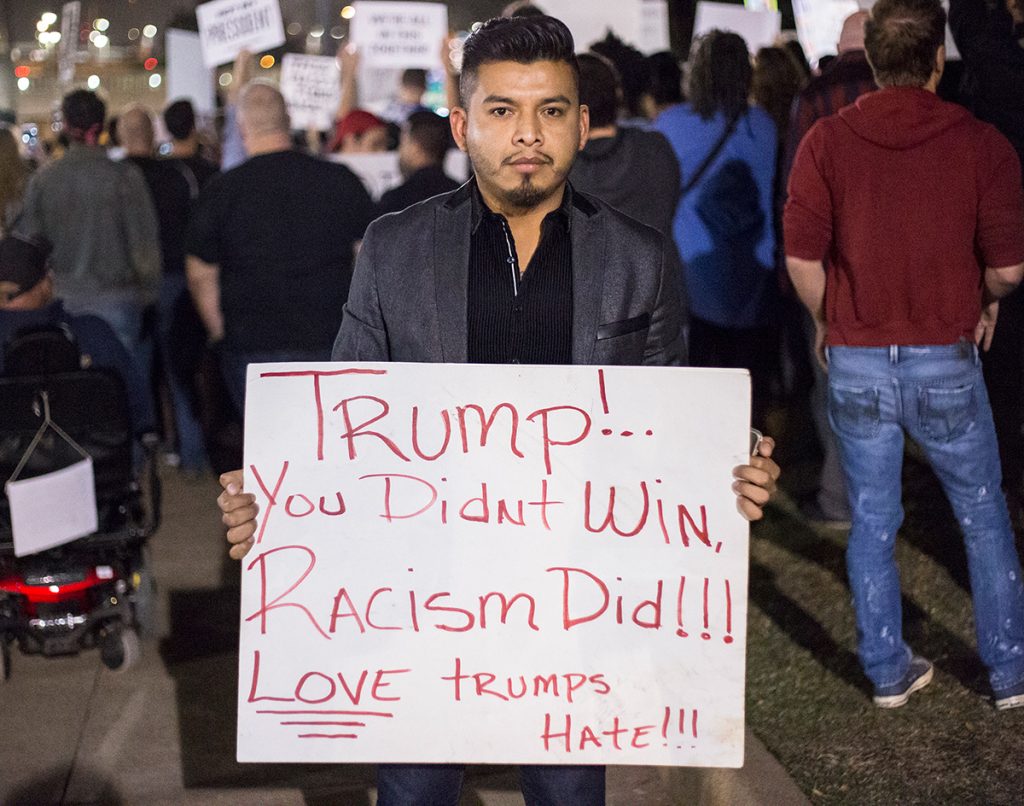 “Racism. I’ve experienced it first hand as a kid, as a young adult, and as an adult. I’m not here because I’m upset or mad that Trump won. I’m more concerned and afraid of what he’s incited and opened the flood gates to. That’s what I’m here for. I’m scared for my siblings. I’m scared for the younger generations. I don’t think that anybody is out here to overrule what’s already been established. I’ve already accepted the fact that he’s our president — but maybe now that he has to pass laws through will pay attention and see that we’re not happy or satisfied with what he stands for.” 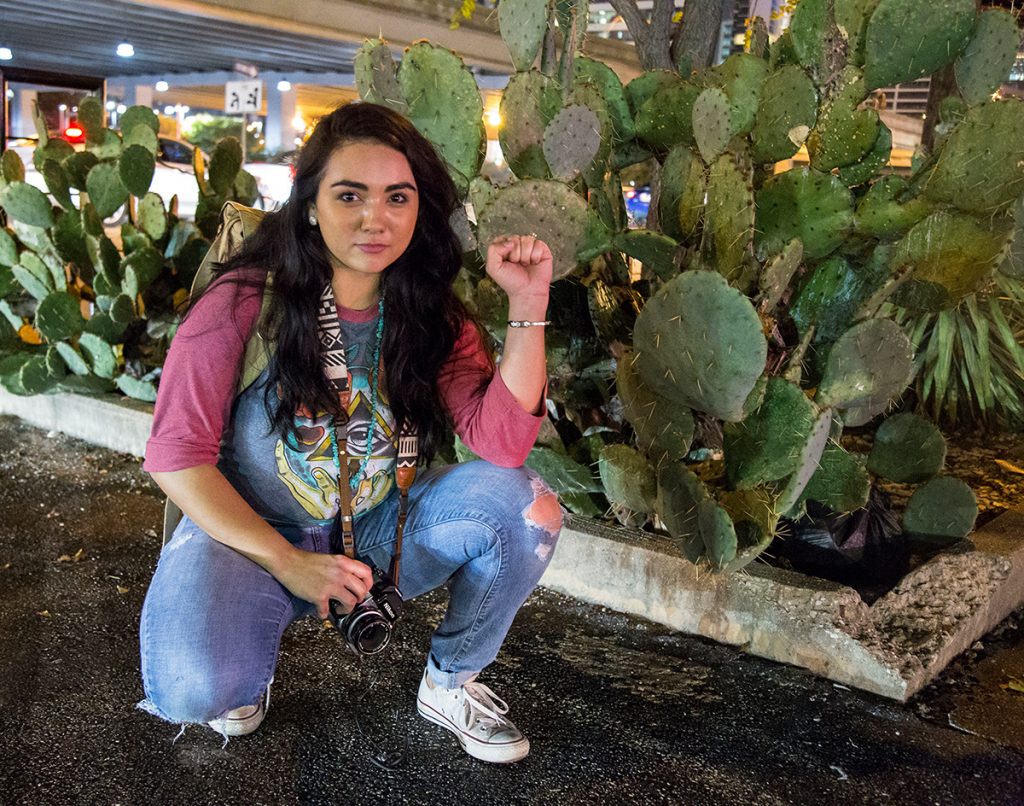 “I don’t believe in a world of hate, and this is where this [election] is leading us. I have a two-year-old and I want to teach him right, and I want him to be powerful. And to see him grow up with a leader like this asshole? It pisses me off to the core, and my motherly instinct kicks in. I do not want this for my son at all.”