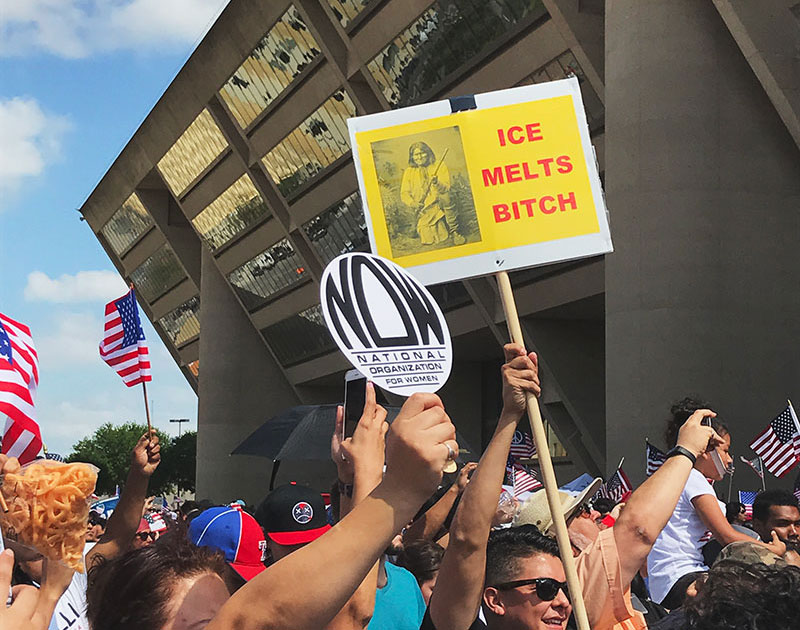 There Were Fewer Attendees Than Expected, But Thousands Still Showed Up To The 2017 Dallas Mega March, Which Felt Like A Distillation Of The Current Political Climate.

The wind blew through Martin Luther King III’s script. He struggled to keep his pages and message straight.

The moment was, in many ways, symbolic of the current state of the political left — a staple of American democracy still scrambling to organize after an election result it never thought possible. In fact, many activists and organizers questioned the overall point of Sunday’s 2017 Dallas Mega March, highlighting the fact that there currently isn’t any legislation for immigration reform at the national level.

But those people forgot one thing: hope.

The past few months have been a mixture of fear, uncertainty and restlessness for the estimated 475,000 undocumented Dallas residents. But, rather than sit back and being overwhelmed by these feelings, a number of these residents decided to spend their Sunday afternoon walking through the streets of Downtown — just as countless others have in recent months — to vent, to yell and to hope.

While listening to speaker after speaker, and bilingual speech after bilingual speech, those in attendance — be they immigrants, Muslims, members of the LGBT community or simply people yearning for some form of social equality — were able to clap and cheer and feel some sort of reassurance that there are others out there like them, also hoping for a better tomorrow.

As the march began proceeding down Ross Avenue at the Cathedral of Guadalupe, a group of less than a dozen began jumping into the crowds, blaring loud music from portables speakers, hoping to turn a calm march into a frenzy. Cooler heads prevailed, however, and march organizers were able to calm these unruly sets down.

Meanwhile, at the end of the procession, a small band of pro-Donald Trump protesters awaited the close to 3,200 protestors marching toward and gathering at City Hall — a significantly smaller figure than anticipated, but still an impressive one by the eye test.

The contrast of those fringe elements provided an image of how both sides appear to be approaching the 2018 midterm elections — one small band waiting and taunting at the finish line after a successful election, and the other attempting to corral its components to make a loud push at getting back as many seats as possible in Congress and state legislatures.

Let’s be clear: The Dallas mega march was never going to be the turning point that handed the White House or Congress back to the progressive movement in America. But, at least for an afternoon, it provided a sigh of relief for embattled Dallas residents in need of a journey with a real destination.