The Von Erichs’ Next Generation Returns To North Texas. 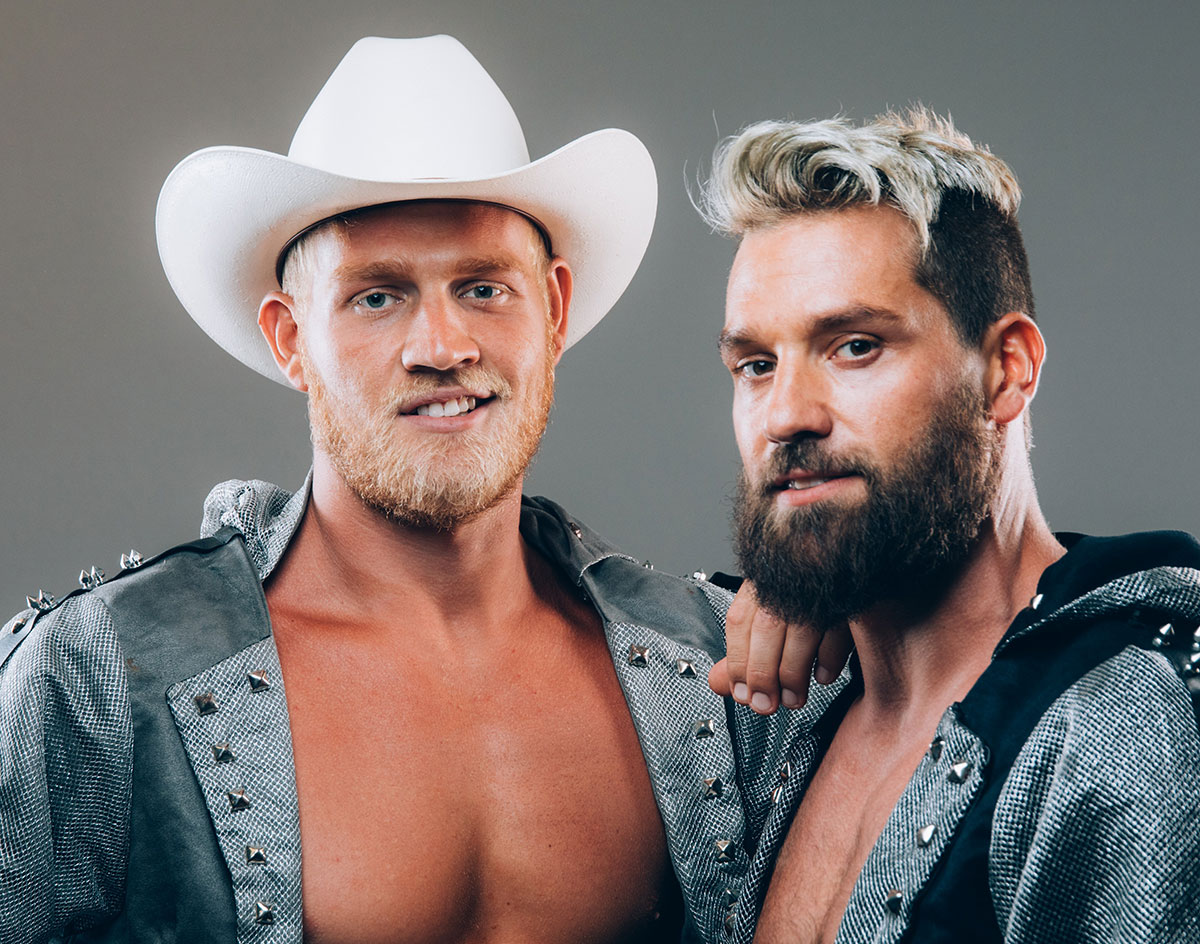 The Von Erich Brothers Discuss Their Upcoming Match In North Texas, Their Family Legacy And Their Excitement For The Future Of Professional Wrestling.

On September 7, Major League Wrestling (MLW) will make its Dallas-Fort Worth debut with its massive War Chamber promotion at the Nytex Sports Centre in North Richland Hills. But for two of the wrestlers headlining the affair, the night will serve as a homecoming beyond the battle that’s being billed.

Marshall and Ross Von Erich, members of the legendary Dallas-sprung Von Erich wrestling family, will participate in the night’s main-event bout — an eight-man showdown in which they’ll team up with fellow MLW stars “Filthy” Tom Lawlor and Low Ki to square off against the unruly CONTRA Unit stable of villains, which will welcome a temporary fourth member in Ikuro Kwon for the purposes of the fight.

The match should be pretty nuts, too: The ring will be contained by a steel cage crowned with barbed wire, and each team will send members into the fight one at a time all Royal Rumble-style, giving one side stretches of man-up advantages until the each faction’s entire rosters have been entered into the ring to duke things out in full-on mayhem.

For their part, the Von Erich boys are stoked.

“MLW coming to Dallas means so much to us,” Marshall Von Erich says when reached for a recent phone interview meant to preview the match. “Texas is special to us, and the Von Erichs are part of history in Texas.”

Adds Ross Von Erich: “We’ve also never been in a cage before, so this is something we’ve always wanted to do, and we’re extremely excited to do it.”

Something as formidable as a War Chamber match should create sufficient conditions for a uniquely violent spectacle. Even for MLW neophytes, the caged carnage should be entertaining — even without the full backstory behind it.

That said, a company doesn’t throw money at a steel cage structure, or sanction such a risky bout, unless there’s a context to demand it. And, for audience members who watch MLW’s show Fusion on beIN Sports or YouTube, this is an opportunity to see a crucial chapter in a bitter rivalry unfold live.

The truncated version of what’s going down is that the members of CONTRA Unit are inveterate rule-breakers who like to hurt people, whereas the Von Erichs are the sort of inherently noble grapplers who feel compelled to confront villains. The ideological clash was bound to lead to violence, and encounters between the two factions have grown increasingly vicious over the past few months. One recent twist in this escalating conflict saw the heel-ish CONTRA Unit blind Marshall with a mysterious red substance. The company’s official position in the wake of that stunt is that Marshall is not medically cleared for the bout, although he insists he’ll be at the show and in the match no matter what the front-office brass says.

“Nothing’s gonna get me out of the cage,” Marshall says, maintaining character throughout our call. “Blinded or fully sighted, I’ll be there.”

The wrestling business has mutated drastically from what it was during the heyday of the Von Erichs’ father and uncles. But the gist of what MLW is promoting could work in just about any era: These two groups hate each other; the bad guys took a loathsome shortcut to get an advantage over the good guys; and the only way to settle matters is to let them all find creative and captivating ways to brutalize each other for our enjoyment.

Ross and Marshall Von Erich know that. They’re the sons of Kevin Von Erich, the oldest of the Von Erich brothers who would become famous for plying their pulverizing trade across the Metroplex, particularly at regular shows in Dallas’ Sportatorium.

The Von Erich name became an indelible part of DFW history in the 1980s, during the peak years of World Class Championship Wrestling (WCCW), which was run by family patriarch Fritz Von Erich. Countless North Texans would turn out to watch the brothers in battle against peerless grapplers like Ric Flair and Harley Race, and their group rivalry with the Fabulous Freebirds is still one of wrestling’s most revered feuds.

The Von Erich brothers only recently joined MLW after years spent training and wrestling in Japan, and working for an array of different promotions, with news of their decision to join being announced back in May. They’re excited to be a part of the company’s first North Texas show, and glad for the opportunity to work with the MLW brand in general.

“The people [at MLW] are great,” Ross says. “The locker room’s great. We can’t really say enough good about it. We just feel like we’re meant to be there, and it’s all perfect timing. It’s one of the best rosters in wrestling… I think we’re doing a lot of new things, and we’re growing.”

Even if MLW continues to largely operate outside the Metroplex, it’s given Ross and Marshall familiarity in another sense, as the brothers are not the only wrestlers with family ties to professional wrestling. One of their CONTRA Unit foes, Jacob Fatu, is a member of the Anoa’i family, which also includes WWE stars Roman Reigns as well as Jimmy and Jey Uso, along with a formidable number of past wrestling legends, including Yokozuna, and the Wild Samoans. The company also boasts Hart family members Davey Boy Smith Jr. and Teddy Hart, who along with Brian Pillman, Jr. (son of wrestling legend Brian Pillman), now work together as the Hart Foundation (a faction name used by their relatives in the then-WWF in 1997).

The timing of the Von Erich brothers’ return to Dallas seems particularly fortuitous thanks to the recent debut of VICE’s Dark Side of the Ring series, which included an episode about the Von Erich family. Anyone with a passing knowledge of what the Von Erichs went through should have expected a difficult watch, and the producers were unafraid to delve into the stories of addiction, pain, and death that still hover, smog-like, around the family’s history.

What makes the episode worthwhile both for people new to the Von Erich story and those long familiar with it is the way it manages to push through the tragedy to tell the story that continued after so many fans counted the Von Erichs out. Kevin Von Erich had the opportunity to speak openly about carrying the burden of so many gutting moments, but he was also able to share how he’s been able to persevere and watch his sons continue the Von Erich legacy.

Says Ross: “We got really good feedback from the producers — they thought it did well. The feedback from some of the fans, saying they found it inspirational, helpful. It’s just overwhelming, y’know? The responses we’ve gotten from it. The story my dad had — all the death and the tragedies — people could relate to that. We’re just happy it could help some people, and we’re glad VICE gave us that platform to do that.”

Of course, MLW is still nowhere close to the size of WWE, which is poised to bring more of its content to cable TV and return soon to network television as part of a deal with Fox. The company is also comparably diminutive next to the recently formed AEW, which is set to start running its own wrestling program on TNT in October. While these developments might sound like trouble for a company looking to grow, MLW is still managing to extend its reach, securing collaborations with international wrestling companies, and airing its show in the United Kingdom, South Africa and Israel.

When the question of wrestling’s future, and recent moves among major companies, is brought up with the Von Erich brothers, they take an optimistic tone about growth at all levels of the wrestling business.

“I think people just [got] really used to what’s out there for so long,” Ross says. “Now, they’re looking elsewhere [at other promotions]. I think that’s great for indie wrestlers, and all wrestlers. It’s a great time to be in the business.”

It’s a pretty remarkable time to be a wrestling fan, too. World Class Championship Wrestling officially folded in 1990, and the Sportatorium was demolished in 2003. But here in 2019, Dallas has yet another chance to crowd around a squared circle and watch the Von Erich family in action.

The more things change, the more they stay the same.