Listen Up, Brother: It’s Time To Rebuild The Sportatorium. 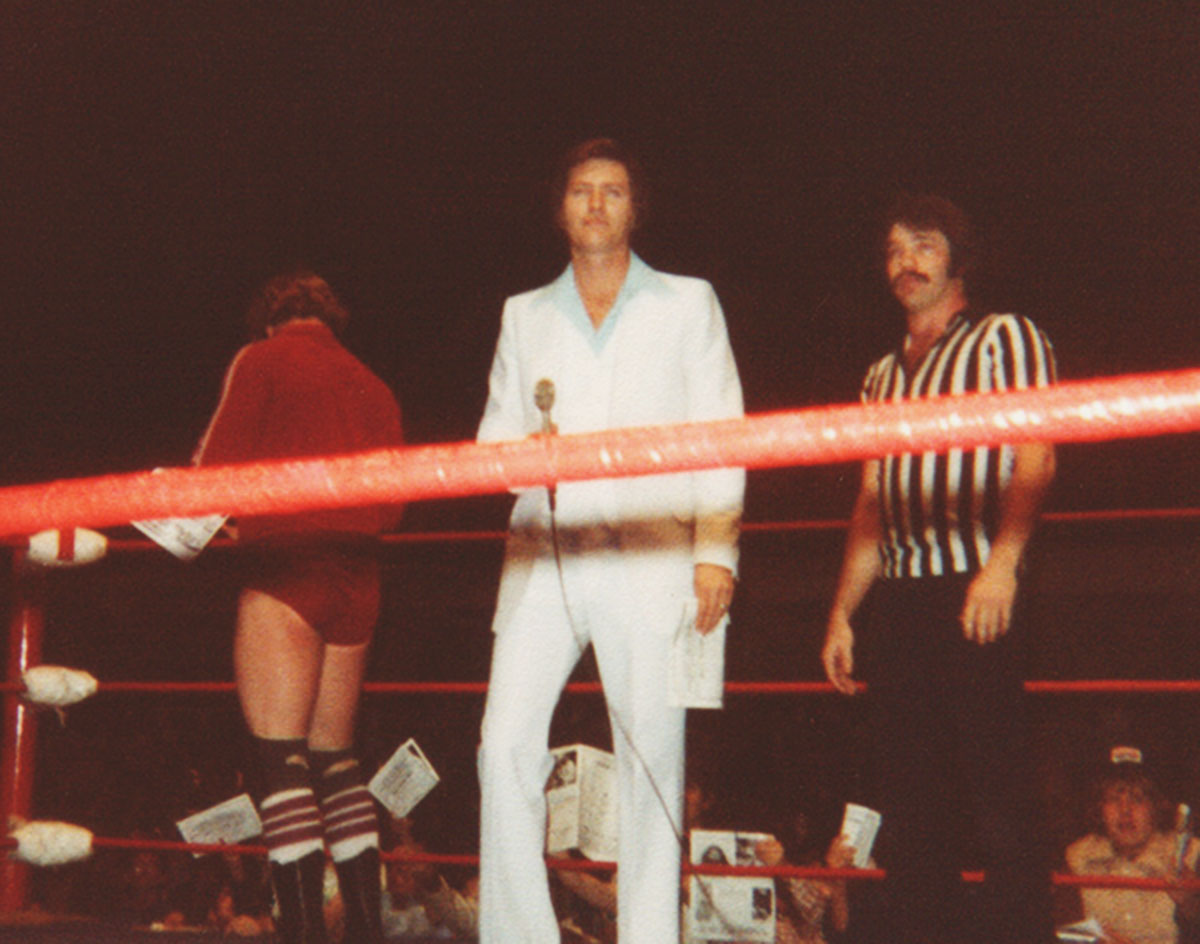 Three Major Wrestling Shows Are Coming To Dallas This Week, Proving That Now’s The Time To Bring Back The Venue That Established The City In Wrestling Lore.

Once upon a time, Dallas was home to the undisputed heavyweight champion of professional wrestling promotions.

Hey, we’re talking the sports entertainment business, where bold claims like that are commonplace no matter how dubious.

But in the case of the Dallas Sportatorium and the World Class Championship Wrestling promotion that held court there all through the ’80s, there’s some basis beyond a well-let-me-tell-ya-brother brand of puffery to back those boasts. For a time, the Fritz Von Erich-headed WCCW was the No. 1 pro wrestling promotion in the country in terms of television ratings and attendance. To wit, WWE’s Monday Night Raw is the best rated show on cable these days, pulling in a 0.8 rating for the week of June 10-16, but WCCW’s syndicated programming was regularly drawing 15 times these numbers in the early ’80s, aided in large part by fewer channels to choose from, sure, but still dwarfing similar promotions and even beating out Saturday Night Live from time to time.

As highlighted in an excellent recent episode of VICE’s The Darks Side of the Ring series, the Sportatorium’s rise and fall is largely tied to the success and subsequent tragedy surrounding the Von Erich wrestling family. For a time, the five Von Erich brothers and their father were more famous around these parts than Dallas Cowboys players, often having to run errands like shopping for groceries in the middle of the night to avoid being mobbed by adoring fans.

Even though he had some modest success in the then-WWF under the Texas Tornado name, it was in Dallas where the most-talented Von Erich brother Kerry had his best matches — like when he won the NWA Heavyweight Championship off of Ric Flair in front of 45,000 fans at Texas Stadium. It was a closely guarded secret at the time, but a missing foot was a big reason his best days were behind him by the time he left town.

The Von Erichs, of course, were far from the only talents that got over in that 4,500 cap octagonal room at the corner of Industrial and Cadiz. As he once boasted during a Raw segment, Stunning Steve Austin (later known as Stone Cold) got his start there. So, too, did Percy Pringle (aka the late Paul Bearer), Ric Flair, Jerry Lawler, Matt Borne (the original Doink the Clown), Texas Red (later known as The Undertaker), Skandor Akbar, The Fabulous Freebirds, Harley Race, Tully Blanchard, Kamala, Andre the Giant, Bam Bam Bigelow, Big John Studd, Chavo Guerro, Dingo Warrior (later the Ultimate Warrior), The Great Kabuki, Jeff Jarrett, Jim Cornette, Jimmy Snuka, King Kong Bundy, Terry Funk, Shawn Michaels and so many others that would go on to have success in WWF and elsewhere.

SEE ALSO: [QUIZ] Which Texas-Bred Attitude-Era WWE Star Are You?

Enough with this dwelling in the past crap, though. Our point is this: Dallas was once the GOAT, and it can be again. In fact, the time has never been more ripe to put a plan in action to get us there once.

Wrestling is more popular than ever in the area, as evidenced by the fact that three major shows are hitting town in the span of this week alone. WWE’s aforementioned Raw hits the American Airlines Center on Monday, July 1; New Japan Pro-Wrestling’s G1 CLIMAX29 kickoff goes down in the same building on July 6; and Impact Wrestling’s Slamiversary 2019 brings former WWE-ers like Rob Van Dam and Rich Swann to Gilley’s to grapple things out on July 7.

Dallas’ obvious appeal as a big-time wrestling destination for big touring promotions aside, there are myriad other reasons why we think this could work.

For starters, while the ‘E is as popular as always per its current ratings, the company’s also more vulnerable to competition than ever before. On top of the past year’s shoddy storytelling, upstart promotions All Elite Wrestling — headed up by the locally-tied Cody Rhodes — drew an estimated 98,000 pay-per-view buys for its inaugural Double or Nothing broadcast. (For comparison sake, WWE’s most recent own PPV, this month’s Stomping Grounds only did about 9,800 buys, representing the lowest in the current era.)

Folks are clearly clamoring for competition in wresting promotions these days, and we’d argue a Sportatorium 3.0-set promotion would be just the ticket for satisfying that hunger.

That’s not just our local bias getting in the way here, either. Nostalgia for the old Downtown Dallas wrestling arena remains high nationally as well, not only rearing its head in the form of that aforementioned VICE doc, but in the numerous WCCW matches frequently added to the WWE Network’s archives (subscription required), including the most recent trio of additions filmed at the Sportatorium in the ’50s featuring the likes of the Mad Dog Maurice Vachon, Wild Billy Curry and The Sheik.

What’s more, nothing was ever erected where the old Sportatorium once stood. At this very moment, it’s still just an empty field not far from Fuel City, where a new-look million-dollar Sportatorium would surely help anchor a long dormant Trinity River Project, if you ask us. We hazard a guess that if you built it, they would come. Remember, a total of 101,763 wrestling fans that showed up WrestleMania 33 at AT&T Stadium in 2016 — a record that still stands to this day. Other infrastructure elements that would help fill that barn are already in place, too. Mark Cuban’s AXS TV, which already buoys NJPW by airing a weekly television series for the overseas promotion, could broadcast shows from the arena.

All we’re saying is that the worldwide leader has never been more vulnerable, and there’s never been a more strategic time to gamble on a Sportatorium/WCCW resurrection than right now, in 2019.

We get that this is a long shot we’re pitching here. We know that there’s a reason why the two entities that tried running shows out of the Sportatorium in the post-WCCW ’90s failed magnificently. And we’re aware that there’s surely a better explanation beyond “uh, because no one has asked” as to why nothing has been built where that storied arena once stood in the two decades since its demolition.

We also understand that, the more momentum all these new upstart promotions get, the more likely it is that Vince McMahon rights the ship once more and squashes all the competition out there like he did back in the WWE Attitude Era. Knowing that, we for sure get how building a new Sportatorium would be a hard thing to throw tens of millions at.

But why not aim for the stars with our dreams?

Actually, now that we think of it, perhaps this is a better compromise: In lieu of erecting a dedicated pro wrestling barn, wouldn’t it be cool — and super easy — to just bring live wrestling back to the Cotton Bowl like they used to during the State Fair of Texas’ run from 1984 to 1988?

Our point here is simply, y’all. Whether it’s in a rebuilt Sportatorium or at the underused Cotton Bowl, it’s high time Dallas dipped its toes back into the pro wrestling game beyond just welcoming tour stops from the big guns.

It’s not an insane thing to say that this city’ history with the sport is simply too valuable to not even consider such an attempt.

And if you’re not down with that? Then, I’ve got two words for ya.