The Spread: Community Beer Co. Gets A New Home. 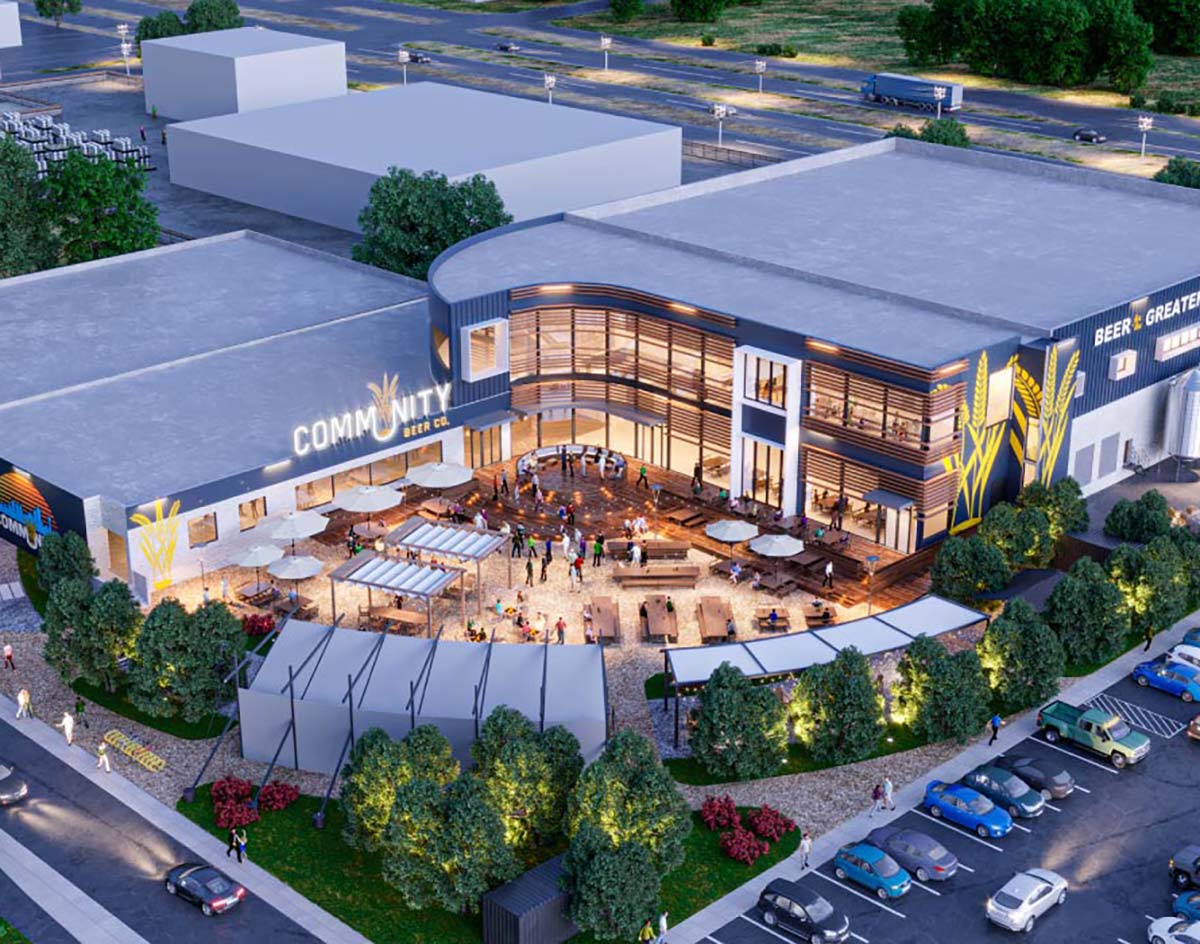 Plus: Deep Ellum Is Getting An Affordable Steakhouse, Ellen’s Continues Growing Across The Region, LeBron James’ Pizza Chain Expands Its Area Footprint And More!

This week’s food news roundup hypes up the return of live music some, as a few new North Texas restaurants are creating their own venue spaces.

As we all know, it’s been a difficult year for North Texas musicians and active concert-goers, who have had to transition from live concerts to virtual shows during the still-ongoing pandemic. While live music still isn’t completely back to normal, more and more musicians have been hitting the stage with live audiences for the past few weeks — and they’ll soon have more potential booking opportunities.

Last week, to that end, Community Beer Co. announced that its brewing facility and taproom will relocate and expand to a much larger location this fall — a move that’s been in the works for almost five years now. The new space, located at 3110 Commonwealth Design Drive and just a little ways up the road from its current Design District home, will feature a two-story taproom, an outdoor biergarten, multiple event spaces, a full-service restaurant and a live music venue. It’s worth mentioning too that the first floor of the taproom will distill over 40 Community beers, hard seltzers, wine and spirits, and that the second floor will offer seating that will overlook the biergarten and stage. There’s not a lot of detail about live music yet, but the facility’s outdoor amphitheater is certainly a nudge at live music making a comeback soon.

Before we get more into that marriage of music and food, let’s talk first about some new Texas drinks that just hit the grocery shelves: Lone Star Seltzer and Dr Pepper Zero Sugar. As the Dallas Morning News reports, just weeks after Topo Chico Hard Seltzer made its debut, Lone Star Brewing has released its own 100-calorie hard seltzer in two flavors. The Agave Lime, a tangy citrus seltzer inspired by the flavor of Texas’ popular ranch water tequila cocktail, will accompany an Agave Watermelon in six-pack, 12-ounce cans at Tom Thumb and Total Wine locations. In addition, for all you Dr Pepper worshippers out there, the zero-calorie Dr Pepper Zero Sugar earned its released last month in original, cherry and cream soda flavors. To be clear, though: It’s not replacing Diet Dr Pepper.

Now back to music-related food news in Deep Ellum!

A new casual steakhouse coming to Deep Ellum this summer will have not one, but two stages for live music. The Free Man owner John Jay Myers, retired Free Man investor Ed Laster and longtime Dallas service industry and music scene fixture Jeff Biehler (most recently the general manager at the now-closed The Foundry) are the team behind the lamented Char Bar-inspired new spot called Cheapsteaks. Taking a little bit from Free Man and The Foundry, Cheapsteaks will have an indoor stage featuring jazz standards and lounge singers, and second stage in the patio for booking rock shows. While a menu isn’t set in stone, the DMN reports that Cheapsteaks will serve high0-quality and modestly priced steaks on Elm Street where Stonedeck Pizza once stood

In the same neighborhood, a Phoenix-based wine bar is also set to open soon. As Eater reports, the new spot — called Postino — will also pay homage to the area’s renowned concert venues in the form of concert posters and ticket stubs from past and present music venues lining the walls. The brand’s first North Texas location is set to debut in a shared building space with Merit Coffee on Main Street starting April 19. The wine bar’s locations are typically housed in historic buildings with décor that represent its surrounding neighborhoods, which explains the decor choice. As far as its menu goes, Postino is bringing its popular $25 board-and-a-bottle deal — four pieces of bruschetta and a bottle of wine — plus charcuterie boards, brunch options and 12 different types of that aforementioned bruschetta. Meanwhile, it drink menu includes 40 different bottles of wine, 30 wines available by glass and Dallas craft beers.

While the music scene isn’t completely back to normal, the Dallas food scene is manifesting a sweet return it seems!

And that does it for Side A, so let’s now flip to Side B.

Every weekend through the end of April, Dallas’ Forest District neighborhood will provide a space for the MLK Food Park, a new food truck park and community market from the Better Block Foundation. As Eater reports, Better Block worked with The Real Estate Council to transform a vacant lot at Martin Luther King Jr. Boulevard and Holmes Street into a park with vendors and art in an effort to help revitalize the Forest District. Each weekend will feature a rotation of business, including Smith Spot BBQ, Soulgood Texas Vegan, Bri’s Bakes and Seaux Tasty Creole Fusion until May 2.

The Rustic owner Kyle Noonan, meanwhile, has plans to open a new Tex-Mex spot Joe Leo — named after his grandfather — next month. Its opening-day party will take place at its location on Fitzhugh Avenue on May 5, but will begin selling deliver-only meals via DoorDash every day starting April 19 from 4 to 8 p.m., according to the DMN. Expect Tex-Mex favorites ranging from fajitas and gueso to nachos and margaritas.

Back in Deep Ellum, two new side-by-side restaurant-bars will open April 15 in the former Sherman Williams paint shop space. Both The Sporting Club and Blüm will be housed in the same building as an open concept with an outdoor space, but different themes. Per CultureMap, the vintage-themed The Sporting Club will focus on sporting events and serve large cocktails, while botanica-style Blüm will be a Vegas-style day-and-night club serving an Italian-Southern fusion menu.

Meanwhile, another two-in-one comes from the new La Madeleine French Bakery & Café and Walmart partnership coming to DFW. As CraveDFW notes, a new La Madeleine Express prototype by the Dallas-based French restaurant will offer a grab-and-go menu and dine-in inside 10 test Walmart locations around the region, starting this summer. The first one will open in Garland in July and will feature new pizzas created specifically for these Walmart locations, plus La Madeleine’s chicken Caesar salad and tomato basil soup. Hey, we’re all for replacing all the Subways!

Also expanding its North Texas reach these days is the West End-sprung comfort food destination, Ellen’s. As the DMN reports, the company will open four more locations around the region — in addition to the Allen location it’s already added. The new locations will come in Frisco, in Fort Worth’s Near Southside neighborhood, in Snooze‘s never-opened property in the East Dallas neighborhood of Casa Linda and, perhaps most notably, in the old Crossroads Diner location in Far North Dallas. All four new locations are set to be up and running by the end of 2021.

Meanwhile, LeBron James‘ fast-casual pizza concept Blaze Pizza, which promised up to 20 area locations upon entering the market in 2018, is finally making good on its word. In addition to current locations — one apiece at the moment in Arlington, Fort Worth, Frisco, Grand Prairie, Rowlett (just opened in March) and The Colony — the chain announced three new locations this week coming to Dallas, Irving and Mesquite.

As we’ve learned in recent weeks with Salt Bae‘s Nusr-Et Steakhouse‘s opening in Dallas, this city sure loves celebrity-approved eateries — a fact lampooned on the recent Saturday Night Live episode during which local hero St. Vincent served as the musical guest. Hit play on the below embed for a solid laugh.

Lastly, some good news to end these notes on: After shutting down due to the pandemic last year, Downtown Dallas’ acclaimed Dakota’s Steakhouse is getting a second lease on life thanks to new ownership. As Eater notes, the uniquely below-ground set spot is set to re-open this summer.