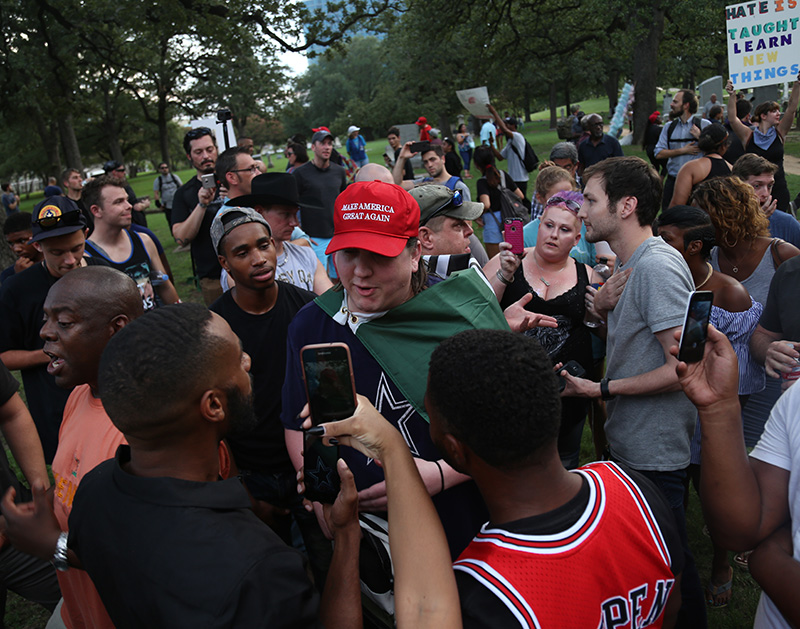 Month By Month, Let’s Look Back At The Egregious Acts Of Racism That Made Our Blood Boil And Earned Headlines In The Dallas Area Throughout 2017.

Racism — as it always does — reared its ugly head in 2017 just as in years past.

But, this year, it came with a special bravado as white supremacists were emboldened by the fact that The President of the United States seemed to both embrace their ideals — or at least not openly disavow them.

In fact, just a month ago, the FBI reported that there was an increase in reported hate crimes at the end of 2016, a trend that seems to have continued well into 2017. And that rise came to Dallas this year, like when white supremacists rallied around the Robert E. Lee statue at Oak Lawn Park after the city council’s unanimous vote.

But that was a public and open expression of racism. Not everything that made it onto this month-by-month look back on the racist incidents that Dallas faced this year was so out in the open. Others range from secret postings in public spaces to neighbors just quietly being racist dicks.

None of this can be construed as good news, but here’s something that indicates how things are now even worse: Unlike last year’s version of this list, we weren’t able to skip any months this time around. Meaning? We saw headlines detailed local acts of racism in each and every month of 2017.

Also like last year, we’d like to make the distinction between racism and prejudice before we dive into this list. As we all know, racism is a belief that one racial group is somehow superior to another, and how that belief is often used to oppress groups of people. Prejudice, meanwhile, is a pre-judgement of certain subsets of people (e.g. all cops shoot people of color; women can’t drive), and while prejudice can indeed be born from racism, it’s not necessarily racially motivated. To be clear, this rundown exclusively details the racially charged incidents that made headlines this year — and only those. We’re well aware of the fact that not every act of racism makes the news.