A List Of Hate Groups Still Currently Operating In Dallas-Fort Worth. 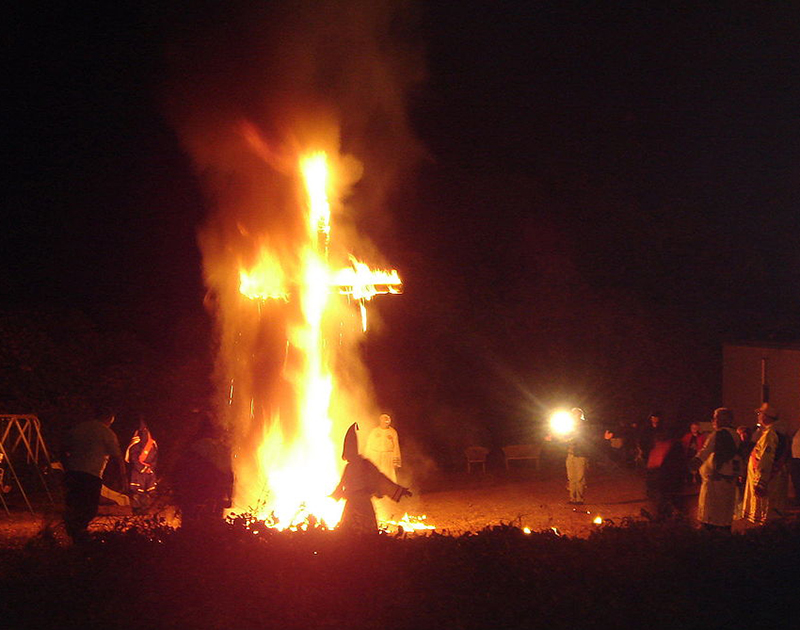 Dallas Once Had A Highly Active And Open Ku Klux Klan Presence. But Just Because It’s No Longer So Public Doesn’t Mean Dallas Lacks Hate.

Imagine men in white pointy hoods going to the State Fair of Texas on a day specially designated as Ku Klux Klan Day. It was actually the reality back in Dallas in the 1920s, when one out of every three eligible men in Dallas was an active member of the Klan.

But just because Dallas no longer hosts a day in which KKK members could celebrate their bigotry in public doesn’t mean the hate disappeared. Not at all, actually.

Just this past weekend, photographer Mark Kaplan was walking the streets of Deep Ellum when he snapped a picture of the below sticker, which bears an image that appears to have stemmed from the neo-Nazi website bloodandsoil.org.

Indeed, despite many efforts made to the contrary, bigotry and hate indeed still persists in modern America. And thanks to the Southern Poverty Law Center’s interactive hate group map, we now know exactly what hate groups are continuing to operate these days in Dallas.

While opinions vary on what actually constitutes a discriminatory attitude, the SPLC has specific criteria a group must meet in order to be designated a hate group. The SPLC defines a hate group as an organization that has “beliefs or practices that attack or malign an entire class of people, typically for their immutable characteristics.”

Texas held the title for most active hate groups with 84 in 2015, although the latest update to the map shows that the number dropped to 55 in 2016. California currently tops the country with 79 active hate groups.

Still, because it’s important to be aware of the world that surrounds you, we’ve used SPLC’s map to compile a list of hate groups that are still operating these days in and around Dallas.

It’s perhaps important to keep in mind, though, that these are just the organized groups. In today’s age, a person can just as easily be radicalized by hate spewed in online forums as they can in face-to-face meet-ups.

Israel United in Christ. This organization is considered a black separatist group with anti-Semitic and homophobic religious beliefs by the SPLC, and it currently has groups working out of Austin, San Antonio, Corpus Christi and Houston. Last year, Gerald Duane Lewis, who claimed membership with the Israel United group was charged with shooting a transgender woman in Indiana, but was ultimately ruled as being incompetent to stand trial.

Bureau on American Islamic Relations. This deceitfully named group operates out of Irving and caused a stir last year when it held an armed protest outside of a Nation of Islam mosque in south Dallas. During that effort the group faced a counter-protest from the Huey P. Newton Gun Club, an affiliate of the New Black Panther Party, although no incidents were reported over that confrontation.

New Black Panther Party. This most recent iteration of the Black Panther Party formed right here in Dallas in the late ’80s. Despite its somewhat militant appearance and extremist views, even they shunned Micah Johnson, who would go on to ambush Dallas police last summer.

Nation of Islam. The Nation of Islam was formed in the 1930s, making it one of the oldest groups in the country. It is designated a hate group because of its beliefs in black supremacy and its anti-Semitic and homophobic stances. A local Nation of Islam leader caused a massive controversy a few years ago after organizing a months-long protest of a south Dallas convenience store. Jefferey Muhammad accused a Korean storeowner of having murdered a man who stole cash from the store, although it was later proven that the owner killed the man in self defense.

Stedfast Baptist Church. This church’s pastor, Donnie Romero, caused an uproar and faced protests against his fundamentalist Baptist church when he praised the shooting at Pulse Nightclub in Orlando, which left 49 people dead. Romero referred to the victims of that attack as “scum” and said that Orlando was “a little bit safer” after it.

Loyal White Knights of the Ku Klux Klan. The white hoods need no introduction. This group operating in Fort Worth is an off-shoot of one of the oldest hate groups in the nation, but it still adheres to its two core principles of white supremacy and white nationalism. If, for some reason, you need more backstory on this group, the SPLC provides this handy list of lingo used by klansmen.

ACT for America. ACT for America organized a nationwide anti-Sharia law protest in about 20 cities back in June. The group has had access to The White House since Donald Trump’s election and expressly forbids interfaith dialogue with Muslim groups.

Probe Ministries. The Plano-based non-profit was added to the SPLC’s list back in 2015, much to the distaste of its leader, Kerby Anderson. Why was the group added? Because it collaborates closely with Living Hope Ministries, a group that offers “gay conversion” therapy.