The Future Of Transportation In Dallas. 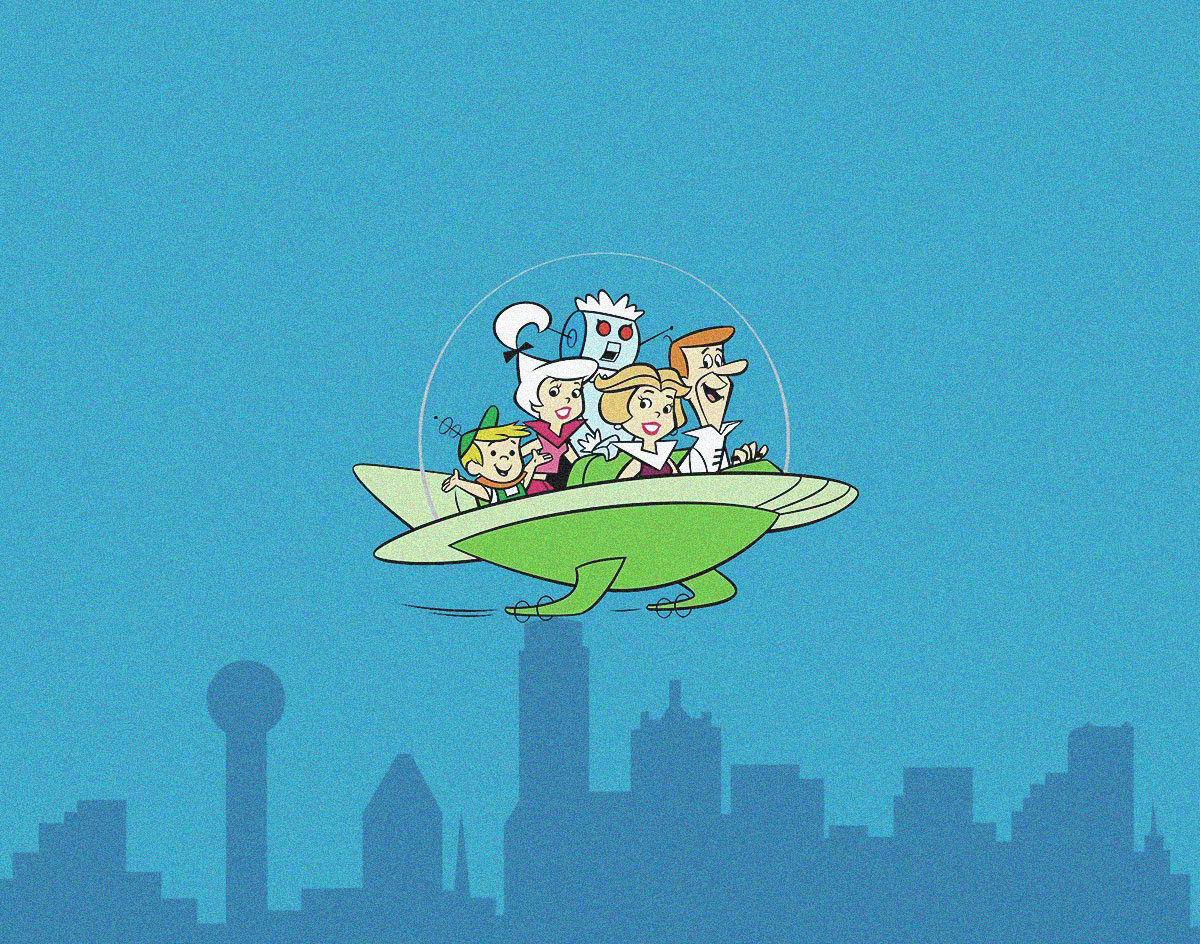 Forget Scooters: In The Next Decade Or So, Dallas Could Very Well Boast All Sorts Of Futuristic Modes Of Transportation — From Flying Cars To Bullet Trains.

As the Dallas and its surrounding region continues to grow at a rapid rate, it’s becoming increasingly crucial that its citizens have transportation options beyond just “Get your own damn car — fuck you!”

In the last decade, we’ve seen some of this already starting to take shape, what with the continued expansion of DART’s light rail system. Of course, perhaps the most dramatic game-changer in Dallas transit (and, frankly, American transit at large) has come via the mainstreaming and integration of private ride-sharing companies such as Uber and Lyft — and not just in the forms of app-assisted car rides, either. We can also thank Uber and Lyft for area developments like those specially-designated rideshare zones in Deep Ellum and, lest we forget, those fucking scooters that reside on every corner in the city.

More than just highlighting the need for more transportation options in Dallas, all of this recent progress in area transit is just the tip of the impending iceberg. In the next 10 years or so, shit’s gonna get really crazy around here.

At the onset of the 2020s, several futuristic modes of transportation have set Dallas in their sights as proving grounds — some that are already being tested for impending implementation, and others that are still being debated (or covered in legal red-tape).

Here, we’ve decided to take a look at all of the potential new transportation options that could shape how we get around Dallas (and also just Texas in general) in the very near future.

In 2017, Texas officially declared self-driving cars legal throughout the state — and, since then, we’ve already seen multiple companies jump on this opportunity in North Texas. Of course, the biggest player is Uber, which is currently developing its fancy new headquarters in Deep Ellum. At the company’s showy groundbreaking event at its new digs, CEO Dara Khosrowshahi said that Dallas can expect driver-less Uber rides to arrive “soon.” To that end, the company has already started mapping area roads over the past couple months, hoping to familiarize its autonomous autos with our street grid. But, it should be said, self-driving cars already have existed in North Texas to date — albeit in a limited fashion. The start-up Drive.ai rolled out the first self-driving car service in Texas in Frisco in July 2018, but with a fairly narrow scope: Its cars only went from the Hall Park office building to certain shops and restaurants in the immediate area. That year-long program received 5,000 individual riders and avoided any safety issues along the way, but Frisco officials eventually considered it too expensive to continue footing the bill after the test year was up. Since then, Drive.ai has moved on from Frisco to Arlington and expanded its reach, offering one stop at the CenterPoint office building and other stops covering the entertainment district (including AT&T Stadium and Globe Life Park). Things seems to be working out for that brand, too. Well, to a degree: Apple bought them in the nick of time before it was to file for bankruptcy.

Originally announced all the way back in 2007, and then fully green-lit in 2016, DART’s new D2 subway line will connect Victory Park and Deep Ellum. Currently, plans call for it to be finished by 2024, although construction doesn’t seem to have started on this front just yet. Oh, well! Hopefully, good things come to those who wait. With three underground stations, maybe the D2 will bring some New York City subway-caliber buskers along with it. It should be noted, too, that additional above-ground DART rails are also en route: Construction began September 19th on the Silver Line, which would link the rest of the rail system to the University of Texas at Dallas, which currently only boasts bus service. A more direct connection between UT-Dallas and its city namesake could open the door for further collaboration between the two.

That’s right, flying cars! Well, flying taxis, anyway. Uber’s initial plan was to roll out its Uber Elevates machines to Dallas by 2020, but now their current goal is to start test flights next year and finally begin commercial flights in 2023. The Dallas architect BOKA Powell and design firm Gensler has revealed the planned designs of the “skyports” that will serve as their docking stations, which come complete with landing pads for the “air taxis,” plus charging stations for electric bikes and scooters. Gensler co-CEO Diane Hoskins said Uber is creating “an aerial rideshare experience accessible to everyone where they live, work and play.” Everyone, huh? That might depend on how much these services will cost, which hasn’t been announced yet. So, we’ll see!

Moving on from transportation developments that are currently in the works to those that might take a while to be confirmed (if they happen at all) let’s talk about some super-fast transportation that could be heading our way soon. For years now, Virgin has been eyeing North Texas as one of the main test sites for its proposed Hyperloop series of tubes that would transport riders around the state at speeds of up to 670 miles per hour. That could get you from North Texas to Austin in 17 minutes — or just about the time it currently takes to get from Lovers Lane to the Pearl/Arts District station on DART. Virgin recently brought its XP-1 pod, the vehicle Hyperloop passengers would ride in, to AT&T Stadium this past August in an attempt to entice local politicians and investors to buy into the concept. Convincing is indeed in order: If Virgin wants to get the full Hyperloop built, it would need to build a large certification facility in the area to build and test the loop, and lots of time after that. If North Texas gets that contract, Virgin says it could build a mile of tube by 2021, and nine miles by 2023. (For reference, Dallas and Austin are 195 miles apart.)

While decidedly tortoise-like compared to the Hyperloop, bullet trains are still hares compared to most other modes of transportation. Using Japanese Shinkansen trains that can reach over 200 miles an hour, these long-discussed additions to Texas’ transportation portfolio could take riders from Dallas to Houston in under 90 minutes. Also? Unlike the hyperloop, the bullet train actually has been successfully implemented elsewhere already — no, not in the United States, but in Asian and European countries — so it should, in theory, be an easier sell to federal government agencies. If Texas Central, the company behind the $12 billion proposed line between Dallas and Houston, says it would need five or six years to build its system’s stations and tracks. Should it strike a deal with the Federal Railroad Administration soon, we could be riding these bullets into Houston as soon as 2025.