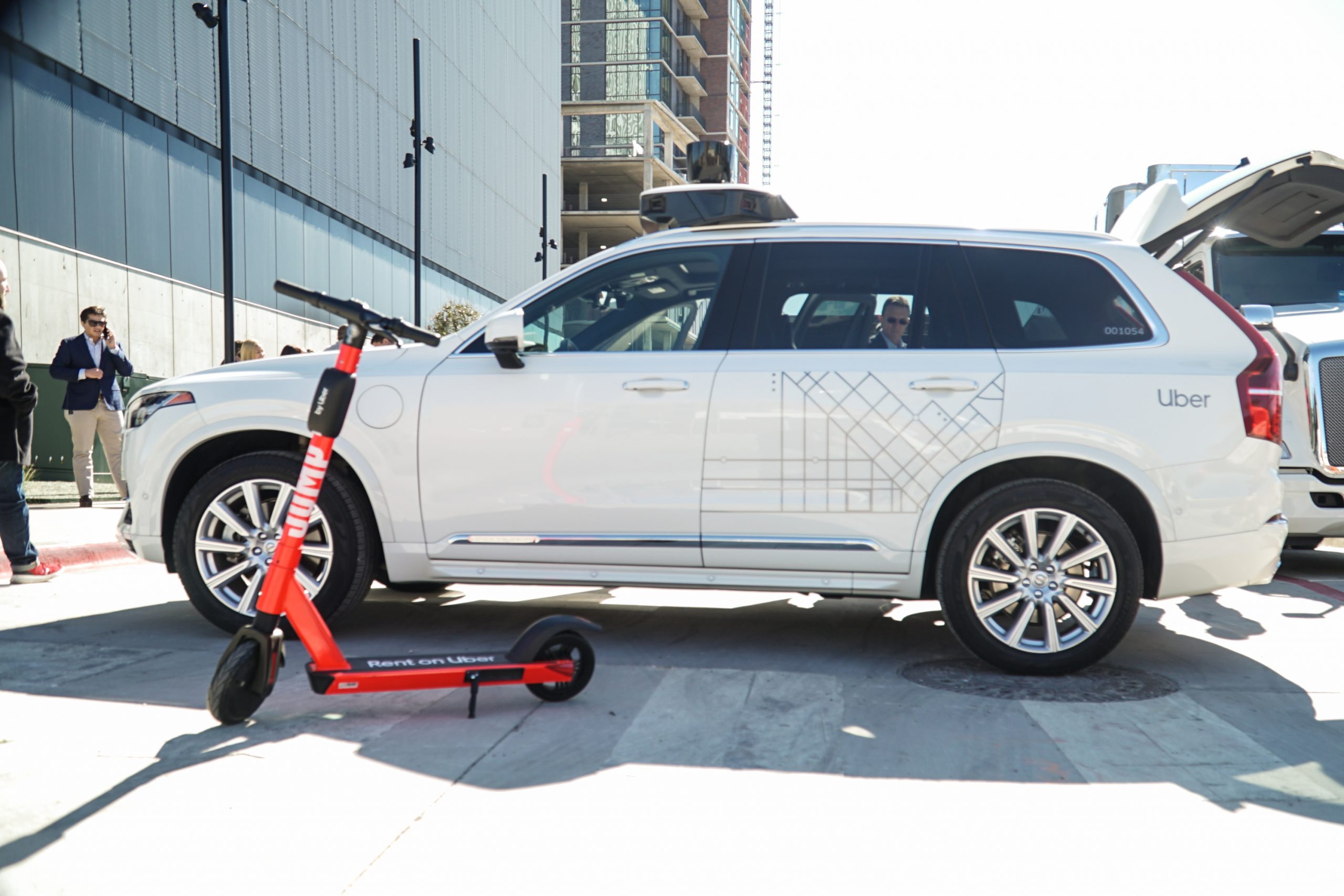 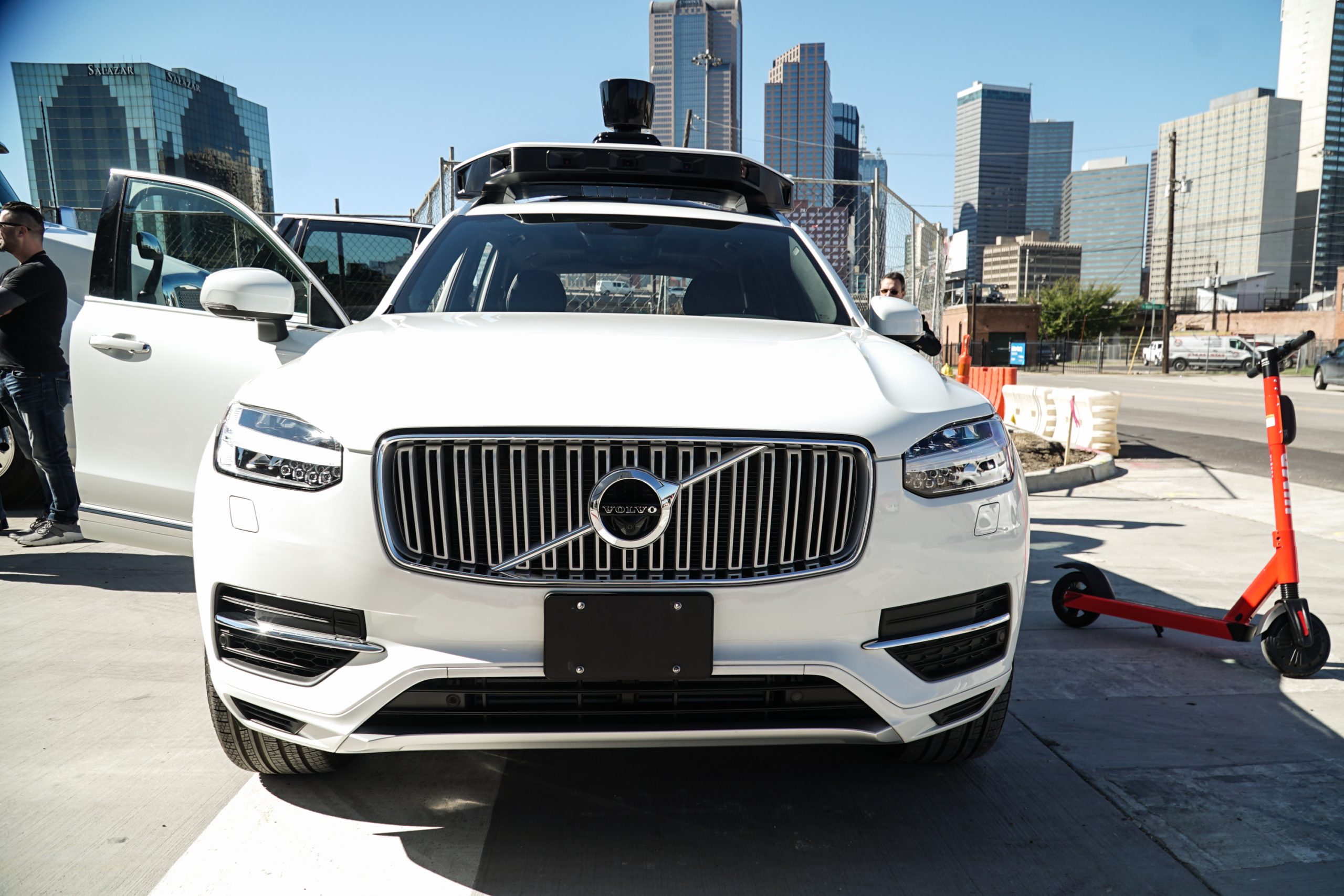 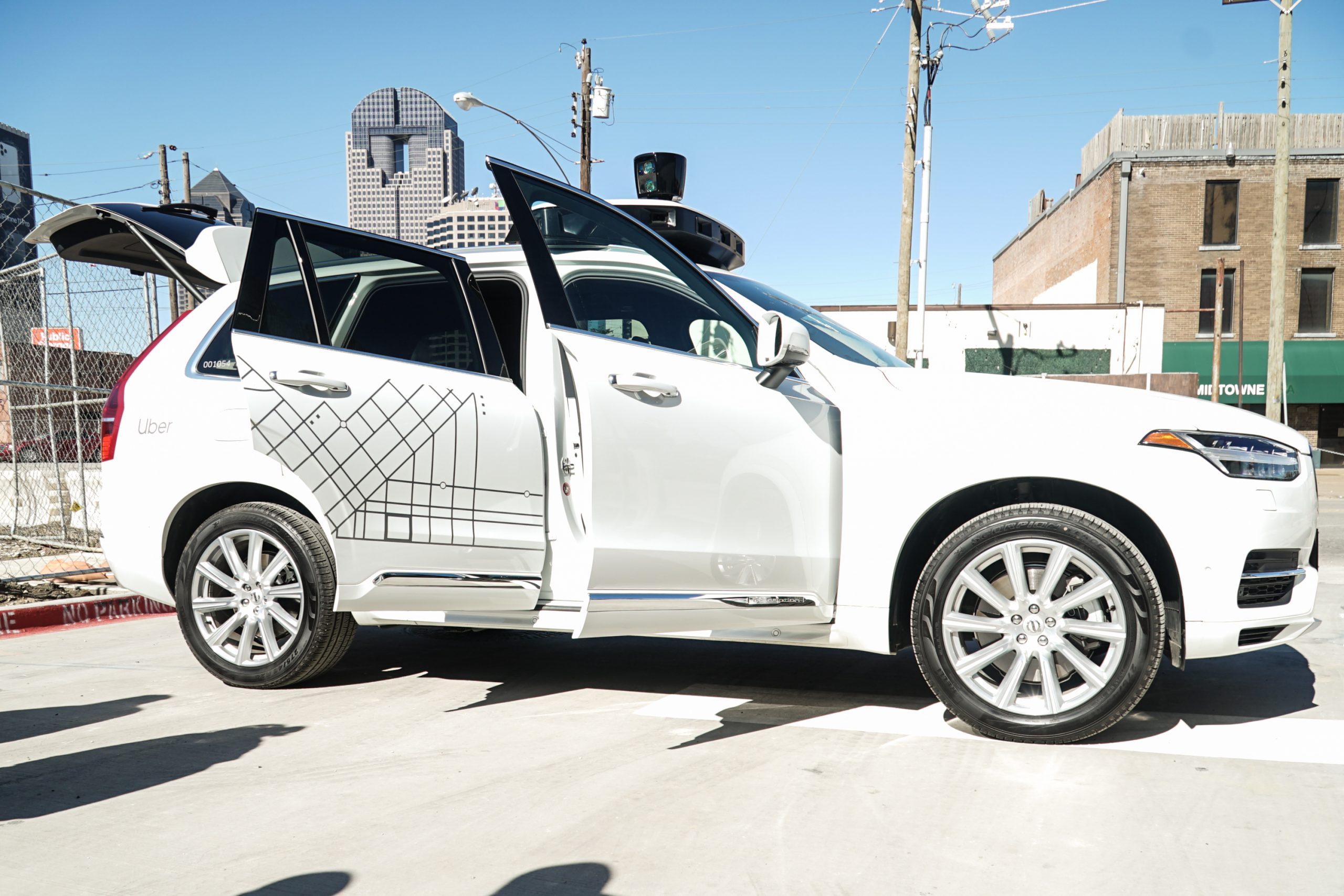 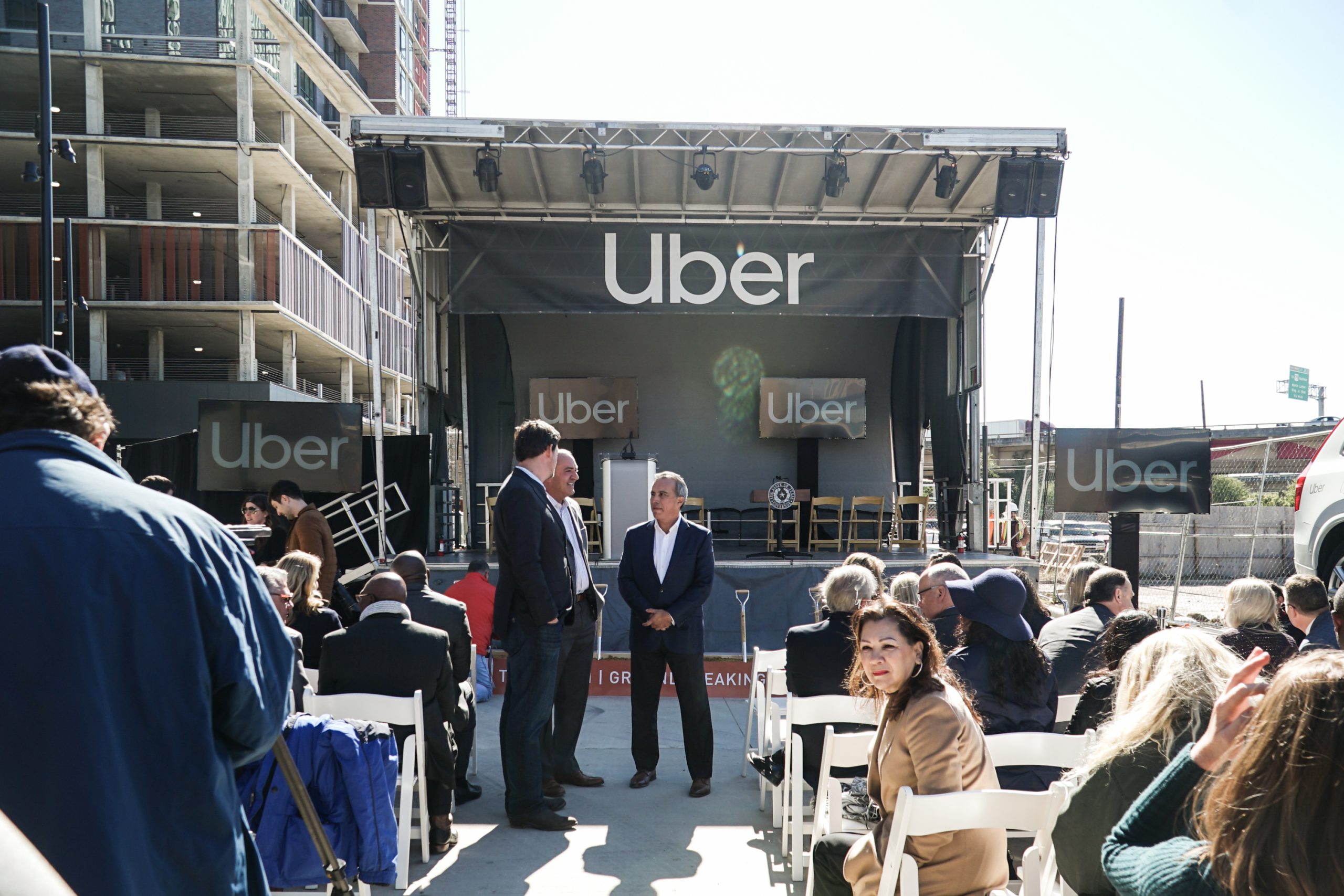 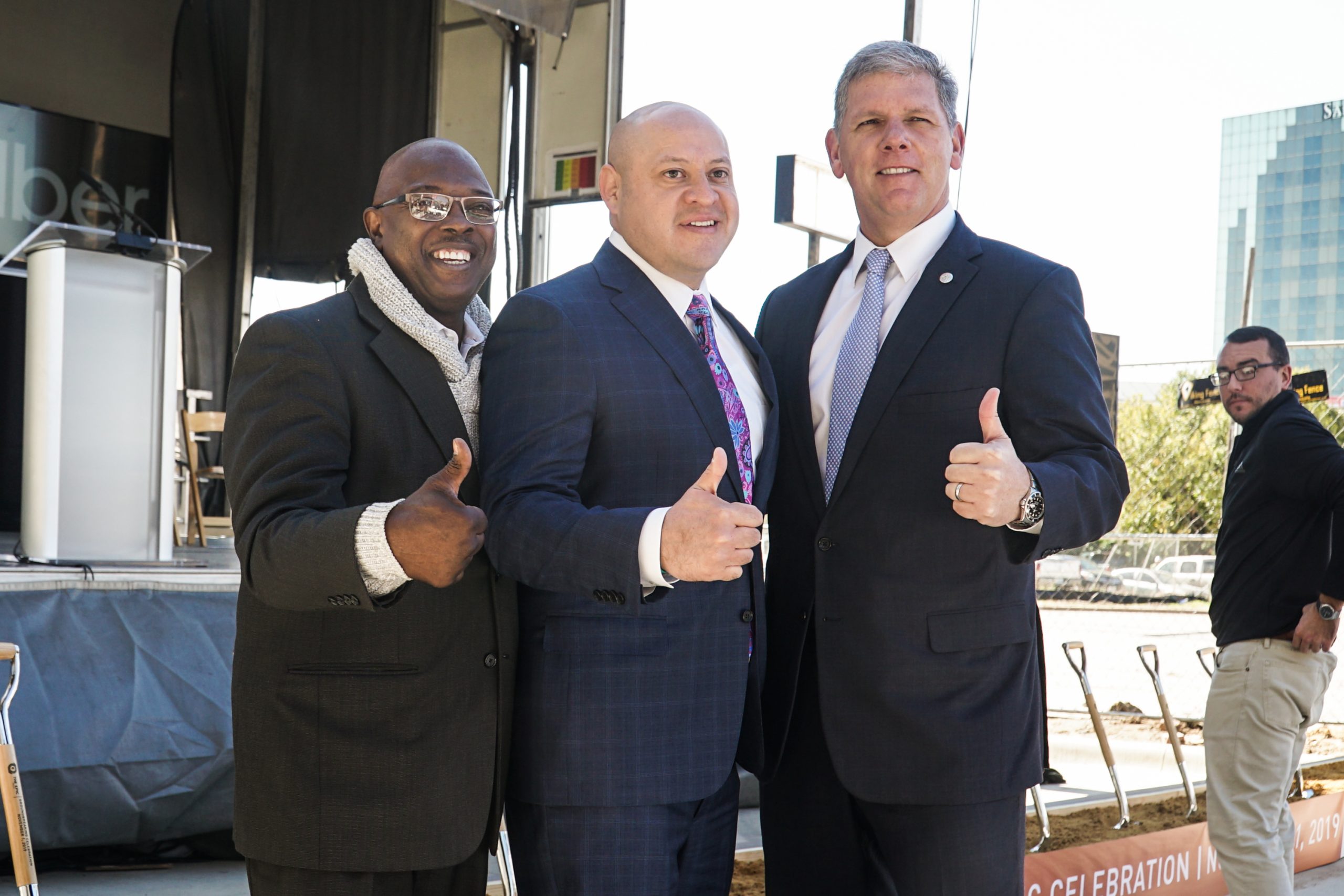 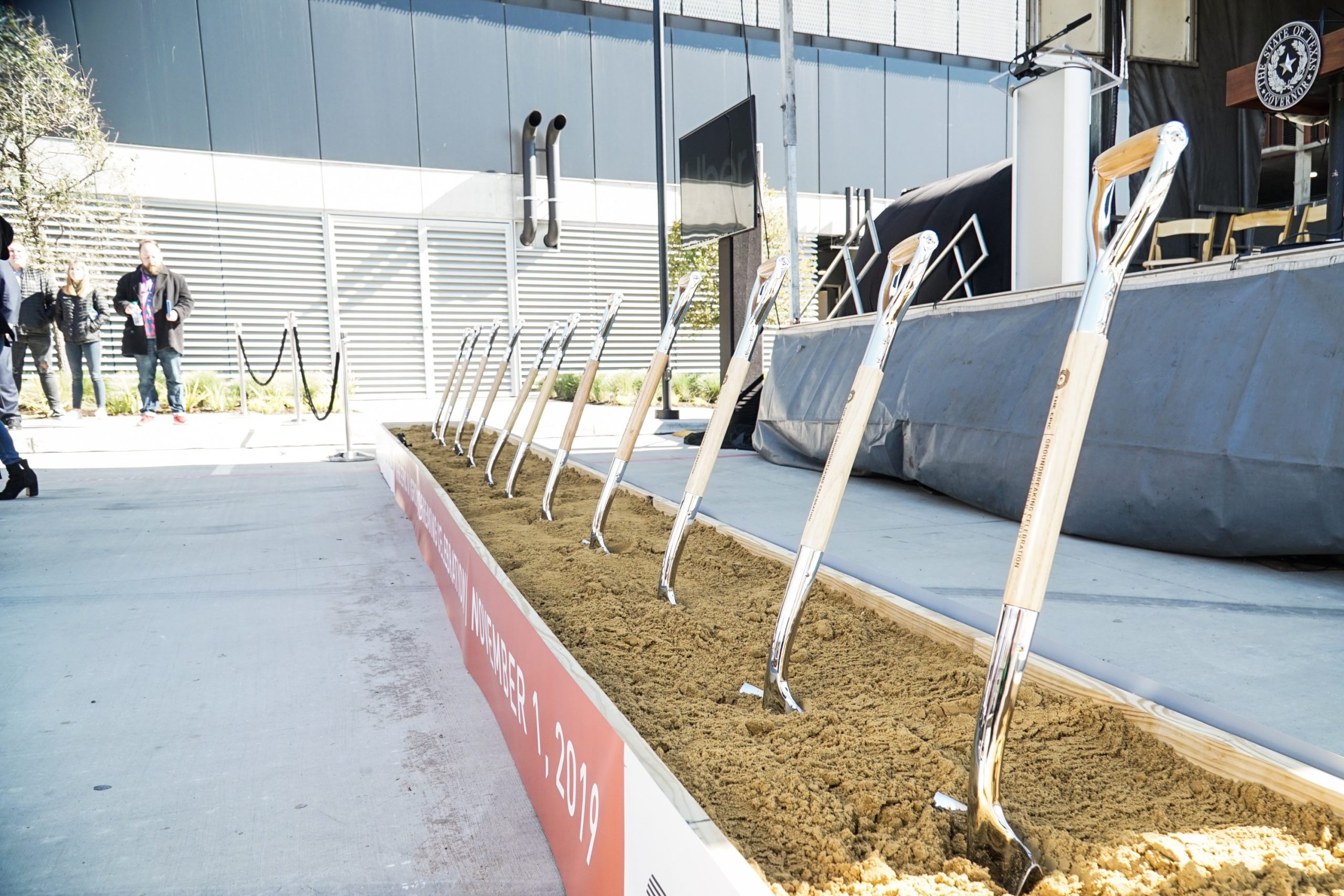 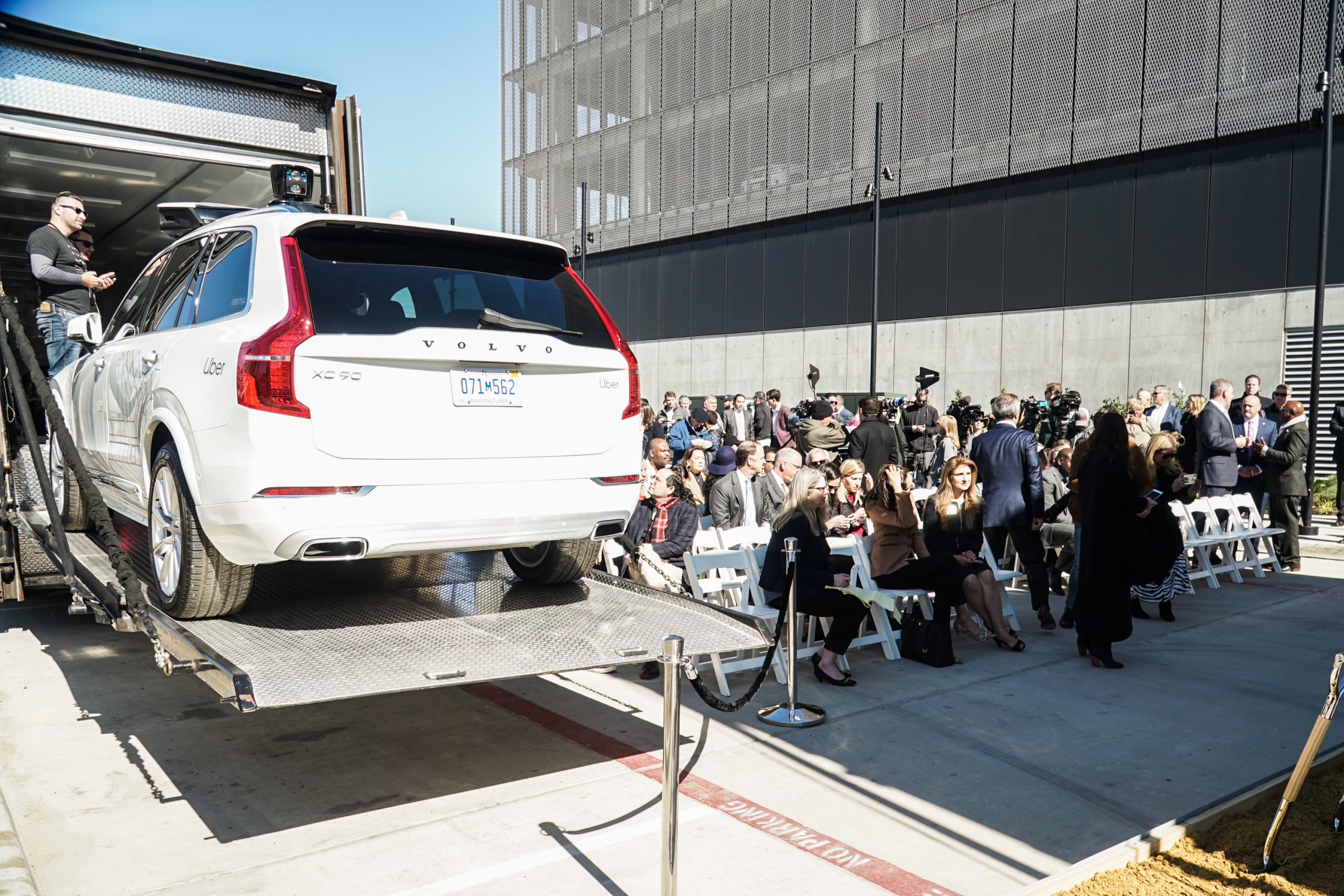 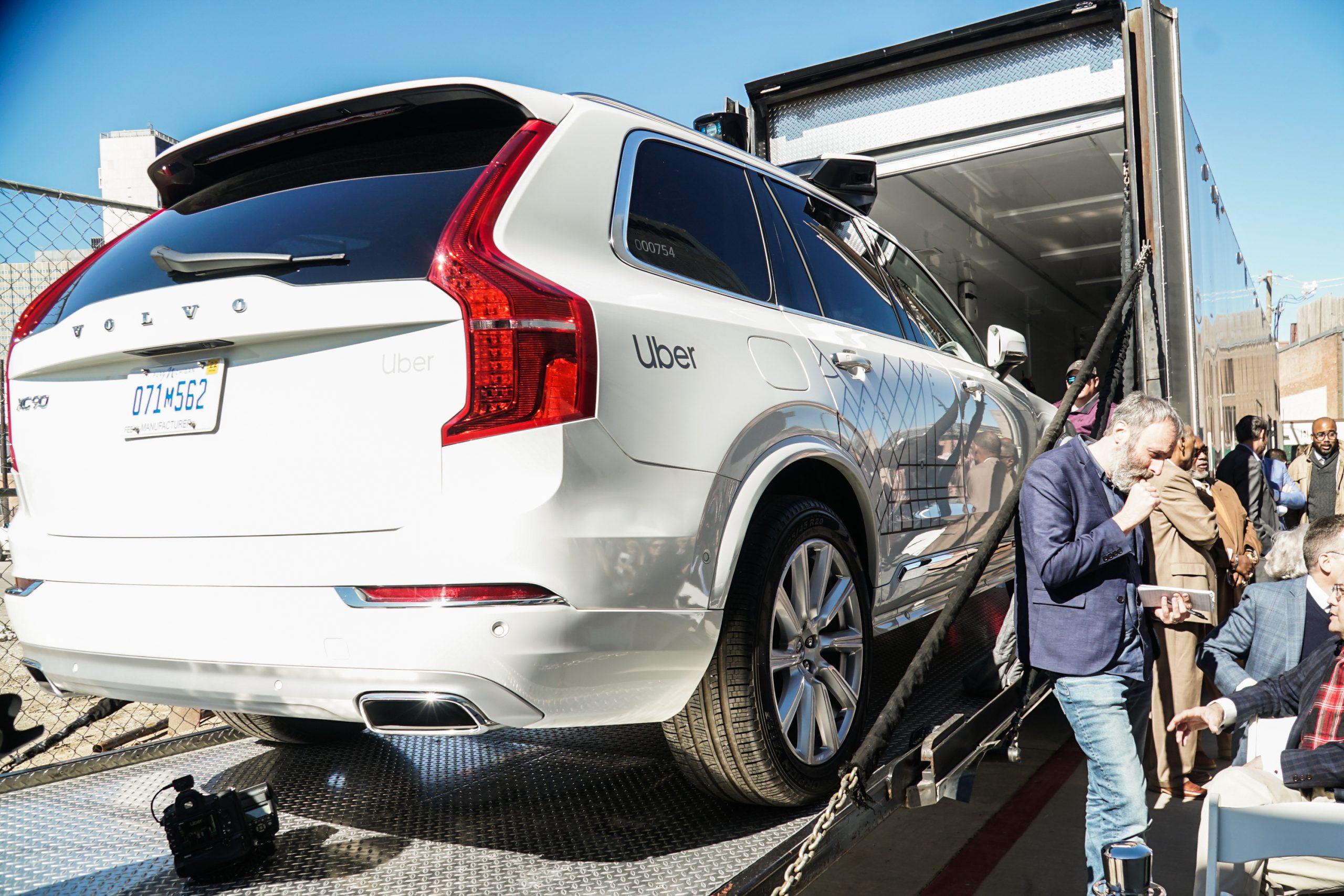 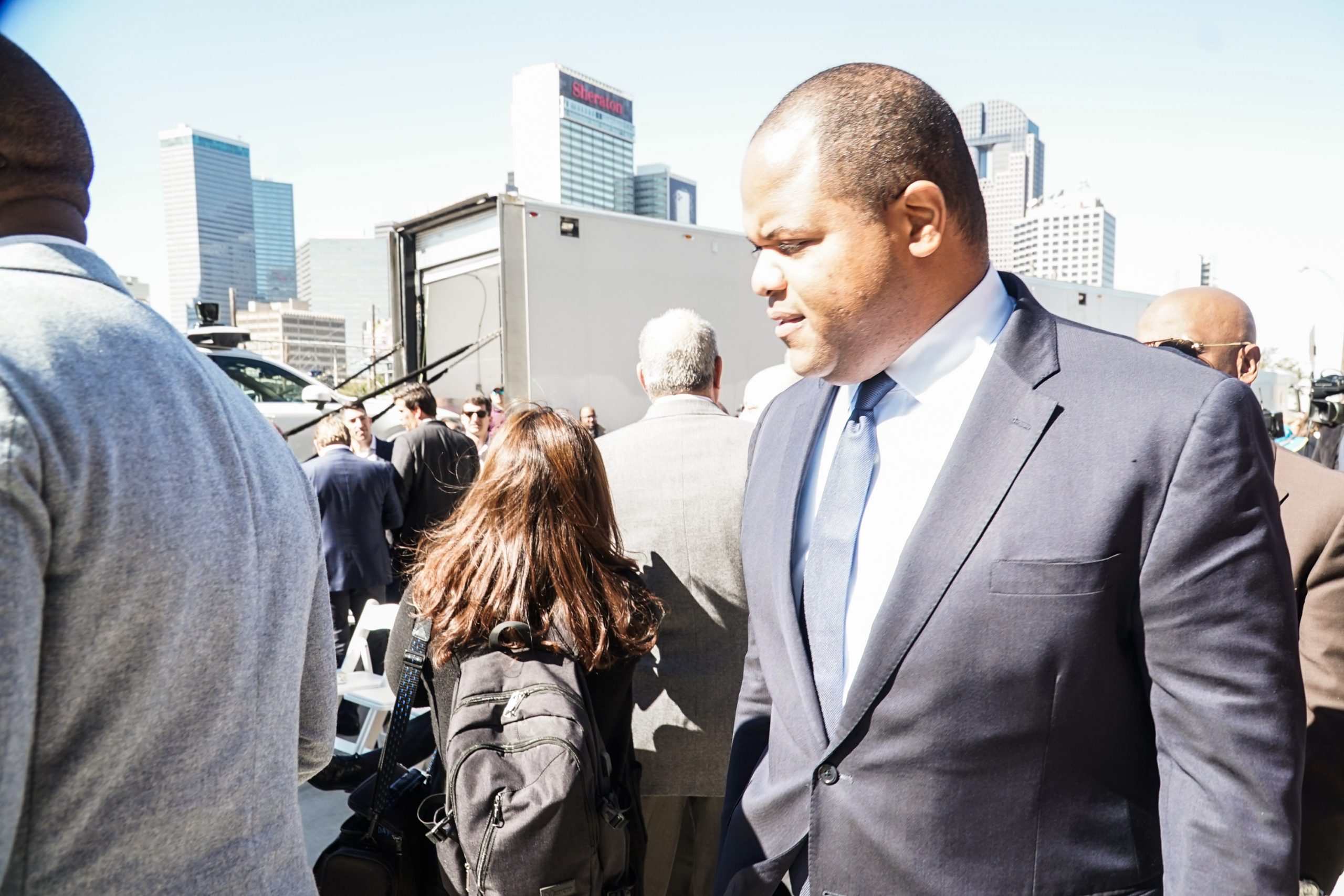 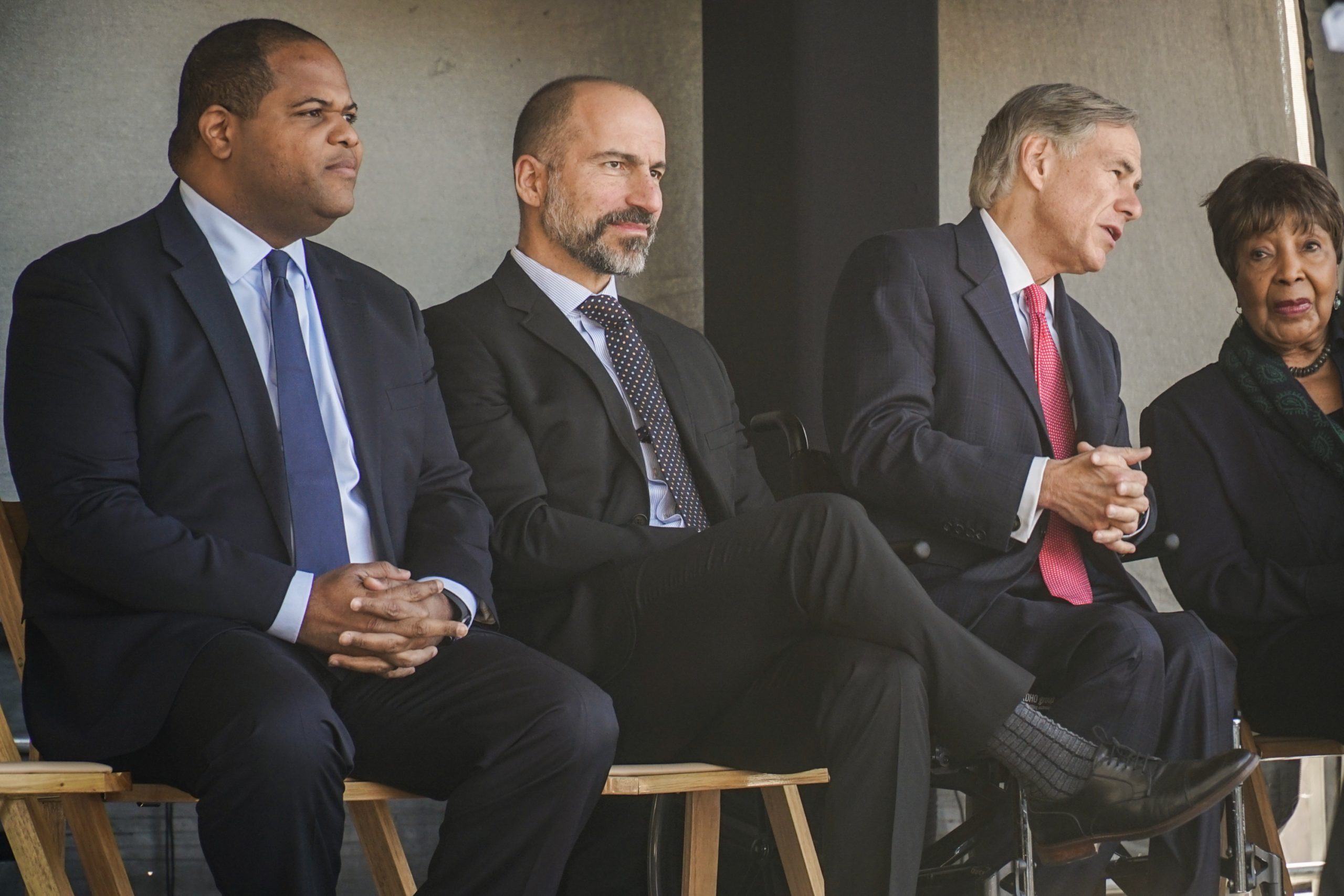 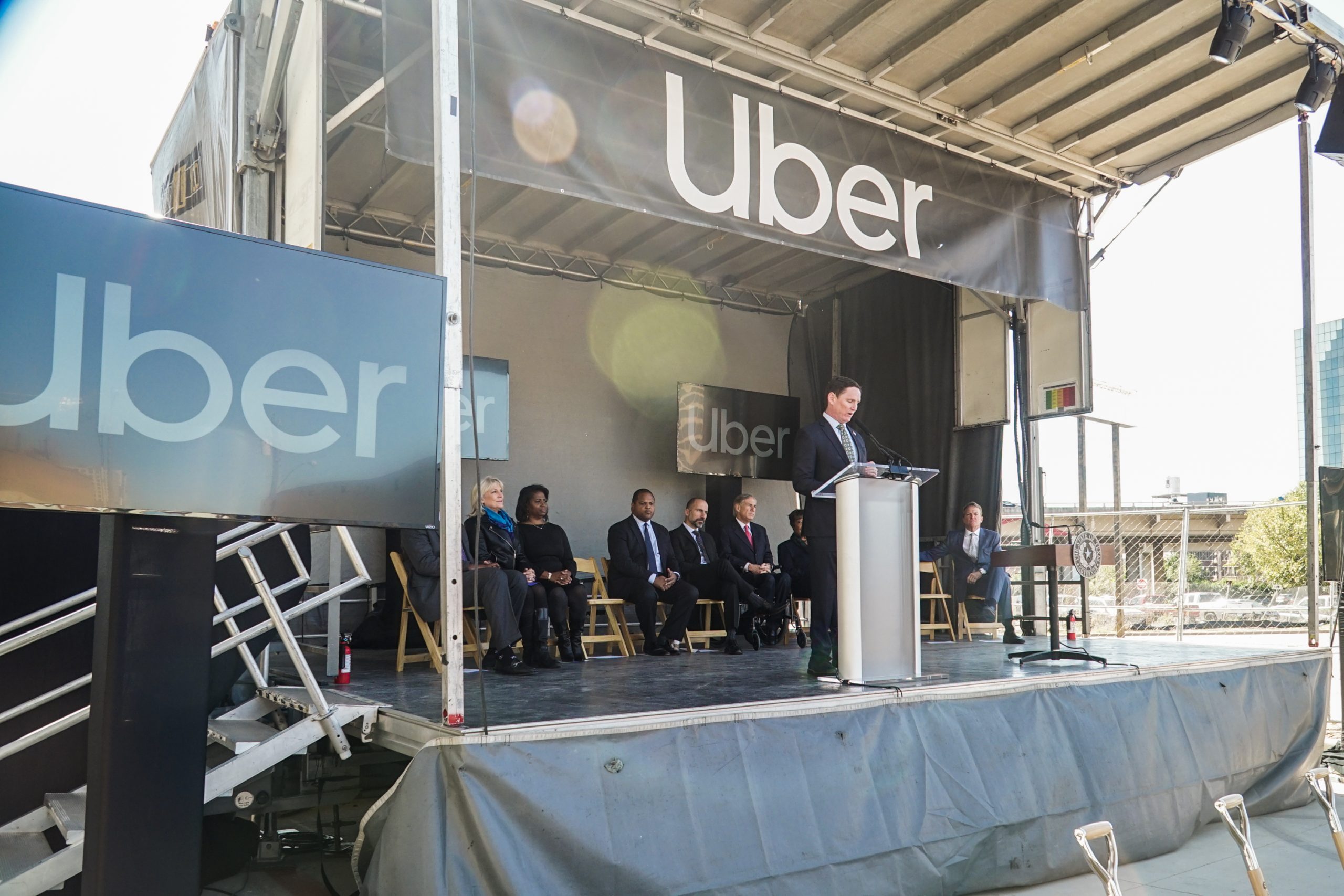 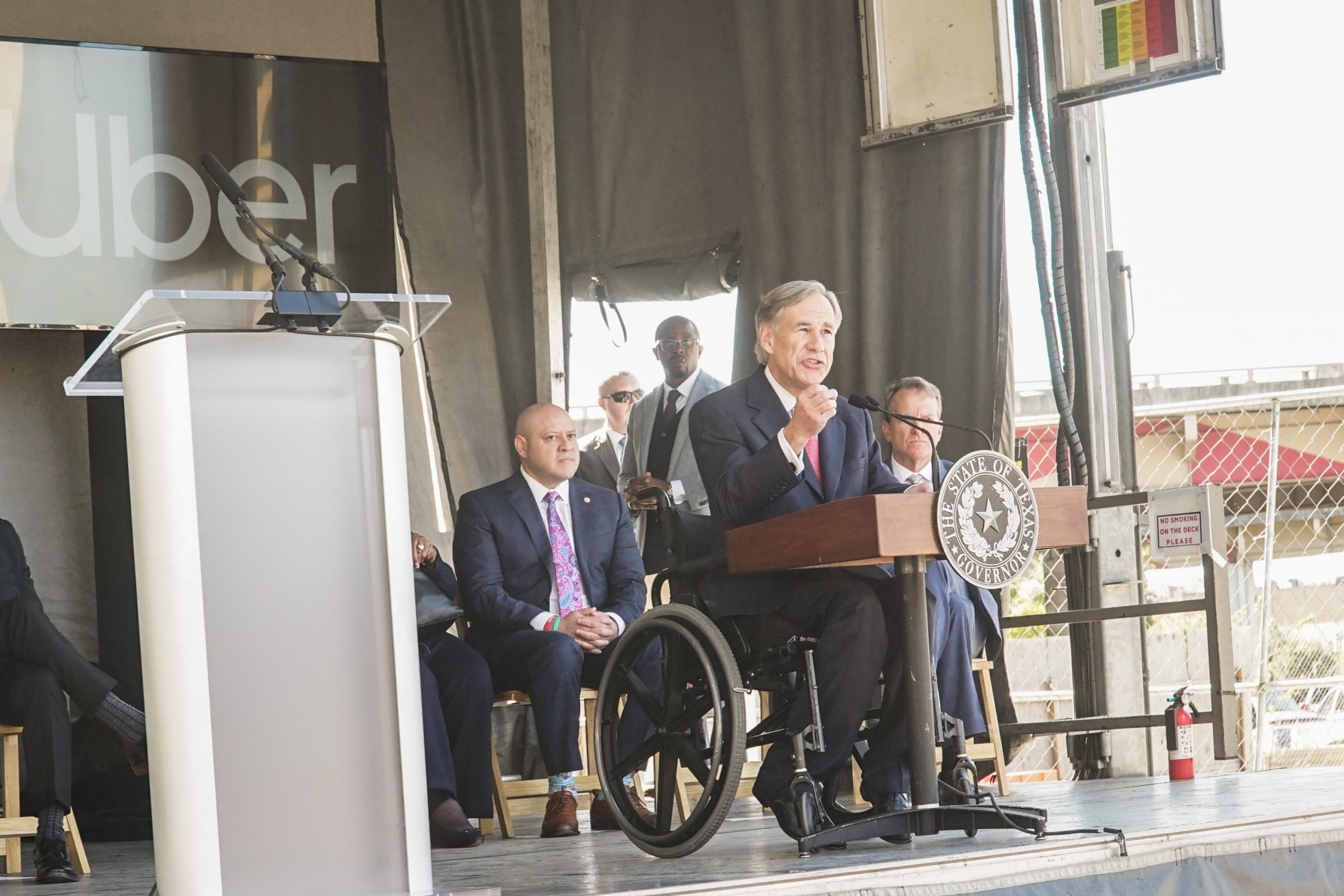 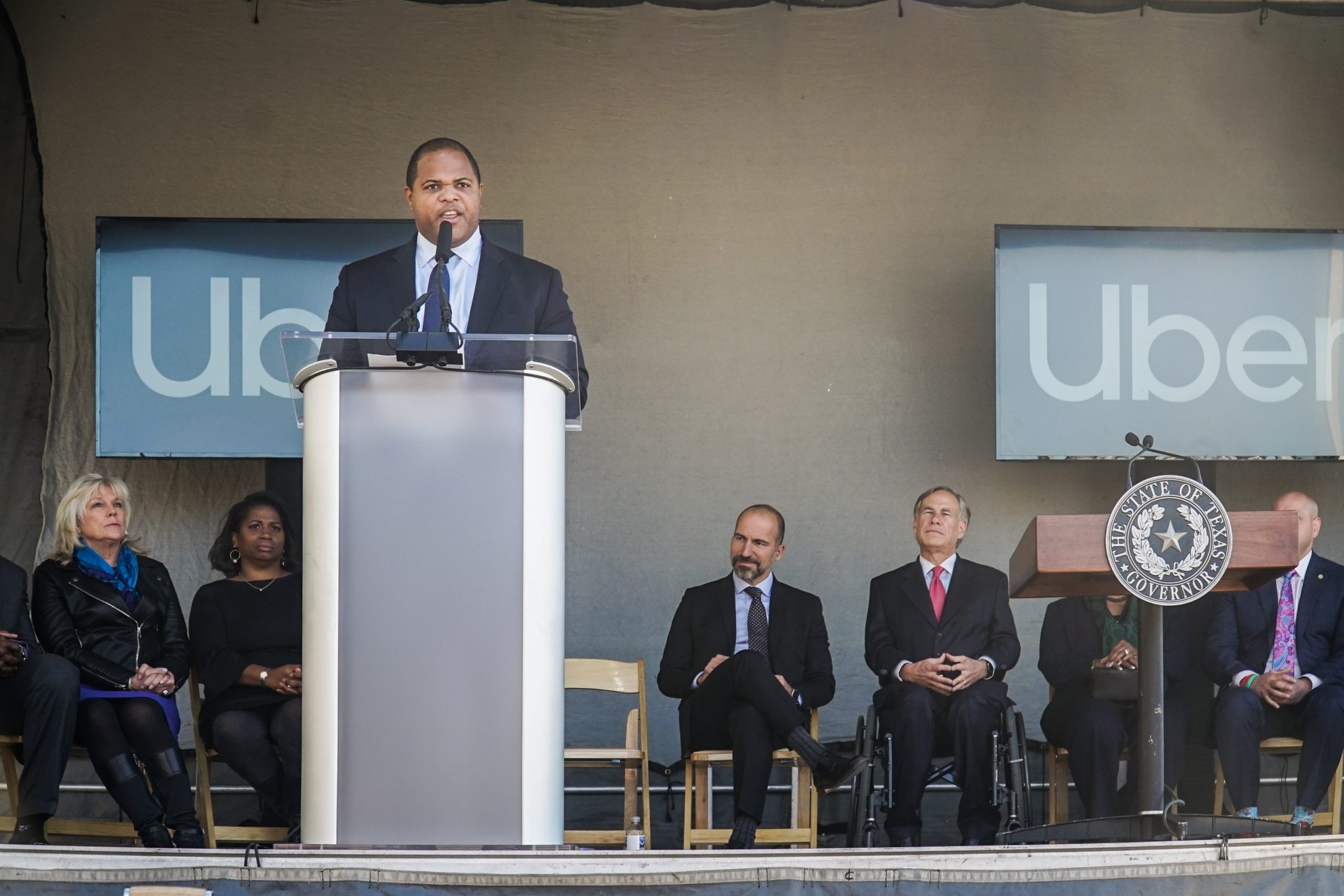 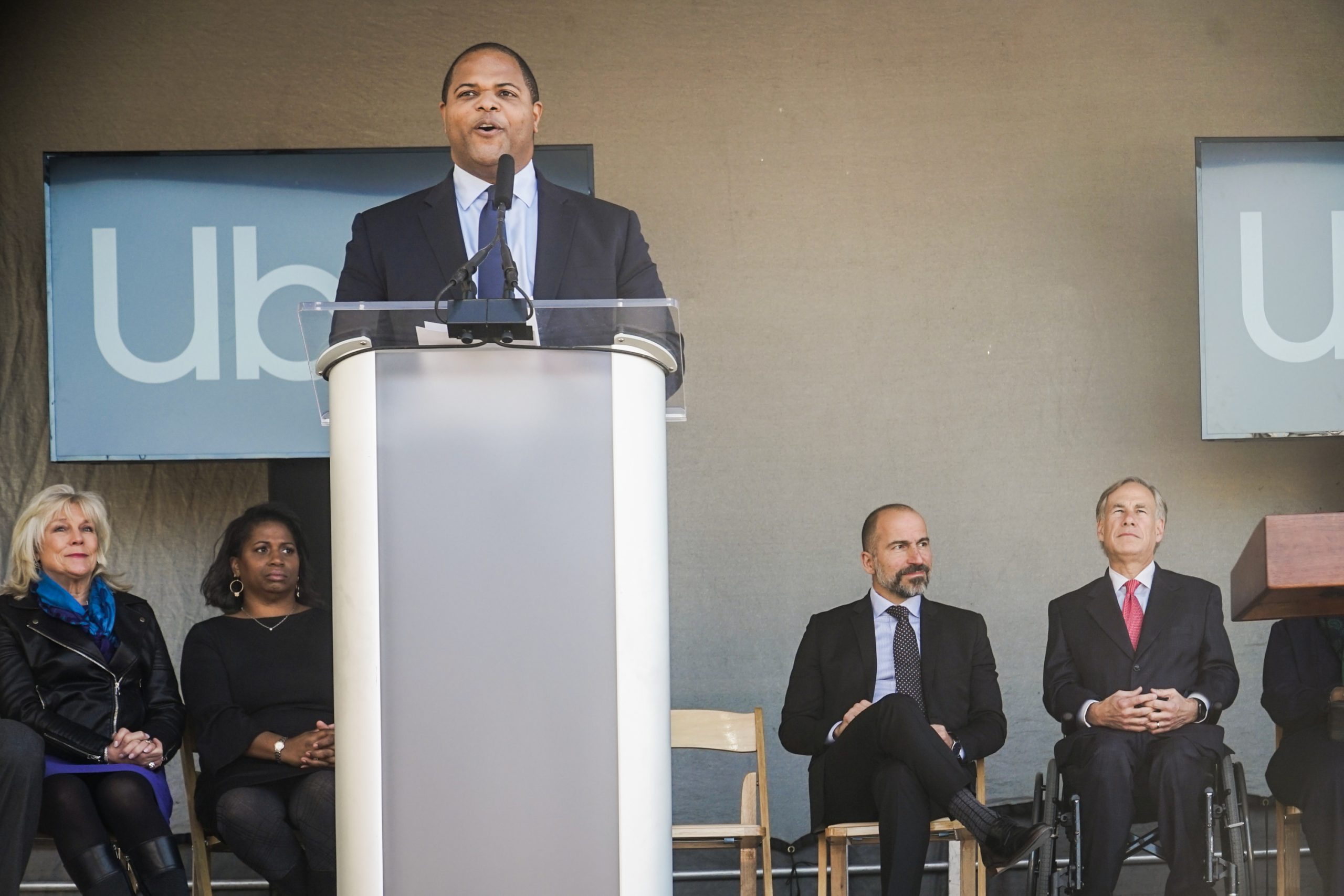 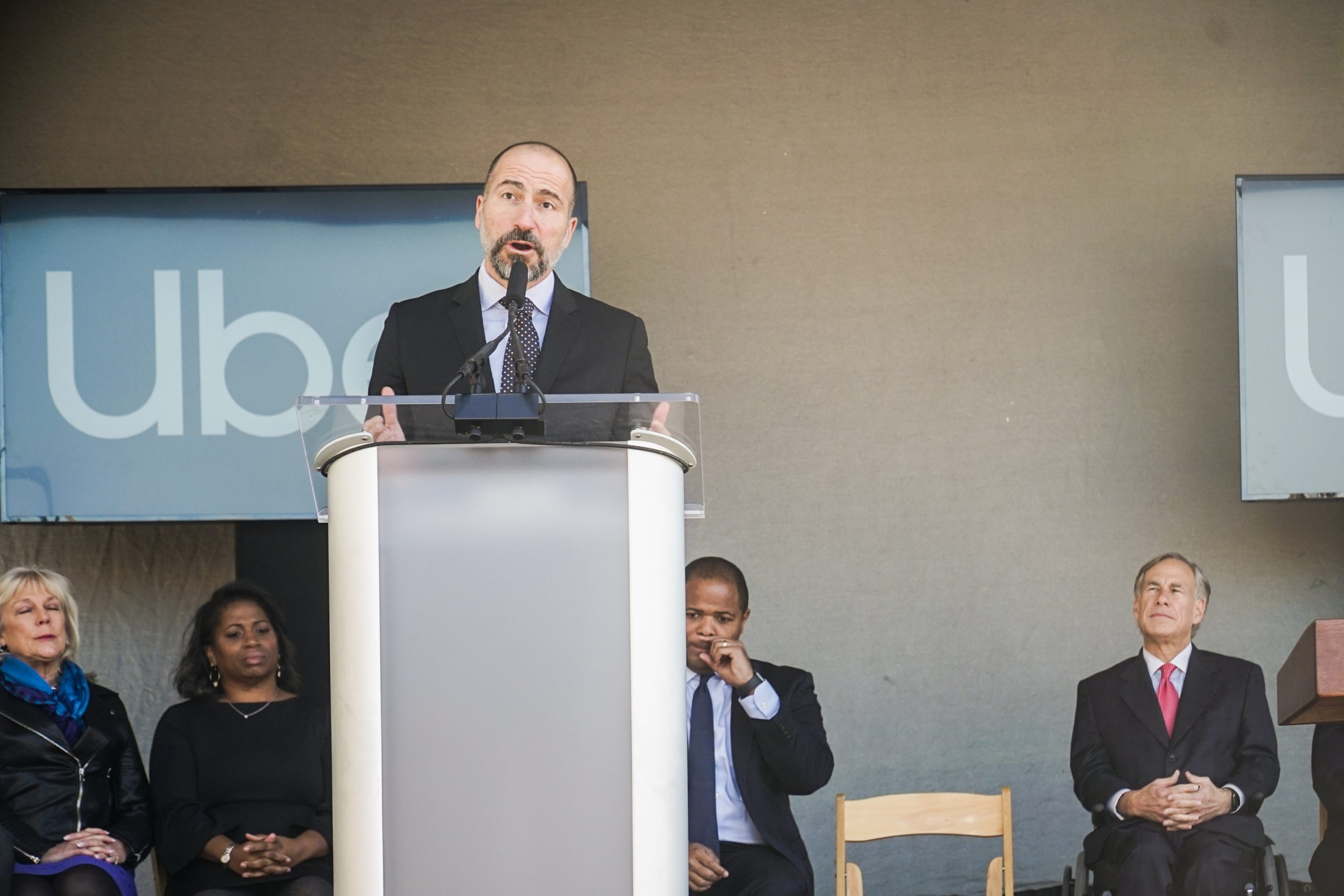 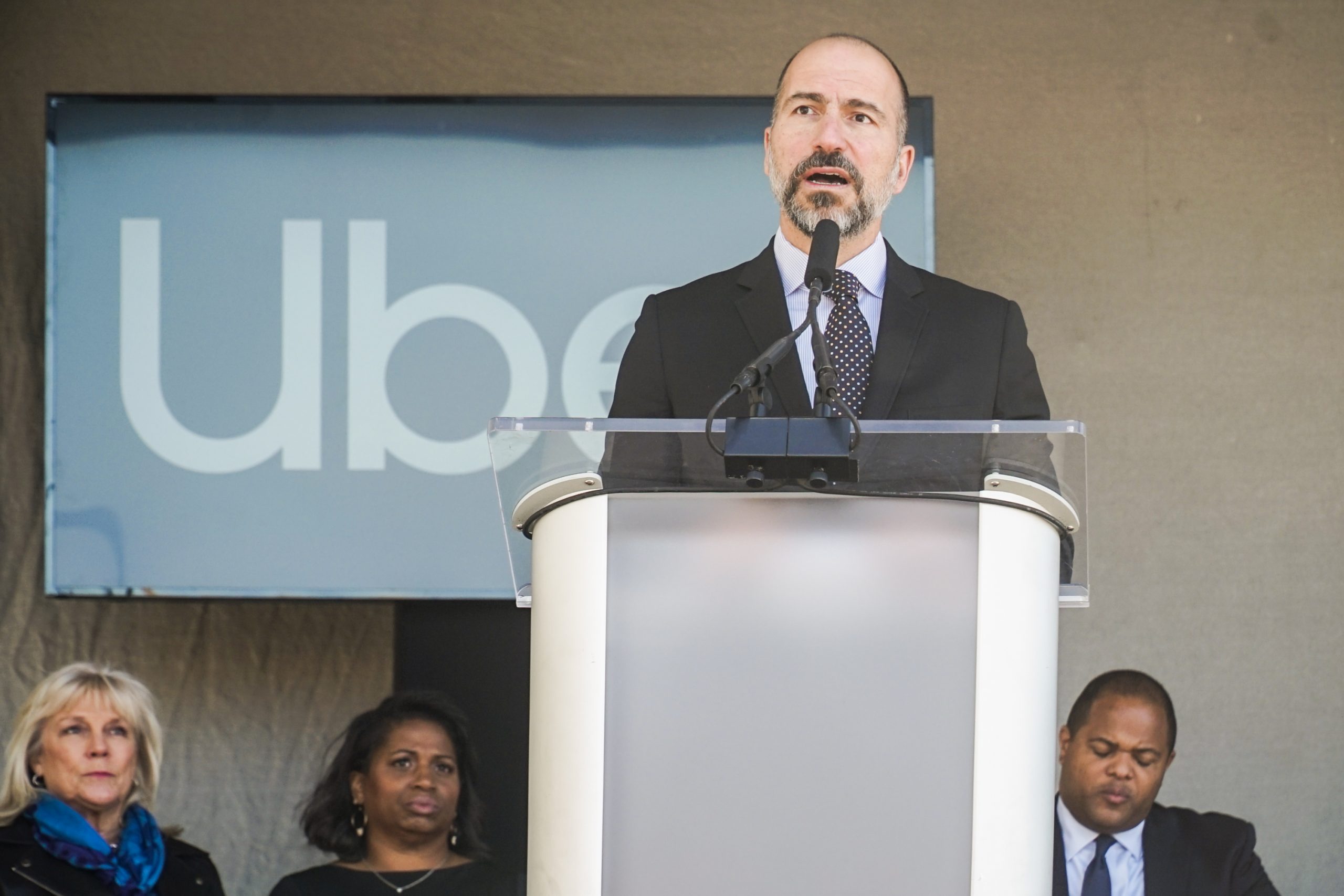 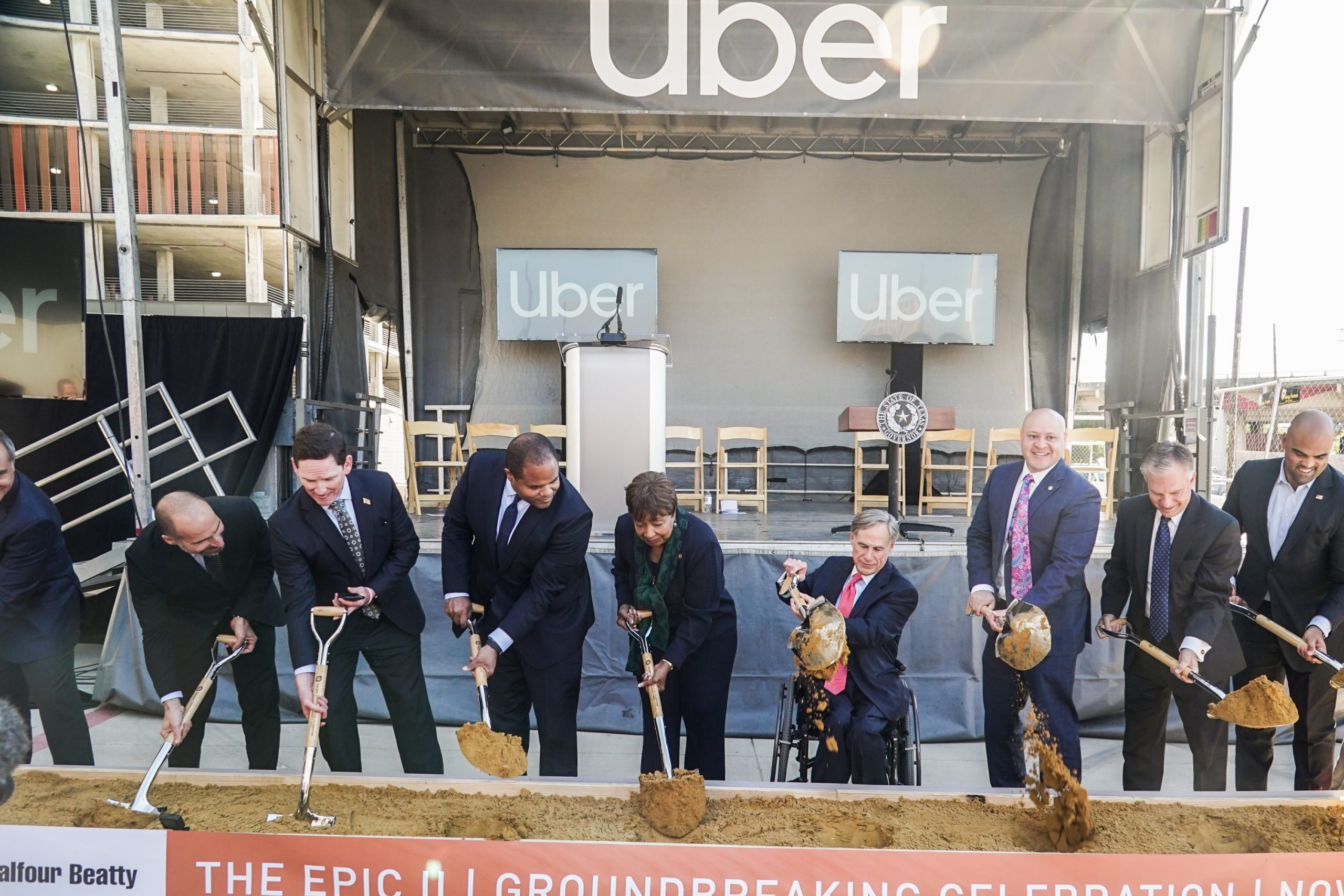 On Friday, The Biggest Political Players In Dallas Joined Uber’s CEO For A Ceremonial Welcome-To-The-City Event. What Did We Learn From It?

On Friday afternoon, Uber welcomed Dallas’ biggest wigs to a gussied-up alley within its new campus at the still-under-construction The Epic complex that it soon plans to claim as its home within Deep Ellum.

The occasion? A ceremonial groundbreaking on the development’s still-to-come fourth tower. It’s no small deal: Beyond the three towers currently standing within The Epic’s plot along the westernmost edge of Deep Ellum, this last tower represents the final cog in landlord Westdale Asset Management’s commitment to the ridesharing and tech giant’s entrance into Dallas’ hippest neighborhood — to the tune of an additional 470,000 square feet.

In turn, folks, this event had everything: a stage befitting a tertiary Austin City Limits bill; five rows of chairs reserved for area dignitaries and otherwise mostly anonymous power players; a sandbox of sorts containing fake dirt and shovels for the figurative breaking of ground; an on-loooking crowd of hundreds who looked dressed for a photo shoot that never came; bad country music blaring through the speakers because Texas; food from Cane Rosso, Tacodeli and Lakewood Smokehouse; speeches and/or appearances from Texas Governor Greg Abbott, Dallas Mayor Eric Johnson, Dallas County Judge Clay Jenkins and various members of the Dallas City Council; a formal hello from Uber CEO Dara Khosrowshahi; a gang of area TV outlet cameras taking it all in; and random publicists who’d say “Oh…” fairly disapprovingly upon the reveal that they were speaking with someone from Central Track.

Yeah, it was something else, for sure.

But, beyond the ceremonial back-pats and congratulations exchanged between the powerful men (and handful of women) involved in Uber’s arrival in Dallas, was there anything of actual value shared at the event?

Here are our top 10 takeaways from the ceremonial goings-on.

1. Mayor Johnson said Uber will be a “great fit” for Deep Ellum. The mayor said Uber’s arrival in Dallas confirmed that Dallas is a “21st century city,” and he celebrated the company’s arrival in Deep Ellum as a major victory for the neighborhood and the tech giant alike. Said Johnson: “Deep Ellum is one of the most urban parts of our city, and I’m confident that Uber and its employees are going to love it here. [In Deep Ellum, Uber employees] will have access to great restaurants, arts and entertainment — all within walking distance. They won’t even need to take an Uber to get to those.” Then he laughed. Most of the crowd did, too.

2. Mayor Johnson said the transformation of Dallas’ urban core in recent years has been “nothing short of remarkable,” and he credited those changes for the city’s being able to lure Uber. Johnson, who said he used to live in Downtown Dallas before it was cool to do so, credited the recent turnarounds of the Downtown Dallas and Deep Ellum neighborhoods as being directly responsible for Uber’s interest in Dallas. Said the mayor of Uber’s decision to move into our city: “It’s a testament to how far Dallas has come, and how far it can go.”

5. Uber plans to roll out driver-less ride-share vehicles in the city soon. Pointing out the two SUVs with GPS units atop their cabins that were on display throughout the event, Khosrowshahi  said North Texans can soon expect driver-less Uber rides to come to the city. The vehicles on site, he said, were mapping vehicles meant to help the company fine-tune its technological familiarity with the city’s roads in advance of rolling out that feature.

6. Dallas uses Uber Eats just as you’d expect it would. Beyond Judge Jenkins noting that Khosrowshahi claims to be a fan of the Dallas Cowboys, the most glaring bit of placation throughout the ceremony was Khosrowshahi claiming that Texas leads Uber Eats in orders of brisket delivery — to the tune of 200,000 orders, he said.

7. Uber will be partnering with a number of local nonprofits as part of its commitment to Dallas.  With Uber continuing to struggle financially, it makes sense that Khosrowshahi instead tried to draw attention to his company’s philanthropic aims at Friday’s event, announcing that his company had selected 73 nonprofits across the country to partner with in various capacities. In Dallas, the company will provide free transportation to support the efforts of five organizations: The Human Rights Initiative of North Texas, Jubilee Park & Community Center, Empowering The Masses, Paul Quinn College and The Family Place.

8. With 3,000 jobs slated to fill its new hub, Uber is hiring. He didn’t get into specifics, but Khosrowshahi said his company wasn’t simply looking to transfer it’s current employees to Dallas. Rather, it’s looking to hire locally — to a degree, anyway — for its new Deep Ellum offices: “We’re hiring, and we’re hiring fast,” he said. “If anyone is interested, apply to Uber.”

9. Even those involved in the event understood how audacious it was. Judge Jenkins, who served as the event’s emcee, cracked arguably the line of the afternoon while teasing the photo opp that ended the festivities. Said Jenkins: “We’ve reached the part of the event where middle-aged people in business attire take photos in front of shovels while their younger associates take photos of them on their phone.” I laughed.

10. In the grand scheme of things, Uber’s arrival is… well, it is what it is. On the way out of the event, we ran into Dallas City Council member and Mayor Pro Tem Adam Medrano, who had a big week between this gathering and the Dirk Nowitzki street-naming ceremony he’d helped organize a few days prior. Asked what was the bigger deal, Medrano was candid: “For me, personally? The Dirk street-naming. He’s my homeboy now!”