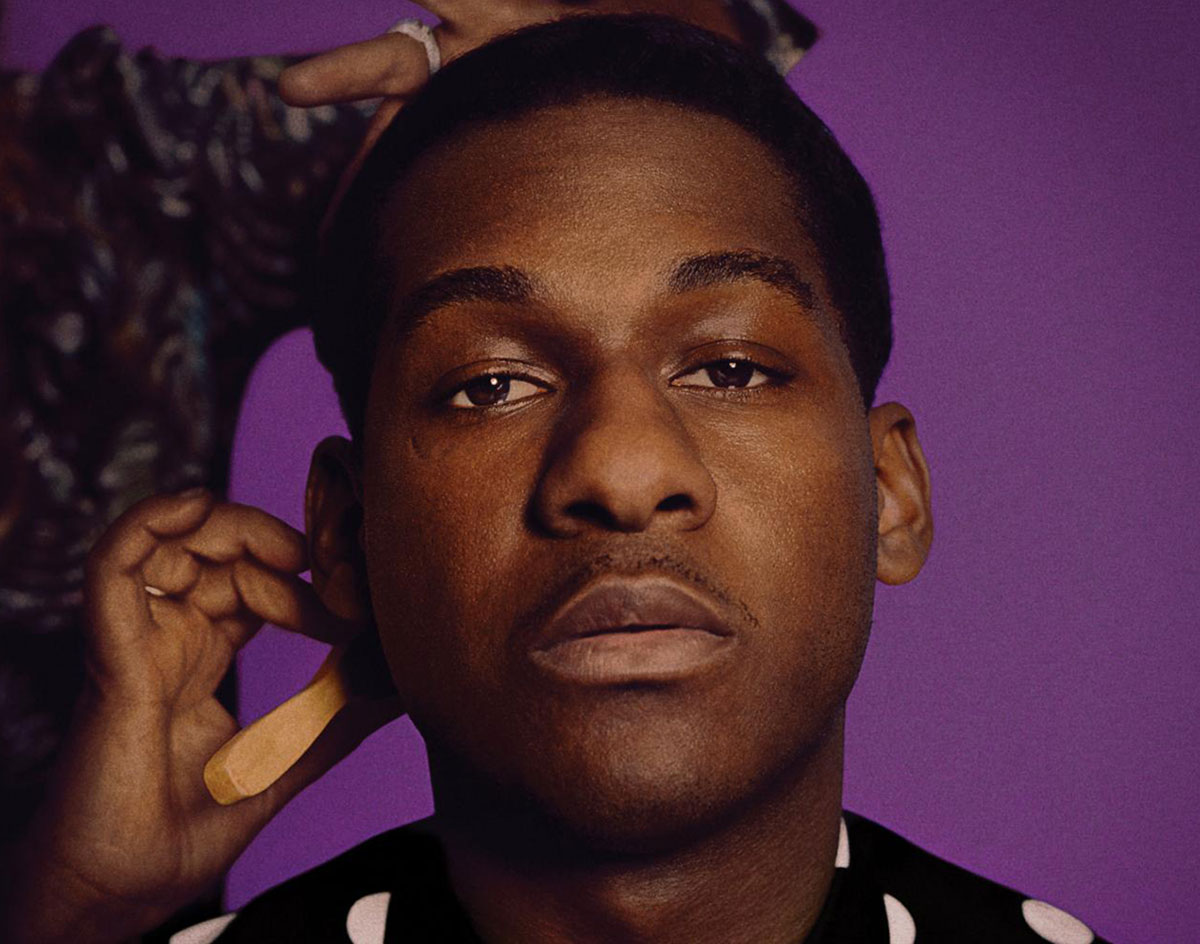 Leon Bridges — “Bet Ain’t Worth The Hand”
RIYL: Leaving here with nothing.
What else you should know: If there were any worries of a sophomore slump coming on Leon Bridges’ new album, they’ve been laid to rest with the release of Good Thing‘s two lead singles earlier this week. “Bet Ain’t Worth The Hand” in particular feels like a positive sign of what’s to come. It’s not only a wonderfully written track about a man realizing he’s unable to commit to woman who wants nothing more than that commitment; it’s also a lush, ethereal song that highlights Bridges’ signature earnest and comforting vocals while also featuring a little more swing and ’70s soul instrumentation than heard on his Coming Home debut from 2015. Get ready for Good Thing to drop for real on May 4.

Lil Ronny Motha F — “Fuck It Up (feat. T-Wayne)”
RIYL: Not fighting fair.
What else you should know: This cannot be understated: Lil Ronny Motha F’s “Fuck It Up” video is an absolute must-watch. The visuals are cinematic and feature complex choreography that should earn the artist tons of praise. He didn’t have to go to these lengths, but he did — and his Instagram posts prove it. Plus, the there’s even a decent plot that makes it feel like a short film. All this and we haven’t talked about the actual song yet! Well, the low-key rumbling baseline is the perfect backdrop for the artist’s unrelenting staccato flow. And it’s got a hook that’ll stay with you long after the track’s over.

Matt Swagnew — “Things For Words/100”
RIYL: Double features.
What else you should know: Matt Swagnew is relatively new to our radar, but the guy has our full attention after we premiered his double-feature “Things For Words/100” music video that he released earlier this week. The clip shows off the artist’s versatility, what with the first half of the video featuring a classic boom-bap beat atop which Swagnew tells the tale of an unspecified 10-year relationship (either about a woman or possibly about hip-hop a la Common’s “I Used To Love H.E.R.”) and the second half featuring a more straightforward, contemporary aesthetic. Through either aesthetic, Swangew’s confident and enviable delivery is undeniable.

Yella Beezy — “Up One (feat. Lil Baby)”
RIYL: Cups full of mud running in your liver.
What else you should know: Just as Yella Beezy’s fan favorite street hit “That’s On Me” starts to level off, the most surprising new Dallas rap star of 2018 is back with a new video for “Up One” — and he’s picking right up where he left off. Throughout his Lite Work, Vol. 2 release, Beezy’s unique southern flow and incongruous delivery make for a rather addicting match. On this song in particular, it’s as if every lyric hits between the beats — and it’s just genuinely interesting to keep up with. Lil Baby’s smoother complementary flow in the track’s feature position complements that nicely, too. Based on where we’re sitting, “Up One” feels like another hit.

Medicine Man Revival — “Voodoo Queen”
RIYL: Being on your way down.
What else you should know: This song’s been in the still-fairly-new Medicine Man Revival‘s live arsenal for a little while now, but without much from the band available yet online, let’s treat this just-released, Tramaine Townsend-directed music video for “Voodoo Queen” as a debut of sorts, OK? The video, set at the Texas Theatre, certainly merits that treatment. It’s just a wonderfully choreographed clip, featuring dancer Kiandra Brooks and MMR frontman Keite Young doing strange things until the morning light. Also, just the song along stands out as a prime example of Medicine Man Revival’s ability to deliver passionate, rock-indebted performances rife with soulful throwback aesthetics. It’s a sound that’s tough to pull off without being corny, but MMR’s found a way to strike that balance well.

Devy Stonez — “Spring Break”
RIYL: Not wasting any time.
What else you should know: Timing is everything, and we can only hope that this captivating new track from rapper Devy Stonez and producer Dreamchild is being spun somewhere near a beach in South Padre or Panama City beach this week — because, truly, that’s where it belongs. As is his wont, the golden-voiced Stonez commands this track despite offering up just one verse. It’s not a method we’d recommend most acts mimic, but when you’re as good as Stonez is, one verse is all you sometimes need.

Tre Ward — “I Crash (Feat. Mike Jones and Yung Me)
RIYL: Grinding since ’03.
What else you should know: Tre Ward is one of the more prolific artists in Dallas, which can sometimes make it easy to overlook his stuff. But his latest piece of work, called Flying With Owls, Vol. 1, is pretty irresistible. Over the course of 13 tracks, Ward delivers a plethora of styles and demonstrates a versatility of popular-these-days flows. Sure, at times it can feel derivative — but not on “I Crash,” though! Here, he bangs out a low-key flow that sets the table nicely for a pleasant surprise verse from Mike Jones — yes, that Mike Jones. Following Ward’s lead, the Houston grinder keeps the same low-key vibe going, which just feels absurdly refreshing considering he made a career out of exclaiming his name and phone number on any and all beats. Props to Ward for so smartly working in this placement for an OG who’s been quietly living in the area for some time now.

Lil Cobaine — “U”
RIYL: Seeing how I move.
What else you should know: This is the first track released from this promising young Dallas artist since he announced his new deal with Atlanta’s powerhouse Quality Control team, and it finds him picking up right where he left off with ethereal tracks like “Lie To Me” and “Let It Play,” which were among our favorite songs we heard all last year. “U” feels like it would be best experienced after a long night of inebriation while lying on a bed and doing an OK-at-best job of handling the spins, especially given the way the track hits its chopped-and-screwed second half. Impressive stuff.

Remy Reilly – “Rattlesnake”
RIYL: Torch songs.
What else you should know: If you’re not yet completely in tune with Remy Reilly’s music, then it’s worth our mentioning that she’s still only 14 years old, which is just astonishing considering her powerful vocals and wise-beyond-her-years lyrics. But, thing is, Reilly’s been singing since she was two years old and writing since age five. That kind of experience shows on a song like “Rattlesnake,” which is the second single of Reilly’s that we’ve featured in this space in as many months and which finds this fast-rising artist flashing her impressive vocal chops above a soulful groove. Oh, and if, while listening to this, you’re thinking, “Hey, this pairs well with that Medicine Man Revival song from earlier in this post!”, well, there’s a reason for that: MMR’s Jason Burt was among the team that helped Reilly cut the track.

Shaolin G – “Glumedaze”
RIYL: Starting problems just by resting
What else you should know: Emo sentiments and hip-hop backdrops are all the rage in Dallas right now — a fact evidenced by the fact that artists such as Danny Goo, Cashout Corduroy and Lil Reign Drop all dropped new singles along these lines this week, But few of his peers are delivering such heart-on-your-sleeve lyrics as Unity-TX frontman Shaolin G is on solo tracks like “SORRY4THAMESS” and the newer “GLUMEDAZE.” It also helps that, on top of the elements that others going for this sound use, he incorporates his post-hardcore roots, which give this particular track a lot more depth than the other emo rap tunes we’ve come across.