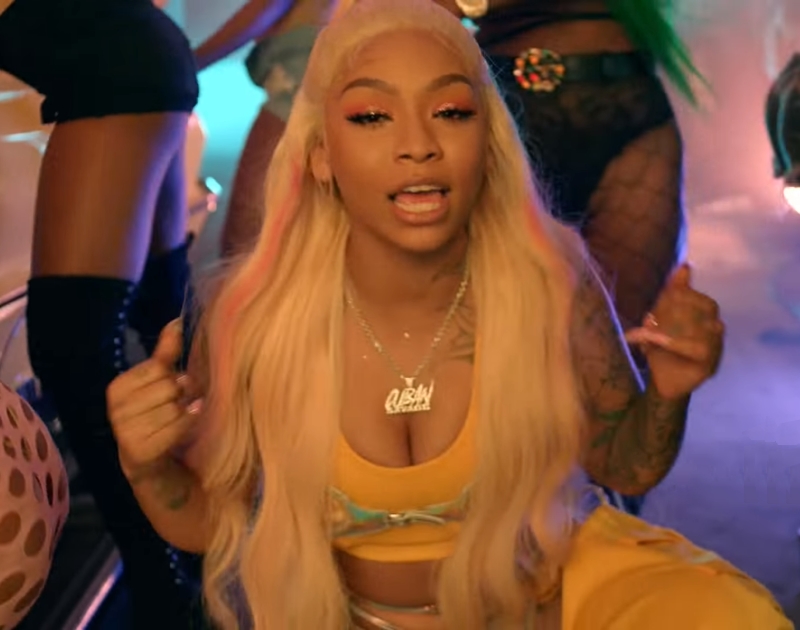 Cuban Doll – “Drug Dealer (feat Sukihana)”
RIYL: Hot Boys and Big Tymers.
What else you should know: From the same upcoming mixtape that spawned the Lil Yachty- and Lil Baby-featuring “Bankrupt,” the buzzing Cuban Doll’s “Drug Dealer” flips the Hot Boys’ 1999 “I Need a Hot Girl” collaboration with Big Tymers on its head, making it 100 percent less misogynist and twice as subversive in the process.

Brandon Fxrd – “Freeway”
RIYL: Rolling in your 5.0 with your rag-top down so your hair can blow.
What else you should know: After something of a lengthy hiatus, the 21-year-old Dallas rapper is back with a tasty new single and video that prove he hasn’t lost a step. That’s impressive, especially considering we basically haven’t written about this dude since he was still in high school. After listening to the above track, though, we get the feeling he’ll be popping up in our coverage far more regularly moving forward.

Nezi Momodu — The Endless Hour: Volume 1
RIYL: Schooling the boys.
What else you should know: The once-viral queen of freestyles gained her first bit of prominence three years ago when she stole the show as part of a cypher of Texas Tech students and made headlines with a line about being the only female participant. A couple years after, her wit remains sharp as ever. Need proof? Check out the Nigerian-born, currently Dallas-based spitter effortlessly flowing all ‘90s East Coast style over some soulful hip-hop slow jams on her new full-length.

Charlie J. Memphis – “Move Along”
RIYL: Train songs.
What else you should know: Let’s just say Charlie J. Memphis is leaps and bounds beyond where I was at age 17. For real, it was bad: I still got mistaken for a girl at drive-throughs back then, my Christian metal band could rarely get a gig outside the odd all-ages spot and I had only barely just started diving into things like Dylan and the Reverend Horton Heat. Yet here this dude is, working with Bowling For Soup frontman Jaret Reddick on big-boy singles like this. The only headscratcher here is that the song is about not being able to land a lady friend. Our guess is they’ll come a-running when his next EP drops in September. That one is being produced by John Pedigo.

DaShawn Shauntá – “Femme Fatale”
RIYL: Being respectful.
What else you should know: This Grand Prairie rapper comes out of the gate super strong on her very first single. With her sharp tongue and confident delivery, she waxes about the shittiness with which some dudes will go about trying to pick up ladies. At the same time, she offers up encouragement for all the females that have to put up with this bullshit on the daily. Shauntá tells us track is about getting men to see her for more than just her body, and for “women to stay wise and purposeful.”

Jake Schrock – “Tropical Depression”
RIYL: Productivity mixes.
What else you should know: The freshly signed Holodeck artist rides a fine line here on the title track from his upcoming full-length, in that the instrumental electronic jam could just as easily soundtrack a zoned-out session of typing away at the laptop at work as it could a most-happening pool party. It drops digitally and on cassette next week, so keep an eye out for that.

Kinsley August — Dos Más Durban EP
RIYL: The Fort Worth Sound.
What else you should know: It’s been a minute since we referenced the “Fort Worth sound,” huh? Last time we did it, it was more than a year ago, when we used the term to describe Siberian Traps’ latest effort, defining it as “that fuzzy, retro-leaning pop rock thing pioneered by Son of Stan.” Welp, if there were ever a time to bring it back, it’s to talk about this two-track EP produced and mixed by Siberian Traps’ Peter Wierenga and mastered by Son of Stan. Fitting!

About You – “Cactus”
RIYL: Spreading the love.
What else you should know: If there’s any silver lining to the breakup of former teen prodigies the Azalea Project when its members graduated and went off to different colleges a few years back, it’s that now they’ve each started up bands in their new hometowns. In addition to the New York-based Pueblo that put out a stunning EP a year ago, the Boston-based About You, led by Azalea guitarist/singer Max Poscente is now following suit — and similarly sounding seasoned beyond his years. How’d all these kids get to be such strong songwriters at such young ages, anyway?

Flexinfab — Gutter Boy
RIYL: Being wrong and oh so right.
What else you should know: One of The Fader’s Dallas rappers you should know about, the quirky SoundCloud rapper has a new proper release under his super young belt. It’s easy to see him blowing up, too — not just because he makes that everything-that’s-currently-wrong-with-hip-hop style of rap that’s mega huge rn, but because the flamboyant and charismatic Nawf Dallas kid puts quirky little spins and flourishes on the trope here and there that help set him apart.

Redsean – “Camera Shy”
RIYL: Dancing yrself clean.
What else you should know: We’ve long been a fan of this venerable Dallas DJ and onetime Sydney Confirm frontman. Really: A story about him was included in our coverage on our launch day back in February 2012! Since then, he’s turned in loads of remixes for local and national acts like, and dropped original content under such names as Crussia, Ghost Image and Uptown Goths. Finally back as Redsean, he’s somewhat surprisingly only now releasing his debut EP, whoisredsean. This is the closing track, and it is the kind of heat we’ve long come to expect from the man.

Yung Nation — iYess 3
RIYL: Threequels.
What else you should know: Nation back! The third full-length mixtape in the series that previously saw releases in 2011 and 2013 has taken five full years to arrive. That’s a long time! But has Yung Nation changed in that stretch? Hmmmm. What’s the opposite of “iyess?”

Essay EyE — Be Nice To Yourself
RIYL: Anime.
What else you should know: Even when we first caught wind of his raps about Dragon Ball Z a couple years ago, we were quick to realize Essay Eye was a legit talent with strong rhymes that deserved more respect than their niche subject matter. Now, dude’s fully woke and realizing the potential we noticed in him way back when. About time!

Creamer – “Drugs No More.”
RIYL: Just saying no.
What else you should know: Like most projects these fellas are involved with – and make no mistake, there are dozens up dozens of them – Creamer’s latest offers up as solid a piece of retro pop-rock you’re likely find. To wit, the project is headed up by former Dovetail frontman Philip Creamer, who taps old Dovetail bandmates and current Texas Gentlemen Scott Lee Jr. and little bro Daniel Creamer to join him here, along with fellow Gent Ryan Ake and The Autumn Defense drummer Dave King. Also of note is the involvement of Wilco multi-instrumentalist Pat Sansone on the other side of the glass.

Crown the Empire – “20/20.”
RIYL: Staring at your phone.
What else you should know: The title track from the Dallas post-hardcore act’s next LP explores Black Mirror-like subject matter such as wondering if our smartphones are making us more connected than ever or less socially bonded than we’ve ever been. Actually, I’m pretty sure that’s an exact plot from one of the episodes. Anyway, says lead vocalist Andy Leo: “It’s too easy to point the finger at vanity and self-obsession in technology, all the while being just as much a part of it.” If you say so, pal.

Parquet Courts – “Wide Awake!” (Danny Krivit Re-Edit).
RIYL: The re-re-re-remix.
What else you should know: In September, New York’s Last Great Rock Band (from Denton) will be releasing a 12-inch of remixes of tracks from this year’s Wide Awake LP. In the meantime, they’ve already released the first of these — and it’s the title track, remixed by “first wave NYC Disco pioneer” Danny Krivit. Really embracing those NY roots, boys!

Alejandro Escovedo — “Sonica USA.”
RIYL: Kicking out the jams.
What else you should know: The Belmont resident’s new LP The Crossing comes out in September, too. This is the first single, and it’s the punkest thing he’s done in forever. It not only name drops the MC5, but it features those punk legends’ guitarist, Wayne Kramer.

Norah Jones – “It Was You.”
RIYL: Smooth jazz.
What else you should know: Jones has been hard at work on the follow-up to her sixth LP, 2016’s Day Breaks, and showing as much by releasing two new songs the past two months. The first, “My Heart is Full” has been featured in a bunch of HBO ads of late. Out today is the second, a slow-moving soulful little piano number featuring a little trumpet and sax. It’s nice.

Jason Eady – “The Climb.”
RIYL: Songs that aren’t Hannah Montana covers, no matter how bad you want them to be.
What else you should know: The third single from Eady’s forthcoming album finds him offering up more sage advice. Its story about an old man is an extended metaphor meant to drive home the ol’ the-journey-is-more-important-than-the-destination adage. See, it doesn’t matter if you reach the top of the mountain, folks; you still gotta climb. Like the rest of the album, it was recorded live with his current backing band, using only acoustic instruments, and features his wife Courtney Patton on backing vocals.

Sheryl Crow and St. Vincent — “Wouldn’t Want to Be Like You.”
RIYL: Dancing with a ghost.
What else you should know: This collab comes from a still-untitled 2019 project from Crow. With regards to how she linked up with Dallas product St. Vincent for it, she recently told Billboard: “I called her and said, ‘I am dying to have you bring your St. Vincent-ness to this.’ And I said, ‘You will not hurt my feelings if you don’t like the song.’ And I sent it to her, and her response was, ‘Fuck yeah.’ That was a direct quote, as only Annie Clark can respond, which I loved. She did all kinds of stuff on it, and we pretty much used all of it.” That’s a fun story!

Kacey Musgraves – “High Horse” (Kue Remix).
RIYL: The re-re-re-remix.
What else you should know: Musgraves has already been showered with high praise by introducing pop music fans to country with the release of crossover success Golden Hour this year and for killing it out on the road with Harry Styles. Now one of the album’s singles are even more club friendly since getting the remix treatment courtesy of Kue and Violents. One is above, and the other is here.

Cody Jinks – “Lifers” & “Somewhere Between I Love You and I’m Leaving.”
RIYL: Both the cowboys and the hippies.
What else you should know: Since we last published one of these columns, the “Loud and Heavy” country man has released two more singles from his forthcoming Lifers LP, his first since signing to Rounder Records. The title track, co-penned with Tennessee Jet, is maybe the peppiest thing he’s ever put out. The title track, meanwhile, is another slow, piano-heavy ballad we’re pretty used to getting from him by now, co-written with help from Whitey Morgan.