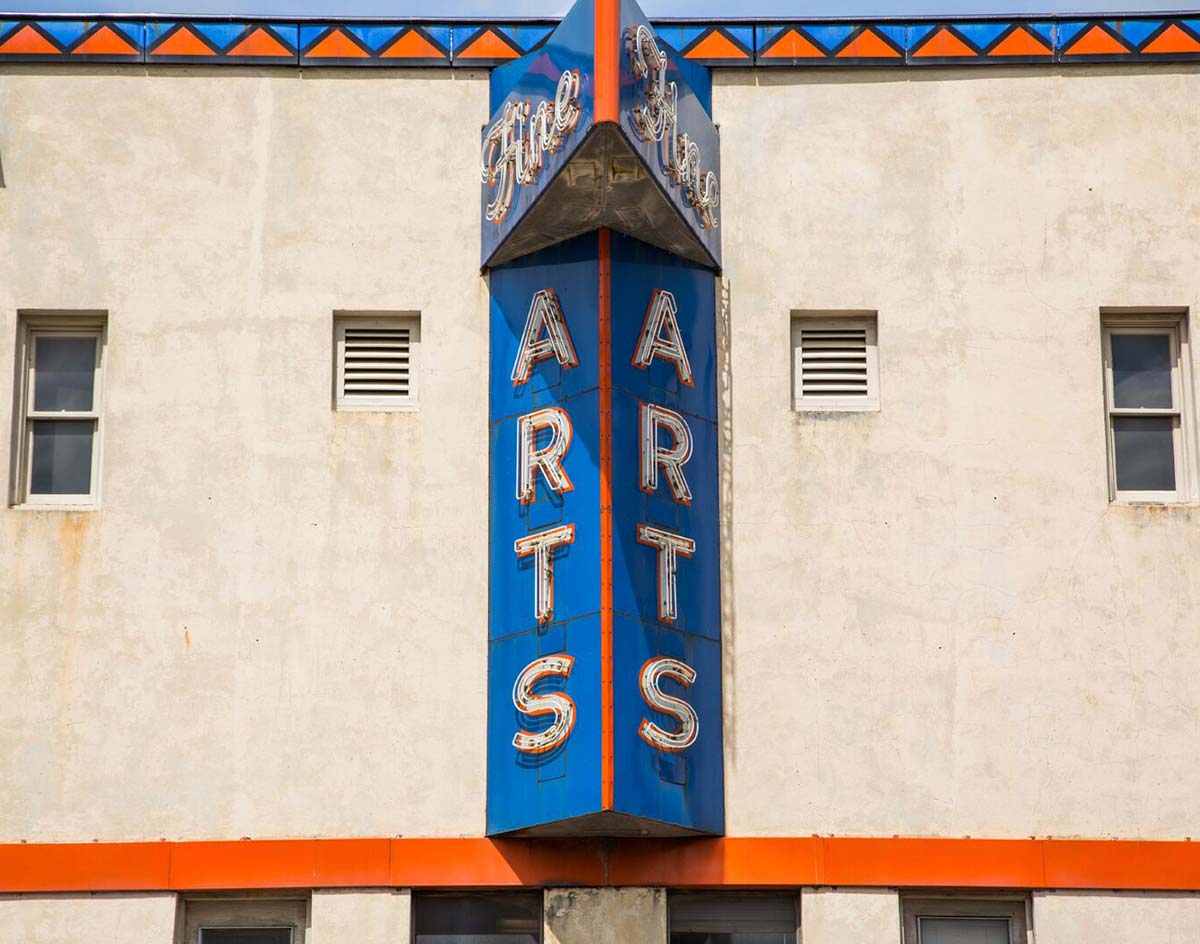 The Dallas Group Behind The Texas Theatre Plans To Bring A Similar Model To The Historic Venue It Plans To Re-Open On Denton’s Downtown Square In 2020.

A full 36 years since it last operated as a moviehouse, Denton’s historic Fine Arts Theatre is getting a reboot.

Closely associated Dallas entities Aviation Cinemas and Talented Friends announced via a press released shipped out to media outlets this afternoon that it has purchased the building.

That reveal follows a Denton Record-Chronicle report from this morning in which longtime co-owner Keitha McBrice confirmed that she had sold the building, but that she “did not remember the name of the buyers,” who she had been told had plans to “to keep it an entertainment venue, which could include music performances or movie showings.”

That profile certainly fits Aviation Cinema and Talented Friends’ descriptions, as those are the groups behind the movie theater/multipurpose venue The Texas Theatre, the nonprofit record store Top Ten Records and the Oak Cliff Film Festival, among other notable North Texas arts offerings.

According to the release, the building was originally built as an opera house in 1877 before being converted into a movie theater in 1935. At that point, rather coincidentally, it was known as “The Texas Theatre” before it was re-named as the Fine Arts Theatre in 1957, which was its name until 1982 when a fire forced its closure. (Head here for more information on the building’s history.)

Now, the team behind Dallas’ Texas Theatre hope to bring some of their deft touch — and proved Oak Cliff model — to this new spot. The new ownership plans to bring a variety of movie, music, comedy and speaking engagement offerings to the new space once it re-opens following a restoration that the announcement notes should be complete at some point in 2020.

Along with main Texas Theatre operator Barak Epstein and Talented Friends’ Jason Reimer, who is himself a former Dentonite, the release also notes that the ownership group has tapped Denton artist Martin Iles, known for his work with the Good/Bad Art Collective and its famed Rock Lottery events, to help shape the space’s identity and programming.

DENTON, TEXAS — May 30, 2018 — Aviation Cinemas and Talented Friends are pleased to announce a new partnership formed with Axis Realty’s Brad Andrus and Alex Payne for the restoration of the historic Fine Arts Theatre located at 115 N. Elm on the downtown Denton square. The building was originally built as the Graham Opera House in 1877 before being repurposed by famed movie palace architect W. Scott Dunne as “The Texas Theatre” in 1935 by Texas Consolidated Theatres Inc. It was re-named the “Fine Arts Theatre” in 1957, the name under which it operated until its last film screening in 1982 when a fire closed it down.

Talented Friends founder and Aviation Cinemas partner Jason Reimer was approached by Andrus and Payne in the spring of 2018 to create a new partnership specifically tailored for the Denton theater. Immediately joining the effort is Aviation Cinemas CEO Barak Epstein who heads up operations at the Texas Theatre in Dallas where they found similar success in 2010 with the now highly awarded theater. In addition to the Texas Theatre, Epstein and Reimer also co-founded the yearly Oak Cliff Film Festival which has been part of the revitalization of the historic Dallas neighborhood.

“The Fine Arts theatre has been something we’ve wanted to be a part of for many years, even before I moved from Denton to Oak Cliff and became involved with the Texas Theatre,” said Jason Reimer, Aviation Cinemas. “I’m so thrilled that we’ll finally have a chance to give the community back a venue that’s been closed for so long.”

Also joining the Texas Fine Arts Theatre team is Denton artist Martin Iles, who has been part of various large scale projects including the nationally recognized Good/Bad Art Collective, creators of the famous “Rock Lottery”, where he served as director from 1997-2001 in both Denton and New York.

“We really needed to form a group of people that are passionate about downtown Denton to operate this theater. Jason and Barak share a passion for Denton’s culture and feel strongly about preserving and restoring this iconic theater. The fact that they have operated a similar theater in Dallas successfully for several years gives us great confidence that they will make the Fine Arts Theater an asset for the community of Denton.” said Alex Payne, partner at Axis Realty.

The scope of the project includes restoration of the entire venue, adding 35mm & 70mm film projection, Digital Cinema and a live sound & lighting system. The programming, similar to the Texas Theatre in Oak Cliff, will feature a multitude of live events including music, comedy and other performance as well as the cinema experience fans have become accustomed to.

The team will also collaborate with consultants, community business leaders and local stakeholders to assure the rehabilitation of the theater is handled with careful attention to preserve and restore as much of the building’s history as possible, including taking steps to protect the Fine Arts with historic designation.

While the actual reopening is still many months away, the team have no doubts that it will soon become a cherished part of the current revitalization of the Denton square, while paying tribute to its storied past.

Cover photo of the Fine Arts Theatre by Peter Salisbury.
No more articles