Top Ten Is About To Become The Record Store That Isn’t. 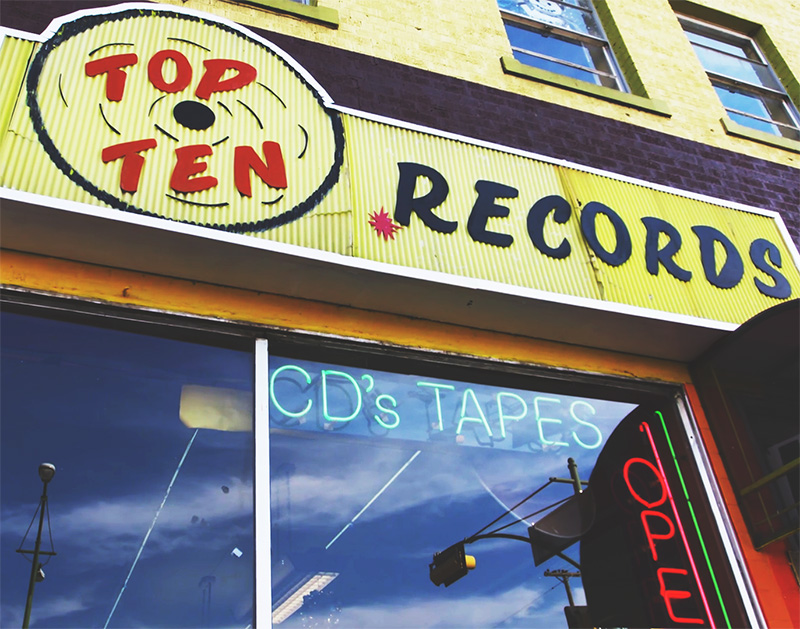 After 60 Years On Jefferson Boulevard, Oak Cliff’s Top Ten Records is Transitioning From A Record Store To A Media Library. Here’s What That Means.

Top Ten Records has been an Oak Cliff fixture since its opening more than 60 years ago. But faced with the economics of running a record store in today’s economy — and in a town with an absurd abundance of good choices — how can the Jefferson Boulevard mainstay remain relevant?

The answer: Get unconventional.

Taking a cue from outlets like Scarecrow Video in Seattle and Vidiots in L.A. — and adding in some of its own twists — Top Ten Records’ new model goes far beyond selling vinyl. In fact, come April, the storefront won’t represent a business at all, but rather a nonprofit organization.

Changing gears like this is unusual, sure. But it’s still keeping in line with Top Ten Records’ community-oriented focus: One of Top Ten’s main lanes for staying afloat moving forward is its institution of a membership option for its clientele. Just as they would at a library, members will be able to check out and rent items from the store, including a carefully curated selection of rare music and videos.

Much of that selection will come from a partnership with SMU’s G. Williams Jones Film and Video Collection, which includes such rarities as a ’60s-era recruitment film for UNT narrated by alumnus Pat Boone. Members will also have access to an online streaming channel featuring new exclusive content each month.

“We hope the online channel is what keeps [the customers] coming back,” says Top Ten board member Barak Epstein. “We want people to subscribe and come in. We’ll have a lot of local stuff, but the channel will be an incentive for people who live outside Dallas.”

Epstein is also the manager of Aviation Cinemas, which runs the Texas Theatre, just a block away from Top Ten Records’ storefront. Epstein says the group behind Top Ten’s new direction is aiming for a similar vibe, where people don’t just come in to get their content fix, but stay and hang out and meet other fans.

Judging by the crowd at a pop-up event held this past Sunday at the shop, that should prove an easy-enough goal. Nearly every customer I spoke to at the event had a story to tell about the music they loved and the memories they made while discovering great records at Top Ten. They also had plenty of positive things to say about current owner Mike Polk, who’ll also serve on the board of the new incarnation.

Historically, Polk has been just about the only record store owner in Dallas to put any effort into carrying a wide selection of Tejano music — a vital offering in a neighborhood of mostly Latinx businesses. His was the only shop to carry the music played on KNON 89.3 FM’S “Latin Energy” program. So of course, that station’s partnership with Top Ten will keep going in the new version, too.

“We’ve been involved [with Top Ten] for 20 years,” KNON station manager Dave Chaos says. “We’re both nonprofits. The handshake [on this new venture] was inevitable.”

While it plans on staying true to its local roots and emphasizing Texas artists, the store will, however, undergo a redesign.

“We want to make it feel like an exhibit to history,” board member Skye Malish-Olsen says of that aim. “You’ll go through the eras the store has been through.”

The space will keep its basic layout, as well as the original Philco sign it boasts overhead. But most merchandise for rental and sale will stay up front, while the back of the store will feature a lounge and viewing area, giving it a cozy but not crowded hangout space — a marked difference from, say, Josey Records’ endless aisles or Good Records’ sometimes cramped quarters.

Through the new changes promised, the Top Ten team hopes to set up its future via donations to its IndieGoGo page, which is active through the end of the month and where founder memberships are being sold. On the last day of that campaign, the store will host what will likely be its final pop-up event with a free screening of the 1995 cult classic Empire Records.

Should all fundraising goals be met — at the time of this writing, the IndieGoGo campaign has raised just over $14,600 of its $40,000 target — Epstein says he hopes Top Ten’s remodeling can be completed in time for a Record Store Day 2017 celebration on Saturday, April 22.

For Polk’s part, he just doesn’t want the remodel to take too long.

“I wanted to keep this going,” Polk says. “I’d only be unhappy if we had to close.”