How Much Does DPD Spend On “Less-Lethal” Munitions? 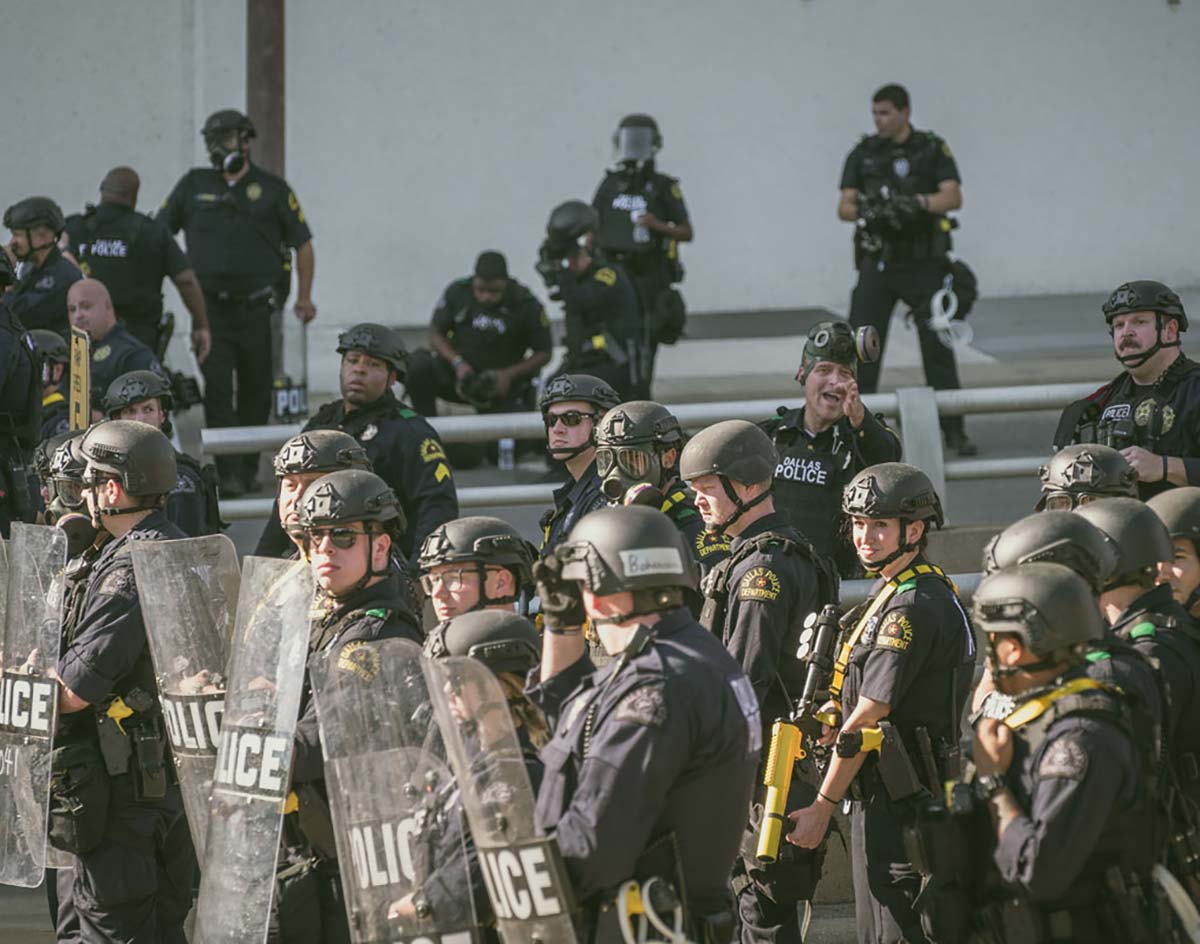 Public Documents Reveal Exactly How Much Money The Dallas Police Department Has Spent on “Less-Lethal” Munitions In Recent Years.

Although council member Omar Narvaez expressed concerns over the agenda item’s passing during its discussion period, the vote passed by a margin of 13-2, with Kleinman and Bazaldua representing the lone dissenting votes.

City Manager T.C. Broadnax noted that this agreement would normally have been an “administrative” item and explained to council that the agreement had not been presented to any public committee prior to the council meeting, but only discussed in internal conversations with council members. With the lack of visibility on the item, it’s unsurprising that no members of the public showed up to speak out against it.

Says Kleinman when reached for comment on the result of the vote: “It’s unconscionable that the mayor and most of my colleagues condone the use of tear gas and assault weapons against the residents of Dallas.”

An analysis of public records obtained by Central Track reveals that the Dallas Police Department has spent at least $579,979.47 between 2017 and 2020 on “less-lethal” weapons and ammunition such as rubber bullets, pepper balls and tear gas.

About 25 percent of the aforementioned $580k was spent between June 2 and June 8, 2020 — immediately following the first four days of racial justice protests that culminated in the kettling and mass arrest of protesters on the Margaret Hunt Hill Bridge.

Three days later, a June 11-filed temporary restraining order barred the Dallas Police Department from using tear gas and other chemicals against non-threatening people at protests, and also prevented DPD officers from firing or deploying kinetic-impact projectiles (rubber/sponge/wooden bullets) into crowds under any circumstances. After various extensions through the fall, and following DPD promises to readdress its policies on the matter, that court-ordered stay was officially lifted on November 15.

Throughout the first four days of a summer’s worth of protests in Dallas, police tear gassed and shot people with rubber bullets and sponge rounds from weapon and ammo purchases made under a five-year, nearly $7 million master agreement authorized by city council in 2013, which was extended in 2018. 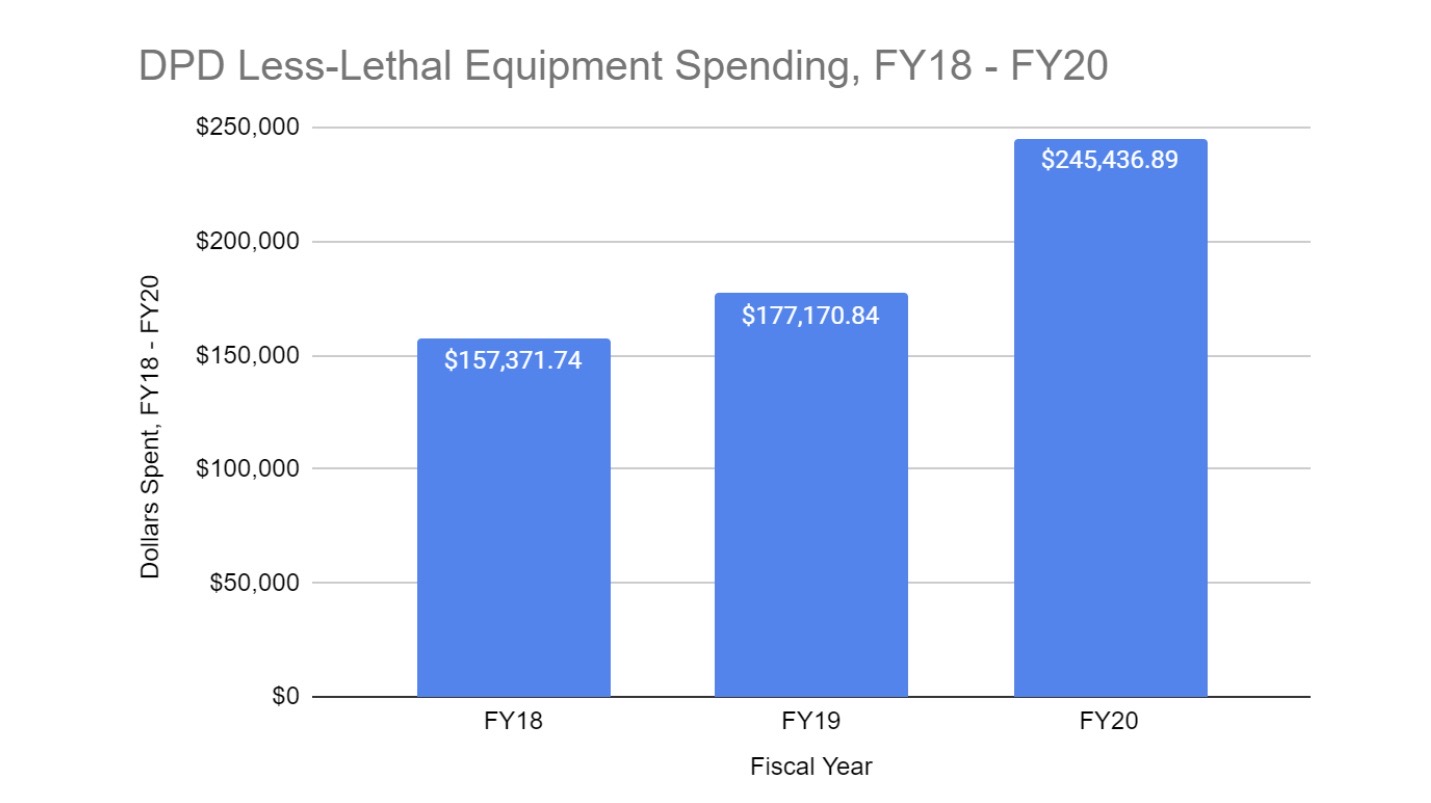 Just over 50 percent of the total amount spent specifically by DPD on “less-lethal” items was used for sponge rounds — a total of $308,114. These are the same “less-lethal” weapons that took the eye and nearly the life of protester Brandon Saenz.

The remaining 47 percent — about $271,000 — was spent on a variety of weapons and munitions such as tear gas, pepper balls, rubber bullets, warning munitions and flash bangs.

“I had a conversation with DPD and [outgoing DPD Police] Chief [U. Renee] Hall, and they told me that somewhere around $200,000 a year is spent on average on less lethal [weapons] — and around $1,000,000 is spent on live munitions,” Kleinman says. 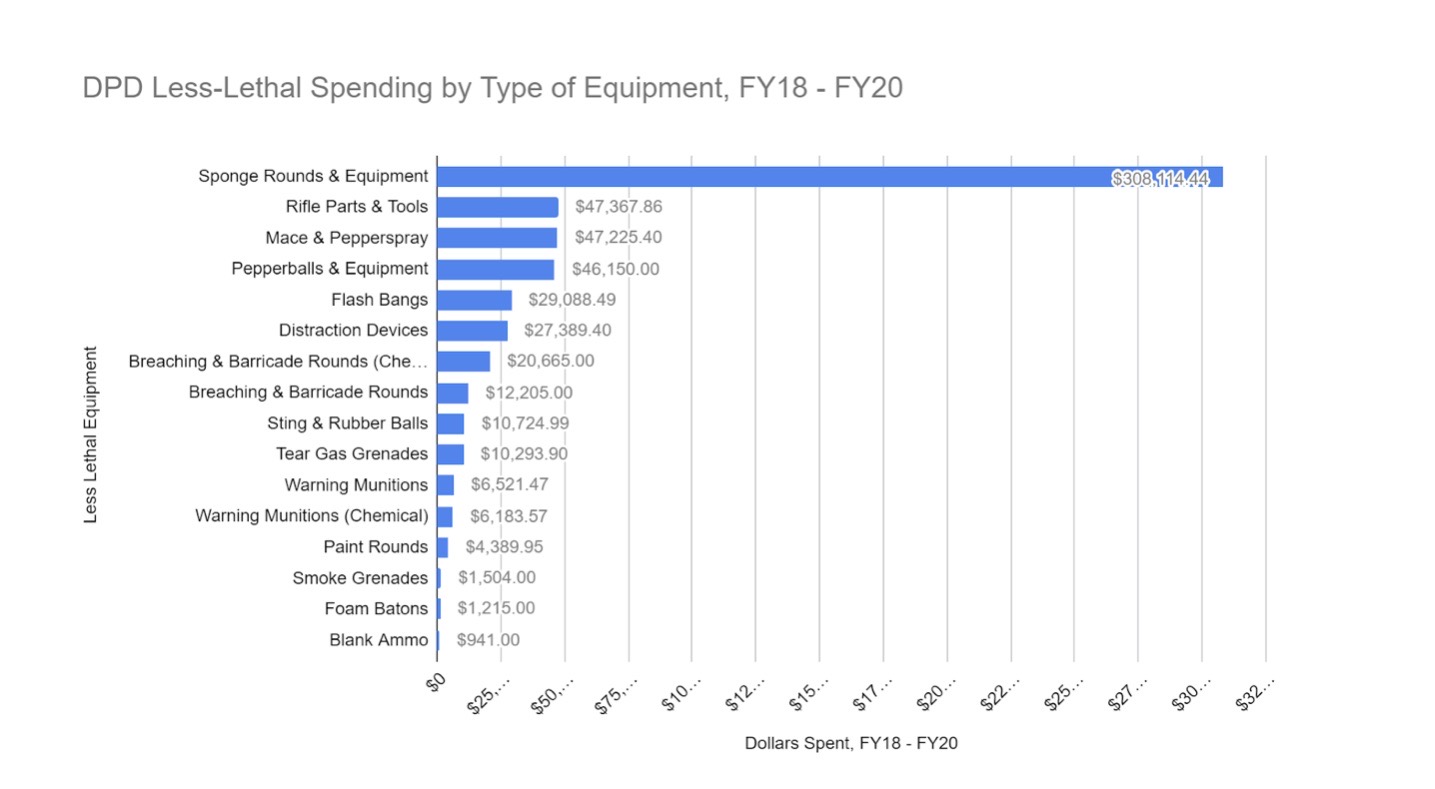 So: Why should anyone care about this?

On Wednesday, December 9, the Dallas City Council is set to discuss and potentially authorize a five-year, estimated $7.7 million master agreement for the purchase of additional lethal and “less-lethal” ammunitions. It is unclear exactly how DPD plans to spend the newly proposed agreement should it be approved, but it is not unreasonable to project that DPD will repeat past spending patterns on similar tools.

This raises alarms within and outside the walls of City Hall.

“I don’t understand why we need to set aside so much money for things that have been primarily used to harm people,” says Tramonica Brown, founder of the Dallas-based racial justice organization Not My Son.

According to DPD’s After Action Report from this summer, DPD SWAT deployed an estimated 652 projectiles during the first four days of protests — about 335 of which were deployed by a “40mm launcher” while the rest were “hand deployed.”

“I have serious concerns about the police using tear gas on our citizens during a protest,” Kleinman says. “It’s banned by the Geneva Convention for use in warfare.”

As Central Track previously reported, the after-action report adds a worrisome disclaimer: “Due to the urgency of maintaining order during the riots… exact numbers were not tracked and logged as in the normal issuance process.”

In other words, DPD doesn’t know exactly how many weapons or how much ammo was used during the protests. While the items listed in the after-action report’s breakdown of weapons used during the protests match those in the public record’s list of weapons purchased in the fiscal years 2018, 2019 and 2020, a few tools are absent from the released records, such as CN Gas and Skat Shells. Despite a few missing items, the information is detailed enough to answer protestors’ questions of “How much exactly is the city paying to tear gas or shoot us with ‘less-lethal’ objects?”

As it turns out, Geneva Convention-banned weapons are rather cheap. It costs less than $40 per tear gas grenade on average. Sponge rounds come out to about $57.25 per shot, factoring in equipment. The cheapest option appears to be pepper balls, which clock in at $3 per shot — equipment included.

An argument often used to defend DPD’s purchase of these weapons is that police need them for particularly dangerous situations, which Kleinman describes as “like serving warrants on suspected drug dens.”

While that may be true, police would likely deploy “barricade” and “breaching” rounds — used to break open doors or deliver chemical agents into homes during a raid — in those situations. Even so, such rounds make up less than six percent of “less-lethal” expenditures between the fiscal years 2018 and 2020. A similar amount is spent on flash bangs of various types, some of which are deployed at protests.

The nearly 100 pages of records Central Track obtained via the Public Information Act don’t just specify the processes by which DPD procures its weapons, but also details the department’s expenditures during the 2018, 2019 and 2020 fiscal years–  including what “less than lethal” items, at what quantity, at what cost, and from which distributor. We analyzed these items and them combined into categories and types to demonstrate how DPD spends its money.

If approved on December 9, the majority of the 2020 master agreement’s nearly $7.7 million-dollar sum will go to the Austin-based “public safety specialists” GT Distributors, Inc. The rest — an estimated $102,500 — will go to the Arizona-based law enforcement-firearm supplier Proforce Marketing, Inc., also known as ProForce Law Enforcement.

GT Distributors, Inc. serves as a distributor for hundreds of manufacturers of first-responder equipment, “less-lethal” weapons and crowd-control devices, including defense technology. As Central Track previously reported, nearly all identified rounds, tear-gas canisters and sponge-round cartridges found during and after the first four days of protests were manufactured by Defense Technology. DPD’s itemized list of “less-lethal” weapon and ammo purchases made in the fiscal years 2018, 2019 and 2020 confirms the department purchased most, if not all, of its defense technology weaponry from GT Distributors. 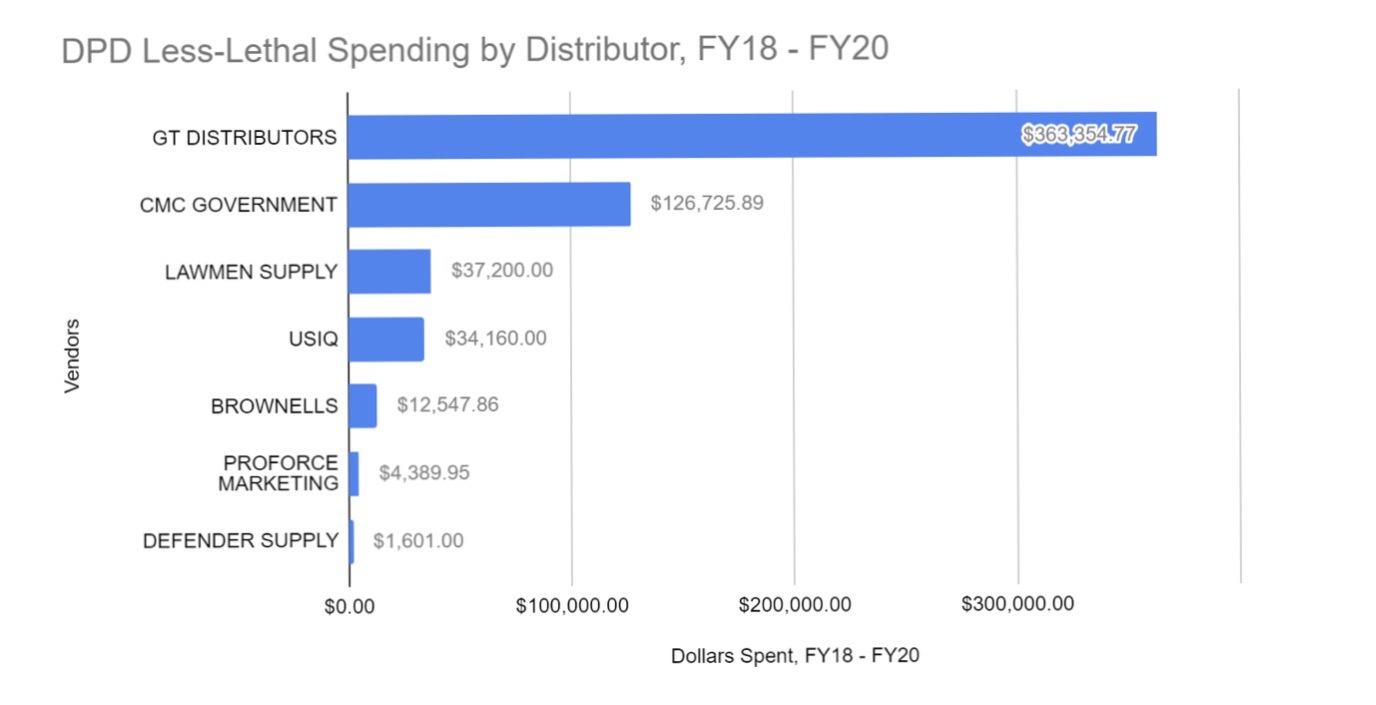 Central Track also previously reported that DPD uses a paintball gun designed by PepperBall to shoot — you guessed it – pepper balls. According to the itemized list, DPD purchased more than $35,000 worth of pepper balls from Lawmen Supply on June 2, 2020. Lawmen Supply is not listed in the 2013 master agreement. Neither is “CMC Government” (presumably CMC Government Supply, based in Addison), from whom DPD purchased thousands of dollars worth of crowd-control weapons manufactured by Combined Systems, Inc., also known as Combined Tactical Systems (CTS).

The Guardian, The New York Times and The Washington Post reported on the usage of CTS’ tear gas to suppress Arab Spring protests in Egypt and Bahrain. Amnesty International condemned the sale and delivery of thousands of pounds of CTS “ammunition” to the Egyptian government during the Arab Spring.

It is unclear what kind of agreements or contracts DPD has with either Lawmen Supply or CMC Government, much less PepperBall or CTS.

On the other hand, Tactical & Survival Specialties, Inc. is listed in the 2013 master agreement, which allocated $144,148 for the purchase of Simunition products from TSSi. (According to TSSi’s catalog, they sell Simunition blanks, marking cartridges, protective equipment and “weapon conversion kits.”) But in a February 2015 email exchange, a TSSi sales representative revealed to Ernie Lampkin, a certified professional public buyer in DPD’s Financial and Contract Management unit, that TSSi could not quote, much less sell, Simunition products to DPD without breaching TSSi’s contract with Simunition.

All of which is to say: None of this process is particularly transparent. The above information was only revealed by two separate public information requests placed in June and fulfilled in late September and early December, respectively. Moreover, it is not clear how many people are aware this agreement is up for discussion by the City Council on December 9; Brown and other activists involved in anti-police-brutality activism were not aware of this agenda item until approached for comment for this article.

You can read the full master agreements, renewals and lists of purchased weapons here.