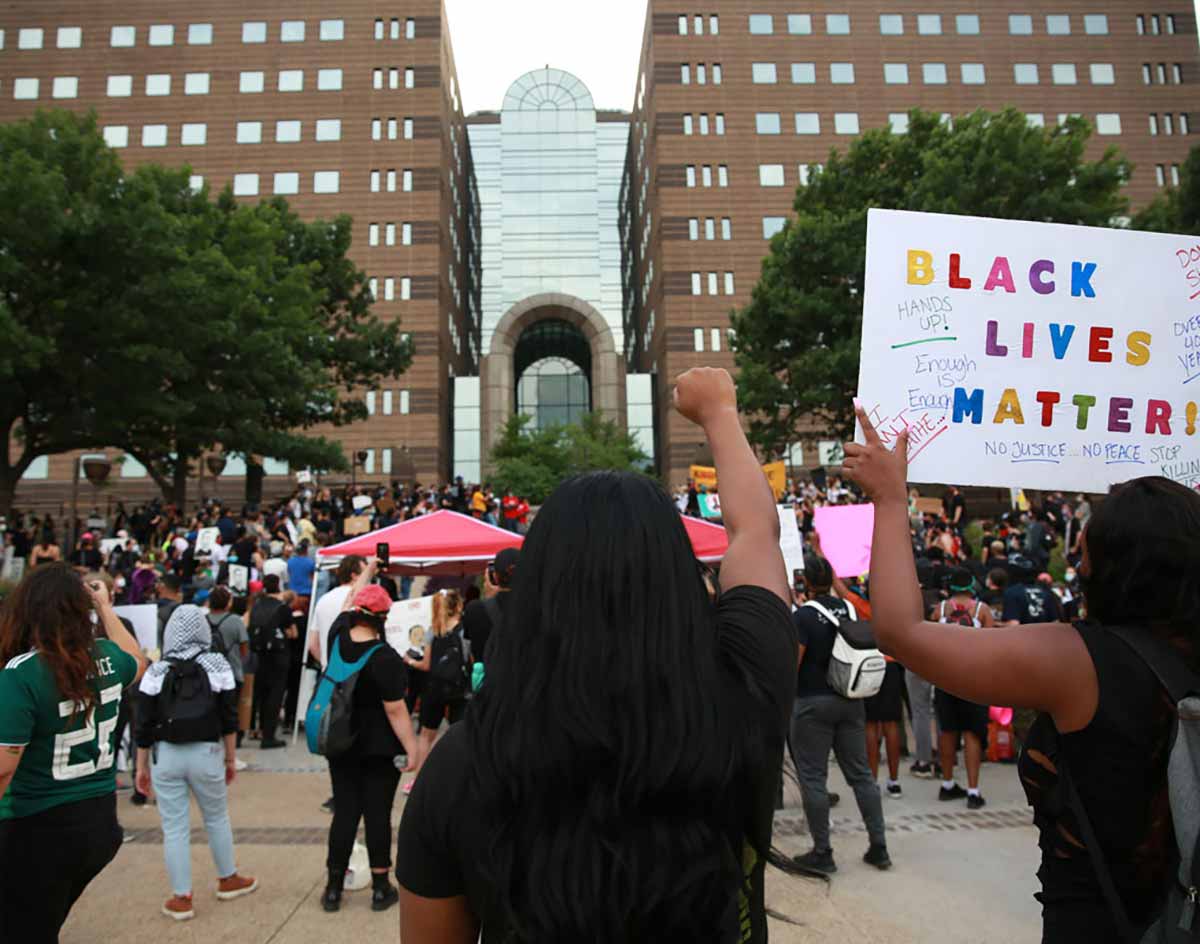 Protests against police brutality and systemic racism have continued in Dallas for more than 40 days and 40 nights straight at this point, having kicked off in the last weekend of May.

This 2020 round of civil rights protests — sparked by the murder of George Floyd at the hands of police in Minneapolis — is making concrete and coherent demands for reform at the local, state and national levels.

In Dallas, the list centers around: divesting from the Dallas Police Department, which receives roughly a third of the city’s yearly budget; reallocating hundreds of millions if not billions to affordable housing, accessible healthcare, public education, neighborhood revitalization, homeless solutions and community-outreach (and especially youth-outreach) programs; abolishing the police unions; holding law enforcement officials accountable for employing excessive force, brutality and violence; and getting a new police chief, dammit.

While bigger names like the ACLU are indeed involved in these efforts on grander scales, some newer and smaller grassroots organizations have too sprouted and made their mark on this movement through more on-the-ground work — and with nowhere near the same name recognition.

To that end, we’ve compiled here a list of 11 grassroots organizations that have heavily contributed to the ongoing demonstrations of the last 40-plus days. (While there are indeed more than 11 organizations at work in Dallas at the moment, we had to choose to cap this list somewhere, and 11 seemed like as good a spot as any — if only because, as many involved in the protests have said before, “Fuck 12.”)

In Defense of Black Lives Dallas

A member of the international coalition Movement for Black Lives, In Defense of Black Lives Dallas is itself a of local activist and community groups including BYP100, Mothers Against Police Brutality, the House of Rebirth, Democratic Socialists of America North Texas, the Palestinian Action Comittee of Texas and the Dallas Alliance Against Racist & Political Oppression (which itself is a chapter of the National Alliance Against Racist & Political Repression, an organization founded in Chicago, Illinois, in 1973 to amount organized action against injustices to individuals due to their race or politics). In Defense of Black Lives Dallas has hosted numerous rallies, marches and informational events across the city, including the more than 3,000-strong protest that started at Belo Garden and marched through downtown on June 6. More recently, Mercedes Fulbright (an organizer associated with BYP100) and Sara Mokuria (co-founder of Mothers Against Police Brutality) joined a 14-member working committee charged with proposing alternative first-responders and identifying areas to which cities should reallocate funds after defunding their police departments. The working committee comprises the Dallas County district attorney and six Dallas County city managers, plus faith leaders and activists from across the board.

Known for its controversial leader, community programs and protests against police brutality going back several years (including the 2016 protest that scattered after a lone domestic terrorist killed five police officers, and the 2018 protest held in the wake of Botham Jean’s murder by Dallas police officer Amber Guyger), Next Generation Action Network has most recently made a name for itself by leading the traumatic rally and march that ended in a mass-arrest of peaceful protesters on the Margaret Hunt Hill Bridge. Led by Minister Dominique Alexander, who was indicted on a felony domestic violence charge in late 2019 and whose protest tactics have been openly questioned by his peers, NGAN has come under fire since the so-called “ambush at Large Marge” with multiple Dallas organizers, protesters and journalists speculating Alexander lied when he implied that he’d verified his march path with city officials before marching down Riverfront Boulevard on June 1; they’ve accused him of walking protesters into a “setup” on the Margaret Hunt Hill Bridge for a self-serving photo-op. Though Alexander and NGAN have organized several peaceful rallies in the past weeks, three of their largest rallies have resulted in dramatic violence, which hangs over this group like a cloud.

Although the organization’s inspiration stretches back to the murder of Trayvon Martin, it wasn’t until this year — in response to Floyd’s murder — that native Dallasite and teacher Tramonica Brown decided to pull Not My Son together. Says Brown: “It was always a thought of mine. The George Floyd [murder], and everybody else who lost their son, it’s crazy. And you just don’t want to make that your son’s story line.” Since forming, Not My Son has been working with local elected leaders such as city council member Casey Thomas and state senator Royce West on police divestment and reform and community investment and transformation within Dallas. Not My Son has also begun drafting a police-reform bill with U.S. representative Michelle Beckley. Variety is the name of the game with Not My Son’s events, which have included town hall-style meetings, marches with elected leaders, a Juneteenth celebration, an Independence Day rally and a march to the polls.

Loosely affiliated with Not My Son — the group was recently founded by Tramonica Brown’s husband, Yaheim Israel — Watchmen is an open-carry Black gun association whose members have marched alongside various protests, such as Not My Son’s Independence for Who? rally on the Fourth of July, with their shotguns in hand and handguns standing by. That’s only part of the group’s focus, which is more broadly about community education and engagement — emphasizing constitutional rights and encouraging community participation in clean-up efforts. Obviously, they also provide protest security, while aiming to normalize the image of Black men with guns.

We Take The Streets (WTTS)

We Take The Streets is an informal group that began organizing protests in early June and has since marched (in groups ranging in size from dozens to hundreds) every day, always beginning and ending at City Hall. There’s no doubt that this loose and still-being-shaped collection of young twentysomethings are most to credit for the interrupted string of days in which Dallas has protested since May 29. As part of their efforts, these protesters have rallied and/or marched through Downtown, Uptown, Deep Ellum, Highland Park, Oak Lawn and South Dallas — as well as through stores, like Target and Whole Foods, without incident. Still, their primary tactic –taking over and temporarily shutting down intersections — has resulted in a number of issues that have placed strain on the group, including dangerous run-ins with aggressive drivers, marchers fainting due to heat exhaustion and tense interactions with armed state troopers.

Organized by a local photographer via Instagram, Pups Protest is an at least once-per-week gathering aimed at dog-owning allies with limited spare time and dogs to get out of the house. This group provides participants with dog bowls filled with water and treats, and keeps its march distances moderate so as to minimize puppy overheating. More recently, Pups Protest has collaborated with other local civil rights groups such as Not My Son, inviting organizers to speak to protesters and their pets under the shade of the trees just outside of City Hall Plaza.

Either in person or in photos of the Dallas demonstration, if you’ve seen yellow umbrellas bearing the names of victims of police brutality written on them in black you can thank the Umbrella Project for creating and supplying them. Led by a group of artists who have banded together and pooled their skills together to help create striking scenes at protests, their umbrellas initially represented 44 individuals who have died at the hands of Dallas Police Department officers. They have since expanded their collection to more than 300, now including names of victims of police brutality nationwide.

A number of beret-sporting groups have organized and participated in events across Dallas. These groups, thus far, have not protested while armed or open-carrying — but their names, symbols and political manifestos call back explicitly to the open-carrying revolutionary political groups that emerged in the 1960s and ’70s. Each focuses on a set of issues critical to their community, but recently these groups have aligned together behind Defund Police and Abolish ICE banners. These groups include the >Brown Berets, Red Handed Warrior Society, and the Black Panther-affiliated Huey P. Newton Gun Club (not to be confused with the New Black Panther Party).

Organized by Rakem Balogun, the same man who helped found the Huey P. Newton Gun Club, Guerilla Mainframe is similar to the Black Panther Party and MOVE in that its members provide martial arts- and weapons-training classes, hold clothing and food drives, distribute free groceries, host health clinics and HIV screenings, and offer classes on vegan living and political activism. In late 2017, the FBI arrested Balogun on a bogus charge of illegally possessing a weapon, for which he was detained six months after being deemed a threat to the community; meanwhile, the FBI combed his social media feeds for threats of violence, eventually finding that Balogun had made inflammatory comments about the 2016 killing of five police officers in Dallas. In time, his single, bogus charge would be thrown out in pretrial. It is generally believed that Balogun was the first Black activist whom the FBI attempted to prosecute under the artificial “Black Identity Extremist” label. Nevertheless, Balogun persists, and Guerilla Mainframe has continued holding food drives and feeding the hungry in South Dallas and Oak Cliff — an invaluable service in the time of COVID-19.

Initially formed out of Atlanta, Community Movement Builders is a “self-determining” organization advocating for the peaceful liberation of Black Americans as part of a “larger pan-African struggle.” They strive to create “liberated zones” in which the masses have near or complete control over institutions such as land, housing, and labor, and therefore near or complete control over their “socio-economic destinies.” Explains Davante Peters, one of Dallas’ Community Movement Builders organizers: “Investing in the community means… being autonomous to where we don’t have to depend on anybody — we don’t have to depend on the local government, we don’t have to depend on any political party — and to where we’re an autonomous people, and I mean ‘autonomous’ as a race.” Community Movement Builders is also petitioning to change the name of Lamar Street to Botham Jean Boulevard.

Hopefully not just a flash in the pan, United Justice League is an organization that has held exactly one event and was founded by Zachariah C. Manning, an aspiring Democratic politician in Dallas. Manning, in addition to having been a whistleblower in a potential case of DISD corruption, has primarily worked in real estate development. A simple search of his website fails to find any mention of de-funding the police department.