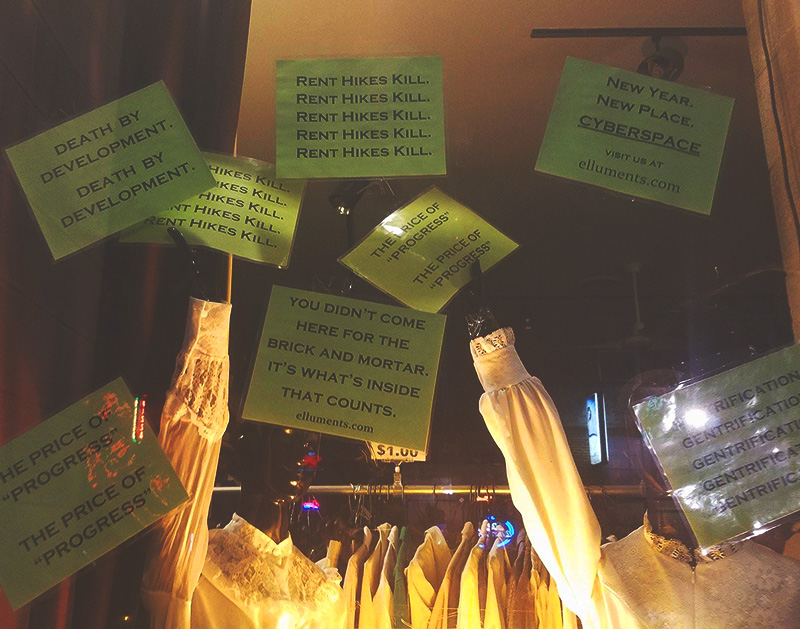 When Deep Ellum vintage shop Elluments shut its doors earlier in early 2017, it was, for some, a signal of the beginning of the end for the neighborhood.

The shop’s proprietor sure felt that way. In an update shared on the shop’s Facebook page, owner Felicia Dunnican blamed her shop’s closure on tripling rent prices that had been spurred by what she said was her landlord’s latest attempt to give Ellum “more of an Uptown vibe.” Meanwhile, as she packed up her goods, she did so behind a window she’d plastered with bright, neon green signs that featured slogans like “#deathbydevelopment.”

Reactions to Dunnican’s Facebook post were mostly sympathetic to her shop’s plight. But plenty of them took on a darker, doomier and gloomier tone. Read one particularly dire reply on the post: “Deep Ellum is Dying before my Eyes.. I’ve seen the Cycles and this time, there is no turning back… RIP DEEP ELLUM… you Will be Missed!”

But the “RIP Deep Ellum” crowd isn’t a new one at all. These people seem to pop out of the woodwork every time the neighborhood is in one of its quote-unquote periods of boom.

We’ve written about this Deep-Ellum-is-dead crowd before after first finding this 1991 clip of a then-frequenter of the neighborhood lamenting that Ellum has “gone from a very low-budget, tight group of people that all knew each other and hung together to, basically, yuppie infiltration.”

But while there was indeed a bust ahead – that era’s version of The Bomb Factory closed in 1999, followed over the next decade by the rest of the neighborhood’s biggest clubs, including The Gypsy Tea Room and Trees, also going belly-up – the downturn didn’t last too long. In fact, if history has shown us anything, it’s that Deep Ellum’s boom-heyday-infiltration-bust sequence is as much a part of this neighborhood’s DNA as its rich music tradition.

Look back throughout Deep Ellum’s history, and it becomes clear: This cycle plays out every 30 years, dating back to at least the 1920s.

“Even in its heyday during the 1920s, people were foreseeing the end of Deep Ellum,” writes Alan B. Govenar in his 1998 book Deep Ellum and Central Track before citing a 1925 Dallas Morning News article about the then-looming demise of Ellum, which at the time was signaled by white businessmen expanding their efforts farther east from Downtown down Elm Street: “The towers of industry, represented by the ever-extending sky line, are gradually crawling farther toward the vitals of ‘Deep Ellum’ and it won’t be long until the picturesque highway will be history.”

When the first leg of the Central Expressway opened in 1949, things started getting even slower. Writes Govenar: “By all accounts, Deep Ellum deteriorated in the 1950s and slowly the small businesses began to close.” The streetcar and railroads were axed for Central Expressway, which also sort of sealed off Ellum from the rest of Downtown.

By the 1980s, though, things slowly started to turn back around, and a 1987 Island Records compilation called The Sound of Deep Ellum put the neighborhood’s art scene back in the national spotlight. By the early ‘90s, a huge number of clubs had reopened, and major record labels were trolling the hood for new talent to sign.

Which brings us back to 1991, and that “yuppie infiltration” quote. Eventually, that young neighborhood worrier fears came true, and in the early ‘00s, Deep Ellum once again reverted to the ghost town that it resembled “before Russell found god.” For a minute, there was nary a place for bands to play in the area.

Then came 2009, when Trees reopened, followed by La Grange (now Three Links), Dada and, more recently, The Bomb Factory. A new-look Deep Ellum Live is even on the way back now, too. The bands started to return, and so too did the crowds, followed more recently by complaints that the neighborhood isn’t what it once was.

If anything, the contingent saying Ellum has lost its spirit at this modern moment are proof of the opposite. Every time the neighborhood has experienced a boom, dating all the way back to the ‘20s, there has been the good-old-days set predicting its impending demise — just as the small contingent of blind optimists touting that Deep Ellum is coming back exists during every period of bust.

To that end, it’s fitting that Govenar closes his book, which was written during the beginning of a downturn in the late-‘90s, with the following quote: “But in fact, nothing is going to revive Deep Ellum because it was a different world, one that existed because of an odd confluence of racism and tolerance, hard luck and opportunity, sadness and hope, desperate poverty and good-time Saturday nights. It is a world that will not come again, but one whose development attests to its enduring legacy.”

Thing is, Govenar’s own extensive research shows proves the opposite point — that Deep Ellum will forever find a way to blossom again in some capacity, as it indeed has.

Only to be followed, naturally, by people complaining about developers “Uptowning” their Deep Ellum.